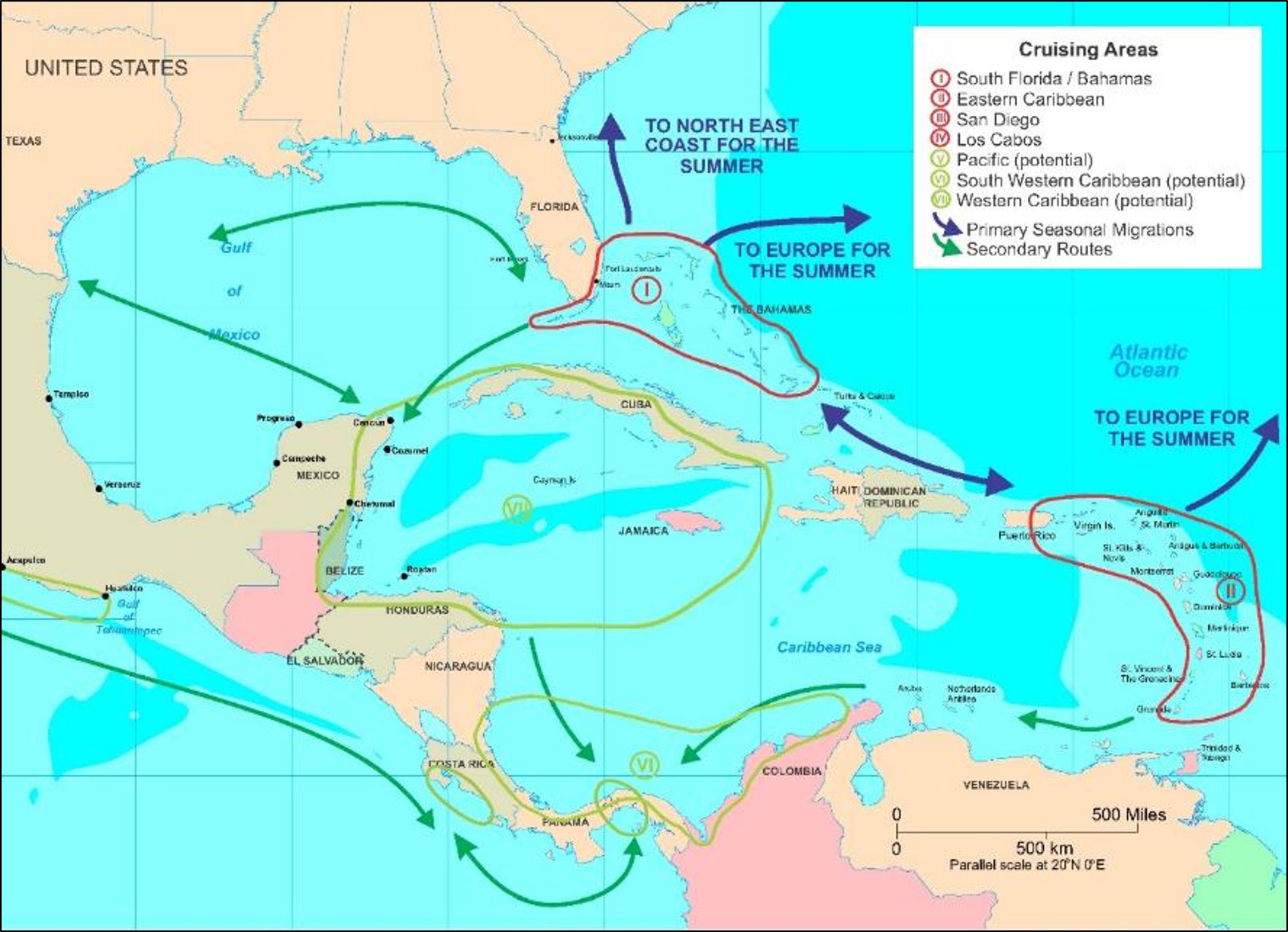 AIS Data and its Applications for Marina Studies and Development

Uses of AIS (Automatic Identification System) data by the recreational navigation industry have increased significantly in the last few years. Applications for marina design include evaluating design parameters driven by commercial fleets (e.g. wake impacts) or monitoring dredges during construction, while other applications involve evaluating recreational vessel data. This article will discuss some examples of AIS data analysis for recreational vessels in the marina market and feasibility studies, based on consulting studies and research conducted by Applied Technology & Management (ATM).

What is AIS?
AIS is an automatic tracking system that uses transponders on ships and data that is received by land-based stations or satellites. The system was originally developed for collision avoidance of commercial shipping, but it is now also used for maritime security, search and rescue, accident investigation, fishing fleet monitoring, and fleet and cargo tracking, among a growing list of applications. In addition to government data management systems, various commercial services provide data and analyses to end-users.

The International Maritime Organization Safety of Life at Sea (SOLAS) Convention introduced the first mandate for AIS transponders in 2002. SOLAS generally requires AIS to be fitted aboard international voyaging ships with 300 GT or more, vessels more than 150 GT when carrying more than 12 passengers on an international voyage, and all passenger ships regardless of size. National authorities are increasingly adding additional requirements.

There are two types of transponders, A and B, which transmit different types of standardized information, with Class A being more detailed. Among other requirements, the U.S. Coast Guard requires Class A transponders in vessels more than 65 feet and in towing vessels more than 26-feet that are engaged in commercial service, self-propelled vessels engaged in dredging operations under certain conditions, and all self-propelled vessels certificated to carry more than 150 passengers. AIS Class B devices are permissible in lieu of an AIS Class A device on fishing industry vessels and passenger vessels for less than 150 passengers. The U.S. Coast Guard explicitly states in its rules that the AIS system is primarily intended for use to maintain a periodic watch for AIS information by responsible crew members, so safety is still considered the primary function of this system. While most recreational vessels are not required to carry an AIS transponders, many of them carry Class B transponders for security or safety reasons.

Data for Recreational Vessels
The use of AIS data for recreational traffic analysis is still in its infancy, and ATM has been working on innovative approaches. One of several limitations to using AIS data is that using a transponder is not mandatory for most recreational vessels. That means that data analytics are insufficient, and pure quantitative analysis may result in erroneous conclusions. ATM has seen that the use of AIS transponders by recreational vessels is prevalent under some conditions. However, the use of AIS data still requires a strong conceptual framework and proper interpretation by experienced professionals.

When collaborating on a research paper for the PIANC World Congress, data was received from the Panama Canal Authority (ACP) on recreational vessels transiting through the canal. This data allowed the opportunity to cross-reference it with AIS data, which provided conclusions regarding the interpretation of AIS data analysis.

ATM conducted an analysis that compared ACP and AIS recreational vessel data from March 4 to June 2, 2017. Within that period, 410 yachts were recorded transiting the canal by ACP, while only 224 of those vessels are present in AIS records. Further analysis shows that the percentage of vessels carrying AIS transponders increases significantly with the vessel size. While only 52 percent of vessels under 100 feet transiting the canal had AIS transponder signals, 80 percent of the yachts more than 100 feet were captured by AIS signals. For vessels more than 120 feet in length, AIS records capture between 85 percent and 90 percent of all vessels. For the total data set studied, which included vessels under 50 feet, the percentage carrying AIS signals for all vessels was 55 percent.

As a by-product of this analysis, ATM was able to get a sample to evaluate the origin and destination of the recreational vessels that transit the Panama Canal. The company was able to extract some conclusions from AIS data, even if it is no longer recorded officially by ACP.

Large Scale Regional Migration
Large scale regional migrations are part of some navigation patterns of recreational vessels, such as sailboats that cross the Atlantic every fall to spend the winter in the Caribbean. Major migrations also include recreational vessels that “migrate” north and south seasonally along each coast of North America.

A large migration of sailboats takes place every year from the Canary Islands and Azores into the Caribbean. Vessels concentrate in those primary waypoints and cross the Atlantic between September and December every year. A portion of those return in the spring via Bermuda, some remain in the Caribbean (typically in dry storage) and many others continue their journey around the world by crossing through the Panama Canal into the Pacific. ATM used AIS to validate its past research, based on interviews and qualitative references with semi-quantitative data in ways that could not be done in the past.

During the last couple of decades, the seasonal migration of superyachts (i.e., yachts of typically 30 meters length or greater, about 98 feet) have also gained the attention of consultants and designers. Superyachts have specific characteristics and behaviors, which drive marina planning and operations. By any definition, superyachts are an important segment for the yachting business and for marina design. The Mediterranean harbors the largest concentration of superyachts in the world, and some of those spend the winter outside of the region, primarily in the Caribbean. While the superyacht migrations from the Mediterranean have been studied in detail recently, mapping of these migrations in the Caribbean can be traced to studies performed more than 15 years ago. ATM first developed this graph for market studies in the early 2000s. That early analysis, which is still relevant and widely used with minor updates, shows key migration routes in and out of the Caribbean. In various AIS studies performed by ATM, it validated and expanded upon these older graphics of superyacht migratory routes. 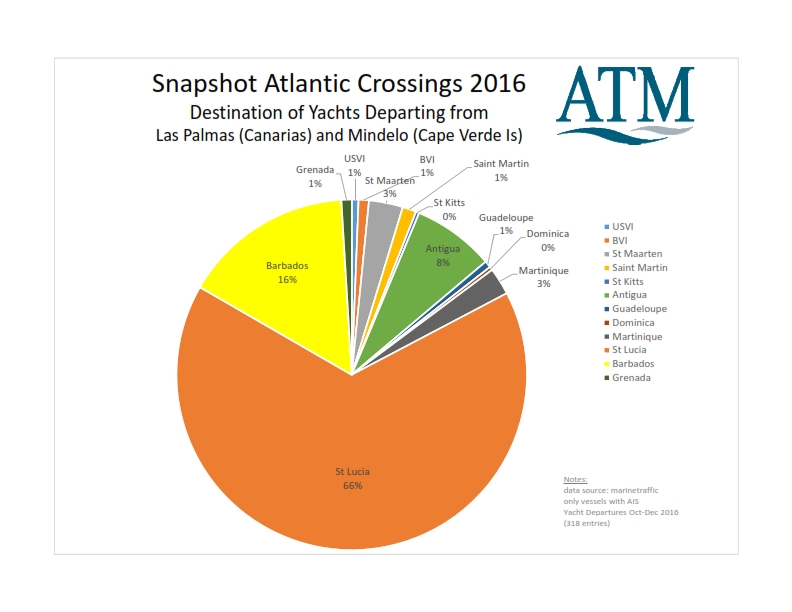 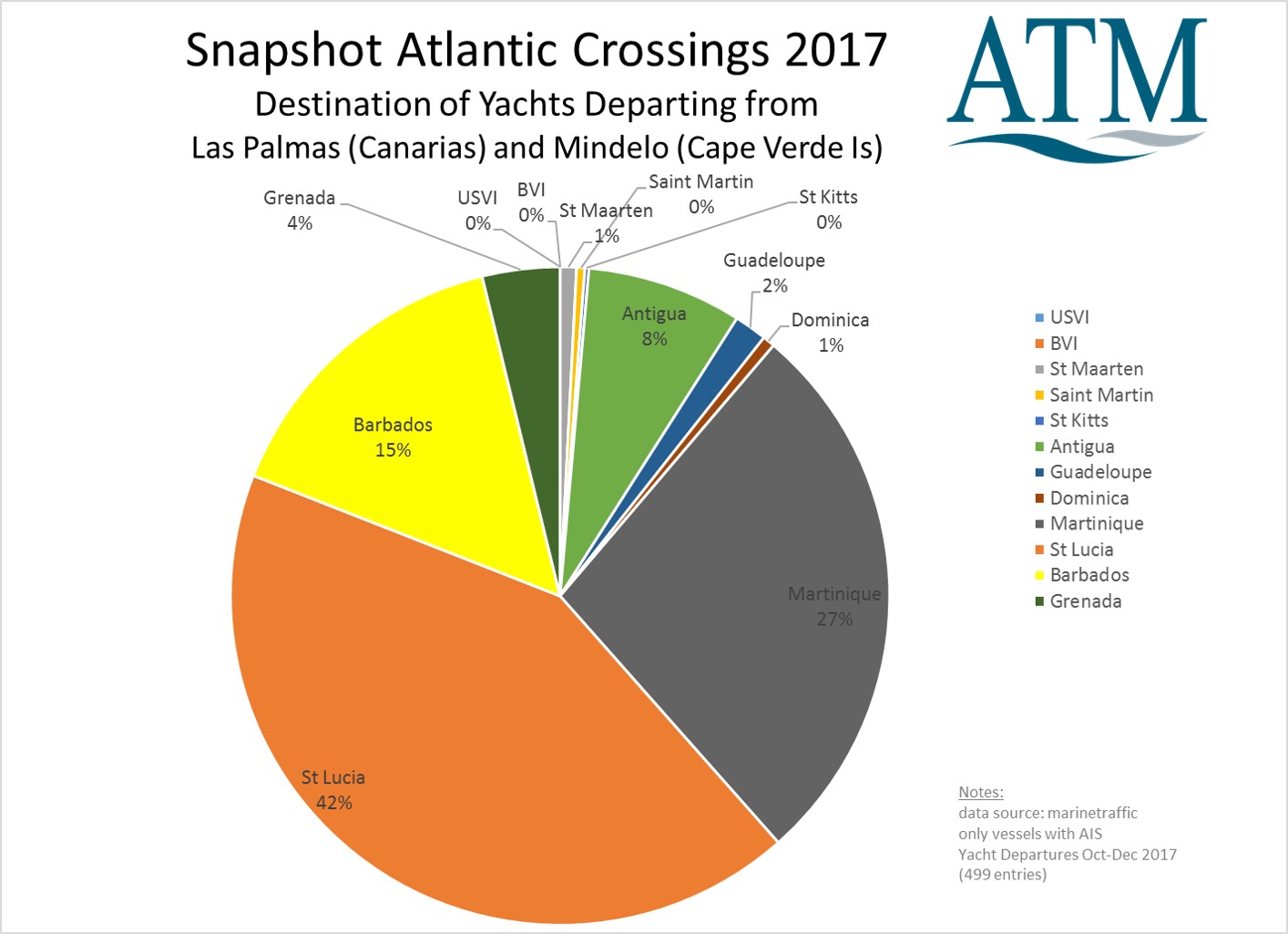 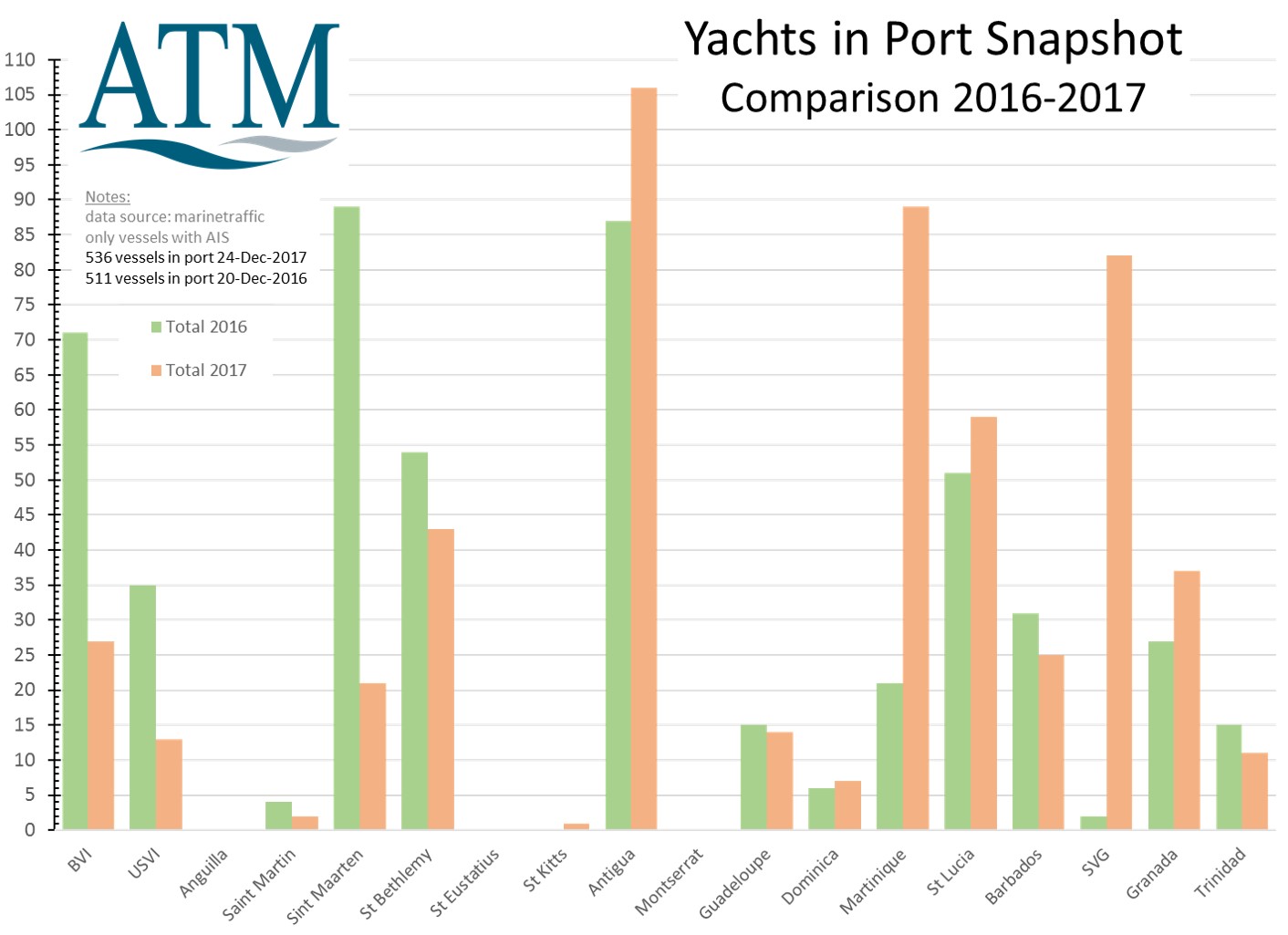 Caribbean Cruising Resilience
After the damage caused in the Caribbean during the harsh 2017 hurricane season, many questions were lingering regarding the 2017/2018 cruising season in the eastern Caribbean. Will sailboats and superyachts be migrating to the region as in previous years? Where will they go? Preliminary analysis of AIS data very early in the season showed that there were as many yachts in the Caribbean in the post-Irma and Maria season as the previous season, but they had shifted south. This preview was validated by facility feedback provided in 2018. 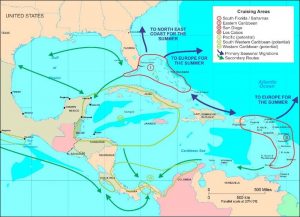 between the U.S. Virgin Islands and Trinidad for a market study in 2016. Using this baseline data, it repeated the analysis to compare one day in the week before Christmas in 2017 and 2016. The AIS data from December 2017 showed a similar influx of recreational vessels to the region as the previous year.

However, much of the vessel activity had shifted south compared to previous patterns. Martinique and the Grenadines appeared to have received significantly more vessels in 2017, while the U.S. Virgin Islands, the British Virgin Islands and St. Maarten were experiencing losses. This data also showed that while numbers of recreational vessels under 30 meters (about 98 feet) were strong, there were marginally fewer superyachts in the region during the season.

Again in this case, analyses of AIS data have shown to be useful to illustrate broad recreational navigation patterns. However, careful interpretation is required and validation by other sources is strongly encouraged and required. In other words, AIS data analysis is “just one tool” for marina and nautical tourism market studies – still an art as much as a science.

Future Trends
ATM has a long tradition of leadership and innovation in the marina business, especially as it relates to the integration of market studies in marina planning and financial studies leading to facility design and due diligence. The innovative analyses outlined here are just a preview of a trend. There are multiple opportunities to continue expending the use of AIS data in the marina industry.

Institutionally, ATM also promoted the creation and supports a PIANC Working Group to study the use of AIS data in the industry. The Working Group is expected to collect international experience in the use of AIS data for recreational navigation industry uses, such as the one described here, and to learn how other industries are using AIS data, to compile recommendations.

Esteban L. Biondi wrote this article with contributions from various ATM marina team members. Biondi is associate principal with Applied Technology & Management. He can be contacted at ebiondi@appliedtm.com.