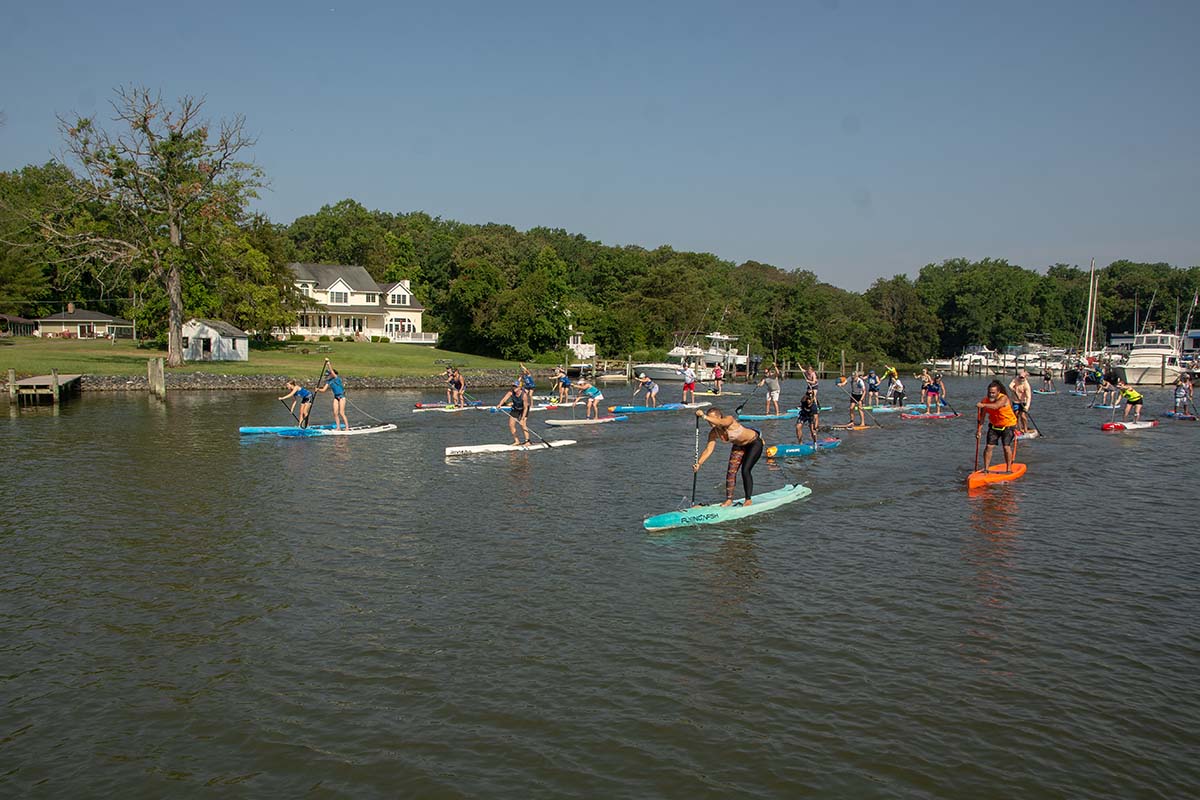 Baltimore Boating Center Focuses on Family, Fun, and the Future

Baltimore Boating Center in Essex, Maryland, is the epitome of a family-run business. Situated on the Sue Creek, off Middle River and the Chesapeake Bay, this inviting marina has a storied history. Jim and Doris High opened the marina in 1965. Their five children grew up living the marina life, until the couple decided to sell it in 1987. The marina was resold again in 1991 to Doug Hanson. He ran the marina until 2007, when the Highs now grown children decided to return to the family business. Son Jim High and his four sisters purchased the marina from Hanson and got to work, bringing their parents’ dream of a family-run marina back to life.

High said Hanson did the best he could to run the marina, but age had caught up with him. Sadly, when Hanson retired and the siblings took control of the marina, the facility was in poor condition. Littered with more than 50 abandoned boats, aging infrastructure, and trash in every building on the property, the remaining customers were frustrated to say the least. The new owners, led by High as general manager, and sister Brenda Wilmoth as sales manager, spent the next 15 years completely transforming the marina to become a place where employee morale is high and boater satisfaction is better than ever. Congratulations to Baltimore Boating Center, the Marina Dock Age 2022 small Marina of the Year.

Focusing on Facility Improvements
To make the marina profitable, High got to work on the docks and out in the yard, while Wilmoth started tackling the administrative side of the business. “I immediately started cleaning up the property, getting rid of the junk boats, installing new electric and plumbing, and repairing finger piers,” High said. “Brenda took control on the inside, restructuring all the administrative procedures and she set out to build a brokerage business to bring in additional revenue. It was tough competing with her! We now have multiple boat brokers working out of Baltimore Boating Center.”

By 2011, the facility and morale had improved significantly. The slips were full and there were several boat brokers operating out of the marina. Over the next few years, the marina received a series of upgrades. Modernization efforts have included new retention walls, a new pier, and new boardwalks. In recent years, Murphy Marine Construction has replaced the old fixed docks with new floating docks, as well as new bulkheads, finger piers, and concrete pilings.

Focusing on Profit Centers
In addition to the physical improvements at the facility, High and Wilmoth have initiated the introduction of several new profit centers at Baltimore Boating Center. Ten years ago they started their rental business with the purchase of 30 paddle boards. “We got into renting paddle boarding early and we kind of captured that market,” High said. “So, for many years we were doing nearly 3,000 paddle board rentals each summer.”

While those numbers have declined slightly, High explained that their marketing efforts have been redirected since introducing kayaks and five pontoons to the rental portion of the business. “We have the same number of customers enjoying the waterways, but just in different ways,” he said.

Baltimore Boating Center also offers fishing charters, sunset cruises, camps, and sailing lessons. Partnering with Freedom Boat Club has also brought in additional revenue. The members-only club operates five boats out of Baltimore Boating Center, with plans to add more boats over the next year. “We’ve been in partnership with Freedom since 2015, but I have known about their business model for more than 20 years,” High said. “I feel very strongly that it is a good model for the younger generation or those people who want to experience recreational boating but they don’t have the time to own a boat.”

Baltimore Boating Center’s most recent addition is Charly’s Sue Creek waterfront restaurant. The ribbon-cutting ceremony for the high-end American cuisine restaurant took place last October. The marina partnered with Ryan Perlberg and Jesse Vann to open the new restaurant on the property. High said the family never considered the fact that a restaurant might be an additional revenue source for the small, family-owned marina. “Ryan and Jesse approached us with the idea,” he said. “And as they presented the plan I could immediately envision their idea and why it would benefit the marina and the surrounding community.”

The original service department and business offices were moved to accommodate the new restaurant. In addition, the service department is now leased out to Diversified Marine Services, an Annapolis, Maryland-based service center that offers boat maintenance, repairs, restorations, and installations. Detailing and shrinkwrapping are handled by 15-year tenant Blitz Mobile, which is owned by Wilmoth’s son, Joe Riechert.

Focusing on Environmental Initiatives
The marina’s impact on the environment has also been an important component to overall operations at Baltimore Boating Center. Just as vital as the facility’s infrastructure, High and his siblings have made sure to incorporate a series of environmental initiatives into their operating plan. When they first purchased the marina they immediately started recycling aluminum and zinc, which led to the installation of a Clean Burn furnace that would burn around 1,200 gallons of used motor oil every winter to heat buildings on the property. Today, the facility also recycles stainless steel, steel, wood, and paper. When the restaurant was built, the Clean Burn unit was removed and the marina began using Clean Harbors for oil and fuel removal.

The marina also eliminated the use of herbicides and pesticides and participates in the Marine Trades Association of Maryland’s shrink wrap recycling program. The marina offers recycling bags to their boaters for a nominal fee and explains how to recycle the shrink wrap. “We let everyone know that they can’t place their shrink wrap in our dumpster. About 75% of our boaters take advantage of the program,” High said.

High admitted that discarding used shrink wrap is a major issue within the recreational boating industry. “I wish there was a better alternative but it is a difficult situation. The use of plastic is necessary in the mid-Atlantic and northeast because it just protects your boat so much better. If you don’t shrink wrap, it is cost-prohibitive to see your canvas ruined.”

Baltimore Boating Center works in many ways to protect its waterfront. In an effort to control runoff from the marina, the facility used grant funding to build a rain garden on the property. A bioremediation pond was also installed to create healthier soil and reduce the amount of sediment flowing into the water due to construction in the area. High also worked with Best Management Products, Inc. to install its SNOUT water quality device into a wash water filtering system at the marina. The SNOUT is a vented fiberglass water quality hood that is installed over the outlet pipe in a storm water structure that skims oils, floatables, and trash off the surface water, while letting settleable solids sink to the bottom. The cleaner water exits from beneath the SNOUT. “The system works incredibly well,” High said. “Marinas are the last line of defense before trash and other pollutants enter the waterways. We take pride in the fact that we have the ability to protect our waters.”

These innovative initiatives culminated in Baltimore Boating Center becoming a Maryland Certified Clean Marina in 2012. Achieving this certification was a priority for High and his siblings. “Each winter I attend seminars to stay current on environmental practices to continue to make our marina more clean,” High said. “It is cleaner than it has ever been and we are very proud of those achievements.”

Focusing on Customer Service
Customer satisfaction is a central focus of the marina. The facility hosts several gatherings and events throughout the season, which build lasting relationships between the marina staff and customers. When the marina sends out slip renewals at the beginning of each year, they include incentives such as tickets to the Chesapeake Bay Boat Show or gift cards to local restaurants. “This gets people thinking about boating season and helps support the community,” High said.

Events like the Chesapeake Bay Boat Show have proven to be a lucrative way to increase business and recognition for Baltimore Boating Center. Over the years, the marina has hosted and participated in a variety of events including the boat show, the Middle River Dinghy Poker Run, several raft-ups, Fourth of July fireworks events, and the Middle River Lighted Boat Parade, which has grown to become the largest lighted boat parade in the Mid-Atlantic. “We had over 90 boats signed up to take part in the 2022 parade,” High said.

Focusing on the Future
Despite all the success, Baltimore Boating Center still faces its share of challenges, with water depth being the more difficult issue to overcome. A dredging program conducted by Baltimore County ended in 2008, forcing property owners to apply for permits to dredge their waters. Due to the expense, High plans to dredge the marina slips and lift wells every two years. “The whole area is getting more shallow,” he explained. “This is not a fresh water river, this is brackish water, with more silt entering the basins wherever there is construction.”

As for now, Baltimore Boating Center is gearing up for another busy season on the water. In order to carry the marina into the future, Perlberg and Vann have taken ownership of the facility, with High remaining as minority partner. High is excited for this next chapter. “Ryan and Jesse’s determination and motivation are going to keep Baltimore Boating Center young and healthy for years to come.”