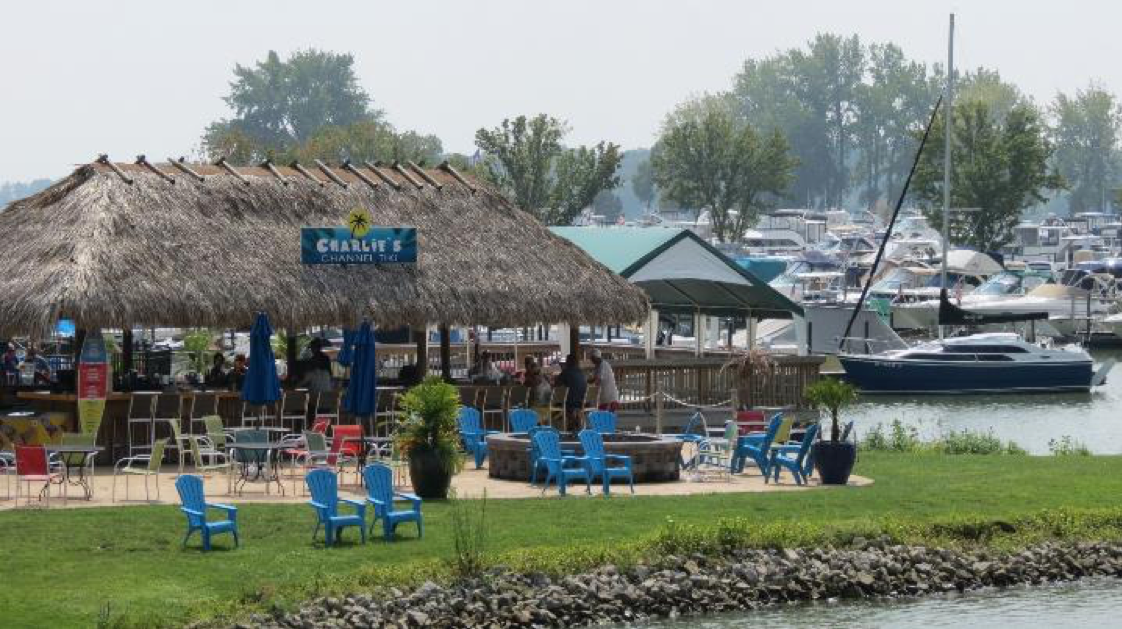 Drystack for Boats with Towers 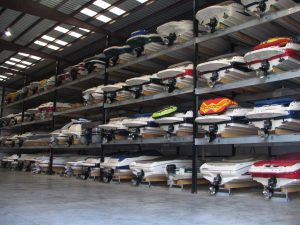 At the Port of Kimberling Marina & Resort in Kimberling City, Missouri, its nearly 400 drystack spaces are its premium service. The 1,400-slip marina, including 1,000 wet slips, also has a luxury lakefront hotel, cabins, and RV and tent camping sites at the resort. In addition to wet and dry storage, the marina also operates a boat dealership and rental services.

At the dealership, the marina noticed something about the boats it was selling. “We hadn’t sold a fiberglass boat without a top in a long time,” said owner Ryan Hamilton, who recently purchased the marina from his parents, Kelly and Randy. The top level of the drystack building could store some boats with towers, but when it was time to expand, Hamilton had the towers in mind. He also knew what a pain it was to remove towers, so boats could go into dry storage, and surveyed his customers about their willingness to pay more to keep the towers on. Of course, many welcomed the option. Last year, the marina added 72 additional dry storage spaces, and 36 of those spaces include the vertical room needed to store towers. Customers pay a $300 upgrade fee to store their boats with the towers.

The dry storage area also got some other much needed renovations. Although the drystack was the marina’s premium service, the parking lot and docks didn’t represent that feel. The dusty, gravel parking lot was paved. The wooden decking on the nearby docks were replaced with composite and widened, so boaters could load more easily. 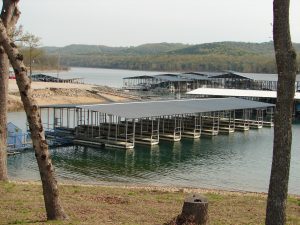 managed lake won’t allow for much more expansion, so many resorts do not have enough slips for boaters, so demand is high in the area.

The grants require a lot to get through the process, Hamilton said. In Missouri, BIG money is administered through the Missouri Department of Conservation. The process requires working through two layers of approvals, but the dock was rented and full even before installation was finished last summer.

The marina is also adding to the rental fleet. It took over the business from a third-party operator in 2017 with 10 pontoon boats. In 2018, it added another four pontoons. The facility’s annual return on investment analysis continues to show its rental business at the top of its profit centers. Hamilton said the marina will continue to add boats each year, until that number drops, signifying that local demand has been met.

A boat club is also probably in the near future for the marina, which is currently researching options and plans. From the dealership to rentals to slips, the marina satisfies many different types of boaters and helps to feed many of its own profit centers. A boat club is the next logical step, especially since the marina already has the needed infrastructure.

Extending the Shoulder Season
Hamilton is also always trying to capitalize on the shoulder seasons, those times before and after the bulk of summer. “Summer is getting shorter,” he said. “By the time school gets out, you don’t get busy until the second week of June, and by the second week of August, it’s done.” Trying to attract more customers during that longer shoulder season, in April and May and late August to September has been successful for the marina.

“We’re on the KCBS (Kansas City Barbeque Society) barbecue tour,” Hamilton said. He said the marina works with local agencies to push economic development in the area, and gather prizes and sponsors for the tournament, which happens the third week of September. “It brings a lot of people in, when we wouldn’t normally get them,” Hamilton said.

In the spring, the marina is active with bass tournaments, which fill a lot of transient slips and sell a lot of fuel. The challenge with fishing tournaments, Hamilton said, is they run on a circuit. They like to run for one or two years, then move locations. They might eventually come back, but it’s not every year.

With good planning, marinas can organize various tournaments year to year to bring sportfishing events to the property each year. Hamilton has worked with the local Chamber of Commerce and other businesses in the area to support fishing tournaments as well. The area houses a large Tyson Chicken plant, which is part of the Tyson Bass Association, and the marina has worked with Tyson to host its local tournament.

Local partnerships have brought a lot to the marina. “We don’t always have the idea,” Hamilton said. “We just have the property and the resources.” Oftentimes, it’s somebody else’s idea that ends up benefitting the marina. 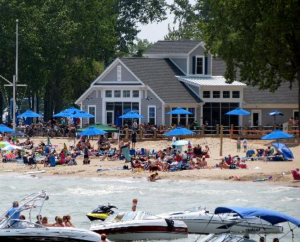 Bay Point Resort and Marina started as a beach resort, and the marina grew over time. For decades, the marina has offered social and campground memberships. All customers pay the “resort fee,” depending on what services they use. Slipholders become members first, then rent a dock for the summer.
Customers can also purchase just the social membership, which provides access to the property, the restaurants, events, resort store, outdoor bars, golf course, beach volleyball, basketball court, and a water taxi to Cedar Point Amusement Park and the city of Sandusky. The marina limits its social memberships to 600, and maintains a waiting list for that service. Over the past few years, the social membership service has especially grown, increasing by about 25 percent since 2014. Customers can also purchase a separate membership for just the pool or other services. 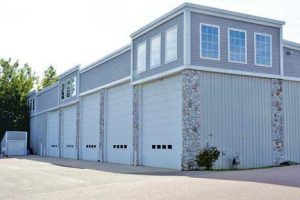 Previously, the marina stored its hazardous waste materials in the heated indoor storage building, about 22,000 square feet. It didn’t take up a huge amount of space, but some, which was pretty valuable to the facility. “Our indoor heated storage is worth $875 per square foot,” said Steve Linton, general manager at Pikes Bay Marina. The area also seemed to grow, no matter how much the staff kept after it to keep it clean.

“We needed to reorganize the whole area from a safety point of view,” Linton said. Flammable liquids like used oil and rags and filters shouldn’t be stored near millions of dollars’ worth of boats.

The new waste containment shed cost the marina about $4,000, plus the cost of a concrete pad. A local lumber yard custom built the 10- by 16-foot shed. “In two seasons, it would pay for itself, where we gained revenues in the storage building,” Linton said.

The separate building is easier to organize and keep clean, he said, and it takes up a smaller footprint. The shed is primarily used for used oil, used antifreeze, filter, rags and absorbent pads. Some extra shelves in the building house containment booms for spills or storms. The building also houses a caddy with 10-gallon fuel jugs and a hand pump for filling golf carts, hydraulic trailers. It has a similar set up for diesel fuel to power the travel lift and tractor.

Each barrel or dumpster is stored on a pallet with a catch to collect any spills. Signs on each indicate what is stored in each, and additional signs outline hazardous waste definitions and procedures. Boaters do not use the shed, but can drop of materials outside for employee to dispose of later.

“We still have the challenge of people dropping things off at night,” Linton said. They have a similar issue with the recycling area, where outsiders come in to dump material. The marina is thinking about a video camera security system to help watch these areas.

When the barrels are full, a recycler hauls them away. The marina labels each barrel with the start date (for filling) and the date the barrel was filled. The waste materials are heaviest in the fall, when the marina pushes oil changes.

“We put out a letter in August to boaters to get your oil changed now before haul out,” Linton said. With a 200-gallon capacity used oil barrel, it might get emptied two or three times during that busy fall period. Filters and absorbent pads are typically hauled away two to three times a year.

The marina’s recycler will haul away more than 200 gallons of used oil for free, but filters and absorbent pads cost a couple hundred dollars per barrel to haul away.

To compensate for that cost, the marina imposes an environmental fee on boaters, a flat rate charge for oil changes. It doesn’t cover everything, including those boaters that do their own oil changes and drop off the materials in-house, but it helps cover most of the cost.