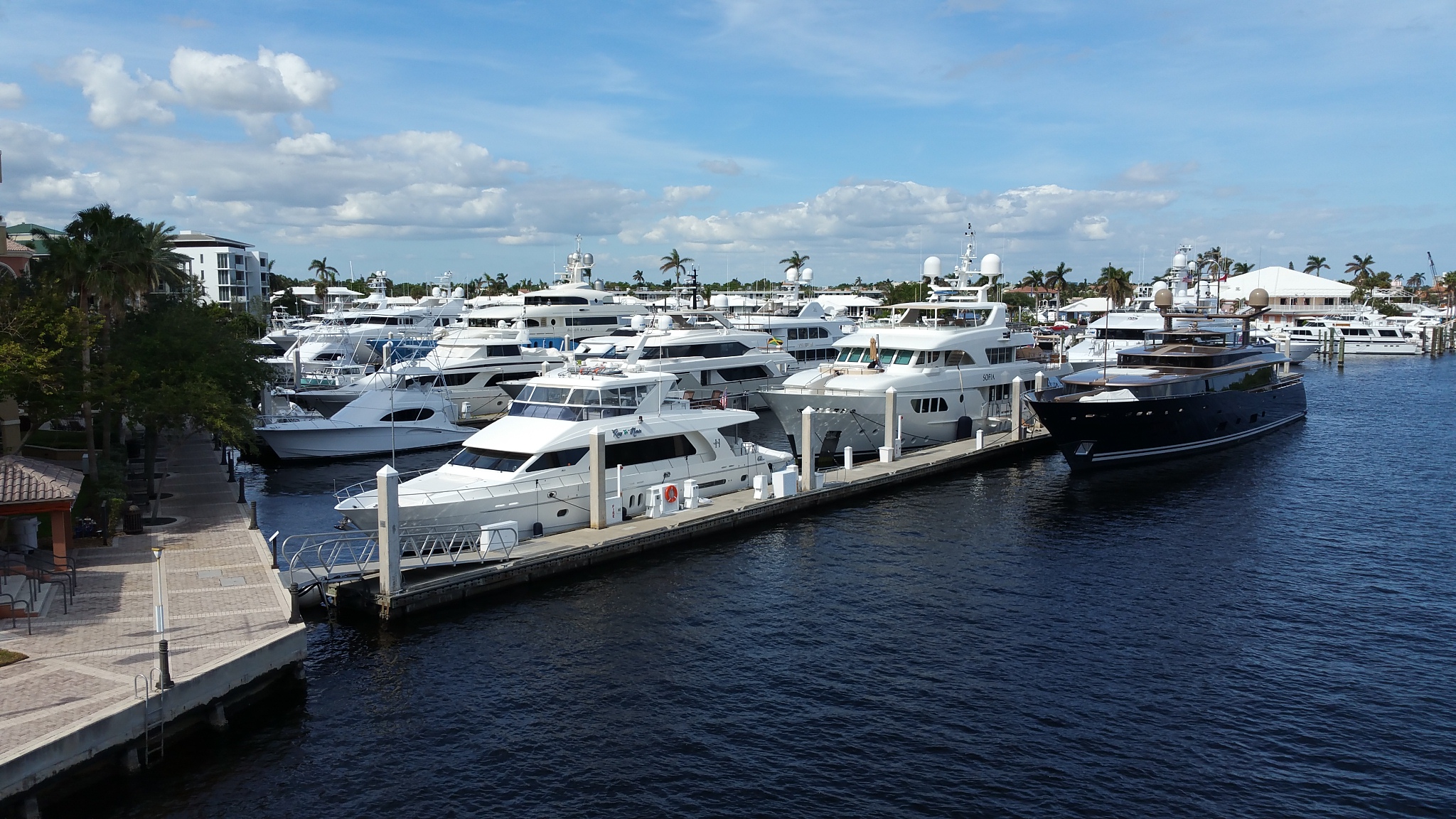 For years I’ve been saying that people want to go boating to get away from it all but want to bring it all with them. That statement is even more true today. Not only are boats getting longer, wider, and deeper in draft, but they are also being outfitted with every imaginable creature comfort – from electronic devices to full-fledged bathrooms (not sure we can call them heads anymore) with marble tile and gold fixtures, and many with tubs as opposed to tight curtained showers. We are told that there is more wiring in a 40-foot yacht than in the average three-bedroom house.

Twenty-five years ago the sweet spot in recreational boats was typically in the 28 to 35-foot boat length range, while today it appears to be more in the 40to 50-foot range. In the same period on landlocked lakes with deep water, a boat of 40 feet or above was considered humongous – today, boats over 50 feet are no longer an oddity. And of course, the number of megayachts and superyachts in the world, while still a small number compared to the overall number of boats, has increased more than most might have thought possible.

There is no question that the larger boats, whether from 40 feet to over 500 feet, draw in other boaters as well as the public in general. This interest together with the support and services the bigger boats require can translate into higher revenue streams from raising slip rental fees, to sales of fuel and other profit centers, including the ship’s store, food service, etc. Keep in mind, though, that the approach taken must be cost effective.

As boat sizes have changed, the cost of the boats have gone up tremendously, and both the demographics and types of boaters have changed dramatically. Boat owners are now more demanding, have higher expectations, and have less overall boating knowledge and experience.

All these happenings present significant opportunities and challenges to marinas. As the demographics of boaters are changing so is the economic capacity of the boat buying public. With the higher disposable income needed to purchase the boats of today (and tomorrow) often comes the ability to pay higher fees to the marina for docking and other services. We have found that boaters are willing to pay higher than traditional rates if they perceive value for what they are paying. Like the wide range of pricing from the five star down to the one and two-star hotel, or from the top of the line luxury automobile down to the economy models, there are opportunities at all levels of marinas and sizes of boats depending upon what is offered and, more importantly, what the customer perceives as the value of what is being offered.

The more expensive and larger the boat the more customers tend to be concerned about that value, and the more the initial expense for the marina to provide the upscale facility for the upscale boats. Unfortunately, the industry, with some notable exceptions, has long suffered from undercharging for its services. One such exception is a marina chain that took a different approach and typically has charged around 20% above the surrounding market. Noted for their exceptional customer service and high quality and attractive physical plant, not only were they able to build up their customer loyalty, but they became perceived by customers and non-customers as the premier marinas in their respective areas. Even in down markets the pricing differential could be maintained and the marinas were full while there were high vacancy rates in other lower priced marinas.

In considering accommodating larger boats it is advisable to give some meaningful thought to what size boats one is seeking to have at the facility and what are the attributes as well as potential issues associated with the sizes being contemplated.

The one thing my crystal ball says for sure is that things will continue to change over time. Building in flexibility is always desirable. And in more cases than not it requires thinking outside the box. For existing facilities, consider a master plan that can be implemented over time, with changes occurring in the off-season, to minimize potential disruptions, and to help spread out the cash flow expenditures while maximizing the cash flow income. Depending upon the site’s physical location and usable in-water areas, this could include such approaches as repositioning floating breakwaters in a way to allow more room for docking of larger boats; designing floating wave attenuators to also serve as berthing opportunities; using the area’s main navigation channel as the turning areas for the larger boats (e.g., externalizing the big boat fairways as much as possible); or having a long main pier without fingers to allow for continual mixing of different sized larger boats.

A project that comes to mind involves the design for a new facility where rock breakwaters were required. By widening the area between the breakwaters, the facility could increase the size of boats from a maximum of 120 feet to 328 feet. While widening the area between the breakwaters added cost, the increase in the size of boats provided a potentially significant economic as well a marketing advantage, and in this case was easier to build. In another facility, the original concept was a traditional marina layout with mains and fingers.

However, in analyzing the market, it was clear the marina would be a significant calling card for transient boats visiting a major metropolitan city. It became apparent that the size of boat that would be coming to the facility would continue to vary – so long mains without fingers were seized upon for the berthing of the continually changing mix of boats that range from 40 feet to megayachts and superyachts.

Factors to Consider
In thinking through how to capture a particular share of a market, water depths become one of the most important factors. Those facilities that have naturally deep water, 8 feet to 20 feet or deeper, have more options as to what size boats they may wish to accommodate than facilities with shallower water depths. If there is not naturally deep water, then the options are to dredge, which is extremely regulated, costly, and with other potential challenges, or shift focus to go after the market that can be accommodated by the shallow depths – perhaps the growing catamaran segment! And in determining the navigable water depths keep in mind the water depths at dead low tides (or expected low water elevations if in a non-tidal area), in addition to the average low water levels typically used for reporting water depths. You do not want those big expensive boats stuck in the mud or ripping open their hulls on a rock while in your marina.

Also, keep in mind that deeper water and bigger boats make for more challenging docking facility anchoring requirements – securing a floating dock for a 200-foot yacht in 20 feet of water (at low tide) is a whole lot different than a 35-foot boat in 6 feet of water!

Other issues that need to be considered are utilities – including electricity, water, pumpout, fuel, and WiFi. As the boats get larger the electrical needs and the costs go up exponentially. Water availability with meaningful pressure is also important. And what goes in also comes back out. Relying on a 55-gallon drum for pumpout isn’t going to cut it – and if your fixed pumpout station does not have deep enough water access, that also will not work.

Similar issues may apply to your fuel dock – or your harbor’s fuel dock if you don’t have one. Is there sufficient water depth? Can you supply and pump fuel quickly enough?

Next comes WiFi. About the single largest complaint from boaters around the world today, is the quality of the WiFi in the marina. The large open spaces, various heights of boats, as well as the numerous devices, create a challenge for meaningful WiFi, which in most cases can be solved, but it is expensive and the ever-changing technology is a real factor in configuration planning. The bigger boats, with their mass and all their internal systems, can be quite effective at blocking the signal. It is not too uncommon for a big boat with its bow or stern directly facing the WiFi antennae to have great signal at the antennae end of the boat and no signal at the other.

If you provide service or off-season upland storage, do you have a way of getting the bigger and heavier boats in and out of the water? This can also be a challenge if you’re hauling catamarans. Balancing service (if it is supplied) and the types of boats in the facility becomes a significant cost-benefit art.

The true challenge is to really analyze the site’s attributes and limitations as well as the various revenue streams and costs associated with any contemplated reconfiguration of the facility. And in areas that have shallow depths and/or navigation challenges, they might be better served with smaller boats and personal watercraft, including kayaks and paddle boards (the fastest growing segment of the recreational boating industry).

Communicate with Your Customers
It is worth remembering that in developed countries most facilities have simply expanded over time without any real planning and now are well over 30, 40, or even 50 years old, often with little substantive improvements. As a result, the physical plants in many cases are well beyond their useful lives, and in most cases are suffering from deferred maintenance – and in more cases than not, do not comply with current codes, particularly with respect to electricity, fueling, and ADA access. The good news is that upgrading a facility can raise pricing– typically even more so if you can include more big boats.

Communicated in a meaningful manner, the boating customers will perceive desirable value and, while not ecstatic about increased pricing – will pay the higher rates, and the improved facilities will also attract new boaters who also perceive the value of what is being offered.

I realize some of the points raised above, particularly regarding the challenges, may seem a bit obvious, but you might be surprised just how often they seem to get overlooked. Accommodating bigger boats at your facility may not be quite as simple or straightforward as first thought. But the trend towards bigger boats has continued, and there certainly can be many rewards for those facilities that can plan and do it in a meaningful and cost-effective manner! At the same time if you can’t reasonably do it – don’t. But do always strive to provide what your customers are looking for, and don’t be too shy about charging them for it!

Dan Natchez is president of DANIEL S. NATCHEZ and ASSOCIATES Inc., a leading international environmental waterfront design consulting company specializing in the design of marinas and marina resorts throughout the world. He invites your comments and inquiries by phone at 914/698-5678, by WhatsApp at 914-381-1234, by email at dan.n@dsnainc.com or on the Web at www.dsnainc.com.