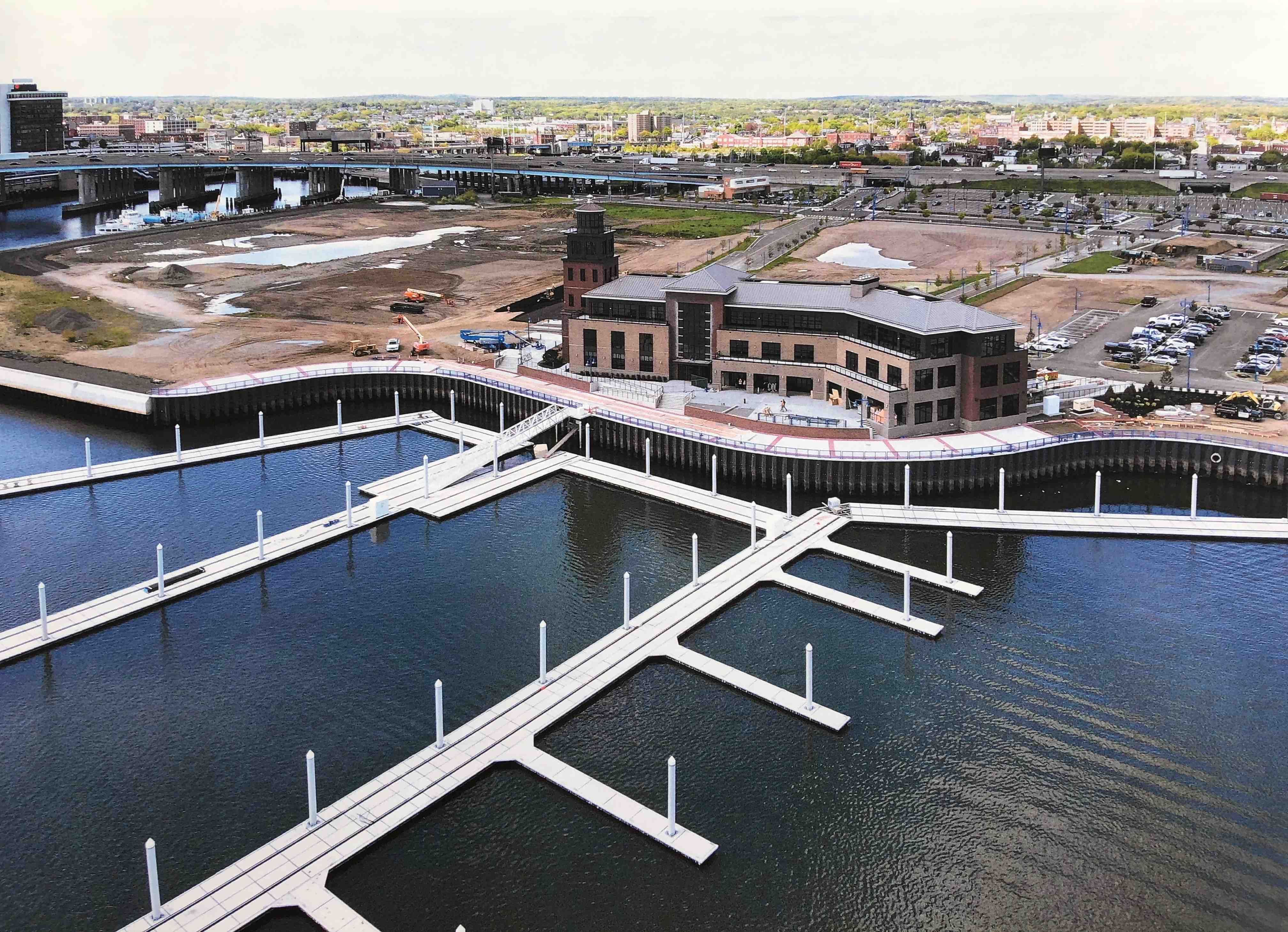 After almost 40 years of discussion and planning, Bridgeport Harbor Marina, just off Long Island Sound in Connecticut, is now open. It offers slips and side-tie docking for 250 boats from 30 feet to 200 feet long.

The marina is part of the Steelpointe Harbor development, which is located on an old industrial/commercial site in Bridgeport. (Businesses there included a ship repair company that serviced fishing schooners at the turn of the 20th century.) Work on the upland site began in 2008, and construction of the bulkheads in 2016.

The site required dredging both to reduce the pollutants along the bulkhead line and to provide the desired depth for boats. “We have eight feet everywhere at mean low water, and up to 25 feet in some areas,” said Mark Summers, project manager for the owner, RCI Marine.

Driving the piles for the marina presented some unique challenges, despite the fact that the building team drilled 20 test holes. “The bottom conditions here vary widely; I’ve gone from being unable to drive a piling over 40 feet to needing piles 95 feet long,” Summers said. “In some cases, we had piles go 50 feet into the bottom just due to their weight.”

Golden Marine Systems provided approximately 75,000 square feet of concrete floating docks for Bridgeport Harbor Marina. The dock structures were built on a nearby 40-acre site, then lifted into the water using the marina’s travel lift. Golden Marine Systems assembled the sections into the desired configurations, and the marina staff towed them into position.

The concrete decking was stamped to match the concrete patterns of the Steelpointe Harbor boardwalks, and the walers are made of aluminum.
“I’ve been wanting to use aluminum for walers rather than wood because it lasts longer, is more durable and requires less maintenance,” Summers said. An analysis showed that the aluminum walers Summers designed were stronger than their wooden counterparts.

The marina features eight piers, A though H. The L-shaped A dock serves as the courtesy/dining dock, and its outside section, which provides 25 feet of water, will be reserved for larger vessels. All of the main piers are 16 feet wide, large enough to accommodate the golf carts that slip holders can use to load and unload their boats. There are 5.5-foot-wide finger piers on the 60-foot slips and 4.5-foot-wide finger piers on the 40-foot slips.

Some docks have slips on one side and side-ties on the other. “Part of that is dictated by the fact there’s a shoal area, a mud flat that the fisheries people would not let us dredge. Even though there’s no essential fish habitat there right now, they think it might become productive in the future, so they didn’t want it disturbed,” Summers said. While there’s no room for finger piers, there is sufficient room for side-tie slips in these areas.

The marina offers pedestal-mounted water and electricity (30, 50- and 100-amp power), Wi-Fi, and pumpout stations. It also has a full fire system on the pier, with a 4-inch fire main throughout all the docks and standpipes located every 150 feet. There are two buildings with restrooms, showers, boaters’ lounges and laundry facilities.

Bridgeport Harbor Marina opened in June 2019, but the marina was still adding some finishing touches, like a fuel dock, through early 2020. The slips are already filling for the 2020 boating season.

Summers hears a lot of compliments about the docks at Bridgeport Harbor Marina. “People have said they’re the nicest docks they’ve seen; nobody else in the region has docks like them,” he said.