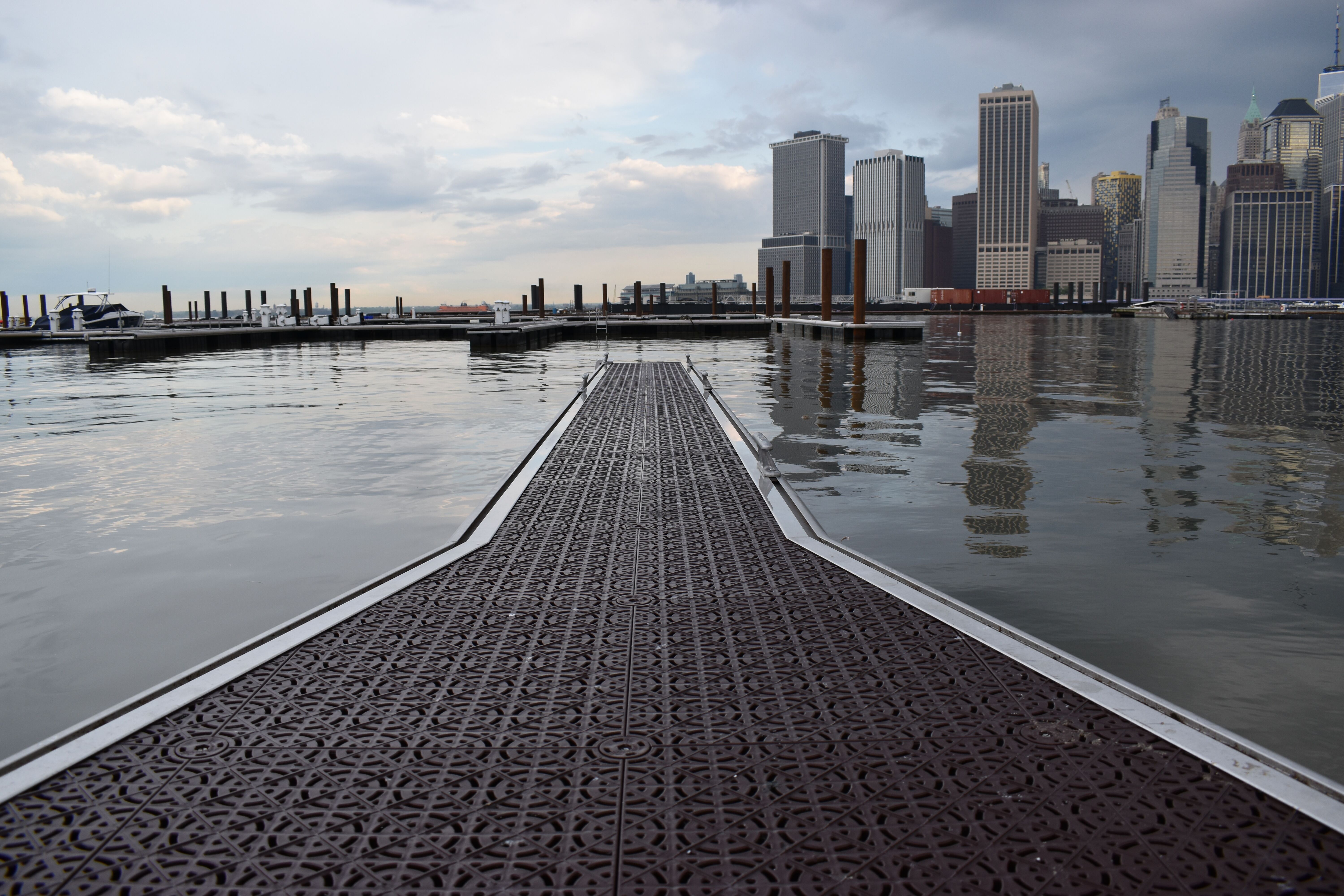 ONE°15 Brooklyn Marina has completed a second phase of construction that has produced what the marina calls “the calmest waters in New York Harbor.” The project included the installation of a steel wave attenuator and the reconfiguration of the initial marina layout to better serve its customers.

The marina, which opened in 2016, is located in the Brooklyn Bridge Park between Piers 4 and 5. While the location is ideal for boaters who want to enjoy spectacular views of Manhattan’s skyline, there were some difficulties that its owners, Singapore-based SUTL Group, had to overcome to make the marina a reality.

“There are two MTA (Metropolitan Transit Authority) tunnels right underneath the marina and another tunnel underneath the adjacent Pier 5,” said Shea Thorvaldsen, founder and CEO of TMS Waterfront, which assisted the marina with its phase two work. “The MTA is concerned about vibrations and settlements that could cause problems with the tunnels.” To avoid any interference with the tunnels, the marina initially used Seaflex and large concrete blocks to anchor its docks to the bottom of the Upper New York Bay.

While ONE°15 Brooklyn Marina had a successful initial season in 2016, New York City’s introduction of a citywide ferry service in 2017 increased boat traffic significantly. Under those conditions, “The ownership group wasn’t completely satisfied with the performance of the smaller concrete attenuators, so we regrouped and brought in Shea, who knows the site very well,” said Estelle Lau, the marina’s deputy CEO. The final recommended design was a series of wide, deep draft, floating attenuators.

The new design called for piles to be driven into the bay. “We were able to work through the issues with the MTA to make sure that we could put the piles in adjacent to the tunnels without having major problems,” Thorvaldsen said. “To do that, we designed a very customized wave attenuator structures, capable of spanning very large distances, for the front of the marina.”

The attenuator consists of a series of steel barges designed specifically to span the tunnel, knock down the waves and serve as a floating dock for boats. The two smaller barges, known as Little Bear One and Little Bear Two, are each 185 feet long. The largest (called Polaris) is 330 feet long by 30 feet wide and 11 feet deep.

“The majority of large, floating attenuators are made from segmented concrete, where you have shorter lengths that are daisy-chained together or put side by side to make them wider or longer. That was something that we couldn’t do here because of the tunnel restraints,” Thorvaldsen said. “The Polaris is a single piece, 330-foot-long structure that we built at Port Neches, Texas, then towed around the tip of Florida up into New York City.”

The cost of this steel attenuator was only two-thirds of what a comparable concrete attenuator would have been. “That was because we did all of the engineering in-house and provided the fabrication ourselves, instead of having to buy them from a foreign country where most of the large concrete attenuators are made,” Lau said.

The project also included optimization of the marina’s berthing. “We reconfigured the inside of the marina to be able to accommodate a wider variety of vessels and put in more amenities in the community dock area,” Thorvaldsen said.

The marina repurposed the original concrete attenuators, moving them to the inside docks. “Pier 5 and Pier 6 are all open underneath, so there are waves that get transmitted through them and across the marina,” Lau said. “Using the concrete attenuators in those areas helps calm the water coming through. Because we achieved that calmness, we were able to use lighter weight aluminum docks in the middle.”

The aluminum docks include structural plastic decking with openings that allow light to filter through to the water. “From an environmental excellence standpoint, it was important to us not to have solid decking and extensive shading throughout the marina,” Thorvaldsen said.

Dock renovations also included the addition of 120 feet and 10 more slips to C Dock and a robust T-head for B dock, which will provide berthing for large, luxury vessels. The marina has also brought in a converted ferry that will serve as a clubhouse – holding amenities, such as showers and classrooms for the large community dock, which provides public access for nonprofits and community groups.

ONE°15 Brooklyn Marina added a solar-powered lighting system for its docks and increased the resiliency of the electrical and water systems to protect against sea level rise in the future. Wi-Fi will also be available this year.

The marina now has approximately 105 slips and can accommodate boats ranging in size from 16 to 200-plus feet. It’s the only public, fully ADA accessible marina in New York Harbor.

The marina began reopening its slips in May. Lau said that some of its initial slipholders weren’t certain that they wanted to come back after 2016 because of the rough waters, but their attitudes have changed dramatically since they saw the revamped marina.

“They were thrilled with what they saw. Some of them had been talking about going up to Long Island, but now they are all coming back in,” she said.