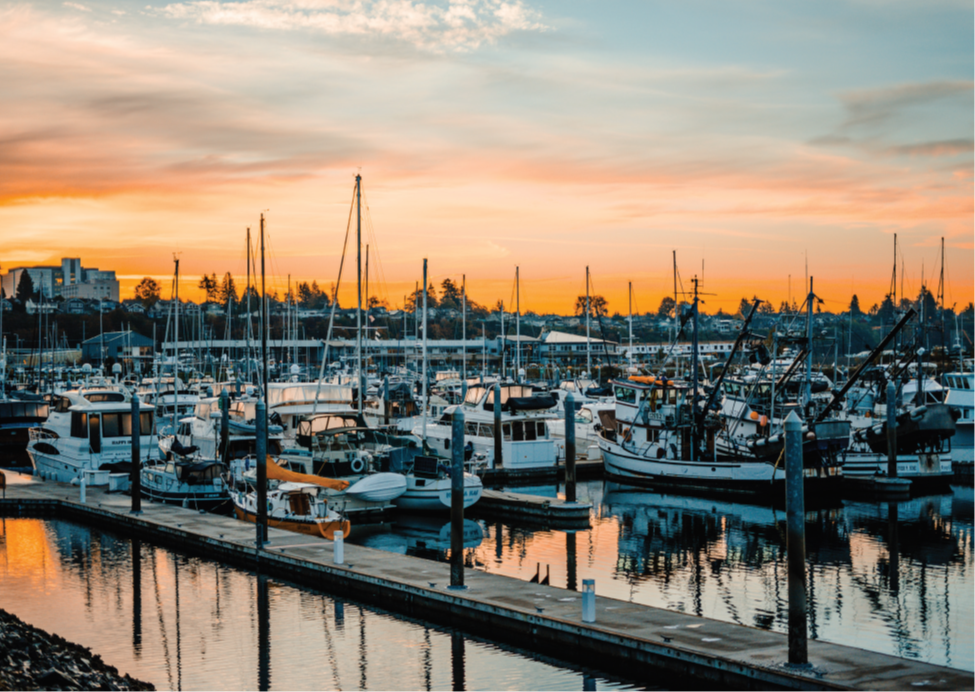 In 1918, the citizens of Everett, Washington, formed a port to create better jobs and to protect the local waters, their most valuable natural resource. While the Port of Everett has expanded greatly over its long history, it continues to uphold the working waterfront with international shipping terminals, marina facilities and real estate development.

The Port of Everett Marina is the largest public facility on the West Coast – home to 2,300 boaters, in three main dock areas, visitor docks and upland boat storage. While the marina is vast and serves an incredible number of boaters, it does so with meticulous care and attention. Congratulations to the Port of Everett, the Marina Dock Age 2019 large Marina of the Year winner.

Port Beginning
New upland development has helped add to the port as a destination, and the port has worked hard to carry on the tradition of the working waterfront and to clean up from its industrial beginnings. For much of the port’s century-long history, the area served as the epicenter for the city’s mill town industries and home to the Weyerhaeuser Company’s largest mills for pulp and paper production. The area was also home to the city’s commercial fishing fleet, started in 1898 by the arrival of a group of families from Yugoslavia, who brought their craft to Everett.

Over the next 50 years, the mills eventually disappeared. During World War II, a shipbuilding operation replaced pleasure boating in the deep-water seaport, but the marina was relocated to the north waterfront and recreational boating continued to grow.

The Port of Everett Marina was built in three phases: the Central Docks in the 1960s; the South Docks in the early 1980s; and the North Docks in 2007. Construction of the facility, including repairs and upgrades, spans nearly 50 years, so the infrastructure throughout the marina varies widely in age and condition. Facility maintenance and repair work is incorporated into the annual operating budget based on priority need, and the port budgets major infrastructure projects as part of its three-year capital improvement program.

New Port of Everett
In the past 10 years, the port has invested more than $35 million into the marina. The port’s Waterfront Place, a 65-acre mixed-use development around the marina, is bringing a $550 million public-private investment to the property.

After a multi-year, multi-million-dollar environmental cleanup of the former Everett Shipyard site, improvements on the docks began in 2014. See the chart on the previous page for details on the phased renovation project.
The four-phase approach allowed the marina to time its marine construction with key upland development, such as the reconstruction of more than 1,200 feet of bulkhead to support Fisherman’s Harbor, the first phase of development at Waterfront Place and home to the new 142-room Hotel Indigo, 266 waterfront apartment homes under construction, new public access amenities, including Pacific Rim Plaza, and future restaurants.

“The beauty of what we’ve been developing is you have so many choices. Boaters can stay on the back of their boat, go to a concert, go to a restaurant, or go to Jetty Island, which has one of the nicest beaches in the state,” said Jim Weber, marina operations director.

Weber started working summers at the port when he was 16 years old and has worked every facet of the main operations in his tenure. “When I started, Jim had been here for 40 years, so that put me at ease,” Lindhout said.

The marina operates with a staff of about 25, with very little turnover. “A lot of folks have been around a long time. They genuinely care about the marina and the customer service they provide,” Weber said. In addition, the port offers great benefits. “We have great wages and benefits for our staff, and so I think the whole package of working for the port is very attractive. Once you get in, you’re in and then tend to stay, “ said Catherine Soper, public affairs manager.

Weber and Lindhout have meetings regularly with the port commission, and the team embarks on a retreat once a year to evaluate the direction of the port. Through the construction process, regular meetings keep the project on task. The port budgets on a three-year capital improvement program. In addition to the renovations, the marina has huge maintenance needs for regular operations. “We used to budget for capital investment annually. We didn’t have that three-year look ahead, and that was difficult,” Soper said.

Brand Awareness
The marina serves many different types of vessels and boaters – recreational boats ranging in size from 20 to 140 feet, a commercial fleet of about 15 vessels, charter vessels, and some marine businesses that make use of moorage, including yacht brokers, local yacht and boating clubs, an early college academy with on-the-water classes, and the submarine maker OceanGate. Boaters are mostly local to Snohomish County. With access to some of the best crabbing in Puget Sound between the adjacent Hat and Jetty Islands, boaters keep the 13-lane boat launch busy, and the crabbing attracts many seasonal moorage customers from May to September.

The Port of Everett relies heavily on grassroots marketing, not big budget campaigns. It has a well-known presence in the area, so its best marketing efforts come from the personal connections with boaters and the community. Along with some annual print ads and digital campaigns, the port works many boat shows to build brand awareness. It also communicates directly with yacht and boating clubs and is active in the boating community providing updates about the marina and other education.

Events are central to the Port of Everett brand and span throughout the year.

The growing upland development has only added to the destination focus that events embody at the marina. It hosts more than 50 waterfront events, including a Sail-in Cinema, an outdoor movie series that acts as a drive-in theater for boats. This was an effort to promote the use of guest moorage, and in its fourth year, every movie has filled the guest docks.

Many events cater to tourists and local events and groups, but events like the Marina Customer Connect, a barbecue for all slipholders, help connect with customers in a more informal way. A select group of boaters engage with operations through the Marina Forum program. The group represents a variety of customers and keeps the management informed about what boaters are seeing and hearing out on the water.

Employees know boaters personally and are trained to respond quickly to issues. “I think our staff are really our ambassadors. The tenants know them very well, and they know the tenants very well,” Lindhout said.

Environmental Leaders
Between 2006 and 2015, the port completed a cleanup program across the property, including the marina. The $25 million cleanup systematically removed nearly 150,000 tons of contaminated soil, cleaning up groundwater, the bay, and the failing bulkhead and other creosote treated wood structures on the 65-acre upland site. The five-acre Everett Shipyard site cleanup was the largest undertaking, with a price tag of $13 million.

The Port of Everett works in many ways to preserve its waterfront culture – as a Clean Marina, at the spill response trailer on-site, through its stormwater program and treatment technology, and with various non-profit groups to provide boating education about green practices and preserving marine life. The port is beta testing a new Seabin system that removes microplastics and garbage from areas in the marina where the tidal flow tends to force items to accumulate. The program is working with the Everett Community College Ocean Research College Academy to help gather research and support the growth of the program.

In addition to being a huge tourist attraction, the 1,500-acre Jetty Island is a wildlife preserve and natural habitat for many species, including waterfowl, salmon and bald eagles. The man-made island was created with dredged sands from the Snohomish River. The port sponsors the U.S. Army Corps of Engineers maintenance dredging program in the river.

Best of the Best
The Port of Everett exemplifies the best of marina management practices for many individual reasons, but overall, it’s the vision, dedication and daily attention to detail at the port that makes it top-notch. And it does it all on such a large scale. When Weber travels to conferences, many are amazed by the size of the facility. To Weber, that’s just his normal. “It’s always nice to hear, but even smaller marinas have the same issues. We just have them at a larger scale,” Weber said.

The Port of Everett Marina creates jobs for the local economy and generates tax base for its community. It’s lucky to have financial support from the commercial port, which brings in most of the revenue. However, the working waterfront and community benefit greatly from the public access, community partnership and environmental stewardship that the marina brings to the area. The Port of Everett is a leader in the marina industry, and a community leader at its home waterfront and beyond.