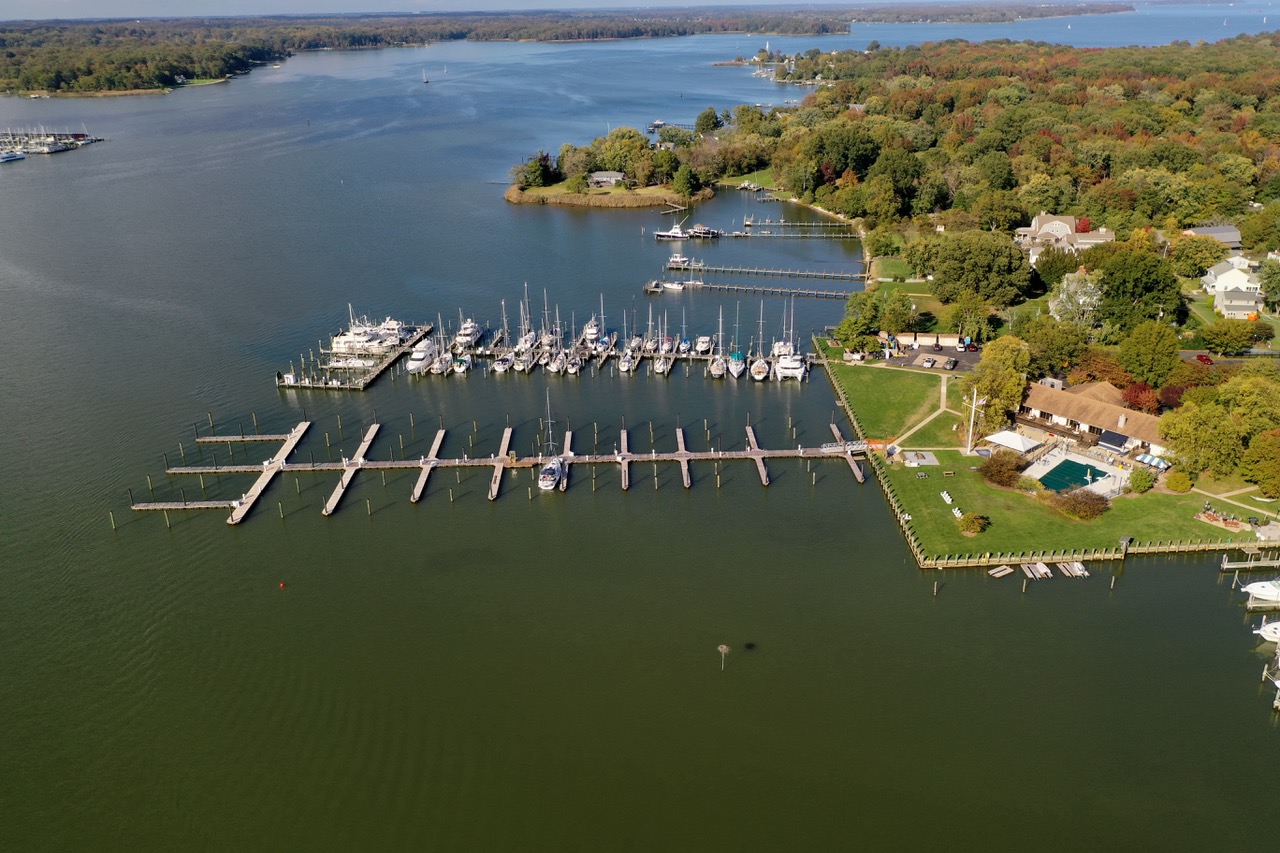 Chesapeake Yacht Club (CYC) has recently completed the first phase of dock renovations, replacing decades-old fixed docks with new floating docks from Meeco Sullivan. The Maryland marina is centrally located on the Chesapeake Bay, at the confluence of the West and Rhode Rivers.

The work was needed to replace the marina’s aging infrastructure and to continue to provide club members with a high-quality boating experience, according to John Murray, CYC project manager and George Donohue, CYC harbor engineer. Rising water levels were another consideration. “The entrances to the older docks were under water at times,” Murray said.

The club was undecided at first about the type of docks it wanted. “We had a lot of discussion and did a trade-off analysis between fixed and floating. We felt that floating docks are the wave of the future. The long-term total cost of ownership is less for floating docks,” Murray said. “Plus, the floating docks gave us something that no one else on the West River offers.”

The floating dock compensates for the fluctuating water levels, and its internal steel torsion bars and truss structure provide the strength it needs to withstand its orientation to the open waters of the West River.

The general contractor for the CYC project was Edwin A. & John O. Crandell Inc. of Galesville, Maryland. Crandell initially dredged the marina, removing six feet of the marina bottom close to shore, and seven feet for the further-out docks, which are intended for larger boats.

“The dredging was a little more difficult than we anticipated. Although we did take core samples ahead of time, there was more hardpan closer to the bulkhead than we thought,” Donohue said.

Crandell also did the pile driving and arranged for the delivery, staging and installation of the Meeco Sullivan floating timber docks that CYC had specified.

The new dock is 380 feet long, extending 150 feet farther into the river than the previous one. That added length enabled CYC to maintain the same 38 slips it had previously, but to enlarge them to accommodate bigger boats up to 70 feet long. The dock now includes six 45-foot long, extra-wide (29-foot) slips designed specifically for catamarans, as well as 45-foot, 55-foot and 70-foot monohull slips. It features Ipe decking and all new pedestals with upgraded electrical and 100-amp service for the 70-foot slips.

CYC approved the funding for the project in November 2019, and all work was completed by October 2020. The renovation has already yielded benefits; CYC grew by 50 members in 2020, and 16 of the new members are using the new slips. All but six of the 38 new slips were occupied as of mid-January.
“The floating dock was a clear selling point, and so were the catamaran slips,” said Murray. There are a few catamaran slips in area marinas, and the club’s catamaran owners like the fact that they can get slips close to shore and are not stuck out on a T at the end of a dock.

The marina has already started the planning process for the next phase of renovations, which will involve its two docks in the South Creek basin. “We will convert a total of 53 fixed pier slips to 54 floating dock slips. We are also extending the harbor line on this one, going out about 350 feet from the shore,” said Murray. Six slips of the South Basin docks will be configured for catamarans.

CYC hopes to start dredging and demolition in September 2021 and complete it by November 15th, when the winter waterfowl restrictions on in-water work take effect. On-site construction of the new docks will begin when those restrictions are lifted on March 1, 2022, with an anticipated completion date of May 15th.

Phase 2 of the renovations is also likely to include some not-yet-determined landside improvements to the marina, Murray said. Phase 3, which could happen in 2025, will include the replacement of the last fixed dock on the West River, which holds the fuel and pumpout systems.