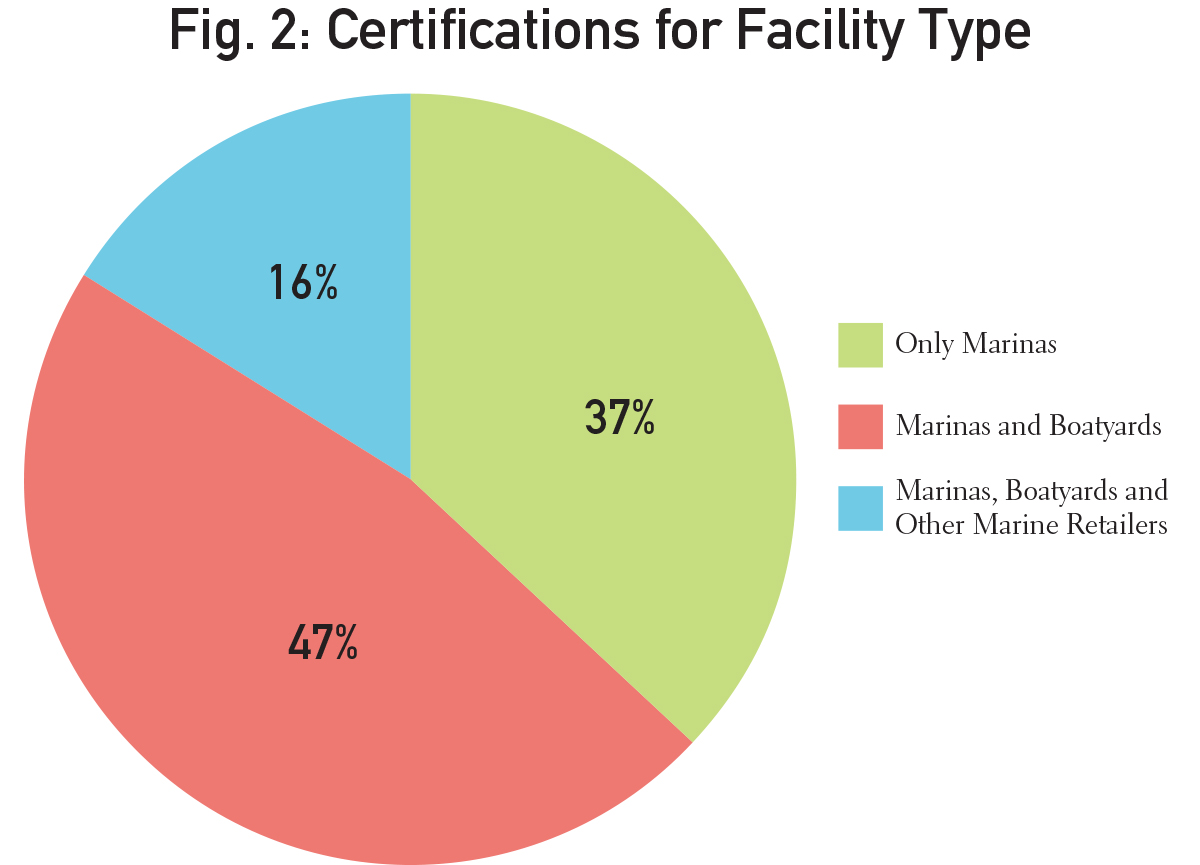 Editor’s Note: Each year Marina Dock Age conducts a survey of state Clean Marina program directors to determine the number of certified Clean Marinas, how programs are progressing or changing, and what plans are for the future.

The number of Clean Marinas in each state has grown by about 20 from the 2017 year-end results, as seen in the chart below. Slower growth in the last few years has spurred state Clean Marina programs to look at new initiatives to keep programs active and keep more marinas active in keeping the waterways clean. Many also hope new programs will entice more marinas to become certified. 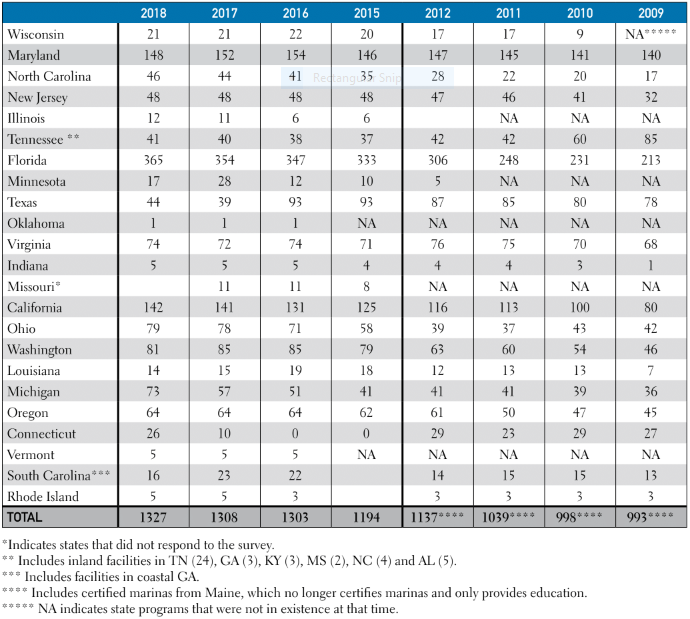 Restructuring
Rhode Island, New Jersey and Virginia are all looking at ways to revise their programs to increase participation.

New Jersey conducted an assessment of the state’s marinas to better understand why they are not seeking certification, but also to determine if they would be interested in a small grant program to help them incorporate best management practices. Marinas did show interest in the grant program and suggested money could be used for waste disposal, pollution prevention and clean-up, vessel wash wastewater treatment and educational programs.

“The survey showed that marinas don’t have the staff or time to sit and go through the paperwork and make the commitment (to Clean Marina certification). A lot of them are already doing everything in the guidebook, especially in New Jersey, because they have to be in compliance with all the regulations. That almost automatically approves them for certification,” said Mike Danko, assistant director of extension and marine recreation for New Jersey Sea Grant.

He said that the lack of interest in Clean Marina comes from the state not the marinas. With an ever-changing leadership in government, it’s challenging to keep the interest up for Clean Marinas and clean boating practices. Without interest, the state reduces funding and support.

“The biggest hurdle I see is putting value on a marina that uses the guidebook and makes changes based on what they learn, but they don’t want to certify because they see no value in it,” Danko said.
In the New Jersey state survey results, Danko found that 86 percent of respondents were aware of the program and 84 percent made some type of change after receiving Clean Marina information, but they did not pledge to certify.

The state programs that are struggling likely face the same problems as New Jersey, Danko said, with lack of funding and support, which trickles down to marinas as a program that has no value.

On the other side are governments that embrace Clean Marina. In Florida, the state’s boating programs were moved under the newly created “Office of Resilience and Coastal Protection.” With Florida’s Clean Marina program also covering resiliency, the move was beneficial.

“The state of Florida is really keen on increasing resiliency in all aspects of our projects and in working with communities. They shifted our program offices to encourage us to better work with one another. We’re setting out by division to learn what other offices do and proactively coordinating and communicating to grow more,” said Brenda Leonard, program administrator for clean boating programs at the Florida Department of Environmental Protection.

Leonard said the program is now in a good place as part of a coordinated team, instead of as a stand alone program as it was previously.

“We used to have a clean boating partnership, but there was a hiatus of growth due to many factors so there was nothing new or proactive happening with Clean Marina. This change was the state giving us its blessing to grow it more. I want to raise it to a new level with more recognition, ceremonies, flag raising and more,” Leonard said.

Maryland Clean Marina also went through a reorganization that stemmed, in part, from the state’s interest in resiliency.

“I suppose the move (to add resiliency to Clean Marina) was based on two things. First was learning more about the Gulf states’ work on this issue at the Dock’s Expo at the end of 2017. And the other was that my program was re-organized into the “Chesapeake and Coastal Service” unit of DNR. This unit housed the Coastal Zone Management program, which has been working hard on ‘coast smart communities’ and ‘coast smart grants,’ so resiliency and climate have been in my frame of view a lot more,” said Donna Morrow, program manager for the Center for Marine & Coastal Stewardship under Maryland Department of Natural Resources.

She also said everyone in her unit had to take basic climate change education courses from the Association of Climate Change Office and were then asked to consider how they could incorporate their learnings into their programs.

The Maryland program has held workshops and revamped its website to provide the latest severe weather preparation and resiliency tools. They also expanded into the realm of marine debris prevention and education, especially plastics. The Clean Marina program has added several articles and resources in its newsletters on preventing plastic waste and encourages marinas to organize stream clean-ups.

Going Above and Beyond
The availability of funding, resources and support making for successful Clean Marina programs may best be exemplified by the Ohio Clean Marina program, which has benefited from funding sources and initiatives put forth to protect the waters of the Great Lakes. Ohio is part of the Green Marina Network of the Great Lakes states, but it has also been successful as a stand-alone program.

Outside of its regular offerings of workshops, training and conferences, along with a wealth of online resources, this year the Ohio Clean Marina program stepped in to address shrink wrap when the recycler who marinas relied on since 2014 had to stop picking up the material from marinas. The program found CLI out of Cleveland, which agreed to bail and prep the shrink wrap, but did not have the manpower to pick up the material from marinas or drop off the prepped material to the recycler. The Clean Marina program approached Cleveland Metro Parks, which agreed to pick up and deliver the shrink wrap to CLI using its recycling truck and deliver the final product to Mondo Polymer. Cleveland Metro Parks would need drop-off locations, as it couldn’t visit every site. The Clean Marina program found four sites willing to act as drop-off locations, and a pilot program was started for marinas in Northeast Ohio. The Ohio program hopes the success of the pilot program will enable others in the state to copy and reach more marinas, and is now working with a videographer to create a “how to” video on preparing shrink wrap for recycling.

In Ohio, the Clean Marina program also became proactive in education this year in response to the state’s new rules banning the discharge of pressure wash wastewater into state waters. The Clean Marina program partnered with Bowling Green University, leveraging a grant from the Ohio Lake Erie Commission to research raw wastewater that comes from power washing. The goal is to have data ready to provide to sewer districts, which it hopes will help persuade the districts to allow pressure wash wastewater to be released to sewers. In the meantime, the Clean Marina program is working with marinas to ensure they understand the new regulations and are beginning to consider what they can do to comply. 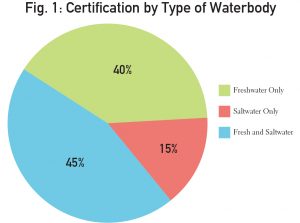 Management funds, now 40% of the programs work in strictly with freshwater and 15% focus on saltwater only. The remainder cover both (See Fig. 1).

States vary on whether they cover just marinas or other businesses (See Fig. 2). Thirty-seven percent certify just marinas, 47% certify both marinas and boatyards and another 16% also add retailers to the mix.

There is little change in funding. Twenty-four percent receive no funding, and another 29% receive less than $20,000. Just three programs take in more than $75,000, and five fall somewhere between $20,000 and $50,000. With minimal funds, it is not surprising the majority of programs have just one full- 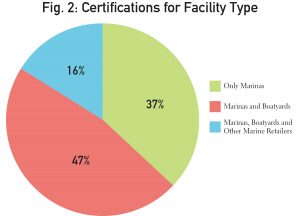 time person working on Clean Marina and often that is calculated using several people who just work on the program as a small part of their overall job.

Funding sources come from various places including state trade associations, the National Oceanic and Atmospheric Administration, EPA, Sea Grant and state agencies, such as Department of Natural Resources. Unique funding comes to the Tennessee program where the Tennessee Valley Authority sale of electricity is used to fund all programs including Clean Marina. Oregon is funded by state motorboat registrations. Washington receives funds through the National Estuary Program Near Term Action for the Puget Sound.