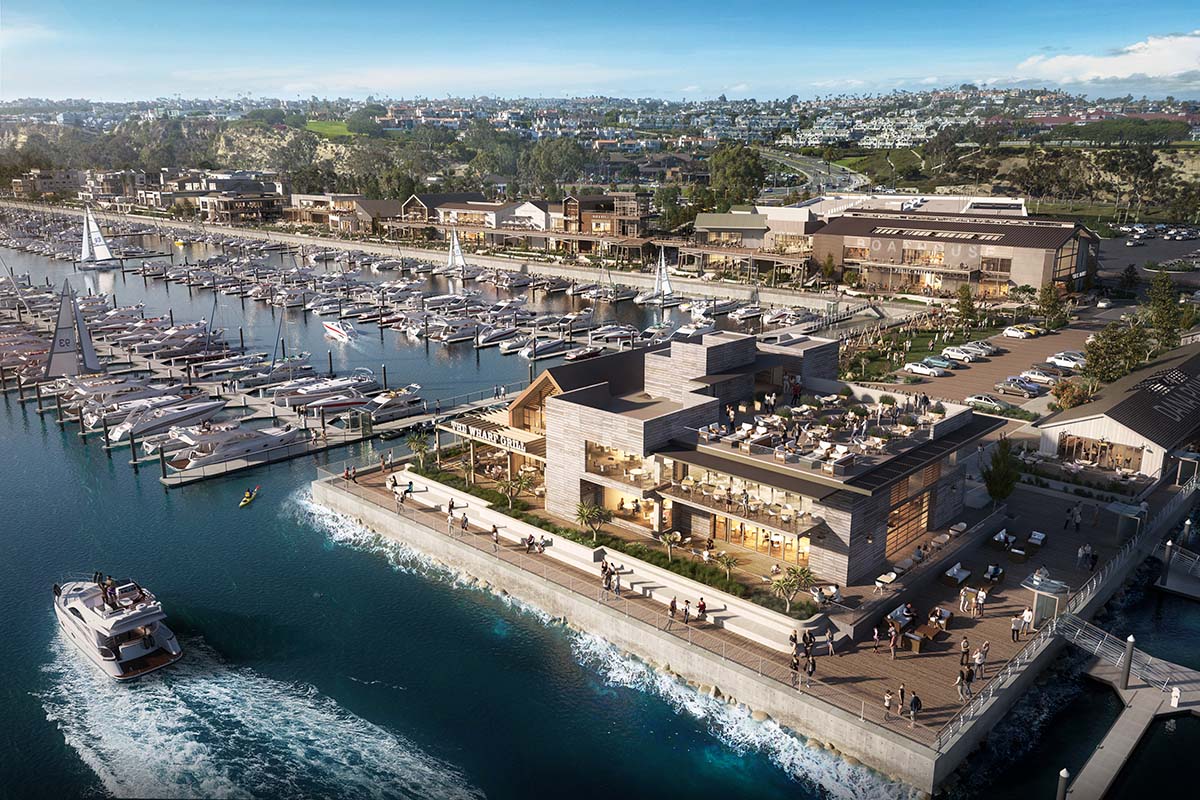 The first new float launched at Dana Point Harbor this past summer to signify that a new waterfront is on the horizon, and the long wait is over. Nearly two decades in the making, the Dana Point Harbor Redevelopment project, which will include a new-state-of-the art docking system, two hotels, and one vibrant commercial core, is now underway.

The project gained momentum thanks to the hard work of Lisa Bartlett, supervisor of Orange County, who has supported the project in multiple capacities for over 16 years. After the county’s years of deliberating strategies which included the option to perform the marina renovation in-house, Bartlett took a different tack and proposed a public-private partnership (P3) to complete the $400M+ project. “I thought, how is the county going to pay for this much-needed but expensive project?” Bartlett said. “I didn’t want to bond for the project and put debt onto the county.” Through the P3 arrangement Bartlett says, “it is costing zero tax payer dollars to complete a much-needed renovated harbor for us.”

Dana Point Harbor Partners (DPHP) won the project in 2017, after responding to a request for proposal. A lease was entered into in 2018 and with the necessary permits finally in hand, the partners broke ground on the marina component this past August.

The Dana Point Harbor Partners are comprised of Bellwether Financial Group, who will perform the marina construction through its company Bellingham Marine, Burnham Ward who will construct the commercial core, and R.D. Olson Development who will build the two hotels. The project is split into 15 phases with an additional two phases for improvements to the outer basin. Phased construction will allow the marina to remain open during the project, which is expected to span five to seven years. “We’ve done a pretty good job making sure that we’re taking care of everybody who’s in the harbor during this process,” said Joe Ueberroth, founder of Bellwether Financial Group.

The launching of the first new floating dock this past September marked the end of a long wait for the new marina. “It’s an exciting time for the whole community and we all look forward to the day of enjoying a harbor that is modified, has a new view corridor, and enhanced amenities on both the land and the water,” Bartlett said.

Bellingham Marine will replace 2,400 existing slips with their latest state-of-the-art Unifloat system. The new system will be entirely void of ferrous metals and pressure treated wood. It’s a bold new design with a focus on longevity, as Bellwether’s ambition is to fulfill the marina’s 66-year lease without replacing the docking system twice. The existing docks at Dana Point Harbor, constructed in the 1970s, are near the end of their useable life, some 50 years later. So to reach a service life 30% longer demands a radical new approach, and that’s just what Bellingham has been working hard to develop over the last decade. “We had already been building a long-lasting floating concrete dock system for many years,” said Eric Noegel, general manager of Bellingham’s Southwest Division, “but we took it from that [steel rebar] to a fiberglass rebar reinforcement and a geo-grid non-ferrous fabric mesh.”

Bellingham installed some fiberglass components on a system in Marina Del Rey four years ago, however, the Dana Point Harbor docks will be their first completely non-ferrous system. “It took us nine years to get an FRP (fiberglass reinforced polymer) rod that has an ability to match up with steel,” said Ueberroth. “We’ve done a ton of R&D on it.” The research and development was extensive, and the technology is a major leap forward for Bellingham and the docking industry at large. Noegel relays, “We got here by literally a decade of research and development, casting floats, breaking them, making sure that when we roll this out it’s going to be the new product for the next several decades.”

Even the hardware is proprietary fiberglass technology. “There’s no galvanized steel. There’s some aluminum and stainless, but it’s all non-ferrous,” Noegel added. “There’s nothing that’s going to corrode.”

Bryon Ward, president of Burnham Ward Properties said they immediately embraced Bellingham Marine’s concept of a non-ferrous dock system not only to enhance longevity, but to also reduce the number of pilings in the harbor. “This method aligns with the partnerships’ goal to create a more environmentally conscious harbor, as it also eliminates the need for treated lumber,” he added.

Beyond the ground-breaking structural technology, the docks will be wired with state-of-the-art light pedestals complete with display screens to navigate through remote metering, leakage detection, and even change the slip lighting to different colors. “When Dana Point is finished, people can really walk the facility and see a lot of new technology,” said Ueberroth. The light pedestals will be stylized to mimic the characteristic of the old lanterns that once lined the Pacific Coast Highway through town and have since become an integral part of Dana Point’s visual history.

“As we’re rebuilding major harbors,” said Ueberroth, “we’re looking at how we can learn from the past.” The project has been a true unification of its three major components of marina, commercial core, and hotels, and will prove to be an exemplary site in terms of integration between land and water features.

“We’re looking at hundreds of facilities and looking at what people did right and what people did wrong,” he added. A complete waterfront redevelopment provides the unique opportunity to create unity through planning in a way that piecemeal development often lacks. “We really needed to revitalize the entire harbor that’s over 50 years old,” said Bartlett. “Residents will soon see better walking and connectivity throughout the entire harbor.”

The project’s grand scale and new technology suggests that the harbor will be exemplary for years to come and promises to be a high watermark for both the Dana Point Harbor Partners and the community. “As a partnership, we have been committed to having Dana Point Harbor set a new standard for marinas on the West Coast,” Ward said. While completion is still years ahead, this summer marked a significant step forward in revitalizing this waterfront community.