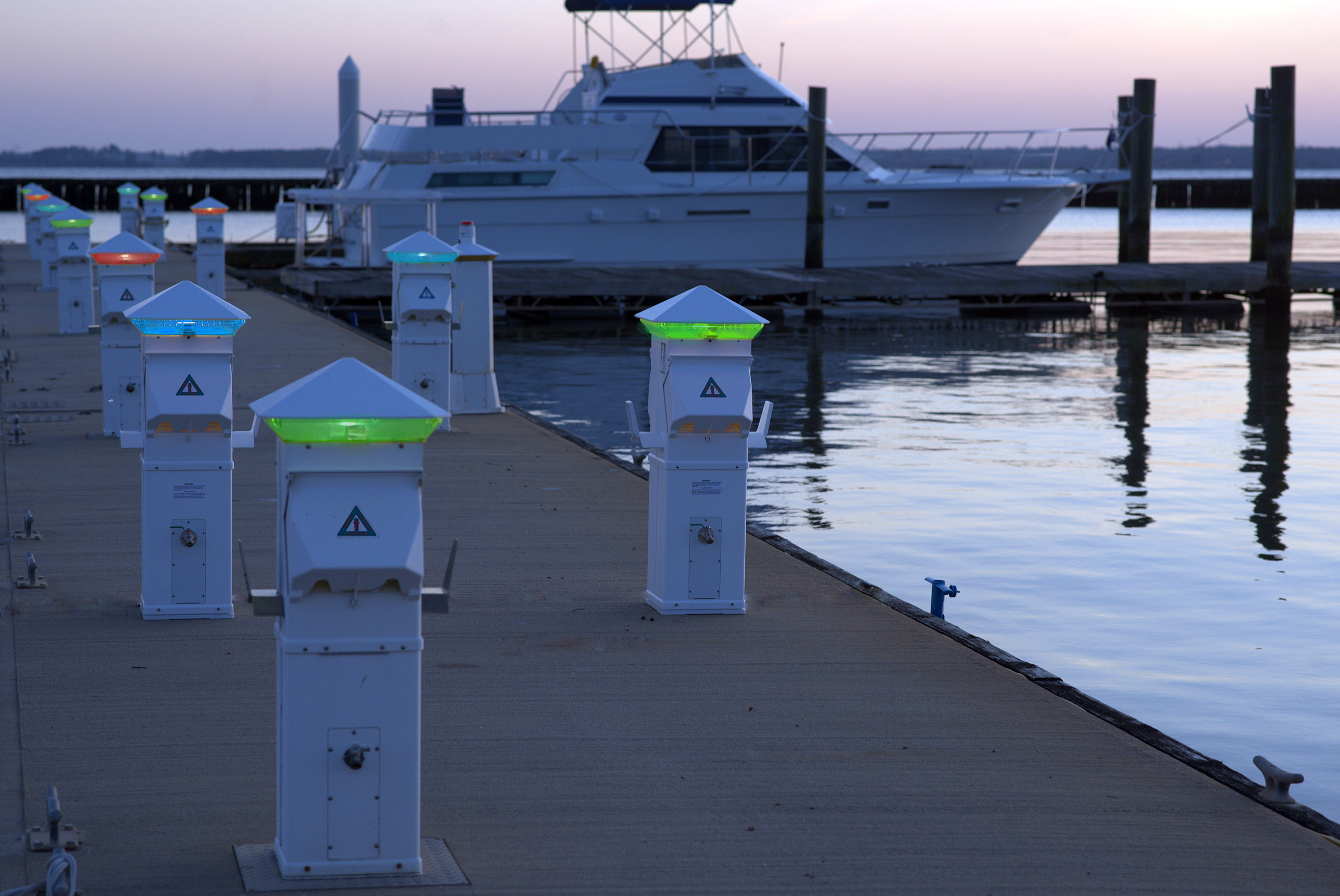 Dock Power: What’s Next for Design and Function

At quick glance, dock power pedestals across the U.S. haven’t changed in decades. The lighthouse shaped pedestal, topped with lights and various boxes and hose racks attached to the sides, have been the standard design at marinas across the country. However, many improvements and modifications have been happening to provide more efficient, safer and even sea rise resistant power. As the marina and boating industry changes, the requirements for pedestals have changed too.

“The size of vessels and power needs to accommodate them are increasing. Previously, we’d install mostly 30-amp and some 50-amp but more and more we get requests for 100 and in some cases 200-amp service from pedestals. We’ve seen as high as 600-amp at 480 v,” Jason Easton, sales manager for Eaton Marina Power and Lighting (Eaton), said.

Kelly Treiber, vice president of engineering and marketing for Marine Electrical Equipment (MEE), agrees. He sees power pedestals having to fill a variety of needs. One 300-foot slip would need 100-amp or greater for a 300-foot yacht, but at the same time, the space could be filled with several smaller vessels that have less power requirements. That means marinas need manufacturers to develop a pedestal that can accommodate various amps, or be willing to install several pedestals.

Safety First
As power needs increase, the ability to reduce shock risk has also taken on a more crucial role. Since 2011 when the National Fire Protection Agency (NFPA) was updated to require ground fault protection at marinas, power pedestal manufacturers have been working hard to help customers remain compliant.

Treiber said that while most of the NFPA article 555 (the section that addresses most marina functions) remains generally the same, the verbiage on ground fault has changed nearly every year for the past nine years.

“The changes aren’t based on anything that’s currently manufactured so we have to scramble to comply,” he said.
Pedestal manufacturers were originally left to buy ground fault protection systems from third parties.

“We ran into a 50 percent failure rate when we got the breakers right out of the box, and even after we’d test and ship to a marina, in many cases failures would continue. This reflected poorly on us and the big electrical manufacturers,” he said.

The trade wars further complicate this issue as manufacturers have challenges getting the components they need to build their products and are left with lower quality items.

Realizing customers were being left with an inefficient safety control, MEE developed its own ground fault relay system that trips breakers independently. A breaker can trip for reasons other than a ground fault issue and, with this device a visual and audible alarm is given only when the trip is for a ground fault interruption. The protection is also on each outlet on a pedestal not just each unit, so a problem with one outlet won’t turn off power to the entire system.

Eaton also addressed inefficiencies by developing an in-house ground fault tripping notification system whereby the breakers send a signal to the circuit board, which causes a red light to flash on the pedestal. This provides an easy way to spot a problem and determine where it is coming from.

“No two marinas are alike so protection that fits everyone the same is impossible. We have to work carefully with customers and make sure as the code changes that we’re always compliant,” Easton said.

Eric Farley, director of HyPower sales, points out that the amendments to NFPA 2017 again changed requirements with the standard to now have a 30-milliamp breaker. He said that the available pedestal monitoring software allows marinas to set the milliamp on the detection system to a lower level to provide even better protection. A time delay can also improve operations.

“A time delay can also be installed, so trips that are not a safety issue aren’t included. When any appliance is first turned on, the power isn’t quite in sync or in cycle and that can cause a trip on a sensitive breaker. The time delay allows for the system to realize it’s (a change in power) not really an issue so it doesn’t trip,” Farley said.

High Water Protection
Another challenge for the pedestal industry is to make a pedestal that makes sense in areas where flooding, high waves and powerful storms are becoming increasingly common. Once a pedestal goes underwater, there’s little hope of saving it, so requests for a solution have been coming in from marina customers more frequently. The pedestal manufacturers are taking different approaches.

For Eaton, the answer has been to mount pedestals on stainless steel bases that raise the pedestal high enough to be out of the water during flooding events.

“Sometimes customers even want the distribution elevated, especially on rivers. We build a stand to elevate those, but I’ve seen some just mounted on poles with electrical drops that come down,” Easton said.

HyPower took the approach of removal. While it is not practical in most cases to remove entire pedestals before a storm, for HyPower units, just the electrical components can be removed and taken to a safe location. The power snap all-weather base encases all electrical components as a power head that sits behind a sealed door.

“Some manufacturers have wires that have to be disconnected at the terminal bar, while we have plug in/plug out at the terminal bar. Our system just needs three screws undone, and you lift the electronics out and go,” Farley said.

He further explained that 80 percent of the cost of a pedestal is in the power head, so while bases can be easily replaced, the electronics cannot. In the future, Farley said, pedestals might be made waterproof with tighter cases, but he estimates that could quadruple the cost of a pedestal.

MEE has a shut-off on its pedestals, so when high water reaches a certain level the power automatically shuts down. Any big moves by manufacturers to address high water levels, Treiber said, will come from changes to the NFPA. Right now, he said the guidelines for wiring methods are vague, but if water levels increase there will likely be changes in standards like how much cable is needed to prevent high floating infrastructure from ripping power lines out.

Smart Pedestals
Providing convenience for customers and the marina is another newer focus for pedestals. For transient facilities, apps that boaters can use to turn power on and off are taking hold.

“I pull up to transient space, I scan an app and can then pay for power for as long as I am staying. For larger operations, no person is needed on-site, after hours,” Farley said.

While most of these apps are now stand-alone programs, Farley envisions pedestal operation apps eventually being absorbed into existing reservation systems.

Smart pedestals are becoming more popular for long-term customers. Through an app, a slip owner can see whether a pedestal is operating, how well its operating and if someone else is using the pedestal. The app also gives a glimpse into the operations of the boat by looking at power usage and trends. The advantages to this technology also extend to the marina operator who can monitor power operations on the docks from anywhere, identifying how much power is being used, where its being used and if there are any issues with the pedestals.

Design of the Future
The pedestal manufacturers interviewed remained tight-lipped on what their future pedestals might look like (perhaps different from the lighthouse shaped design); however, they will confirm they are turning to European manufacturers for inspiration.

According to Farley, the European versions are sleeker and have more features right on the pedestal instead of relying on software. “The pedestal tells you if its operational. It has little LED screens that display performance or water usage,” he said. “Ours all look nautical and maybe are becoming campy and not where the industry of today is.”

Trieber said the problem U.S. manufacturers face is the slew of regulations that puts function over design. “We have to conform with UL and safety approvals, which limit the shape and some of the things you can do,” he said.
Cost is also a factor. If pedestals are made from injection molds there’s a significant amount of money required to change designs. Sheet metal versions are easier to change, but there is still a cost.

Treiber does acknowledge though that customers are starting to ask for something different. “Our Canadian customers are always asking when are you going to make it sexy,” he said.

Farley said that the lights on pedestals are already changing with owners wanting different colors to reflect an overall marina theme or to be used as a notification system—green means a slip is available and red means it is not. Different colors could also be used on different docks, so instead of transients hunting for “A dock,” they can seek out the blue dock.

Easton agrees that in the U.S. market pedestals are very similar and have looked the same for decades. He takes feedback now from customers on what features they would like and their thoughts on what the next generation of pedestal should look like.