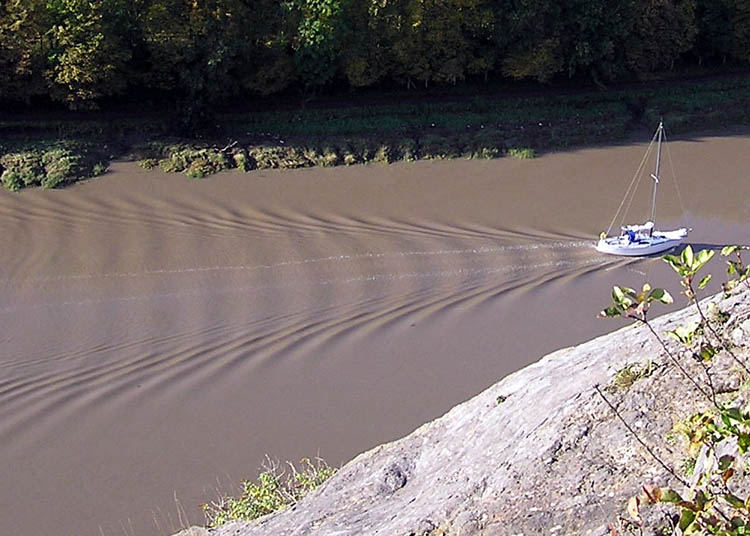 Don’t Wake Me: How to Design for Boat Traffic

During the summer months, when the skies are blue and boating conditions are ideal, powerboats take to the water in increasing numbers. On larger lakes, powerboats and jet skis frequently cover the surface, with daredevils jockeying for space. It’s a summer-activity must for many people, but it can wreak havoc on shorelines and marinas due to the wake waves created, especially by the larger boats. Despite posted wake zones, boat-wake waves can still travel great distances outside of those zones, carrying a large amount of energy with them.

Not All Waves are Created Equal
Typically, when engineers think about laying out and designing shoreline infrastructure to resist the effects of waves, they think of large storm waves generated by powerful weather fronts. As these storms pass they create trains of waves that can last for hours, battering against the shoreline.

Because wind and storm-generated waves require open water (called a fetch distance) to form, it is possible to know the direction from which the largest waves will be approaching. Boat wake, on the other hand, can come from any direction where a vessel is operating, and consists of only a few large waves followed by smaller ones. And while individual wave trains might only last a short duration, heavily trafficked waters can be covered in boat-wake waves traveling in all directions throughout the day.

A little-known fact is that boat wake carries quite a punch. Boat-wake waves 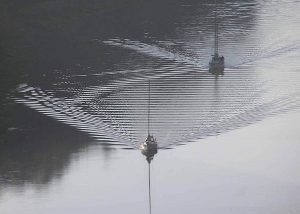 are what coastal engineers call monochromatic in nature. This means they travel in a well-defined, single direction without much spreading. On the other hand, wind-generated storm waves, called irregular waves, are a cacophony of different waves all blended together. While irregular waves have a peak direction, their energy is more dissipated throughout a range of directions.

Think of it this way: when an orchestra plays in unison, you hear a blended symphony of music. It’s difficult to pick out any one player, but then the trumpet player stands up and belts out a solo. While there might be other musicians playing around him, his song emerges as more clear and powerful. Because of its concentration of energy all moving in one direction, boat wake carries more energy with it then a wind wave of the same height: 100 percent more! This makes frequent boat wake impact potentially more damaging then storm waves.

Wearing Down
Boat wake consists of transversal and longitudinal waves: those running inline with the direction the vessel is traveling, and those running perpendicular to it. The point where these two wake waves cross creates a peak called the secondary wave. Typically, these secondary waves appear at 19-degree angles to the vessel axis, and their direction of movement makes an angle of 35 degrees. For a vessel running parallel to shore, its wake waves impact the shoreline at a 55-degree angle.

Lightweight, fast-moving vessels, such as container vessels, loose tugs and speed boats, generate the most severe wake. The height of that wake is directly related to the vessel’s speed, the shape of the vessel’s hull, and the water depth. Wake waves decay with increasing distance from their point of origin, the vessel’s axis. The wave period is directly related to the vessel’s speed. The longer wave periods generated by faster, lighter vessels, such as high-speed ferries, are particularly damaging to static infrastructure and unprotected shorelines. Floating protective structures, such as floating wave attenuators, do not provide great protection for long-period agitation and will simply ride over the wave. This makes speed vessels particularly damaging in areas using floating wave attenuation for shoreline and basin protection.

Inadequately protected, popular riverine shipping channels can also show the damaging effects of boat wake. Vegetation is frequently peeled back, exposing the soft sediments beneath; this results in significant erosion that would not occur due to currents or wind waves alone. The closer the vessels are to the bank, perhaps due to narrow channel widths, the greater the erosive action. This same kind of bank erosion can frequently be seen near recreational marinas where speedboats transverse close to the shoreline, even areas with no-wake zones.

Naturally vegetated, living shorelines that are exposed to boat wake frequently benefit from a supportive hand. In some cases, geotextile grids can be used to stabilize the shoreline and promote vegetation growth. These geotextiles are stapled into the shoreline and hold soils in place within fabric or PVC cells. In other cases, living shorelines will require some kind of additional wave mitigation/protection, such as vegetated gabions or concrete armor units, to prevent them from eroding.

Don’t Rock the Boat
Nobody likes wave agitation within a marina. When a vessel is moored to a dock, excessive wave agitation can result in damage as vessels bang against the dock or other vessels moored nearby. This is why it is a common goal to keep wave heights within a marina below 0.25 feet. More severe agitation is acceptable only in extreme events. To protect moored vessels from this agitation, most marinas will use protective structures, such as floating attenuators or breakwaters, to reflect wave energy and create a calm, protected basin. However, every marina needs an entrance, and this gap in protection allows some wave energy to pass through.

Coastal engineers typically analyze the potential for wave diffraction through

this gap, when laying out a marina. A wave’s height and energy decreases after it passes through the gap, but the amount of that dissipation is a function of the wave’s period, measured by the number of seconds between wave crests. Longer period waves penetrate more deeply into a marina than shorter period waves.

As it turns out, waves that are more monochromatic in nature, such as boat wake, also penetrate more deeply into a marina than the wind-generated, irregular waves. For example, for a wave with a wavelength of 50 feet and an entrance gap in the protective structure of 50 feet, a 1-foot irregular wave will dissipate to a height of 0.25 feet within 500 feet. For a vessel-generated boat wake wave of 1 foot with the same wavelength of 50 feet, the wave would not naturally dissipate to 0.25 feet until traveling 900 feet from the entrance.

While boat wake is infrequently thought of as a defining design condition, this type of increased wave penetration should be accounted for when laying out protective structures and designing a harbor entrance. Orienting dock layout so that boats are moored inline to incoming waves can also improve vessel stability.

Smaller harbors that do not require dedicated protective structures for storm waves are the most at risk from boat wake. In these areas, harbors may seasonally deploy dissipative floating breakwaters that break up the wave energy passing through them. These systems also provide a visual aid for boaters, alerting them that they are in a protected area.

Conclusion
For many enthusiasts, boating defines their summers. For those located in year-round boating climates, it is a way of life. While proper signing of no-wake zones and protection of erodible shorelines will help alleviate the effects of boat wake, the increased activity during the peak boating seasons can still result in considerable fatigue to infrastructure and shoreline areas. Proper marina entrance layout and orientation of moored vessels will lessen the risk of damage. Educating boaters on the impact of wake waves on the shoreline will help also them make informed decisions about where it is safest to travel at high speeds.

Margaret Boshek is a civil and coastal engineer with SmithGroupJJR’s Waterfront Practice. She can be contacted at Margaret.Boshek@smithgroupjjr.com.