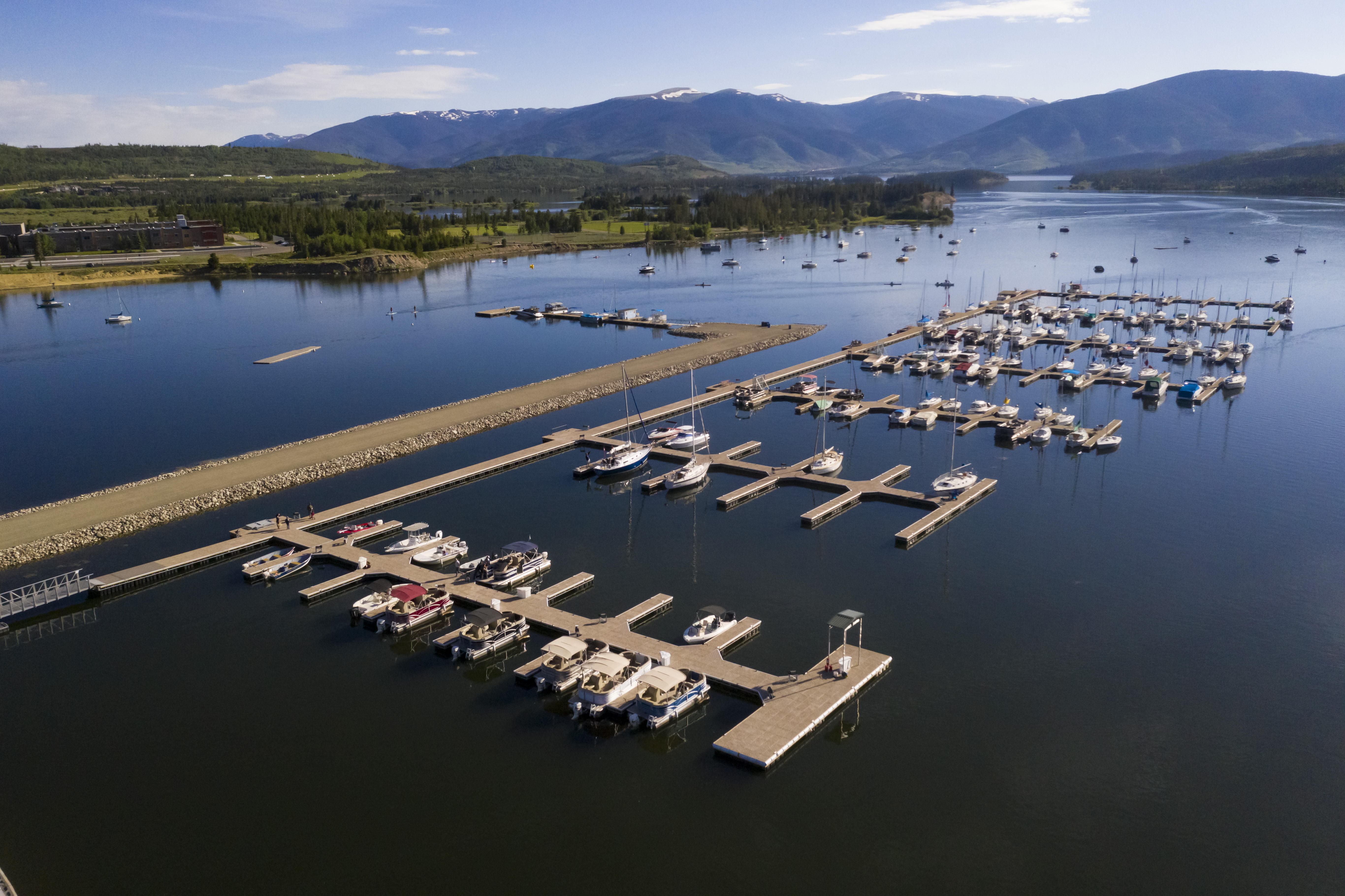 Frisco Bay Marina in Colorado was scheduled to host a regatta on June 22, the first weekend of summer, but had to postpone the event due to snow. Yes, snow in June. In May of each year the marina plans a “Rock the Docks” event featuring a live band to kick-off the boating season. Coordinating that event can be tricky as the marina staff and the community keep an eye on the melting snow caps and rising lake level. And, of course, there could be snow.

“That’s what you deal with living in the mountains of Colorado,” said marina manager Tom Hogeman, who has worked at the marina since the 1990s.

Frisco Bay Marina is a 150-slip marina located on Dillon Reservoir, about an hour west of Denver. Hogeman said the marina, which is owned and operated by the Town of Frisco, hosts eight to 10 events each year, but not all are boating specific.

On August 12, the marina hosted the 9th annual Sandcastle Competition. “The kids love it,” Hogeman said. During the competition the beach area at the marina is plotted out in squares and the children are assigned spots to build their sandcastles. Hogeman said when they first started the event there were maybe a dozen squares; this year it had 40. Once again, the weather played a factor in the event. Hogeman said the attendance was down some because it was raining that morning, but about 200 people still attended.

Each child receives a bucket and shovel and has about 90 minutes to build a sandcastle. The kids come up with a variety of themes and decorations to add to their sand structures. The judging process adds a unique touch to the competition. The Summit County avalanche rescue dogs serve as celebrity judges and indicate their selection by barking and pawing. Some builders sneak dog treats into their structures as a welcome bribe for the judges.

The sandcastle competition was held on Saturday morning, and later that same day the marina hosted a classic boat show and parade with the Rocky Mountain Chapter of the Antique and Classic Boat Society.

Due to the winter weather in June, the 12th annual Timberline Cruiser Regatta, sponsored by New Belgium Brewing Company, was rescheduled for August 31.

Hogeman said the regatta is not your usual sailboat race. The teams can collect extra points by throwing balls into floating targets (inflatable pools) along the race route and singing to a mermaid on one of the islands. Festively decorated boats and costumes also earn extra points for the crews.

About 30 to 40 boats participate each year. Hogeman said most of the participants are slipholders, but they also get people coming from about an hour away. After the race there’s an awards presentation, buffet and band. “So even if you aren’t on a boat you can enjoy the party afterward,” he said.

The fall boating season will wind down with the 4th annual Fall Locals’ Party and Brunch on Sept. 15. “We want to show our appreciation to our locals and the people who stick with us through the cold, slow months,” Hogeman said.

The event will feature $5 food and drink specials at the restaurant, Bloody Marys, brunch foods and live music. The highlight of the event is the chance to win a Dillon Reservoir adventure. Residents with an ID showing their Frisco residency can enter a drawing to win giveaways such as paddleboard and pontoon rentals.

“We are trying to get people out on the water,” Hogeman said. “It always surprises me to talk to people who have lived here a long time and they haven’t been out on the water.”

‘The place to be’

The marina employs about 30 people during peak boating season and additional personnel from the town help during event weekends. Hogeman said the events are an incentive for their slipholders to come to the marina and go boating, and it’s an opportunity to interact with other boaters.

“We have a good time out here,” Hogeman said. “This is definitely the place to be in the summer months.”

The on-site restaurant, The Island Grill, helps during many of the events by providing buffets and drink specials. Hogeman said the events bring a lot of people, including non-boaters, to the restaurant, sometimes doubling its revenue compared to a normal weekend.

Because the marina is owned and run by the town and is part of the town’s public parks, the events and activities at the marina are not entirely revenue-driven. “It’s about getting people to the Town of Frisco in general. It’s a win for the whole town when people spend time at the marina,” Hogeman said.

The marina is located at the end of the town’s main street, “It’s a pretty unique amenity for a Colorado town to have a marina and reservoir,” Hogeman said. “It’s very walkable. People can go downtown to the shops and restaurants.”

On August 16, the Town of Frisco celebrated the completion of a project called the “Big Dig” and the first phase of several improvements to the marina.

The “Big Dig” involved significant excavation of the lakebed in the Frisco Bay to improve navigation, lengthen the boating season, and expand recreational facilities at the marina. The grade in the bay was lowered by up to 13 feet in some areas. The project included moving 85,000 cubic yards of dirt and creating four acres of new land and a new gangway.

Hogeman said the project gave them more room to separate the different types of users at the marina. Previously the fuel dock, slips, paddle sports and the beach were all in one area. Now the boat docks and ramp are in one section of the marina and the paddle sports and beach are in another. “It provides better safety,” he said. “And, people are able to spread out and do what they like to do.”

Phase One of the project included relocation and construction of a boat ramp in a new location. The new ramp has three lanes, rather than the previous ramp’s two narrow lanes. The beach was also expanded from 50 feet to 400 feet. New walkways/promenades and railings were also built along the shore.

“The Frisco Bay Marina is one of Frisco’s crown jewels and the epicenter of summer recreation here in Frisco. We are already seeing the impacts of these marina improvements with the phenomenal level of activity on the newly expanded beach, and we know that these changes will continue to have significant impacts on the quality of life for Frisco residents for many years to come,” Frisco Mayor Gary Wilkinson stated in a press release.