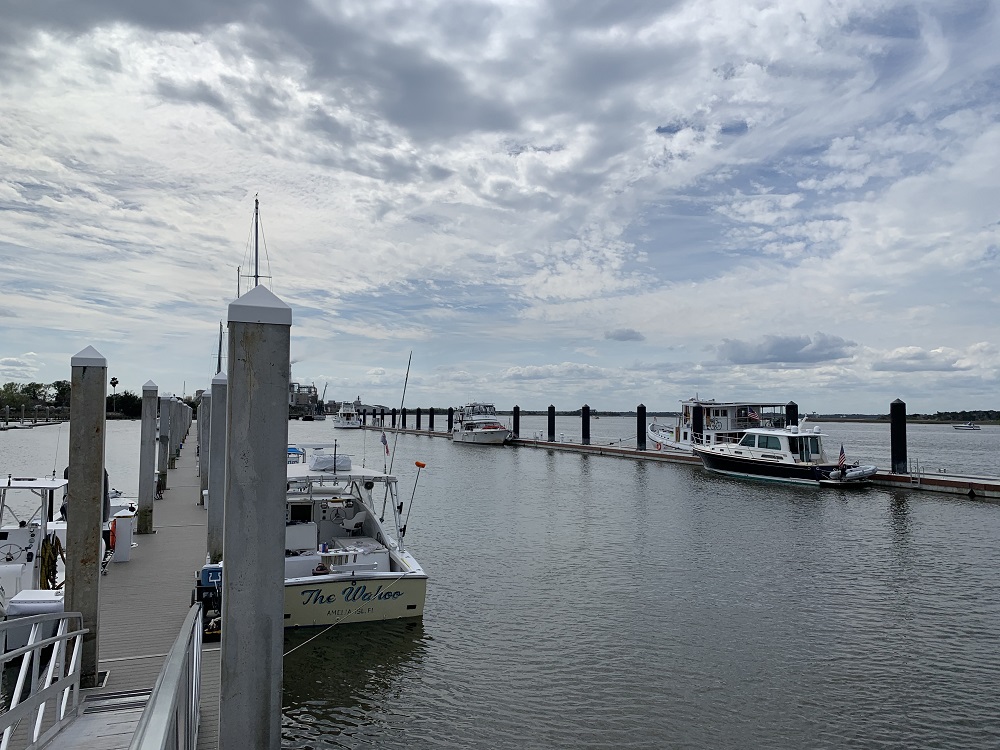 After phase one of a renovation project, Fernandina Harbor Marina in Fernandina Beach, Florida, reopened in January. It was redesigned to solve sedimentation issues by working more closely with the natural features in the area. Applied Technology & Management (ATM) first began studying the conditions for the city in 1995, and this year the first part of the newest redevelopment project was completed.

Downtown Fernandina Beach is located on the west side of Amelia Island in northeast Florida. The city is on the Amelia River, which also serves as the Atlantic Intracoastal Waterway (AIW) in this reach. Fernandina Beach is the northern most town on the AIW in Florida and lies just southwest of the St. Mary’s entrance channel to the Atlantic Ocean.

In the late 1960s, the city built a municipal marina in a prominent location, and the state of Florida also built the state’s first Marine Welcome Center. The location was and continues to be a popular transient boater and tourist stop. The downtown area has many popular shops and restaurants and has a great ambiance. The facility is operated by Westrec Marinas.

Problems from the Start
For better or worse, the marina was improperly sited from the start. As the 1969 aerial photograph illustrates (Figure 1, see this page), the marina was constructed landward of the naturally deep river waters and dredged from an intertidal mudflat. The dashed curve shows where the area shrimpers built their docks to take advantage of the naturally deep water in this portion of the river and where the city built the municipal marina. In the southeast U.S., the

coastal areas from about midway along South Carolina to Nassau County in Florida experience reasonably large tides (locally averaging 6 feet), and the rivers contain naturally high amounts of fine-grained sediments in the water column that are kept suspended by the high tidal currents. During slack tides, these sediments fall out of the water column and are then resuspended when the higher tidal currents resume. Where currents are insufficient to resuspend the sediments, mudflats and salt marshes form and equilibrium is reached.

Because of this, siting marinas with insufficient tidal currents in this part of the country creates an ongoing maintenance dredging problem. Sedimentation can range from 1 foot to more than 12 feet annually.

In the early years of the municipal marina, the sedimentation problem was addressed using prop dredging with a tugboat during times of peak tidal currents. But, then, in the mid-1980s, the city entered into a public-private partnership and the marina was redeveloped, expanded to the south further into the mudflat, tripling the facility in size. A timber “siltation barrier” was added to the far south boundary. All of this greatly exacerbated the sedimentation problem. The siltation barrier only made matters worse because the sediments were not entering the marina as “bed load” (the process where sediments are moved along the bottom of a river or along the beach by currents) but as “column load.” The barrier further restricted the tidal currents – making the marina a very efficient siltation basin.

Figure 2 (circa 2017) shows the originally expanded marina and the same naturally deep-water curve from the earlier image. Nearly all of the wetslips in the originally expanded marina (except the floating wave attenuator at the western boundary) were built in the part of the river that naturally wants to be an intertidal mudflat. To make matters even worse, the main piers of the traditional dock “tree” arrangement added six more structures that helped slow tidal currents and reduced flow.

Studying the Issues
The city retained ATM in 1995 to study the issues at the marina, looking to increase leasable slip footage and suggest solutions for the ongoing sedimentation problem. Following field studies, analysis and public engagement with project stakeholders, ATM developed a concept for improvements as illustrated in Figure 3 , which included:

• relocating the city boat ramp from the central location in the marina to the far south end;
• installing a low-crested bulkhead that would allow the tidal waters to flow across and into a newly developed salt marsh restoration area. The mudflat would be elevated to support the marsh vegetation using dredged material from waterward of the new bulkhead;
• placement of a current-parallel floating dock along the new bulkhead for alongside dockage;
• realignment of the floating wave attenuator to allow for maximum capture of tidal currents in the south basin;

• alignment of all berths and dockage parallel to the tidal currents to minimize reduction of the currents due to presence of the marina;
• addition of alongside dockage north of the marina in the naturally deep waters.

The city did not have sufficient funding to complete the proposed plan and implemented a few key elements of it. Figure 4 (see below) shows the marina as it was redeveloped in the early 2000s and as it remained until it was

severely damaged by Hurricane Matthew in 2016. The current parallel

alongside docks were added in the northern portion of the marina extending to the city’s property line during this time. The south “sediment barrier” was removed and the floating wave attenuator was realigned to allow additional current into the south basin. However, the south basin dock trees remained in place, and the city committed to an expensive and infrequent dredging program. A lack of dredged material management options added to the expense of the maintenance dredging, which meant moving material via pipeline or barges to disposal sites many miles south of the marina along the AIW or mechanical removal and off-loading to dump trucks to be hauled to remote upland disposal locations.

More Hurricane Damage
The marina closed in late 2016 due to severe damage to from Hurricane Matthew (primarily the 1986 components), and the facility was further damaged a year later by Hurricane Irma. The city was able to obtain funding from the Federal Emergency Management Agency (FEMA) to repair and replace several of the damaged components, and ATM developed a plan to redevelop the marina and make use of the natural conditions at the site to improve resilience for future severe storm conditions and long-term sea level rise. It is noted that many of these features were identified in the 1995 improvements plan, but were not carried out due to financial or other constraints.

Redevelopment Highlights
The south basin floating docks were first removed to facilitate dredging to not less than 8 feet at low water. Following the floating wave attenuator replacement, the shore parallel docks nearest the shoreline were repaired or replaced and will serve as dinghy docks for an expanded city mooring field as this area is not expected to maintain adequate depths for larger vessels. In place of the prior dock trees, a new current parallel central dock was added so now all of the docks and vessels in the marina will be oriented parallel to the currents. While total slip footage in the new plan is technically reduced under this arrangement, leasable footage has been greatly increased due to providing the berthing areas in deeper water so the slips will not be in a mudflat.

The attenuator is constructed from structural inert concrete with rub guards made of composite material. Attenuator anchor piles are coated steel pipe piles. The use of steel pipe piles also permits adaptation should sea level rise more quickly than anticipated, as the pile length can be extended by welding additional length to the top. The attenuator is now also served by an 80-foot Americans with Disabilities Act (ADA) compliant gangway that is operational at the highest astronomical tide recorded in the most recent tidal epoch.

Phase one improvements were completed early this year, and the marina reopened in late January. The north floating attenuator will be replaced soon, while the interior north basin docks will be extended in the future as funds permit. The annual lease slips are already full with a wait list in place and transient bookings are robust. Charter captains that keep their vessels on the dock nearest the shore in the northern portion of the marina have reported that currents have increased and the water has deepened in this undredged area, providing some anecdotal evidence that the new design is allowing better flow through the entirety of the marina and working with nature.