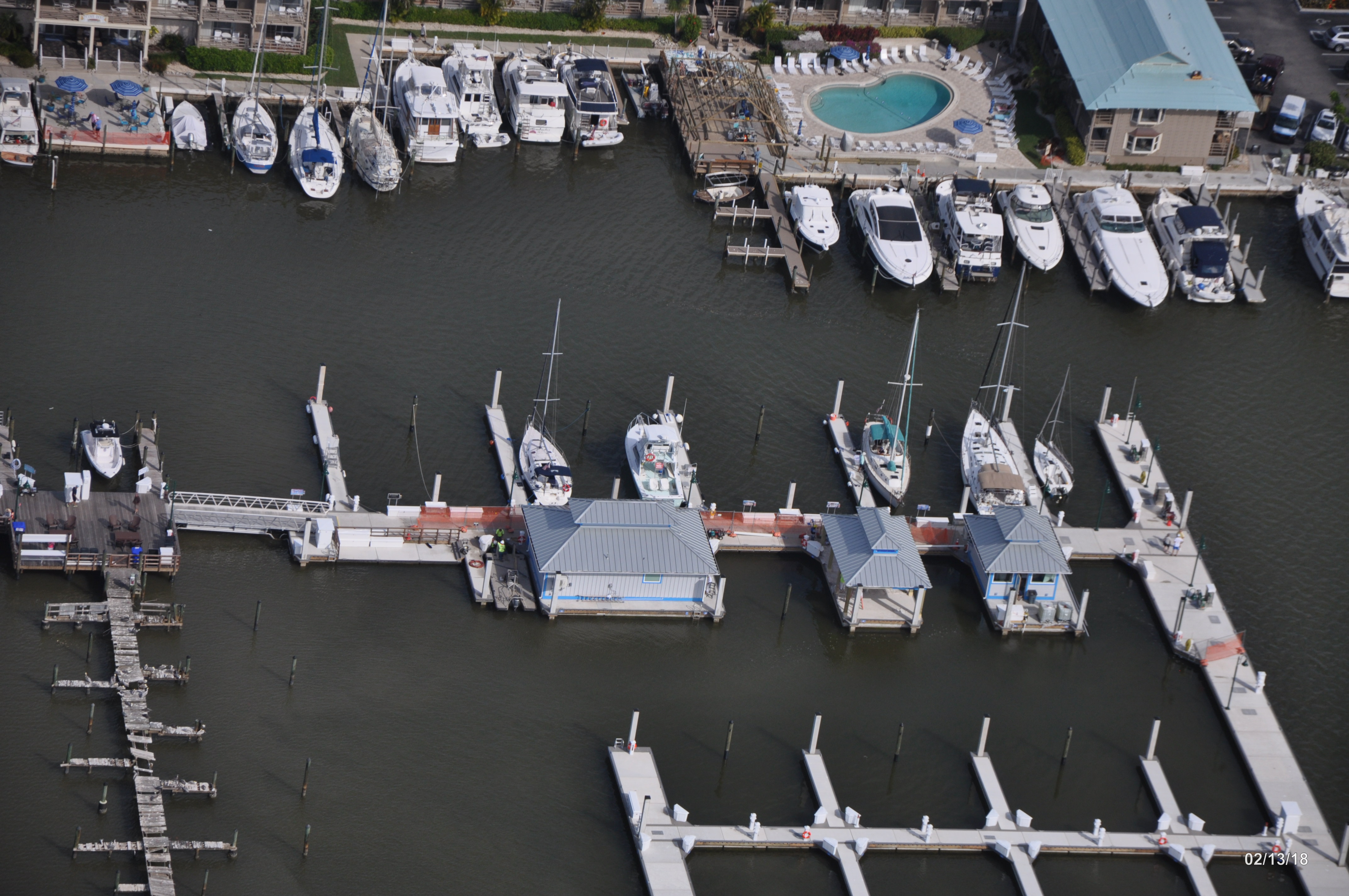 The performance and endurance of concrete floating platforms is outstanding. They can be built with almost any freeboard and can be square, round, curved, sloped, stepped, notched and decked in any way the owner specifies. They support buildings of every style and building material. Floating platforms are limited only by the imagination.

Many public and some private marinas invite the public to experience the waterfront. In a social-equality world, marina projects win public support by incorporating community activities and park areas and opening promenades and beaches to all. Alamitos Bay in Los Angeles, California, has done away with fences and security gates altogether.

Land Out of Water
Marina developers often contend with a shortage of land. This can be remedied by placing buildings on the water, creating “land” where there was none. There are three benefits to building on water. First, some functions, such as a harbormaster’s office or a boat rental concession, are better done in the marina. Secondly, pulling up to the dock to buy fuel, supplies and bait is a lot more convenient than having to go ashore. Finally, a restaurant, bar or yacht club has more ambience on water.

Naples City Marina has three floating platforms that support a dockmaster’s office, gazebo and restroom complex. The latter includes showers and laundry and stands on a 45-foot by 29-foot platform with a built-in drainage system. A gravity fed sump collects waste water and pumps it on shore.

Cap Sante Marina in Anacortes, Washington, has party platforms the operator can tow to any point in the marina and position in a slip or side-tie. When equipped with pavilion tents and staffed with chefs and bartenders they provide venues for events from barbeques to wedding receptions.
Floating platforms are widely used for sailing schools and dinghy docks, some with driveway-like launching ramps cast into the platform. Others are part of a larger dock with cast-in stepdown to a lower freeboard. Notches can be configured in the platform to facilitate getting in and out of human-powered watercraft. Some have arm rails that make it easier for disabled watersport enthusiasts.

College and club crew facilities have been constructed with floating platforms that gradually slope downward from the boathouse to the water. The low freeboard helps launch delicate eight-oar shells with as little drama as possible.

Design and Construction
The match-cast, post-tensioned manufacturing process is state of the art. Bellingham Marine has been perfecting this technique for more than 20 years. While cast-concrete platforms have been built on-site, the company prefers to build them in transportable-size modules. “That allows us to build in one of our ISO certified, temperature and humidity-controlled plants,” said Rob Rasmussen, general manager, Northwest Division. “We can ensure the strength and quality of the concrete and control all critical manufacturing processes, including proper steel placement and casting techniques. Modular construction provides a better product and enables transport by commonly used truck and barge equipment.”

“Match-cast” refers to the process of casting one float and then casting its neighbor using the side of the adjacent float as a form. Low-profile shear keys are cast in the concrete that interlock when the platform is assembled. They provide perfect alignment along with tremendous torsional strength. The result is impressive: all gaps are closed and tight; everything fits with precision.

Steel rods or stranded cables run through pre-formed ducts from one side to the other and tensioned by a hydraulic ram. Tension is held in place by capping hardware. There are usually multiple rows with at least one row near the top and another near the bottom. The multi-tiered tensioning system resists bending loads more efficiently than a single-tiered system.

Concrete is strong in compression and less strong in tension. Post-tensioning holds the concrete in constant compression. The compression load must be exceeded before the concrete is under tension. “That won’t happen,” said Craig Funston, vice president of engineering for Bellingham Marine. “Tension placed on the steel with the hydraulic ram remains reasonably constant throughout the life of the structure. Even at maximum design loads the bending movement is limited so there is always sufficient tension to protect the concrete. We combine the best of both materials.”

Any amenity that can be added to a dock can be incorporated in a floating platform. Built-in utility runs protect electrical and plumbing from wear. Sewage systems can be cast in for rest rooms. Wood and other surfaces can be added. Anchors, footings and bolts needed to fix buildings to the platform can be cast in. As an example of floating platform versatility, live bait tanks are built into a platform in California.

Once assembled, the platform is essentially a single structural unit. The rock-solid stability on water is uncanny, truly “terra firma.” Large barges with flat “footprints” are similarly stable. Under almost any circumstance short of a tsunami (very long period wave), it is impossible to feel any difference from standing on land. Width is key; stability increases with the square of the width. Platforms greater than 15 to 20 feet wide are essentially rock solid.

Under ordinary conditions a tipping force will be opposed by a self-righting force. The exception is a structure with a high center of gravity, such as a two-story or taller building. Stability is easily regained by increasing the width of the platform. The weight of people on platforms is generally not a problem to the engineers, as the load bearing capacity is sufficient under almost any circumstances. 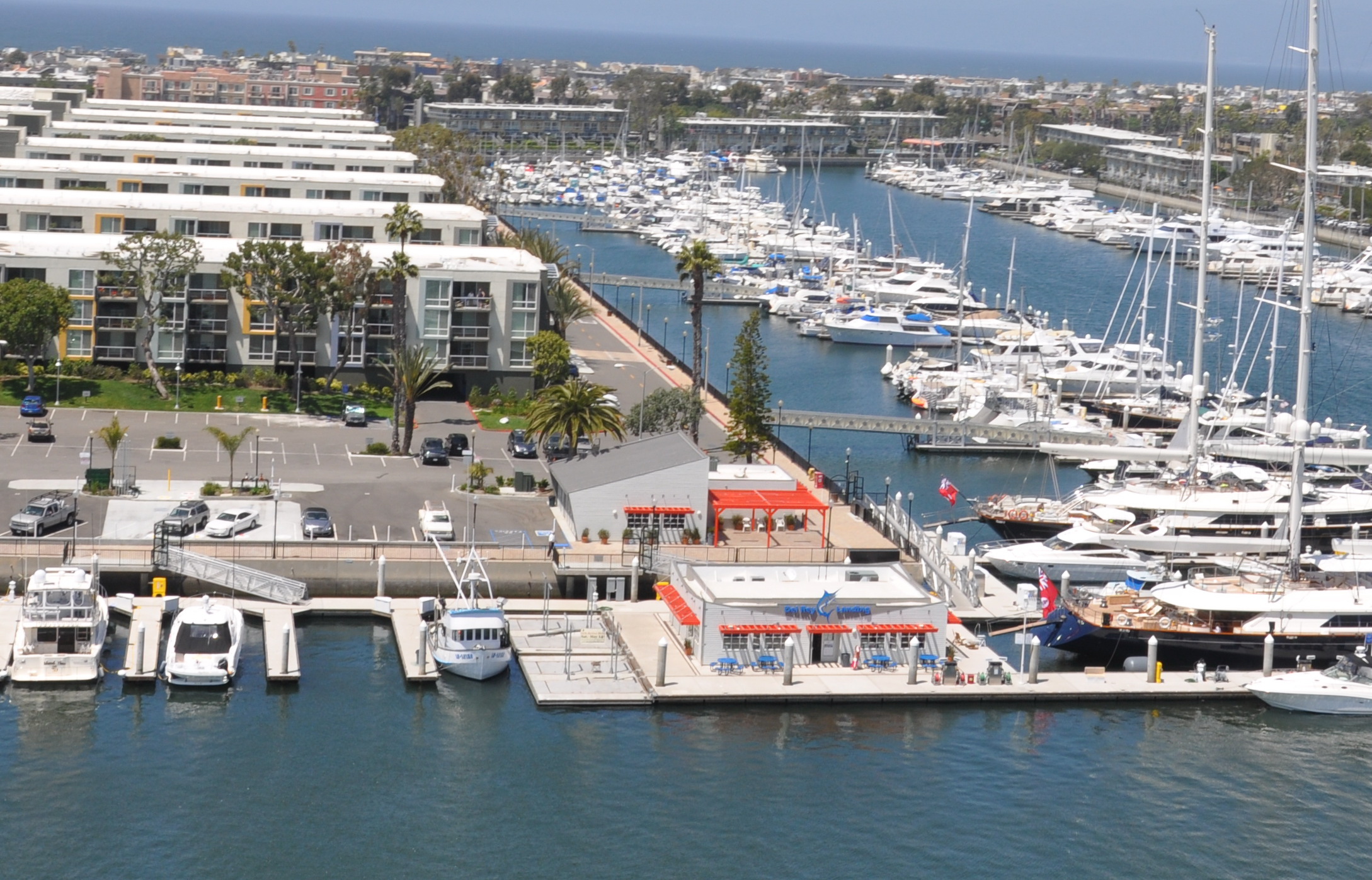 Weight and Balance
The displacement of a floating platform is easy to calculate, as length, width and draft are known. From that one can calculate the volume of displaced water and multiply the result by the water density. Seawater weighs 64 pounds per cubic foot and fresh water is slightly lighter at 62.4 pounds per cubic foot. Archimedes tells us that the weight of the platform and everything on it is exactly equal to the weight of the water displaced.

Dead loads are the platform, buildings and fixtures; live loads are people and movable items. In the past, strategies such as ballast tanks were engineered to level the structure and adjust the freeboard. “That’s not the way we look at things today,” Rasmussen said. “We tend to be more modular in our approach. We calculate live and dead loads prior to fabrication.”

Modules are filled with a precise amount of expanded polystyrene (EPS) so there is no requirement to have pumps in ballast tanks or leveling cells that might rupture and take on water. “If something unexpected happens, we have the ability to balance these structures post production, once they’re in the water,” he said.

“We engineer to the client’s unique requirements,” Funston said. “For example, we’re under contract to build a long floating platform in the Puget Sound area with internal ballast chambers in addition to an EPS core. The owner can trim out the structure if they change the way they use it.”

“There are two ways to handle flexibility and stiffness,” Funston said. “You can design stiffness in the platform to protect the building, or stiffness in the building so that the combination provides the required strength on a lighter, less expensive platform. Unfortunately, architects don’t usually know how to deal with a building on a flexible foundation. There isn’t a contractual or scheduling option for us to work collaboratively with the building’s structural engineer. As a result, we usually build stiffness into the platform to simplify the process for the owner and architect.”

Two Projects
One particularly high-profile floating platform is the ferry dock at the USS Arizona Memorial in Pearl Harbor. Hundreds of tourists visit the memorial daily to pay their respects. Nine modules 7 feet tall were built in Bellingham Marine’s Lynden, Washington, facility and shipped by truck and barge to

Hawaii where they were assembled. The platform is 20 feet by 105 feet with a 30-inch freeboard.

The curved pedestrian walkway at Meydenbauer Bay Park in Bellevue, Washington, is a match-cast, post-tensioned floating platform 300 feet long. The structure circumscribes a 250-foot radius terminating in a round viewing platform. “The 250-foot radius is a fairly tight arc,” Funston said. “Nothing on this platform is square.” 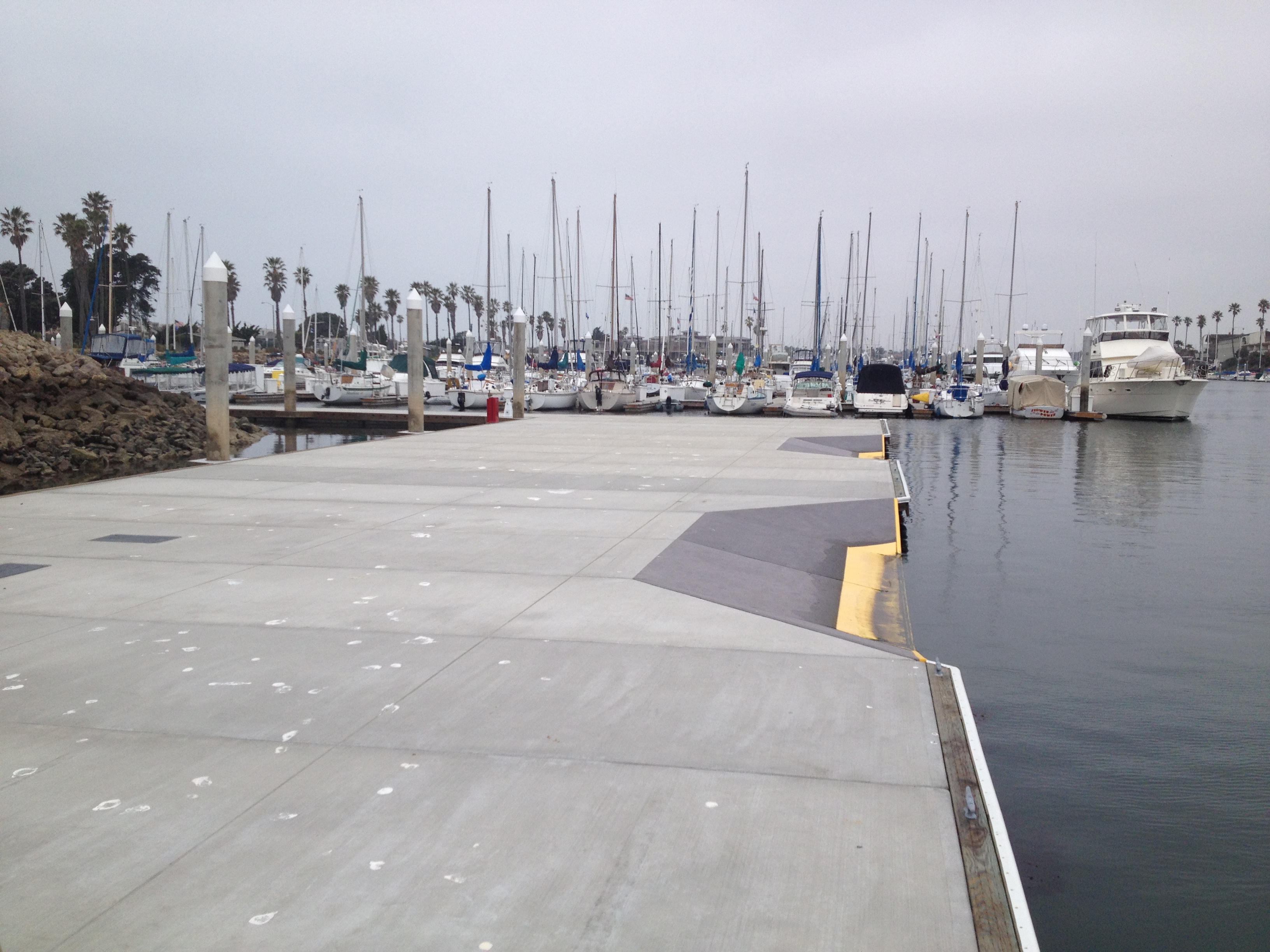 “The challenge was to control the geometry during casting,” Rasmussen said. “Both inside and outside walls are curved. The casting was done in a highly controlled environment. Working from a computer aided design a surveyor with an electronic instrument outlined the platform on the factory floor. Steel pins were placed in the floor at each control point to indicate corners of the modules. That allowed us to control the geometry and cast the modules with precision. Our factory floor is large enough to do the structure in two phases. We cast half the floats, then picked up the last module, moved it back to the other end and cast the other half.”

When assembled, the structure will be post-tensioned with twenty-eight 350-foot stranded cables. What happens to a curved structure when the cables are tensioned? Will it buckle? “No,” Funston said. “The cables want to straighten the structure and the geometry wants to buckle it. The opposing forces cancel each other out. It’s physics.”

Robert Wilkes writes about the marina industry from Bellevue, Washington.