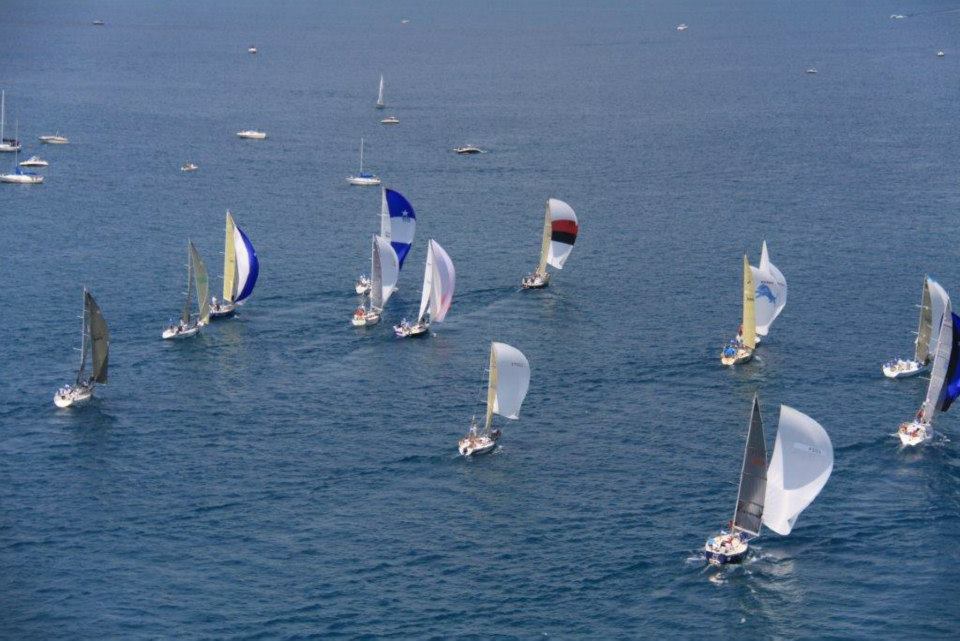 For Now, The Bayview Mackinac Race Is On

The coronavirus has not yet halted preparations for the 96th running of the Bayview Mackinac Race scheduled to begin on July 11, 2020.

“We’ve been doing this a long time, and everything is in place,” Chris Clark, the 2020 race chair said. “We don’t need to cancel at this point.” Like most everyone else, they are working to be patient and see how things progress. In an update posted on the race webpage, he stated: “The best thing I can suggest is to please be patient! This will end, the stock market will recover, and we will go race sailboats, it is what we do.”

Bayview Yacht Club, founded in 1915, is widely regarded as the premier sailing club in Michigan and the Midwest. Located on the Detroit River near the mouth of Lake St. Clair, it has been hosting the Mackinac Race since 1925.

About 200 boaters participate in the race and changes are being made to help attract a younger, new generation of boaters. “As we get closer to the 100th running of the Bayview Mackinac Race in 2024, we expect the number of boats and attention globally to increase to a level we have not witnessed in the past,” Clark said.

This year’s race will include a new class for sport boats, referred to as modern planning boats. “Racing has really changed,” Clark said. “Younger people are going for very high-performing boats.” The sport boats are not necessarily suited for the traditional course, because they spend much of the race travelling into the wind. “It’s not a lot of fun for them,” he said. “Those boats are very fast, but they are not designed for going into the wind.”

Clark said they spent about two years working to create a new course for the sport boats and got input from boat designers. “It really is a course that fits their boats. We wanted to make sure we were going to offer them a good, safe experience,” he said. “And we wanted to create rules to get the boats that we really wanted in that class.”

The Mackinac Race Authority requires at least eight boats in a class to guarantee a run. Clark said almost as soon as they announced the opening of the sport boat class it had met the minimum requirement.

The addition of the sport boat class is doing what it was intended to do – attract younger, new racers. Clark said of the first eight boats that entered, only one had competed in the race in recent years. The others were new competitors or those who had not participated in several years.

“The way sailboat racing works – you offer a good event and they will come.”

In another move to help attract new members, the club, which has about 1,000 members, began completely renovating the historic clubhouse in 2019. Clark said the new clubhouse will take advantage of the site’s billion-dollar view of Detroit. “It will really focus on the needs of modern lifestyle,” he said. “It will be a much nicer facility for events and our members.”

The race also got a new presenting sponsor this year – Atwater Brewery. The brewery was founded in 1997 and revived Detroit’s brewing tradition from its location in the historic Rivertown district.

“Atwater Brewery and the Bayview Mackinac Race are both Pure Michigan and Pure Detroit all the way,” Atwater owner Mark Rieth said. “Becoming a presenting sponsor of this great race is our way of not just supporting these elite sailors, but also supporting all Michiganders who enjoy the state’s waterways. Whatever the occasion, Atwater is all about having fun and drinking responsibly.”

The race has numerous sponsors that return each year to support and participate in the race. Sponsorships are important to help defray costs and to provide more services for the participants. Clark said he appreciates that the sponsors are not just giving money to have their names on the event.

“These are people who are investing in a lifestyle,” he said. “They participate in our passion. It really brings the best of the best together.”

An after-race party features an awards presentation, a band and food. “It’s an opportunity for our sponsors to shine,” Clark said. “The sponsors have direct contact with everybody that participated in the race.”

While the yacht club staff provides support for the race, Clark said there is “enormous membership involvement” with members participating as sailors or as volunteers. More than 200 volunteers from the Great Lakes area pitch in to help with a number of race duties, such as getting everyone organized at the starting line, providing safety check points, recording times at the finish line and completing paperwork.

“The volunteers are the absolute heart of the race,” Clark said. “It’s an army and it’s an army we are proud to have. We couldn’t do the race without them.”

The race begins July 11. From its traditional start in Southern Lake Huron, the fleet will head north on one of two courses. The shorter Shore Course covers 204 nautical miles (235 statute miles) along the Michigan shoreline heading west to the Mackinac Island Finish Line. The longer Cove Island Course is 259 nautical miles (298 statute miles) and takes sailors around a buoy off the tip of the Bruce Peninsula in Canadian waters before heading west toward the finish line. Clark said some boats finish in about 24 hours, others in 24 to 30 hours. The race will culminate with the annual awards party at Woodfill Park on July 14.

For more information about Bayview Yacht Club or the Mackinac Race: www.byc.com.