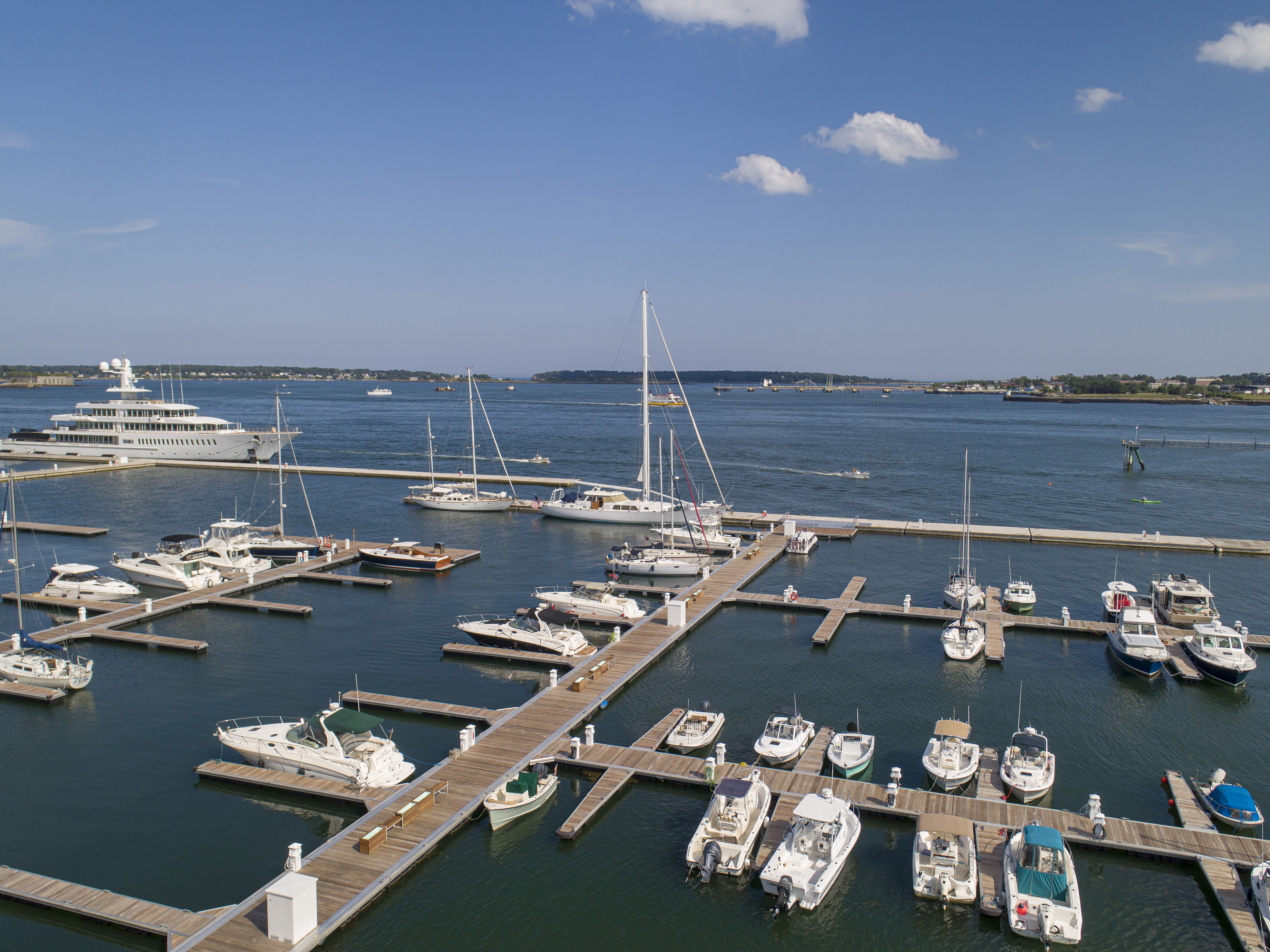 One of the first times Kirby Marshall of Applied Technology & Management (ATM) visited Fore Points Marina, he heard what sounded like a hurricane siren and held on to a power pedestal as waves rocked the docks.

In May, ATM completed the second phase of a $20 million project that included building a new wave attenuator, new docks, including megayacht slips, and rehabilitating existing docks. “There are no more sirens, and you don’t have to hang on,” said Marshall, ATM principal. “It’s very safe out there and it can withstand the winter storms.”

Property owner Portland Foreside Development Company contracted with ATM in 2016 to complete a comprehensive marina redevelopment feasibility analysis for an aging marina on the historic waterfront property in Portland, Maine.

Site Study
The marina’s location on Casco Bay exposed it to the harsh winter storms and the wake from daily ferry traffic and cruise ships that dock at a berth about 600 feet outside of the marina. During the off-season the docks had to be removed and stacked on land so they were not exposed to the winter storms. “It was a substantial challenge,” Marshall said.

ATM conducted a wave and wake analysis to determine what type of boats were going by and how often. “We had to ensure the docks and anchorage system could adequately resist the forces applied by large cruise ships,” Marshall said. “We overcame that with a massive 20-foot-wide wave attenuator.” SF Marina manufactured the 1,525-foot-long concrete attenuator in Sweden.

A chain and mass anchor system was used to achieve proper anchorage for the facility. Marshall said they chose that system in part due to the deep water at the site and challenging geotechnical conditions. It also helped improve the aesthetics because no anchor piling is visible above the dock. The naturally deep water meant they didn’t have to dredge. “So, that was a bonus,” he said.
The interior basin was built with less massive and more economical aluminum-framed floating docks with ipe decking manufactured by Structurmarine of Quebec, Canada.

The engineering and design work included coordination with the local Harbor Commission and presentations at public meetings involving the City of Portland and local harbor pilots.

ATM prepared and submitted grants to help fund the construction cost. For the initial construction, the project received a $1.5 million Tier 2 (federal) Boating Infrastructure Grant from the United States Fish and Wildlife Service. A $37,000 Tier 1 (state) grant was used for ancillary improvements. A third grant is pending.

Phase one construction began in November 2018 and included installation of the wave attenuator and dock construction, which included about 50 percent new docks and 50 percent improvements to the old docks.

Marshall said they ran all new utility lines for the marina, bringing it up to code and using the most sustainable materials they could source.

The inclusion of in-slip fueling for megayachts is a rare amenity in the region. Some of the larger boats can hold as much as 50,000 gallons of fuel, so ATM installed a high-speed fuel system that can pump up to 90 gallons per minute. “That was one of the innovative things we included,” Marshall said. “It really set this marina apart.” The fuel tanks are located on part of the upland parcel with space to add more tanks if needed.

The slips also feature in-slip pumpout capacity, 480-volt power, water and Wi-Fi. The facility also includes showers, restrooms, a laundry room and fuel dock.
The marina includes 150 wet slips, including 12 megayacht berths. The 500-foot side-tie megayacht dock is situated in about 30-feet of naturally deep water and provides docking for boats up to 630-feet long. “This will allow the facility to accommodate the largest yachts in the world,” Marshall said. Other slips provide dockage for vessels up to 65 feet. The design also includes a dinghy dock for people with boats moored in the bay.

Work on phase one was completed in time for the 2019 boating season. During the season, the marina hosted events for the captains and crew members. “Often times it is the crew that selects the marina, not the owner, so you want to keep them happy,” Marshall said. The marina also regularly hosts happy hours and yoga on the docks.

When interviewed in May, Marshall said due to COVID-19 restrictions they had been working remotely with the owner and contractor to complete construction. Work slowed some on the interior docks because the more stringent border restrictions caused delays in getting materials from Canada. “But there was enough other work to continue,” he said. “It’s kind of surprising; I thought it would be worse, but the impact was minimal.”

Market Demand
Although the boating season is short (May to October), Marshall said there is still a high demand for slips. “We learned the boating culture is engrained in the Maine lifestyle.”

The need for transient slips in the market creates high rates. “It translated to economic viability, even with the short season,” Marshall said. “The ROI is very strong because of the high level of demand.”

There was also a demand from locals who live on the nearby islands and commute to work by boat. “They wanted a place to dock their boats while they go to work or shop,” Marshall said. “This was an opportunity to provide for the transient boaters and cater to the locals.”

Marshall said one of the most interesting aspects of this project was designing it for different types of boaters. “It caters to a variety of different users,” he said.

During the first season, the market response matched what they anticipated, and they actually saw an even greater demand for residential and transient use. “Establishing a new destination is somewhat a gamble, but visitation was excellent,” Marshall said. 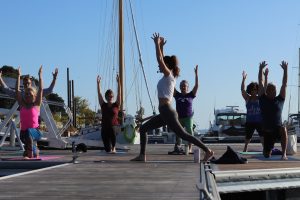 Portland Foreside Neighborhood
The marina is part of Portland Foreside Development Company’s plan to create a 10-acre mixed-used neighborhood featuring residential, retail and office space, restaurants, boutiques, art galleries, and live entertainment. The public spaces in the community will provide additional amenities for boaters.
“The new owner had a great vision for expanding,” Marshall said. “It’s a dramatic transformation of the site.”

The company has contracted with Island Global Yachting (IGY) to brand and manage the marina. Founded in 2005, IGY maintains a network of approximately 20 marinas around the world and focuses on providing the highest level of management and service for luxury yacht marinas.