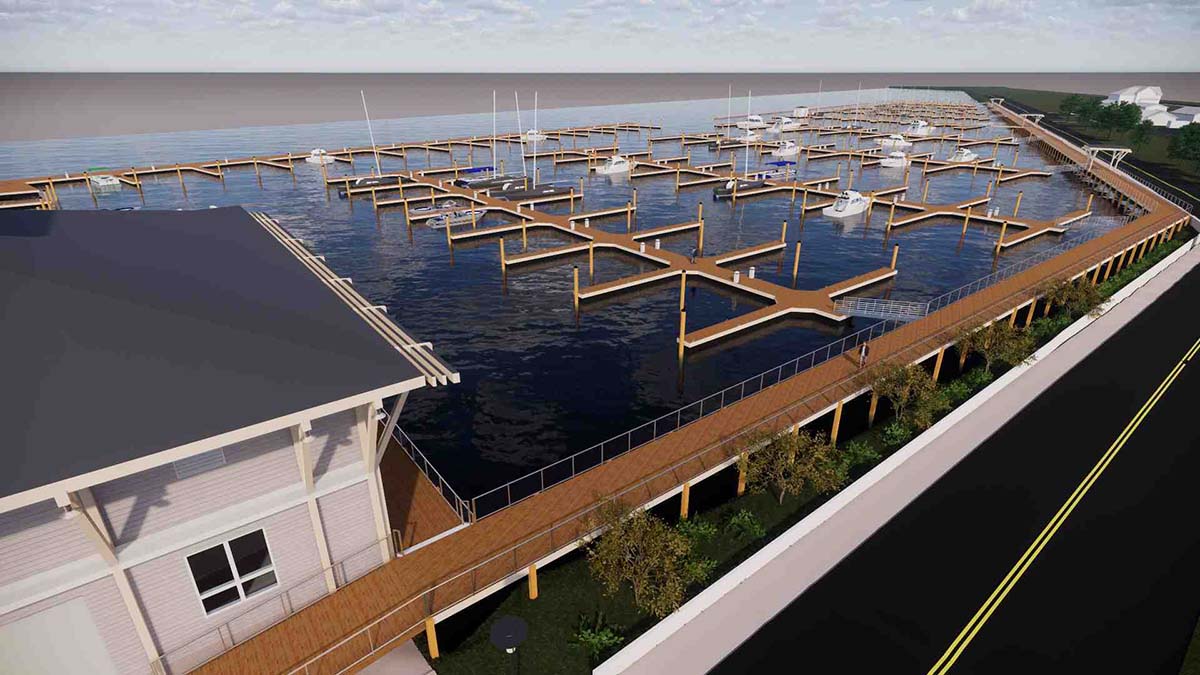 Renovations should begin next year at Old Point Comfort Marina, located on the former Fort Monroe Army Base in Virginia. The Fort Monroe Authority, which has operated the property since the federal government turned it over to the state about 10 years ago, chose Pack Brothers Hospitality to redevelop the marina district at the historic fort. The project, which will be called 37 North at Fort Monroe, will include the complete rebuilding of the existing 300-slip marina, plus renovation of some existing buildings and additional construction for a new restaurant, conference center, and boutique hotel.

The redevelopment proposal from Pack Brothers Hospitality, which already operates Smithfield Station and The Surrey Seafood Company in Virginia, was chosen out of 19 bidders. The company was awarded a 40-year ground lease for the property.

About half of the slips in the existing marina were rebuilt in 2003, and the other half date back to the 1980s. They had been used by service members prior to the fort’s closure, and open for the past decade, but were not in good repair. Pack Brothers took over operations in June 2021 and has been cleaning up the property ever since.

“We’re doing some of the low-hanging fruit while we go through all the processes to rebuild the marina,” said Randy Pack, company president. “We’ve been cutting the old lines off pilings, pressure washing docks, making sure that the power works. We’ve installed a new pump for the sewage; they haven’t had a pump there in three years.”

The plans call for the replacement of the existing wood wave attenuator with a floating concrete wave attenuator. “That will also provide us with 1,600 linear feet of dockage so we can cater to megayachts. There’s 20 feet of water throughout the marina, and we’re right at the mouth of the James River, with easy access to the Chesapeake Bay, and just 14 miles to the ocean,” Pack explained. “We’re also going to provide fueling and high-speed fueling; our goal is to be able to deliver 10,000 gallons in three hours.”

Pack Brothers also wants to completely replace all of the existing docks with floating timber docks with an ipe finish. “The footprint will be very similar to what’s there, but we are changing slips so that they accommodate more of the modern boats that stay in the water year-round. We’re catering to larger boats, 35-feet plus,” Pack said. Smaller boats will still be welcome, but they will have to use the larger slips.

The work will also include a combination of new steel and wood piles and a 16-foot marginal wharf that will connect all the piers. Some of the slips will be reserved for transient boaters; the company has applied for a Boating Infrastructure Grant.

The company is waiting for approvals from the Virginia Marine Resource Commission (VMCR) before it can start. It hopes to have approval by the beginning of 2022, and to get started on construction sometime in spring or early summer of that year. The reconstruction will take place in phases so that current slip holders will not be displaced.

The electric to the slips will be upgraded and will include 100-amp, 240-volt service for the bigger boats. The project will also include the construction of a new pool, a new marina office with small ship store, and a 150-seat restaurant above. The new bathroom facilities will be individual rooms. “We want really great bathroom facilities for our guests so that when they are traveling with their families and want to take a shower, they will really feel refreshed,” Pack said.

Once the marina work is underway, the Pack Brothers will work on the design and construction of the other amenities on the property. They will include a 90-room boutique hotel built mostly over the water, a conference/events center and a large 500-person restaurant. The company will repurpose two existing buildings on the site and build additional space as well.
Pack said the goal is to have the marina part of the project completed in about 18 months from the beginning of the work. The other work will take a few years.