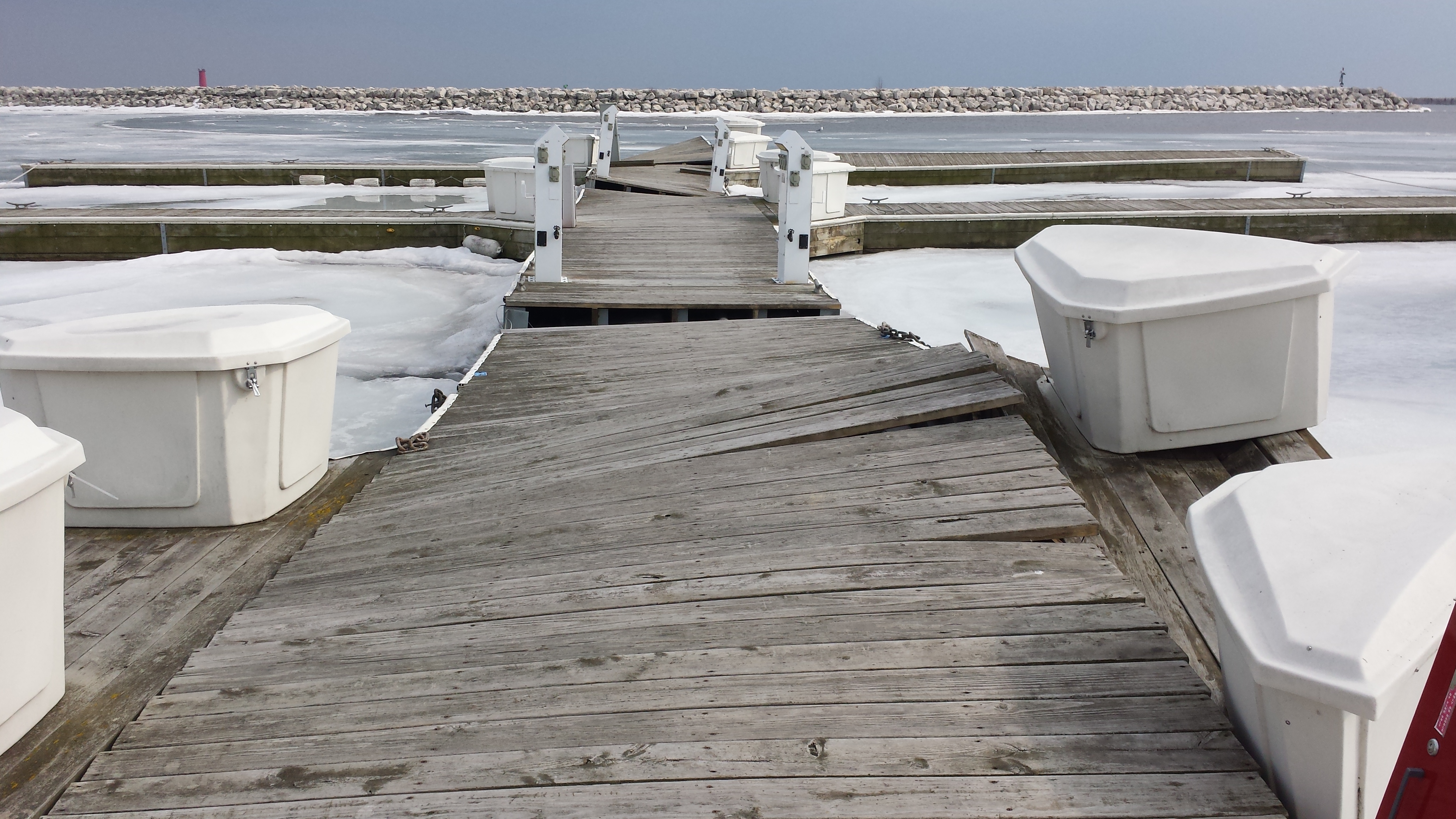 Frozen Part I: Cold, Ice and the Problems They Pose for Marina Design

Unlike Elsa from the Disney movie Frozen, the cold definitely bothers marinas. Beyond the seasonal aggravations of protecting plumbing from freezing or having to plow the parking lot, cold weather poses serious challenges to the design, performance and longevity of a marina. In the U.S., many people assume that cold is only an issue for the more northern states. In reality, however, there are frequently more insurance claims due to cold-related damage in Tennessee, Kentucky, and even northern Georgia than happen up north.

Accounting for cold conditions and its impacts can significantly change the design and operating requirements for a marina. Unfortunately, those requirements all too often become an afterthought, or worse, no thought at all. Part one of this two-part series will explore the key problems that cold, ice and snow pose for marinas, and the damaging forces they can inflict on boats and marine infrastructure.

Cold weather design demands both above-water and below-water perspective on the problems it causes. Starting above the water, even if a marina basin never freezes or the freezing is only slight, that facility is still at major risk due to the consequences of snow and freezing spray. Depending on the amount of snowfall, a marina could be at risk for sinking floats.

Snow has a density of roughly 20 pounds/cubic foot. Six inches of snow laying

on a 3- by 30-foot floating finger pier has the same impact on dock freeboard as four 200-pound men standing on that finger. While the condition is hopefully temporary, it still poses a risk for pushing utilities and electrical connections under the water. Structurally, snow loads can potentially cause a serious twist in a dock system, leading to damage at the connection points or other breakage.

Covered Slips and Cold
Covered slips pose an even bigger problem, especially in more temperate areas that normally do not freeze solid. If the snow falls straight down, it creates the same weight-bearing problem outlined above. The potential for serious damage increases if winds cause the snow to drift, shifting the load to one side of the slip’s roof system. This makes the entire floating dock system tilt or list to one side.

Roof systems on floating docks have very light-weight frame assemblies, minimizing the need for added buoyancy (and reducing cost) to the base dock system. But these very slender frames have little if any resistance to off-center loading. That means if the dock is suddenly leaning a few degrees due to uneven snow accumulation on the roof, then the roof’s frame is no longer carrying the vertical load axially down its support members. If these thin members bend too far they simply fold, and the roof collapses. This results in damage not only to the docks, but also to any boats moored beneath them. The problem has become so prevalent that marine insurance companies are beginning to view certain covered-slip systems as uninsurable in certain locations.

Now let’s dive below the water – though because it’s frozen, that may hurt a bit. Without getting into the science of ice, which is akin to the complex study of waves, it is helpful to understand the problems that emerge at various stages of ice formation, and what can and cannot be done to address them.

First, it is important to recognize the differences between freshwater ice and 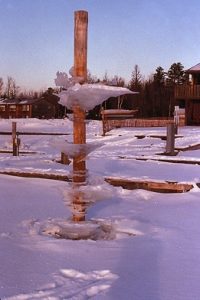 sea ice. While there is some commonality, there are a few key differences that require different solutions for a seawater versus a freshwater marina. Sea ice contains salt-molecule contaminants trapped between its ice crystals, while freshwater ice does not. When saltwater ice has grown thick enough that some of it manages to survive all the way to the next freezing season, that ice becomes what is called multi-year ice; it is now largely the same as freshwater ice, as the salt molecules have been expelled through the melt cycle. Freshwater ice has a higher crushing strength than saltwater ice, but that also makes it more brittle.

Frazil and Adfreeze
The characteristics of ice are largely related to air and water temperature. In the earliest stages of ice formation, individual crystals begin to form on the water surface and slowly cluster together to begin forming a sheet. For freshwater ice, that happens at a water temperature of about 32 degrees F, and in saltwater at about 28 degrees F. If the water is very calm, its temperature can often drop several degrees below freezing without ice crystals forming on the surface. This is known as supercooled water, and when this occurs, it frequently has unfortunate consequences. If some sort of turbulence suddenly agitates this supercooled water, it instantly crystallizes, with millions of crystals exploding all at once. If this happens near a city’s water intake, the entire water supply can be blocked off. There are even reports of large ships passing through an area of quiet, supercooled water and suddenly getting stuck in a 20-foot thick layer of slushy ice called frazil. 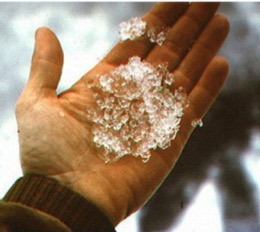 Once a solid ice sheet has formed, the rate at which it increases in thickness is largely predictable as a function of time and temperature. There are other important properties of ice also related to temperature, including its bending (flexural) strength and its compressive strength. These are the values needed to predict the force an ice sheet can apply to a dock structure. The compressive strength of ice can be as large as 400 psi, but that only occurs in the coldest days of winter, and typically at a time when the ice sheet is largely stable and not able to move around. Current design codes in Canada and the U.S. recommend using a range of 200 psi to 250 psi for estimating compressive forces from ice. But ice is also similar to glass in that it is strong in compression, but weak in bending (flexure). The bending strength of ice is no more than half and may be as little as a tenth of its compressive strength. Part II of this article will explain how to leverage that reality to design solutions for ice sheet problems.

Contrary to the way we usually view ice, it can be very sticky. In fact, that property is one of the main causes of ice-related damage in more northern zones. As ice grows against a pile, it actually develops a strong mechanical bond called adfreeze. The strength of that bond is dependent on what the pile material is; if the pile material is thermally conductive, the ice may actually grow thicker than the rest of the surrounding ice sheet, locally making that ice stronger. This stronger, stickier collar of ice provides the basis for ice jacking of piles.

When looking out at a frozen body of water, people often assume that once it is frozen, the ice cover is fixed and static. In reality, the frozen cover of a body of water is still very responsive to the waters beneath it; depending on atmospheric conditions and winds, ice cover can rise up or down, or even tilt. If the locale is coastal, there may even be a tidal influence causing ice cover to rise and fall. Between each rise and fall, the ice frequently will have a chance to refreeze around the pile. If the adfreeze bond is stronger than the holding friction the pile has with the bottom, the moving ice sheet can then tug the pile up and out of the lakebed or seafloor. Each cycle might only advance the pile upward a few inches, but a pile can be jacked up many feet over a very short time period. Figure 4 shows several examples of ice jacking, the top two of which happened in as little as one night.

The ultimate nemesis to a marina is a moving ice sheet. The weight and strength of the ice is coupled with the force/momentum of the ice’s movement, plus the effects of waves and currents that may be occurring concurrently, often to devastating effect.

Driven by wind or current, an ice sheet can move as a single mass against a dock or wall. This applies extremely large loads and can cause mooring connections to fail, seriously deform a dock, or even break it apart. If the ice sheet is not stopped, it can crawl up and over walls, move armor rock like a bulldozer, and even damage upland facilities. If the ice sheet is broken, the floes of ice will individually impact against piles and other structures. While this sounds as if it might reduce the resulting damage, due to the fast strain rate (how quickly the load is being applied by the wave motion) the instantaneous strength that the ice develops and exerts is much greater. This is analogous to slapping your hand on a water surface. This surface offers little resistance under normal conditions, but it can momentarily be hard as a rock if you slap it fast enough. Ice tossed by waves and currents can break piles and puncture steel in some cases.

Frozen Part II will look at ways to solve or mitigate these problems posed by cold and ice. It will explore methods to control or limit the movement of ice sheets, discuss strategies to reduce ice and snow loadings on docks, and address tools and methods to minimize the formation of ice and its impacts.

Jack Cox is a Principal Coastal Engineer with SmithGroup in Madison, Wisconsin. He can be reached at 608.327.4401 or at Jack.Cox@smithgroup.com.