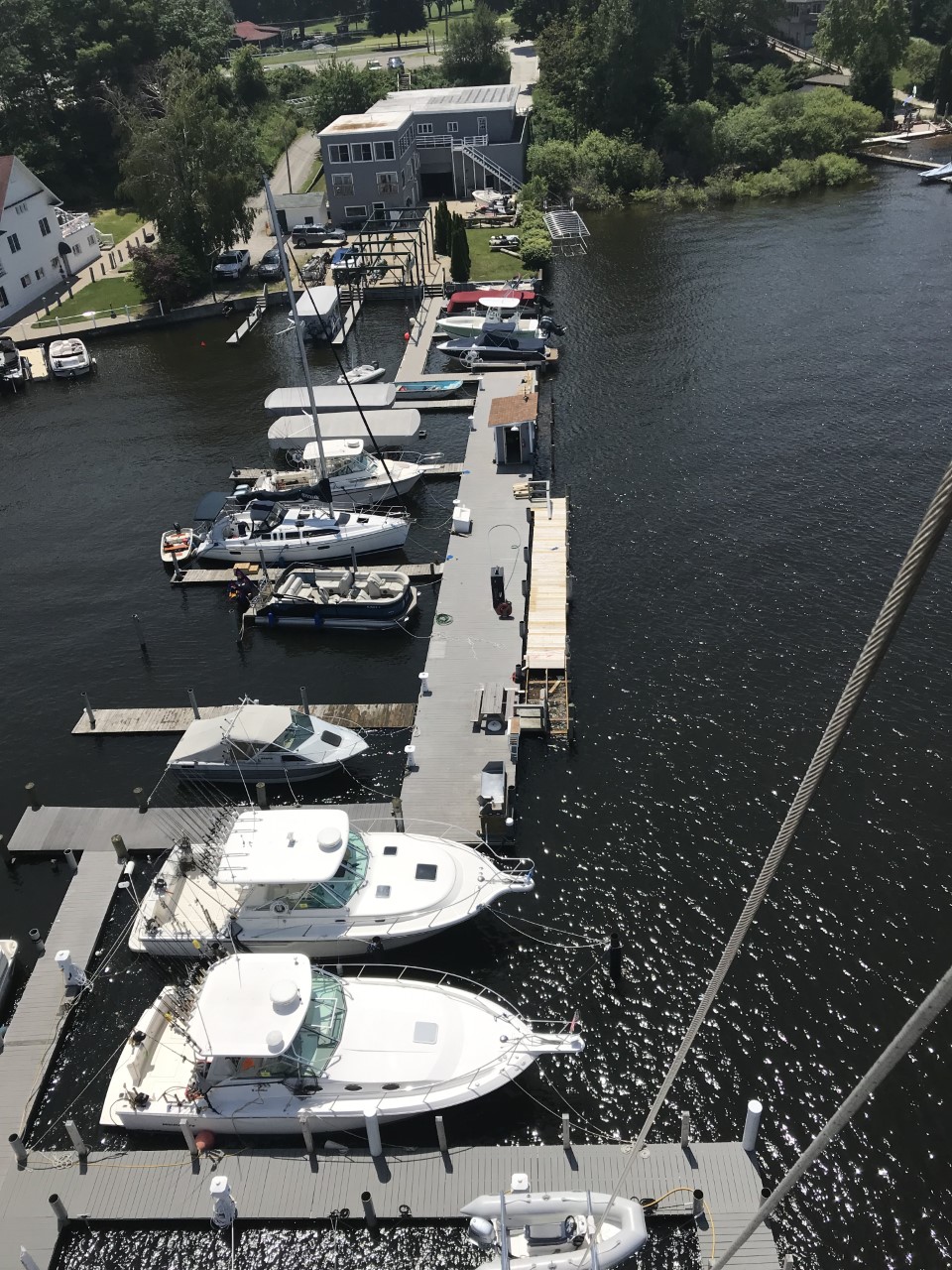 For several marina owners and operators, keeping Michigan waterways clean is personal. They’d grown up in these waters, watched them become degraded by pollution, and have now become part of the solution.

Nicki Polan, executive director of the Michigan Boating Industries Association (MBIA) commended those who have been certified. “MBIA encourages all marinas to pursue this voluntary certification,” Polan said in a news release. “It is not difficult, and there are both financial and environmental gains that come with this effort.”

The Clean Marina Program (CMP) was started to preserve and protect Michigan’s greatest resource, the Great Lakes and its connecting waterways. The certification process begins with a pledge to participate in the program. Participants then either attend a workshop or go to the online classroom to review best management practices and to fill out a self-evaluation checklist.

After making improvements based on the evaluation, A CMP certification specialist visits and evaluates the facility’s environmental stewardship. When they reach established goals, they receive their designation.

Aside from the personal stewardship aspect of gaining certification, there’s a business benefit, too. According to the Michigan Boating Industries Association, nearly 60 percent of boaters surveyed by the Department of Natural Resources in their recent boater survey would prefer to go to a Certified Clean Marina over a non-certified marina.

An Easy Process
Family-owned Klave’s Marina president and co-owner Kerry Klave said the designation offers proof of what he and his staff had already been trying to do.
Klave’s has been servicing the Portage Lake Chain of Lakes, a seven-lake chain, for more than 60 years. They’re located near the areas of Pinckney, Brighton, Howell, Hamburg, Gregory, Ann Arbor and Chelsea.

They have 11 full-time employees (they add several part-time positions in the summer), 76 wet slips and winter storage for boats. They’re a full-service marina that caters to pontoon boats.

Like others whose marinas were certified this year, Klave said the process was pretty simple and provides proof to their customers that they’re trying to be responsible for the environment, aiming to keep the area pristine for generations to come.

“I grew up here and I’ve seen all the changes and we’ve learned over the years how to keep things nice,” he said. “It wasn’t terribly difficult since we always tried to be clean,” he said. “But we learned a lot in the process. We learned some things we weren’t aware of and we put some new practices in place.”

He said it was helpful to know there are guidelines that marinas can follow to help in the process. The major change he made was to improve signage. “I’m just proud that we’ve gone through it,” he added.

Daniel Pearson is the third-generation owner of Ryde Marine, located on Crooked Lake in Alanson, which is connected to four other lakes, which in turn connect to Lake Huron; they’re called the inland water route. Ryde Marine was founded in 1922, has 39 slips and provides service, sales, rentals and repairs. There are six employees.

Pearson said he became interested in the program after he learned of a small marina taking part in it. He’s now noticing large marinas in the area interested in participating, which is a good sign.

Like Klave, Pearson had also been working to be a good environmental protector and once he reviewed what he had to do for the program, it was pretty simple.

He said some marinas may erroneously believe it requires more work to participate in the program than it actually does. Also, like Klave, most of his improvements included signage, such as identifying invasive species and prohibiting dumping in the water.

His marina has been part of the community for many years, he says. Every Sunday in season the marina has a potluck picnic dinner where community members grill meats and share food. They’ll appreciate the effort Ryde Marina took to care for their waters, he says.

The marina has 19 slips, a hoist out system, a fuel dock, and a small ship’s store. They are boat dealers and provide marine services. South Shore has about nine employees. They’re the first gas dock on the lake as boaters enter from Lake Michigan. The marina’s been in its location since 1945 and McCormick has lived on the lake most of his life. White Lake, he says, was a BPA hot spot, with businesses discharging into it, but they’ve really cleaned it up in more recent years. “It’s nice to be a part of that effort,” he said.

Despite obstacles posed by COVID-19 and the highest water levels reported in 120 years of recordkeeping, they sought certification this year.

He says the process “was very well laid out.” He took the certification course at MBIA’s winter meeting last year, went through the MBIA check list over the winter, got things “up to speed,” had his formal interview in July and was notified he “passed” in October. As a result of program participation, he says he’s recycling more at the facility. On a day-to-day basis, people are being more respectful of the environment.

He said it was exciting for his employees and him to earn the certification. He also says if he could help another marina go through the certification process, he’d be happy to do it. “I think everybody should be part of this,” he said.

An Important Water Source
According to an article in the Michigan United Conservation Clubs (MUCC), the Great Lakes hold 20 percent of the world’s freshwater and 84 percent of the drinkable water in North America.

Problems facing the waters in Michigan, like other places around the country, are varied. Pollutant runoff, such as motor oil from parking lots, leach into the soil and make their way into the groundwater.

Invasive species, which are plants, animals or bacteria that enter an area and harm or alter the region’s environment or economy, are also a threat to waters. There are nearly 100 invasive organisms in Michigan and over half of them are aquatic. Marinas in the Certified Clean Marina program often have to increase the signage alerting people about these invasive species.

Finally, what was developed as a convenience has become a waterway plague, plastics. Specifically, microplastics have become a scourge in Michigan waterways. These are pieces of plastic the size of a grain of rice or smaller.
“Waterways around the world are polluted with microplastics, with the Great Lakes and its tributaries having some of the highest microplastic pollution levels worldwide,” the MUCC articles states. “This can not only be a problem for plant and animal populations but also with humans. Think about it if a fish ingests microplastics and you eat that fish you, in turn, have eaten microplastics without even realizing it.”

A Source of Pride
Mark Breederland is president of the Clean Marina Foundation board of directors and the northwest district extension educator of Michigan Sea Grant.
He explained that MBIA represents about 139 private marinas and harbors located on the inland waters and the Great Lakes, all of which are eligible to apply for Michigan Clean Marina certification. In addition, marinas and harbors that are not MBIA members and not participating with the State of Michigan are eligible.

He said earning the certification is a point of pride for many. “I think most people pursue the designation because it is a tangible peer/voluntary-driven business and community stewardship effort on our wonderful freshwater treasures,” he added.

“It is a win-win-win: boaters who do business with marinas want to steward the waters they recreate on; marinas and harbors want to showcase the diligence they go to for stewardship (in conjunction with boaters); and there is economic benefit with risk-reduction and possible lower insurance liability and general positives for Clean Marina marketing,” he said, adding many on the water will opt to do business with a certified Clean Marina.

“Peer leaders in the marina and boating industry have championed the program and it is attractive to join and proudly fly the Clean Marina flag!”