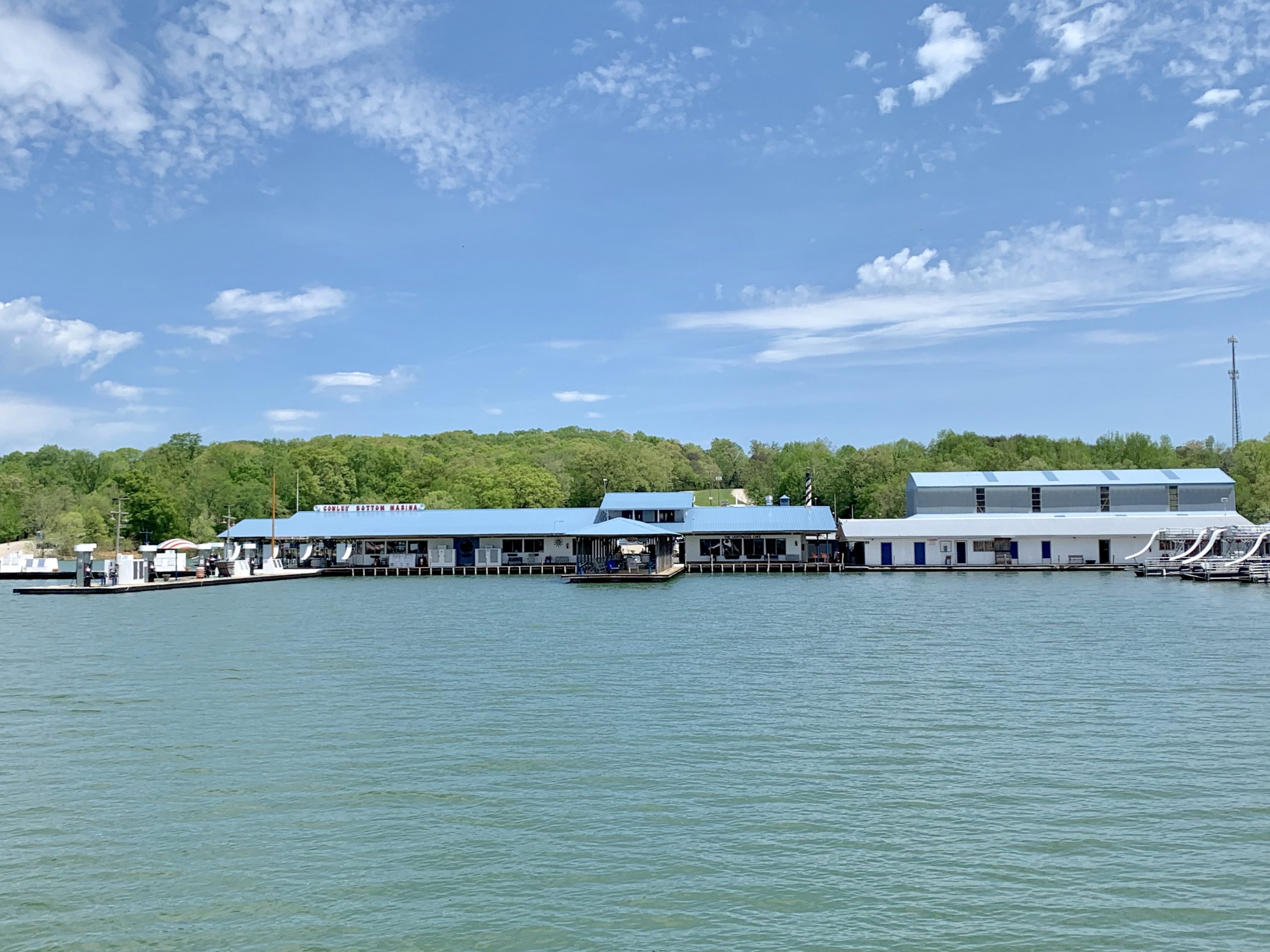 Lake Cumberland Marina Rebuilds After a Series of Devastating Events

A trifecta of natural disasters struck the Conley Bottom Resort, which straddles Lake Cumberland in Monticello, Kentucky, between February and May of 2019. A flood raised the water to over 740 feet, the highest level it’s ever been, wiping out everything in the campground, from the electric to the bathhouse.

Then in April, a severe windstorm blew through the area, tearing up some trusses and slips.

And on May 20, just days before Memorial Day weekend and the unofficial start of boating season, a devastating fire ripped through the marina, causing extensive damage to the main facility, destroying the dock, the ship’s store, the café, their offices, the boathouse with the lift, the employee break room, and the parts room. Marina owner Fred Piercy helped fight the fire on a fireboat and was able to spray down and save several slips; the gas dock was also saved.

There are not many business owners who would consider themselves to be blessed after a series of damaging events, but Piercy and his daughter Amber Rector think otherwise.

“The Lord has blessed us tremendously. It is amazing that we had the fire we had, and no one was hurt. We didn’t lose any private boats or rentals,” said Rector, who is the company’s office manager along with her brother, Knox Piercy.

In equal parts undeterred and determined, Piercy gathered his employees the day after the fire and set out a plan to rebuild immediately. In fact, despite the marina sustaining between 6-8 million dollars in damage, there was never any question that they would rebuild. “We never give up. We don’t know when to quit so we keep on going,” said Piercy.

“This is our home. This is all we know,” added Rector. “Everyone in the family works here, and so many customers have boats here. It’s all a huge family.”
Like they did when they were hit with the flood, the house crew immediately got to work the next day and began the process of making necessary repairs. Although they had their work cut out for them in the months that followed, Conley Bottom opened for Memorial Day weekend as scheduled, and it was business as usual for the rest of the season, as loyal customers flocked to the resort in droves for their regularly scheduled getaways.

It Runs in the Family

Lake Cumberland is the main attraction of Lake Cumberland State Resort Park, a Kentucky state park. Originally built as a reservoir for flood control and a source of hydroelectric power, Lake Cumberland is the largest manmade lake east of the Mississippi, covering over 65,000 acres, with the lake over 100 miles long. Land activities are also available, as mountains surround the area, but the lake is the biggest draw to the area. “It has 1,250 miles of shoreline, which is more shoreline than the state of Florida,” said Piercy.

Conley Bottom Resort opened in the 1950s, a private company that has been family owned for three generations, since Piercy’s father-in-law, Charlie Denney, took over the lease in 1973. Since then, the company has been run as a family business, with Piercy as the owner and his children as managers, plus several other family members involved.

The family dynamics extends to the guests. While other marinas in the area serve clientele that are seeking a party atmosphere, Conley Bottom Resort intentionally maintains a family atmosphere through and through. “When customers are here, we want them to feel like family, too,” said Rector, adding that many guests have been coming for years and years.

The employees are treated like family as well. Rector said that after the fire, all employees, which number 75-80 in the high season and 35 in the winter months, now have an app on their phone called Homebase, which is used to communicate with each other, clock in and clock out, and to even give employees a shout out for a job well done.

“We allow employees to take houseboats and pontoons out; it helps business in the long run, so if anyone asks questions, we can answer them,” said Piercy.
The resort offers waterfront lodging on the premises as well as overnight camping facilities, including permanent RV sites. Other amenities include a café and a ship’s store, along with rentals of a variety of boats, including three sizes of houseboats, pontoons, jet skis, runabouts, fishing boats, kayaks, paddleboards, and personal watercraft. The marina has 1,260 slips, most of which are full except for some open slips for houseboats.

After the Fire
Piercy mobilized his crew the day after the fire and got to work on the rebuilding process. The marina crew rebuilt the lost docks on steel tanks. All of the electrical was destroyed and was completely replaced and upgraded to the 2020 National Electric Code. The renovations will result in enlargements of certain areas as well as the addition of new amenities.

Though it already had a café, Conley Bottom will now have a two-story restaurant, with the upper level overlooking the lake. They also expanded the size of the ship’s store, as the previous one was too small for the amount of merchandise that they sold. As the café was closed for a time, they started to sell pizza and ice cream in the store, which they will continue to do even after the restaurant reopens next season.

The renovation will also include brand new amenities, such as a fitness room, a washer and dryer, and additional showers and bathrooms.
Though thankfully the company already had a fireboat that they put into action to help fight the May 2019 fire, and they already have regular safety meetings with their staff, the renovation prompted them to put in a sprinkler system at the dock.

Piercy estimated that the rebuilding process will cost in the neighborhood of four million dollars.

Effects of the Pandemic
If a flood, windstorm and fire could not keep Conley Bottom from operating as usual, neither can a global pandemic. Although acknowledging that COVID-19 is a terrible virus with many people having lost their lives, Piercy said that for the business, it has been profitable. “2020 was the best year we ever had. Going out on a lake is the perfect thing to do in a pandemic. You can go out on the lake in the boat and not be in contact with people. It was a good year for us.”

Still, Rector said that they were unable to hold their annual customer appreciation event, held each August, though, with the approval of the Kentucky Department of Health, they did host their Halloween campout.
The marina is already hugely popular with thousands upon thousands of guests, many of whom are repeat visitors, who come not just from Kentucky but from states as far away as Michigan and Texas to experience the glittering lake and life on the water.

Despite the events of 2019, hopes are high for 2021 and beyond, as the owners continue the rebuilding process. In addition to the restaurant reopening next year, Piercy said that in the future, they are considering an inflatable water park, and they’d like to build more cottages and campsites.
But no matter what life throws at the marina, Conley Bottom will end up on top, despite the length of time it might take to get there.

As Piercy said, “We do the difficult right away; the impossible takes us a bit longer.”