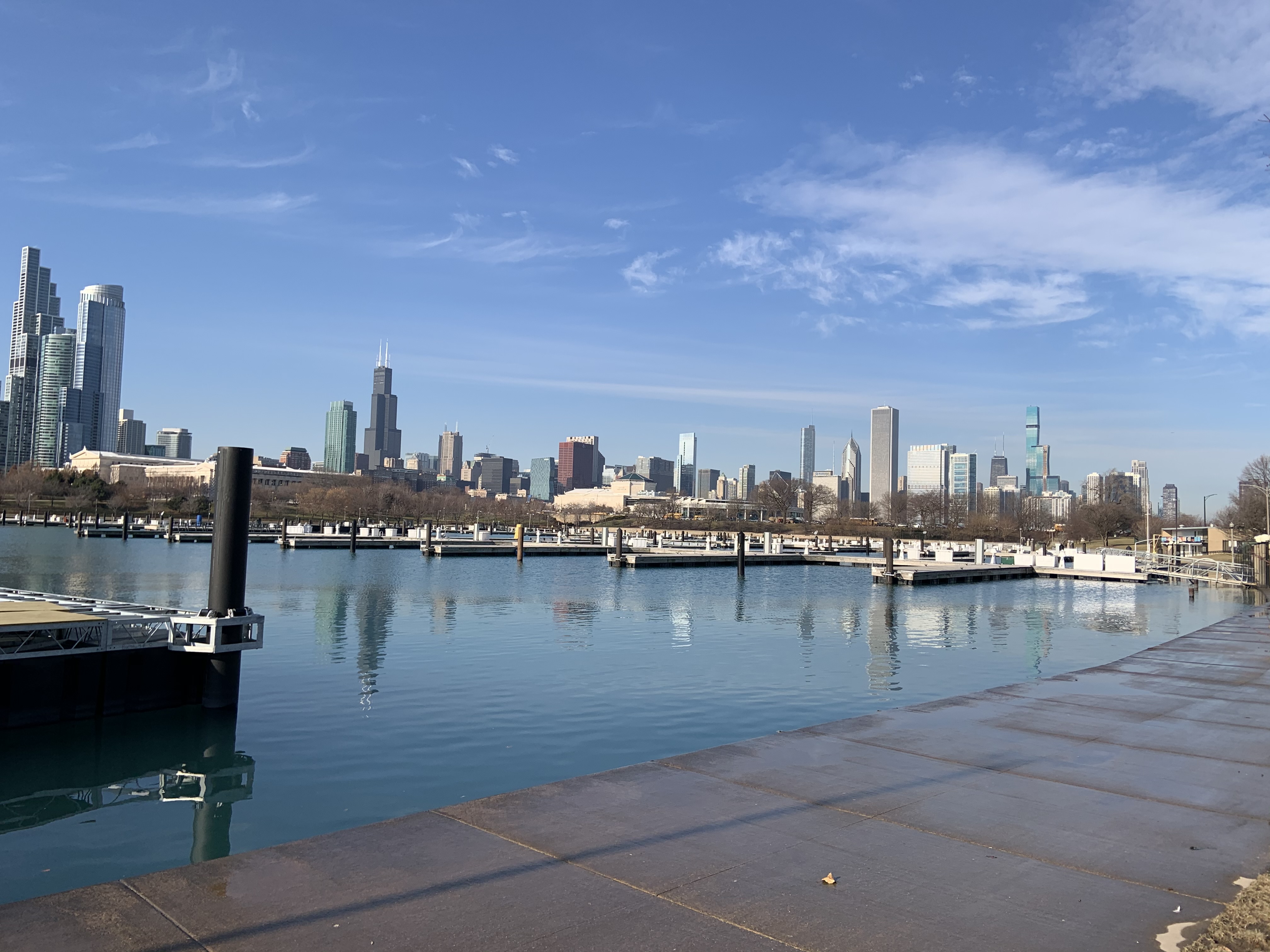 Lake-Level Change on the Great Lakes Part One: Forecasting New Highs and Lows

Several well-publicized climate projections have highlighted the world’s failings to curb the rise of heat-trapping greenhouse gases, resulting in increasingly dire protections for global climate change generally, and associated impacts such as sea level change. The United Nations Intergovernmental Panel on Climate Change’s most recent report states that, “Global mean sea level is rising (virtually certain) and accelerating (high confidence).” Around the globe this will play out in different ways since “sea level does not and will not rise uniformly.” The variability is a result of factors such as thermal expansion and ocean dynamics, as well as the fact that in certain regions higher ocean levels may be offset locally by geologic rebound from the sudden removal of the weight of ice sheets.

No such luck for the continental U.S., where sea levels are projected to rise between one and two feet by 2050. Along the Gulf Coast, where the land is both subsiding and eroding due to interruption of natural sedimentation processes, relative sea level change will be much higher.

“It’s not a question of if but when,” Elizabeth Rush reports in her remarkable 2018 book Rising – Dispatches from the New American Shore, in which she adroitly and lyrically recounts stories from vulnerable coastlines around the United States. She visits communities as varied as Staten Island, New York, Isle de Jean Charles, Louisiana, and San Francisco Bay, California, and documents personal stories as individuals respond to permanent alterations in their landscapes.

Over the next 30 years, these same scenarios of change and vulnerability will be repeatedly played out for communities, municipalities and industries that rely on the coastal environment. The recreational boating industry and the marinas that are the backbone of the industry are already feeling these impacts, facing risks that will continue to grow with rising sea levels and higher intensity storms.

While the prognosis for the oceans and the marinas situated along them is one of how much and how fast, the general direction of that change is certain. In the Great Lakes, however, where a large proportion of the U.S. recreational boating market is concentrated, matters are altogether less clear. Although Great Lakes water levels have a long history of fluctuating within a range of relatively consistent lows and highs, the speed and extremity of that cycle appears to be changing. How can marina owners and operators predict and prepare for the impacts these changes are likely to have?

A More Variable Future
While regional forecasts of climate impacts have been available for many years, complex systems such as the Great Lakes are subject to considerable variables. This is especially true of water levels, which can be driven in different directions by precipitation and evaporation. These two meteorological variables are themselves complicated by a multitude of other factors that are all on unknown trajectories. This includes the duration and extent of winter ice cover, along with regional variations in the distribution and intensity of rain and snow.

The best available scientific data point toward increased variability. Empirically this has been borne out in Lakes Michigan and Huron by the recent swing from record low levels in 2012-13 to record high levels in 2018-19, with the prospect of further record highs being broken in 2020. Similar patterns have been observed across the other lakes. The U.S. Army Corps of Engineers Detroit District publishes a monthly bulletin of lake levels; it illustrates the recent past and a six-month forward-looking projection shown against monthly highs, lows and averages as reported by NOAA over a century-long period of record.

At the end of August 2019, the Great Lakes Basin had experienced its wettest 60-month period in 120 years of record-keeping. In October, measurements by the Corps showed every Great Lake well above their long-term monthly averages: nearly 3 feet higher on Lakes Michigan and Huron, with Lake Erie 29 inches above, Lake Ontario 20 inches above, and Lake Superior 15 inches above.

While the Great Lakes are currently experiencing their annual late year declines, Lakes Michigan and Huron are still predicted to start the new year 11 inches higher than they were in January 2019. With wet weather in the early 2020 forecast, the Great Lakes are expected to keep rising into spring.

A word of caution, however, is warranted. As with many aspects of life, humans reporting and speculating on likely future scenarios are subject to a phenomenon known as confirmation bias: the tendency for the already known and familiar to seem most likely in the future. This is part of what drives Chicken Little-style warnings of future record highs when lake levels are currently high, and similar doomsday scenarios of continually falling levels when they are low.

This was the case as recently as summer 2013, when a lengthy Milwaukee Journal Sentinel article on the topic was headlined “Does Lake Michigan’s record-low water level mark beginning of new era for Great Lakes?” – even though the reporting included quotes from several researchers stating that future levels could go up or down. Likewise in 2008, a Chemical Society Report was titled “Declining Water Levels In The Great Lakes May Signal Global Warming.”

While today’s high levels are preoccupying Great Lakes states and more broken records in 2020 can’t be ruled out, it’s important to remember that the future is poised to deliver more surprises.

Impacts and Risks
Given the anticipated increase in future variability, what issues and risks are Great Lakes marinas facing? Current record-high water levels are already bringing challenges to light – from floating docks being lifted off mooring piles that are not tall enough, to lack of headroom under bridges. Breakwaters are also more frequently overtopped or are less effective at providing adequate calming at harbor entrances and mooring locations. Landside infrastructure is vulnerable as well; electrical gear must be elevated, water’s-edge buildings are subject to inundation, and parking lots are flooded. In many instances even a few inches of water over a walkway or path will render it inaccessible, especially for boaters with disabilities.

Continued high water levels will also drive increased erosion of bluffs and shorelines in the vicinity of marinas, bringing increased sediment to the littoral systems and likely more deposition of sediment in harbors and navigation channels. While draft issues are not immediately likely due to the high water, as lake levels recede again (potentially dramatically), that additional sediment may well be the source of future problems.

Emergent structures can become submerged by high water, or with such low freeboard that visibility becomes an issue, resulting in higher risk of accident and associated liability. Managing these risks is complex, and simply building higher is frequently impractical, since higher-profile breakwaters can appear like walls impeding views when levels fall again.

Whether on the Great Lakes or around the ocean coasts, marina operators are going to need to change their planning processes to account for a future that is distinctly different than the past. This is a difficult undertaking, one that will frequently require a substantial amount of stakeholder engagement. For municipally-owned facilities, there will be competition for planning resources and funds – competing needs in the here and now, as well as future needs for investment in other infrastructure, which all too often will be subject to climate change impacts. Private operators will have difficult decisions about the timing of future investments and how to pay for them.

Most of the revenue needed to pay for the industry’s response to changing water levels comes from boat owners who don’t necessarily operate on a 30-year lifecycle model. Instead they are making decisions based on their comfort level with current fees and proposed hikes. There is a risk that future-minded marinas that invest in a resilient future could lose out in the short-term, if those paying the dues are not informed of the reasons why increased investment is required.

The complexity of the systems involved will make implementing the necessary responses even more challenging. In the U.S., many municipally owned marinas are operated by private companies that may or may not operate on the same value basis. Furthermore, in many instances, marinas are themselves part of a larger network of marine and land-based infrastructure with local, state and federal interests intermingled.

For example, Monroe Harbor – one of the Chicago Park District’s premier facilities – is protected by the federally-owned offshore breakwaters that comprise the Chicago Harbor. As Lake Michigan water levels reach and potentially exceed record high levels in the coming months, the question of who has responsibility for providing adequate protection is distributed among a series of agencies and companies that have very different operational budgets and timescales. Without the necessary federal appropriations, the U.S. Army Corps of Engineers is prevented from keeping up with required maintenance and rehabilitation. This means the Park District and its private concessionaire that runs the marina must consider taking action to reduce the wave agitation within the harbor, following steps they have already taken to educate boaters about the increased hazards.

Responding to Future Conditions
What’s needed is a shift from reactive response to proactive planning and preparedness. This remains a consistent problem in the U.S., where recovery efforts after major weather disasters frequently run into the billions of dollars, but discussions about adaptation are often curtailed due to a perceived lack of affordability. At the core, this issue becomes one of change management and decision-making in an uncertain environment.

By necessity the recreational boating community is well-versed in checking the weather forecasts, anticipating turbulent conditions, and preparing appropriately. There will continue to be the need to prepare for traditional storms, but the future that is presently coming into view is one that will be unlike anything that has been experienced before. The entire marina industry will be required to plan and prepare for significant changes in their particular geography. The first step – always the hardest – will be moving away from a reliance on the recent past to inform the future.

Adapting to the future of the Great Lakes will require new thinking and approaches for marina design. Part two of this article will examine ways that Great Lakes marina owners and operators can prepare for the impacts and uncertainty of more variable and extreme conditions and build adaptive capacity into their facilities and infrastructure.

Mark Wagstaff is a senior waterfront engineer with SmithGroup. He can be contacted at 312-641-6624 or at mark.wagstaff@smithgroup.com.