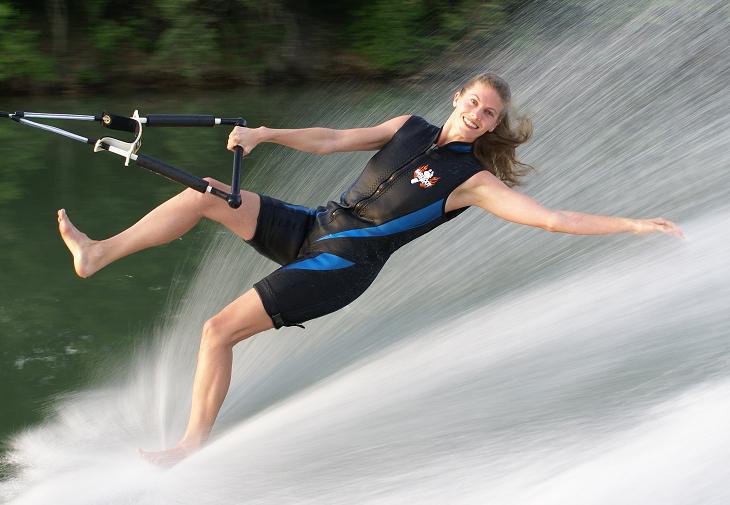 Lake Norman Marina in Sherrill’s Ford, North Carolina, is the site of a New Year’s Day tradition that attracts locals as well as people from around the country.

The marina is the sponsor of the annual New Year’s Day Barefoot Tournament. This year a woman took top honors for the first time in the history of the tournament.

Boat Club Manager John Gillette said the marina and the local ski club are in a win-win situation as partners in the tournament. The Carolina Show Ski Team organizes the event while the marina offers the location and Gillette helps with the publicity.

The tournament, which started in 1978, was the idea of local “barefooters” who wanted to introduce the sport to the area. Although barefoot skiing dates back to 1947, it wasn’t until the 1970s that it began to be recognized as a competitive sport.

Gillette grew up in Tampa Bay and liked water skiing. He got interested in barefooting after watching the ski teams at Cypress Gardens. “I wanted to do what they did,” he said.

In 1978, he qualified for the first world barefoot tournament, was team captain of the U.S. Elite Barefoot Water Ski Team in 1978 and 1980 and coached the 1982 team. He is credited with being the first American to execute a backward toehold deepwater start, according to the Florida Water Ski Federation. He is author of the book “Barefooting: John Gillettte’s Complete Guide to Barefoot Water Skiing.” He still barefoots. “But, I’m not quite as aggressive about it,” he said.

The tournament averages 25 to 30 participants each year. More than half the participants are from out-of-state. “It has come a long way from just a couple of guys skiing around the lake,” Gillette said. If the weather is good, like it was this year, there may be 200 spectators along the shore.

The marina has been involved with the tournament since 1990. Skiers use the marina’s heated dock area to suit up and then start right off the dock. Some skiers use their own boats, but the marina also provides boats for the event. Boats pull the skiers in a circular pattern around the cove near the marina, which allows for a good view from the shore.

Gillette said the key to making the tournament work is having the local ski team to organize the event. “It’s really pretty simple (for the marina),” he said. “It’s been a nice partnership. A win-win for everybody.”

The event is held while the marina is closed for the holidays, so it doesn’t interrupt the marina business and doesn’t require extra staffing. Some years Gillette has staff there to help on the docks or with the boats the marina has on display. He said some people have asked him why they don’t host the event in the summer, but it would be difficult to accommodate the tournament with the regular boating traffic and customers at the marina.

Over the years Gillette has competed in the tournament and driven boats for skiers. He also uses the event as an opportunity to share with the audience what the marina offers.

As part of the marina’s sponsorship, Gillette assists with the event publicity. “We want to get our name out there the best we can,” he said. “I’ve been writing the releases for 30 years and over time more and more people are aware of it.”

He uses local and national media to spread the word about the event. He sends out one release about a month in advance, followed by a reminder (especially to the local media) a few days before, and then follows up after the event with the tournament results. The publicity helps create awareness about the tournament and the marina.

“It’s a fun, family-friendly activity,” he said. “It brings a crowd here, and it brings people here that have never been to our marina,” Gillette said.