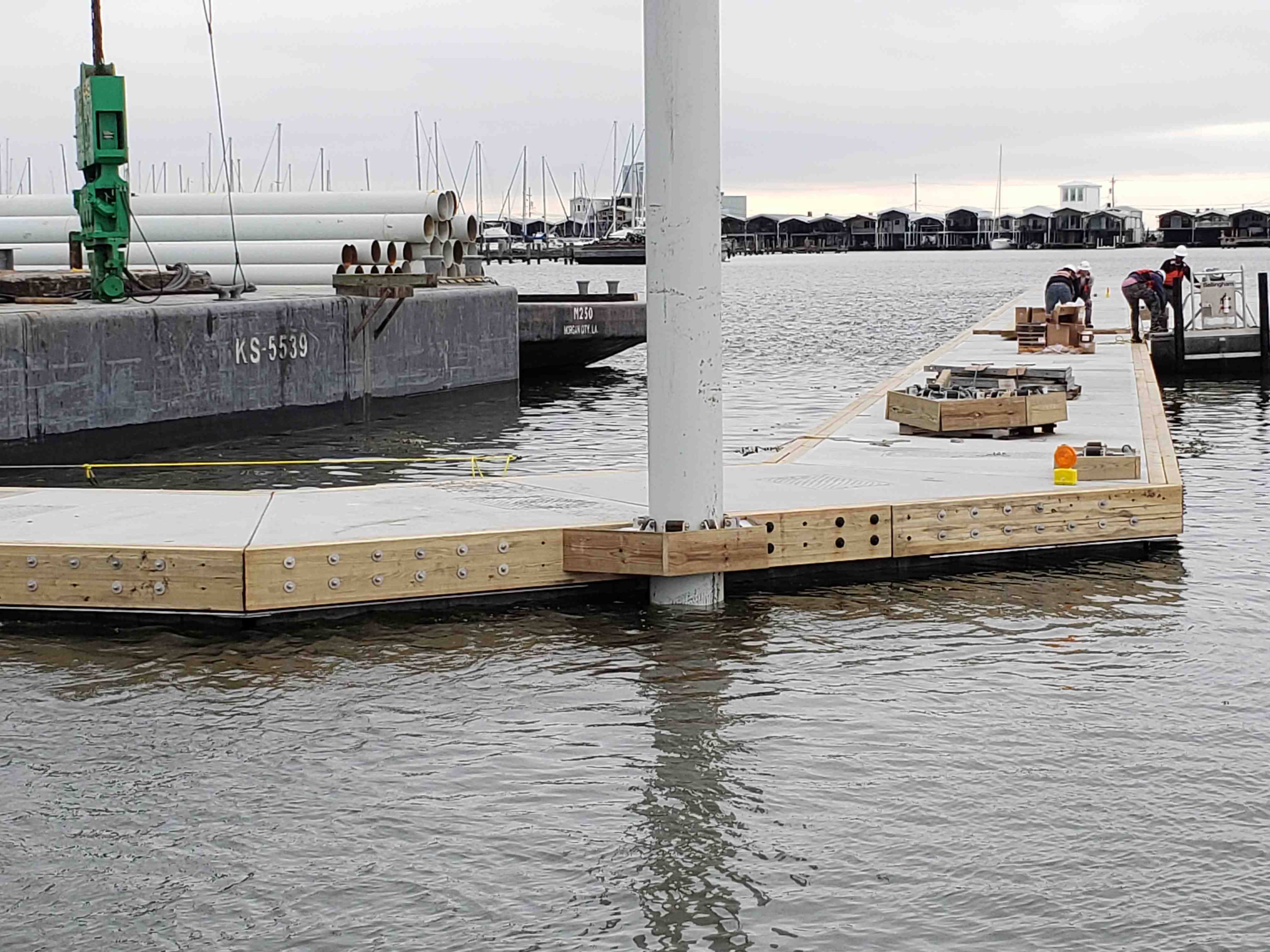 The rebuilding of New Orleans Municipal Yacht Harbor should be nearly complete by the end of 2019. The reconstruction has been a long time coming.

The marina was built between 1938 and 1940, a Work Progress Administration (WPA) project intended to get people back to work during the Great Depression. Updated in the early 1980s, the marina was in demand for sailboats, which filled many of its 600 slips.

In 2005, Hurricane Katrina destroyed about three-quarters of those slips. A second hit from Hurricane Isaac in 2012 took out 20 more, leaving just 130 slips with no water or electricity on the marina’s west side. Negotiations with FEMA for money to repair or replace the marina dragged on for many years, in part because so much of New Orleans’ infrastructure had been damaged by the hurricanes. Finally, in 2016, the City of New Orleans got the approval to proceed on a total renovation.

The $22 million reconstruction project includes a complete new concrete floating dock system and floating wave attenuator, which are being built by Bellingham Marine. The engineer for the project is Moffat & Nichol, and the general contractor is TKTMJ Inc.

Work started on the marina’s east side, which had been unoccupied since Katrina. The New Orleans Municipal Yacht Harbor Management Corporation (MYHMC), which operates the marina, had to track down the owners of several abandoned boats – some sunken and some still floating – before TKTMJ could remove them and begin demolition of the old slips and concrete piers last June. (This work took place while New Orleans Yacht Club and Southern Yacht Club, located close by, were holding children’s summer sailing camps.)

Magnolia Dredge & Dock, LLC dredged about 13,000 cubic yards from the east side of the harbor, beginning work in late October 2018 and finishing up in early January. The entry to the harbor and the marina is down to a minus 10 feet.

The concrete floating dock system replaced a fixed dock system. “We started building the docks in October and delivered them to the site between late December and mid-February,” said Bryce Fisher, manager of project development at Bellingham Marine.

For now, there will be three main docks on this east side, with a total of 166 slips. TKTMJ should complete the installation work by late March, although the slips will not have electricity or water until work on the west side of the marina is complete. If funding permits, MYHMC hopes to add an additional 84 slips on the east side at some later time, bringing the total there to 250 slips.

At the end of March, the boats that have been in the west side of the marina will be moved to the east side so that work can start on phase two. The west side reconstruction will include the installation of 191 slips from Bellingham. (Fourteen more slips could be added at a later date.) That work should be completed sometime this fall.

Several of the marina’s new slips will be larger to accommodate today’s wider beam boats. All slips will provide updated utilities, lighting and life safety equipment.