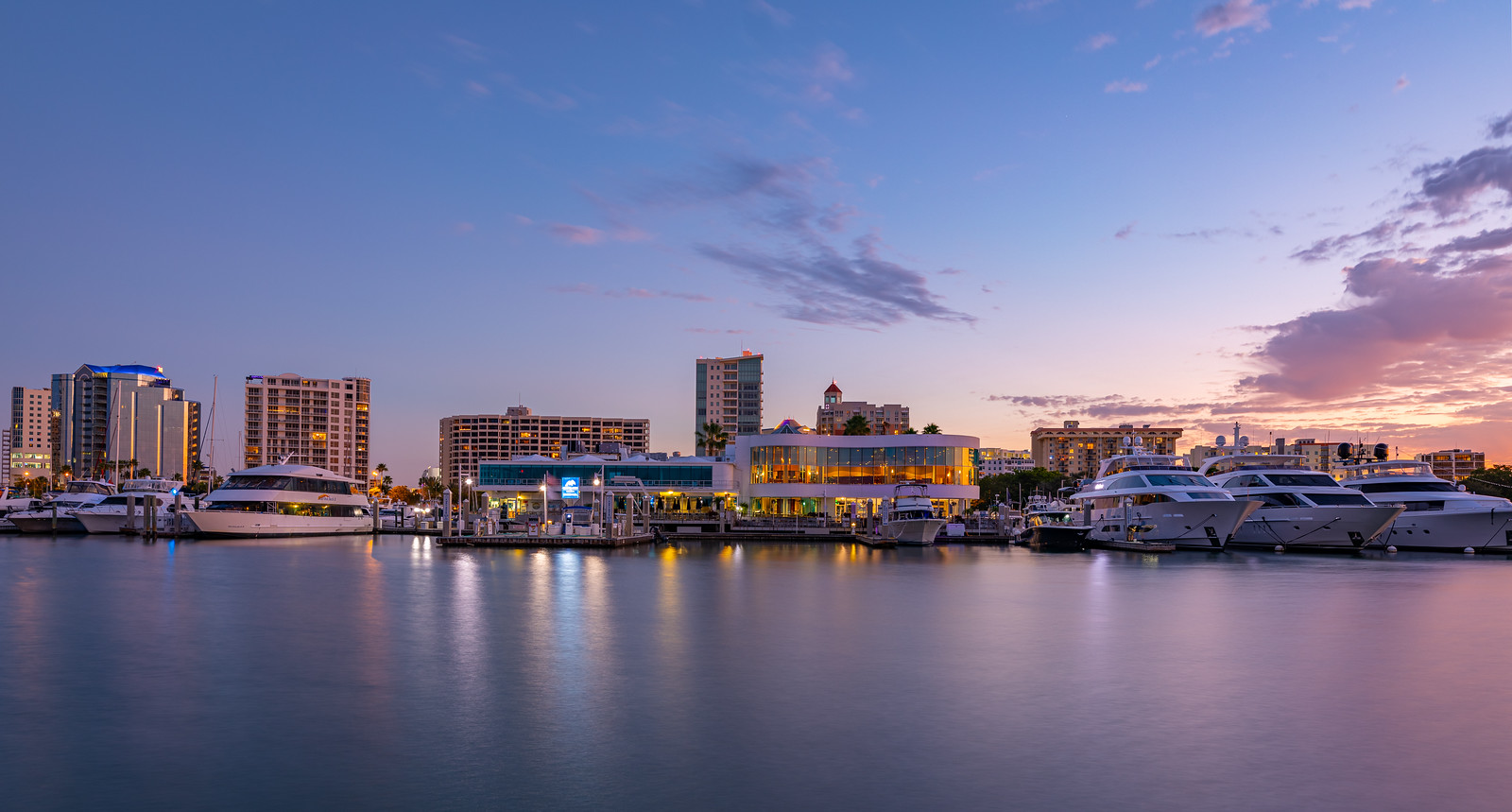 There was a time when marinas were mostly privately owned and operated entities where the CEO and head dockmaster were one in the same. Times have changed and with the business of a marina becoming more complex—housing more profit centers, following a greater number of regulations, and catering to the hospitality whims of today’s boaters–the operations have had to keep pace. Marina Jack Yacht Basin, formerly known for its restaurant Marina Jack’s, with slips being secondary, has completely revamped and now works as a public/private partnership that has been so successful Marina Dock Age awarded the facility the 2020 Business Operations Award.

The property on which the marina sits has always been owned by the City of Sarasota as a key spot on its waterfront. In 1965, a private operator was contracted to open and run Marina Jack Yacht Basin as a restaurant that catered to boating customers with designated day docks. The property remained as such until the early 2000’s when another private operator came on board and invested heavily in capital improvements to turn the restaurant into more of the marina it is today. Expanded floating docks, upland amenities, and more services that boaters seek were added and slowly the property started to become better known as a popular marina and not just a restaurant.

In 2016, Suntex took over as the private operator working through a public/private partnership with the City of Sarasota. Since that time, Suntex has focused on taking the amenities to the next level adding new access control systems, reinvesting in slips to add boat lifts, and reconfiguring layouts to better meet the needs of today’s boater. A concierge service was added along with a boat club and boat rental operations, a brokerage, on-site retail spaces, moorings, and a laundry area. A big draw and highlight is the 24-hour fueling facility—the only one of its kind on the Gulf Coast.

Having options ranging from boatlifts to large slips to moorings has enabled the marina to capture a wide variety of boaters from jet-skis to megayachts. “We can accommodate the needs of all boaters from megayacht owners and crews to beginner boating families to sailors traveling the world,” said Kathryn Ross, general manager of Marina Jack Yacht Basin.

With such a variety of boaters, it is challenging to accommodate all the service needs. Marina Jack Yacht Basin relies on a team of about eleven 3rd party contractors to cover anything a boater needs. The marina vets all new contractors so it can confidently provide those names to their boating customers. “We will give anyone who’s interested a try and if they will be an asset, we’ll sign them up to our team. It’s nice to have a team that primarily works out of this marina. They’re our first call if a customer needs something. It’s nice to have a good partnership in that way,” Ross said.

The public/private operation enables the marina to share some of the operational expenses with the City and, in turn, the City receives a percentage of the gross profits, including a 50/50 split of the expenses and revenues for the moorings. “The City is the landlord and we represent them the best we can along with representing Suntex well as our corporate owner,” Ross said.

A prime example of the public/private partnership is the pumpout boat, affectionately known as the “Brown Eyed Girl.” The city owns the boat and Marina Jack Yacht Basin stores and maintains it. With the City’s involvement the boat has been able to offer the pumpout service for free. The program has been revolutionary in eliminating waste from Sarasota Bay at a rate of 10,000 gallons of raw sewage properly disposed of each year.

Setting Operational Goals
Suntex corporate offices work hard to ensure the marina meets daily, monthly, and seasonal goals and keeps close tabs on the operations. They work with the onsite management team to establish annual SMART goals to guide the health and success of the marina and all its revenue streams. To help managers better understand how the full-time employees approach problems and challenges, all management and staff take personality exams remitted by the corporate office. Ross says this helps to build a better understanding of how everyone operates best in their jobs.

Looking ahead, the marina is planning to start retrofitting some of its older concrete docks into boatlifts, and alter the existing footprint of the marina to allow for slips that can accommodate a rising number of catamarans. “With the floating docks installed in the early 2000’s, we’re going to begin tweaking those because they are starting to need more maintenance to ensure the integrity of the docks,” Ross said.

With a unique combination of slips, a wealth of amenities, and a loyal following, Marina Jack has become a true landmark for the City of Sarasota.