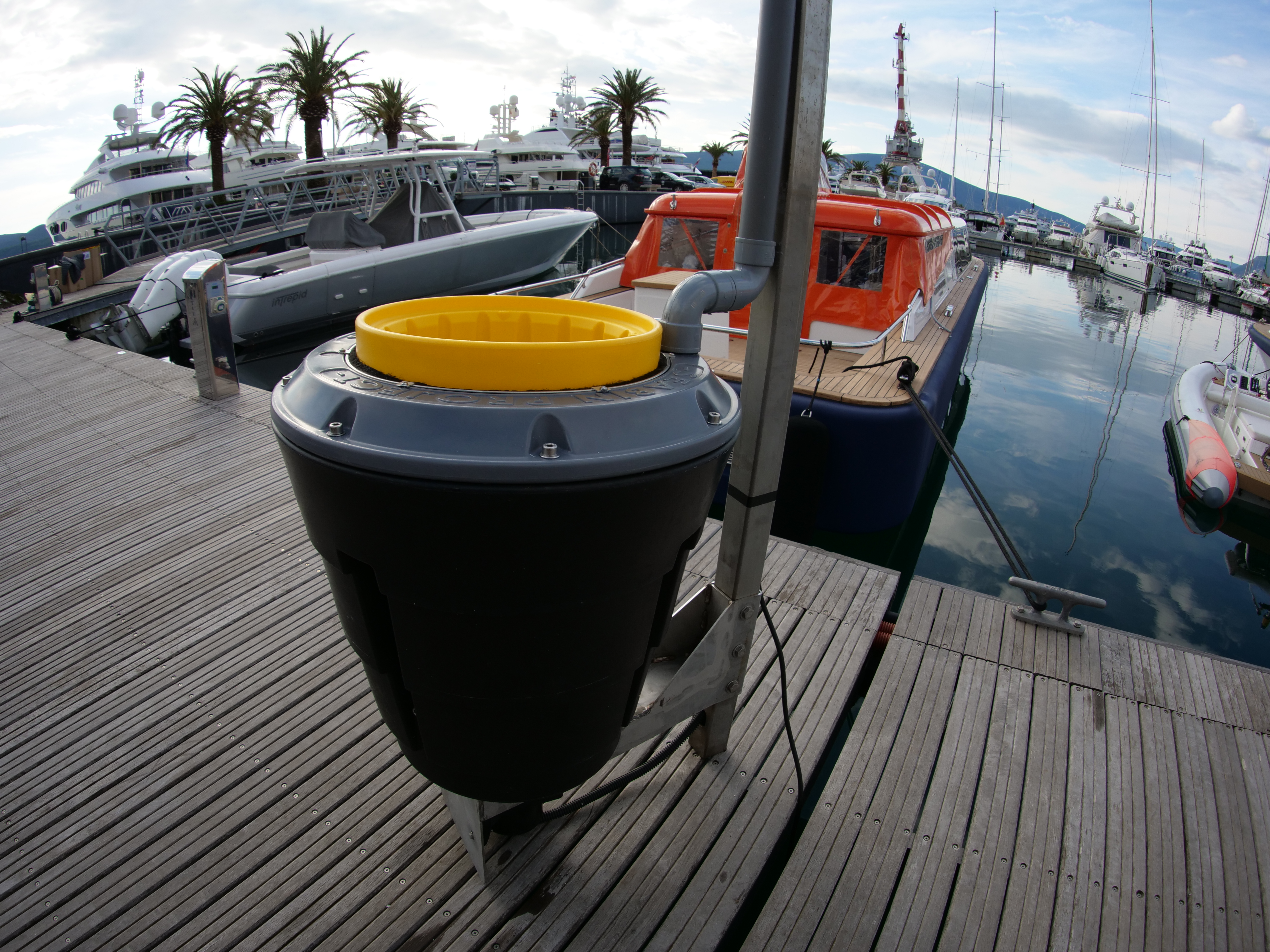 With garbage cans on land to help control litter, why not have trash collectors in the water to catch the trash that pollutes the waterways?

Two boat builders and water enthusiasts answered that question with the creation of the Seabin, a floating garbage bin that collects water-borne plastics and trash 24 hours a day.

Andrew Turton and Pete Ceglinski teamed up to create the Australian company Seabin Pty Ltd in 2015. A Seabin Project video went viral on social media and a crowd funding campaign in January 2016 raised $267,000 for the project. Later that year, the company began installing the Seabin in pilot locations. Seabin pre-sales launched in 2017, and 860 units have now been installed around the world.

The company strives “to help solve, educate and prevent our oceans’ pollution problems.”

Beyond the creation of the Seabin collector, the company’s scope has expanded to include research, technology and an education initiative through the Seabin Foundation.

The Seabin Project website (www.seabinproject.com) states one of its goals is “to provide practical and tangible solutions to reduce the plastics in our oceans which is one of the world’s greatest environmental problems.”
Seabin in the U.S.

Safe Harbor Marinas learned about the Seabin Project through social media. “We were impressed with their messaging and passion to clean up our oceans,” said Kate Pearson, vice president of business development for Safe Harbor Marinas west division.

Safe Harbor was the first pilot partner in the U.S. to install a Seabin. Pearson said Safe Harbor was interested in Seabin’s innovation and dedication. “It’s more than just a trash collector; it’s a movement and their ethics align with ours,” Pearson said.

The first Seabin was installed in the U.S. in March 2018 at Safe Harbor Carbillo Isle in San Diego. Safe Harbor has now installed collectors in 15 locations and plans to add more where appropriate.

The Seabin is designed to be installed in marinas, yacht clubs, ports and any body of water with a calm environment and services available. It is not suitable for installation in open water where boat traffic and large currents or waves would have an adverse effect on the performance.
Safe Harbor installed the collectors in areas where there is inadequate natural flushing in man-made harbors and lakes.

Pearson described Seabin as a game-changer for Safe Harbor marinas. “The water quality improves immediately, and our boaters just love it. The boaters on the dock where the Seabins are located have ‘adopted’ the unit and check on its progress when they are at the marina. The good will and support that we get for installing the units is a wonderful added bonus,” Pearson said.

How it Works
The Seabin is installed on a floating dock so that it moves up and down with the tide level while collecting floating rubbish. With a submersible water pump plugged directly into a 110/22V outlet, water is sucked in from the surface and passes through a catch bag inside the Seabin. The water is then pumped back into the marina leaving litter and debris trapped in the catch bag to be disposed of properly. Due to the suction of the water, even items too large for the catch bag stay in place next to the collector and can be scooped up by hand or with a net.

“The installation is very simple – screw it into the dock and attach it to power. Pete Ceglinski, one of the Seabin founders, taught us how to install and trained our staff,” Pearson said. “The maintenance is also simple – it needs a gentle brushing to remove growth, and Seabin is now partnering with Prop Speed to coat the collectors with a non-toxic antifouling product.”

The catch bag can capture trash as small as 2 milometers and can hold about 20 kilograms (44 pounds). The bag should be checked twice a day and emptied as needed. According the 2018 Seabin data, each unit catches an average of 3.9 kilograms per day (8.59 pounds), depending on the weather and debris volume. Over the course of the year, each unit could collect 1.4 tons of litter.

It is estimated 8.1 million tons of waste enters the oceans each year. According to the Seabin website, the 860 Seabins installed around the world have collected 288,968 kilograms (637,000+ pounds) of debris. An oil-absorbent pad can be added to absorb petroleum-based surface oils and detergent. The debris collected in the Seabin can be discarded or recycled, according to the marina’s waste management policy and local waste collection regulations.

Seabin recommends cleaning the collector once a month and additional periodic maintenance may be needed. The unit runs 24/7 and costs less than $3 a day to operate. Seabin estimates 2 to 6 units could be used in a medium size marina, depending on water conditions and the number of point sources or river outlets. The estimated cost for each unit is $4,000 (US). The website provides a request form for estimates on purchasing and installation of the bins.

Water Products & Solutions (WPS) is an official supplier of the Seabin in the Americas. Gautier Peers, WPS sales and business development, said there are 40 Seabins installed in the U.S., and his goal is to increase that number to 300 by the end of 2021. He wants to see more U.S. companies involved, as well as local governments that operate public marinas. He also encourages marinas to enlist the support of private donors to help cover the installation cost.
Education

Seabin recognizes that it takes more than technology to address the pollution problem. Education is the solution. Since 2015 the company has operated under a business model with 50 percent for profit and 50 percent for non-profit activity.

The Seabin Foundation offers STEM (science, technology, engineering and math) learning programs for youth that include lessons on reducing plastics consumption, recycling, data collection and activities on how to design and build new technologies. The education programs provide intensive hands-on activities demonstrating the issues concerning waste in the oceans and what we can do about it.

“We not only want to prevent the trash from entering the oceans; we want to invite and teach kids about what is in our water,” Peers said. “We are not in competition with others; we should all be fighting marine pollution.”

Peers said inviting local officials, marina operators and school groups to Seabin demonstrations helps raise awareness about marine pollution. “By inviting locals to demonstrations to see how much trash Seabin can collect, it’s an opportunity to also show people what ends up in the waterways,” he said.

“The only way to solve the problem is to raise awareness. If you don’t raise awareness as an industry, how can we expect other people to do something?”
Safe Harbor also incorporates education into their operations. “We have had a lot of fun with the educational programs, for both our boaters and with the local Girl Scout troops,” Pearson said. “Overall, Safe Harbor Marina’s properties are managed at the highest level of best management environmental practices. Specifically, we do a lot of boater education and outreach while working with groups like Seabin to reach the general public on pollution sources.”

Seaside Sustainability, a non-profit organization based in Gloucester, Massachusetts, has partnered with Seabin to become a Seabin dealer on the East Coast. The organization’s mission is “passionately creating sustainable oceans and communities by educating through action.”

“Our work in our oceans has informed us to work on the vast marine debris issue, and we tackle it in the several ways: education, science, legislation, blue technology, and business partners,” said Eric Magers, executive director. “The Seabin provides our organization a great tool to link many parts of our organization.”