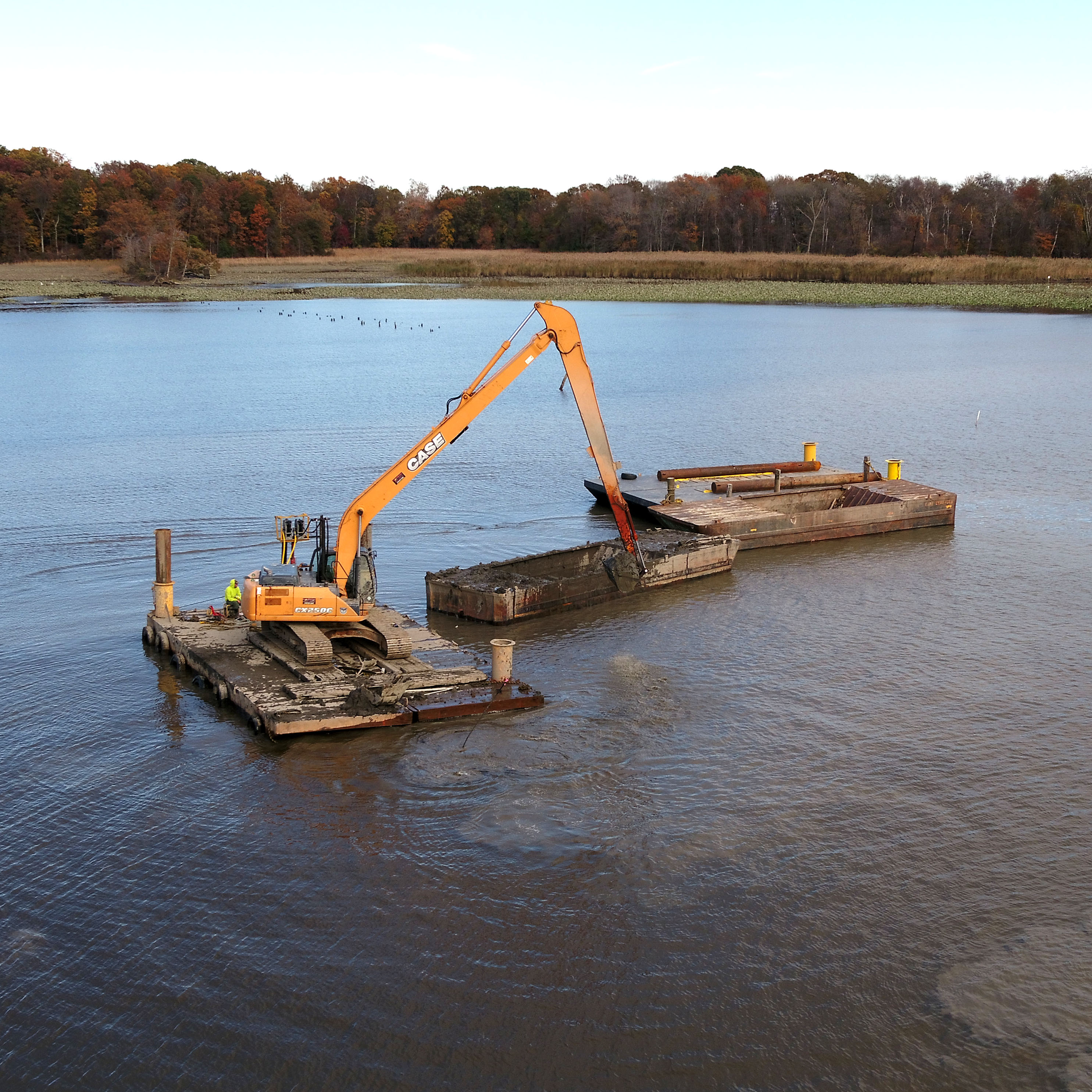 When shoaling along Neabsco Creek stopped boating traffic, marinas found help from the county and state government. The group formed an LLC to receive funding and oversee a dredging project, which began in November 2018.

Neabsco Creek in Woodbridge, Virginia, is just south of Washington, D.C., and home to four marinas with approximately 1,000 boating customers. In most years the area is bustling with boaters, but last March activity came to a halt after the U.S. Coast Guard came into the creek to measure the depth and declared the area too shallow to safely navigate. Two navigational buoys at the mouth of the creek were removed and diamond-shaped white signs that said “Danger-Shoal” were left behind.

It wasn’t just local boaters that were impacted. The marinas do repairs for boats from other regions, and there are twelve other businesses that support the boating industry, which rely on the creek being navigable. About 50 jobs are dependent on the waterway being open to boaters. In addition, the Woodbridge Fire & Rescue Department keeps its boat on the Neabsco Creek and responds to emergencies in nearby Fairfax and Suffolk Counties as well as areas in bordering Maryland. Without open navigation channels emergency response capabilities were severely limited.

Seemingly left with no options, the marinas, along with local and state officials and politicians banded together in a public-private partnership to come up with a solution to get Neabsco Creek dredged and boaters back out on the water.

Increased Shoaling
While the waterway is under federal control and therefore should be federally maintained, there was no money put into the U.S. Army Corps of Engineers budget for dredging the creek. The Corps did the last dredging in 1999.

Michael Hart, owner of EZ Cruz Marina, said the situation on the creek has been getting worse due to upland development. EZ Cruz, built by Hart’s family in 1971, is a full-service, 170-slip facility with a 24-hour fuel dock. With such a long history in the area, Hart is familiar with the issues and problems on the creek. He said the need for dredging arises from all the upland runoff debris that comes down to the creeks and rivers and settles there.

“A lot of developments are older, ‘60s era, and didn’t have obligations and practices for stormwater ponds that leave the sediment behind,” Hart said.
Hart said all the marinas were aware of the shoaling but were taken by surprise when the Coast Guard just removed the channel markers and claimed the area dangerous for boating.

The marinas knew they had to get the message out about what was happening and attended several county board of supervisor and community meetings to talk about the number of businesses and jobs impacted and the negative effects to cash flow and taxes for the county.

“We talked with local constituents and tried to get congressmen involved who could direct us. Principi played a major role,” Hart said.

Government Steps Up
One of the leaders of the effort for dredging was Prince William County Supervisor Frank Principi, D-Woodbridge. “My role was to help frame the problem or tell our story, offer a solution, and persuade others to join in,” Principi said.

The county held a series of three open meetings and held two regular county supervisor meetings with citizen time to gain public input into the dredging issue. In addition, the county did outreach via direct newsletters and email to area boaters and relied on television, radio and newspaper stories to get the message out.

“In short order, we determined a public-private partnership was needed to raise the funds, obtain the permits, and operationalize the dredging plan. We lined up the county board of supervisors, house and senate members, the Industrial Development Agency, state legislators, and formed a new LLC to receive funds, oversee dredging, and ensure transparency.”

A new LLC was formed with a board comprised of representatives from each of the four marinas, Hampton’s Landing, EZ Cruz, Pilot House and Neabsco Marina, and from four local civic organizations. The formation of the LLC enabled the group to chase down grants and oversee the contracting for and operation of the dredging project.

Funding came from three main places. A one-time appropriation from the general revenue fund of the county was made in the amount of $750,000.
“The county really stepped up and provided the lion share of the funding, legal support and the equipment needed to dewater the dredged material at the landfill,” Principi said.

The state, which previously had zero dollars set aside for dredging small creeks, was persuaded by the Prince William legislators, area boaters and businesses, to do a budget amendment to authorize $2.6 million over the next two fiscal years for small creek dredging projects. The grant is administered under the Virginia State Ports Authority. Prince William County obtained $250,000 under the first year. The final funding of about $250,000 came from the four marinas.

With these funds alone, the main channel would be dredged to five feet, which was a foot shy of the mark required by the Coast Guard for them to return to place channel markers. The marinas had purchased markers intending to put them in themselves.

However, the project got a boost on January 29, when the Virginia Port Authority voted to approve $250,000 in additional funding to the dredging project. The extra money is enough to dredge the channel to six feet. All parties anticipate the Coast Guard will resume placement and maintenance of the navigational markers. The marinas have also been able to use a bit of leftover money from the county, as well as their own funds, to dredge their fairways.

Waterway Engineering out of Virginia Beach conducted the project surveys and is managing the overall project and Lake Services of Virginia is doing the dredging. Dredging was finished by mid-February to meet with state guidelines for avoiding work during fish spawning season. The contractor worked six days a week to finish the work in that time frame.

The Future
“What happened in Prince William is happening all over Virginia and the country. The Army Corps of Engineers and Coast Guard made it clear that there is no federal funding for smaller waterways and we are prepared to continue to step up to the plate,” Principi said.

Because of the lack of federal funds the county and businesses intend to keep the same public-private partnership model for future dredging needs, which they anticipate will be required every five years. Those involved hope the state will continue to see the value of dredging for boater safety, economic development, jobs and watershed protection and so continue to provide funding. The LLC will stay in place and the model they used for public outreach will be used again if needed to advocate for continued appropriation of dredging funds.

“We’ll leave the LLC in place. The siltation issue will not go away. We hope the Coast Guard and Corps come back to take over their role. It’s still mandated they maintain it but they are not,” Hart said.

Hart continued that down the road he feels the stormwater management fees collected by the county should be allocated to projects like this. While he said the county and state came through on this issue this time, he’s wary of the future.

“I have talked to other senators and people and they know PWC (Prince William County) stormwater isn’t up to speed compared to other areas. Millions of gallons of runoff comes through and PWC is behind the times with that. It shows. This is a public area, with ramps, fuel, and we have to keep it open,” Hart said.