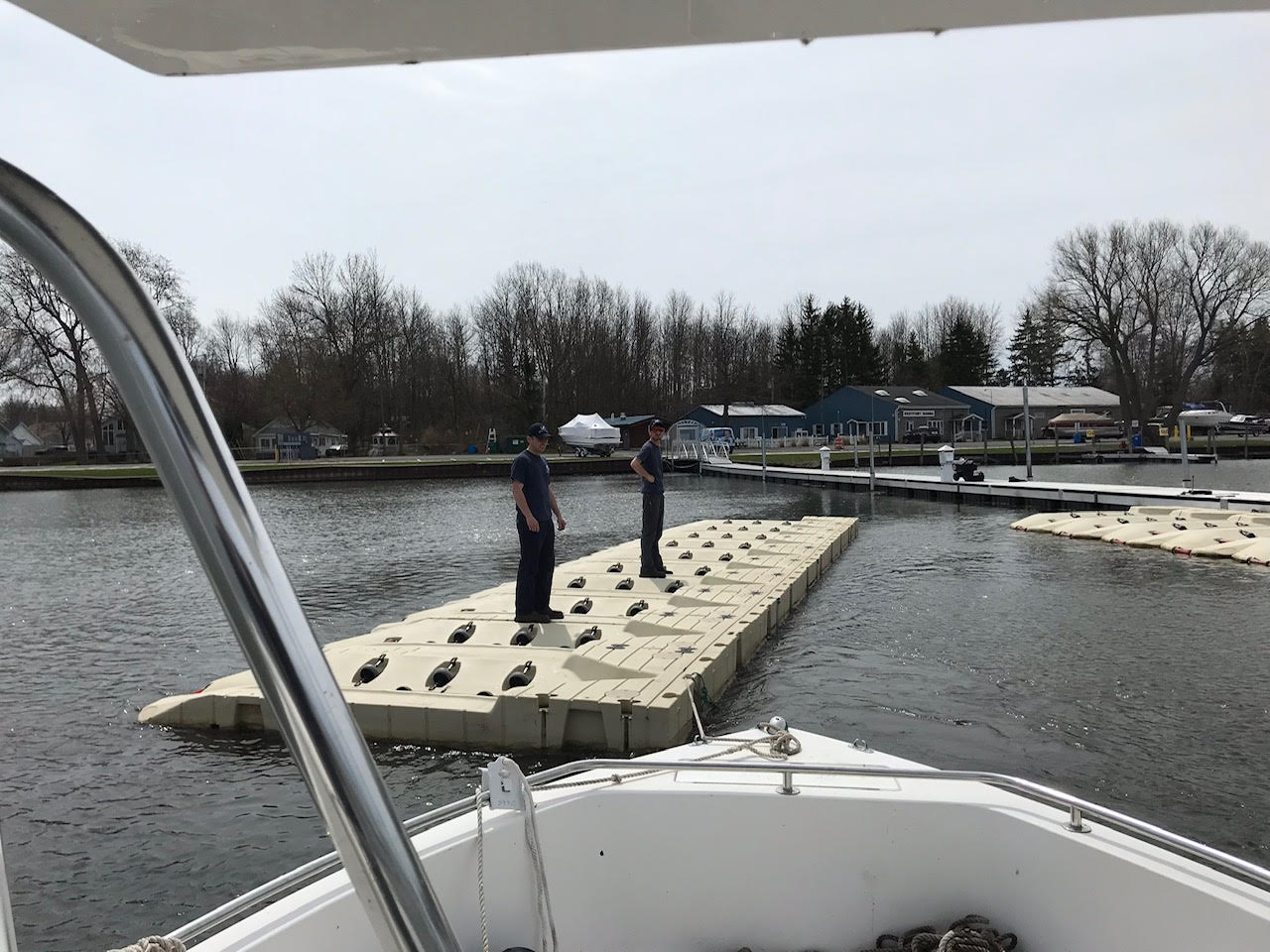 For marinas in northern climates, freezing temperatures and ice can cause more damage than the day-to-day boat traffic and the occasional boater hitting the dock during the summer. Wade Braman starts the winterization process after his two marinas close for the season on October 15 with the goal of being finished by November 15 in case there is an early freeze.
“Surprisingly it takes longer than you would think,” he said. “It takes about three weeks to get the marina absolutely ready for winter.”

Following a Checklist
Braman is the director of marina operations at Southpoint Marina & Pool Club in Penfield, New York, and Westpoint Marina & Harbor in Greece, New York, both located on Lake Ontario.

One of the first items on Braman’s checklist is winterizing the flags and markers along the channel they are responsible for maintaining. The flags are removed and brought in for the winter, and they place a magnet on the lights so they don’t waste battery power.

To reduce the chance of frozen water lines, Braman uses a large air compressor to blow out all the water lines to the docks, the outdoor restrooms, and the marina buildings. Before the season ends, they try to sell as much fuel as possible, leaving about 400 gallons in the 4,000-gallon tanks to start the next season.

He turns off the breakers for the electricity at the docks and the routers for the Internet access, but leaves the security system and cameras operating over the winter. Braman contracts with other companies to winterize members’ boats and the pool at Southport. Once the boats are winterized and shrink-wrapped they are stored in the marina parking lots.

Throughout the winter, Braman walks through each marina weekly making sure the docks are secure, the security systems are still operating, and that there are not burst pipes or leaks in the buildings. Braman said the marina locations protect the docks from strong winds, but ice is a concern. Moving sheets of ice can cause major damage to the docks and floats.

“We check every single bolt, hinge, piling and guide to make sure everything is secure,” Braman said. “We want to make the marina as strong as possible. Everything has got to be tight. We can’t have anything that is kind of rigged.” He remembers coming to check on the marina one day several years ago and two finger docks had floated off, which were later retrieved.

The changing water levels on the lake creates challenges as well. Since Plan 2014 went into effect in 2017, Braman said they are seeing higher high-water levels in the summer and lower low-levels in the winter. Plan 2014 issued by the International Joint Commission is an agreement between the United States and Canada to regulate the water levels and flow in Lake Ontario and the St. Lawrence River.

Braman said one year their docks dropped to such low levels over the winter that the wiring was pulled loose from the security cameras. They had to rewire the system to allow for extra line when the water levels fall.

Planning for Ice
Braman’s marinas usually start seeing freezing temperatures in December and the lake can stay frozen for two months. “Frozen solid is okay, but problems occur when a sudden warm spell hits,” he said. “A gradual thawing is better.”
Some areas of the Great Lakes start freezing in late December and early January and reach a peak by the end of February or the first of March. Since the 1970s, the long-term average for the Great Lakes is 55 percent coverage, with some areas freezing over more consistently than others. The lowest coverage recorded was 9.5 percent in 2002. Lake Michigan and Lake Ontario resist freezing more than the other lakes due to their lower latitudes and deeper, warmer waters.

Moving ice during sudden thaws can be a danger as well. The smaller blocks of ice that break off near the shoreline can be pushed by as much as 100 tons of pressure from the larger and thicker ice further away from the shore. “It’s usually moving ice that causes damage to the docks themselves,” said Greg Weykamp of Edgewater Resources, a company that provides coastal, marina and waterfront planning and design services.

An ice suppression system installed at the docks can help minimize damage from ice. The system moves the water around which prevents it from freezing. Weykamp said the ice suppression equipment itself is not that expensive to buy and install, but it does take a lot of electricity over the course of the winter to keep it running.

In some areas it may get so cold that the ice is two or three feet thick. “There is a point where no ice suppression system can keep up with it,” said Weykamp.

Some marina operators may pull their docks from the water during the winter, but Weykamp doesn’t suggest doing that long-term. “There is potential to damage the docks and it creates a lot of unnecessary wear and tear,” he said. The electrical systems can also be damaged when moving the docks and disconnecting and reconnecting the wiring.

The key is to minimize risk to the marina facilities. Some of Weykamp’s recommendations include:
• installing a dock system that allows the docks to move with the fluctuating water levels,
• designing the utility system so the lines are easy to blow out, and
• maintaining some type of heating system in the buildings to keep water lines from freezing.
Weykamp said good design of the marina docks and utility systems can alleviate some of the problems experienced in areas with extreme cold weather. “You plan for it and anticipate it.”