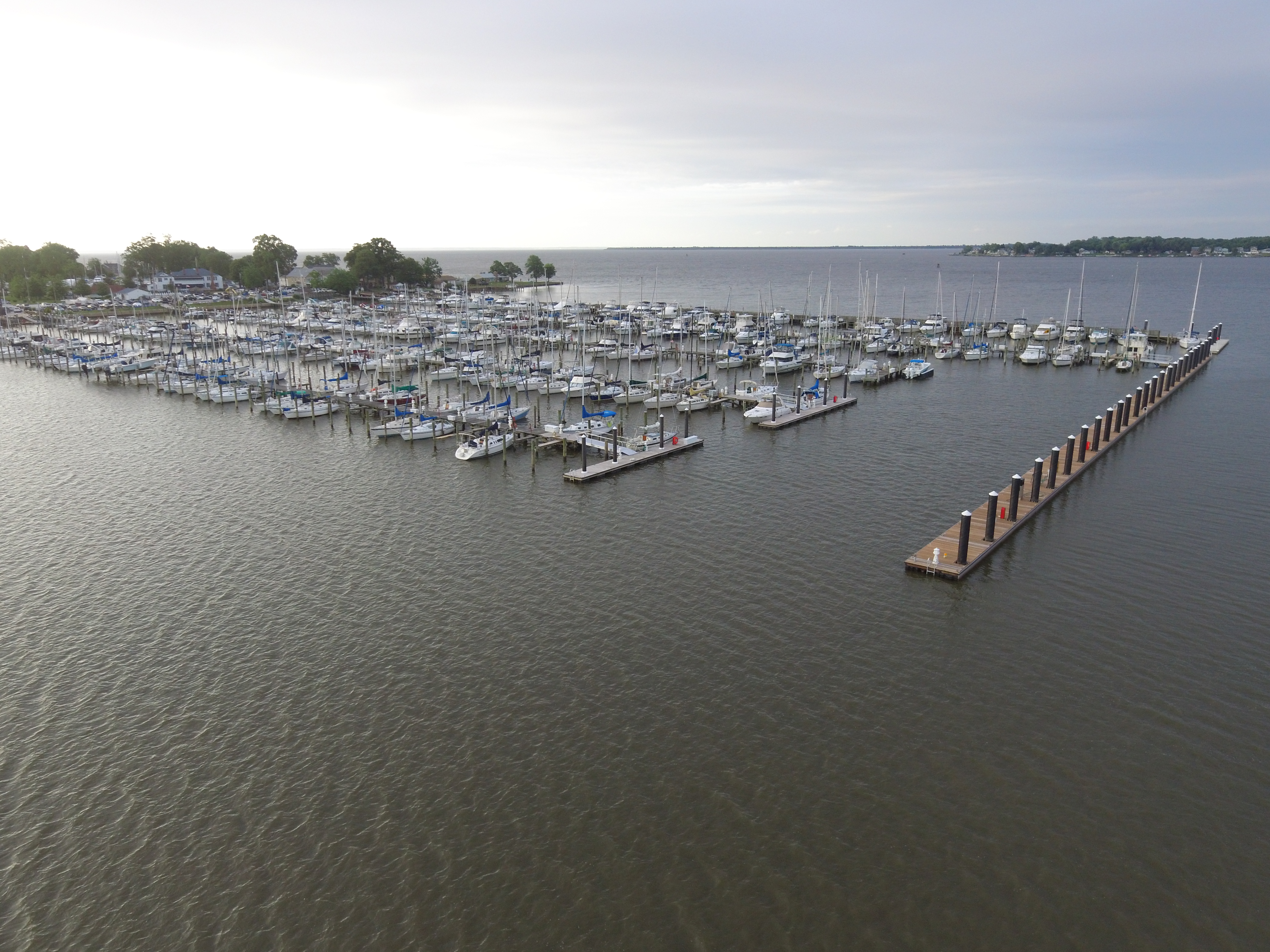 Since the early 1980s, Bowleys Marina in Middle River, Maryland, has been a member-owned “dockominium” facility (boaters own individual slips, rather than rent them). A board of directors also guides marina investment and long-term decisions. The marina was long due for renovations, and in 2019, it completed a major $3.2 million upgrade of the docks, with a new wave attenuator and fuel dock.

“There’s no easy way to explain Bowleys,” said Ed Harwood, general manager of the marina. Most, Harwood said, refer to it as a condo marina. He calls it a hybrid facility, somewhere between a co-op and a condo marina.

The marina houses about 500 slips with about 490 members. Of the memberships, 380 are slip owners, and the marina leases about 120 non-owned slips. Some boat owner members also lease out their slips. About 190 owners occupy their slips, and about 190 owners lease out their slips to other boaters. With a combination of slip owners, marina slipholders and slip owner lessees, the hybrid membership doesn’t make decisions quickly, but it makes them judiciously. In 1993, Coastal Properties Management came on-board to operate the facility. Although the marina is not-for-profit, the vast ownership needed the experience and unification of a management firm to help understand the business day to day and help plan for the long term.

Coastal Properties Management is a combination consulting and marina management group, said Bruce Wagner, president. Over the last 40 years, the company has managed more than 60 marinas in the Mid-Atlantic from Maryland to the Carolinas. The company has worked on new development projects and marina renovations. In addition to private owners, Coastal has worked with a variety of municipal groups, the state of Maryland and the National Park Service.

The company has owned marinas in the past, and is a licensed real estate broker, representing marina owners and buyers, but it does not currently own any facilities. Coastal manages 11 properties in Maryland, Washington, D.C. and Virginia.

Local Market
The Chesapeake Bay is a popular boating destination. “Being an estuary of that size, it provides a lot of protection for boaters,” Wagner said. The area is seeing an increase in larger center console vessels, popular in its fishing and cruising regions. In general, the area attracts a broad variety of powerboaters and sailors, Wagner said.

In the northern, Middle River area of the bay, boaters have access to the upper and middle bay, endless cruising grounds and lots of local destinations. “You could cruise for many years in that area and still not see everything,” Wagner said. He said the boater demographic is similar to other East Coast/Mid-Atlantic regions, which are seeing older boaters in large cruisers and younger boaters coming into the industry with smaller boats.

Harwood said the marina has seen a trend back toward a need for smaller slips, which it will consider in future renovations. He describes the marina as a generational family facility. Many members have been there since the start. Boaters are a mix of day cruisers and those who use the boat as a weekend getaway and stay at the dock. Harwood said about a decade ago, there was also an influx of smaller boats from customers who stayed on their large vessels at the dock and cruised locally with a smaller boat.

Bowleys had done some renovations in the 90s, but most of the facility was overdue for updates. Not only was the infrastructure aging, but it needed to change to meet the needs of current boaters.

Boater demographics were changing, and the area around the marina was changing too. Larry Markle, a Bowleys boater and president of the Bowleys member board of directors, said he has seen a lot of consolidation on the river. He’s been a boater at Bowleys since it opened as a member-owned facility in 1981. “Some marinas are being closed down or converted to other purposes,” Markle said. Those remaining are serving a different class of boaters and stepping up services to meet that need.

Coastal Properties manages the facility at the direction of the board of directors. The 10-person board is made of owners, who are elected to three-year terms. A group of directors are replaced each year, and all the directors elect board leadership positions annually in the spring. Markle said the board likes to have members that bring unique skill sets to the group, such as those with backgrounds in finance, construction, personnel management, technology and operations. The board meets monthly, and individual committees meet separately and report to the full group. Annually, the board hosts two meetings for all owners. At the end of the year, they present the budget for the following year, and a meeting in the spring looks more in-depth at financials, upcoming investments and the prior year’s performance.

With so many owners, it can slow down the decision-making process, but

regular communication at meetings and via newsletters and announcements helps facilitate the process. On-site management from Coastal Properties is also important for communicating to owners and relaying owners’ ideas and requests to the board.

Renovation
It was a long road for Bowleys to reach phase one of its renovation project. The planning process started about six years prior to completing the project in August 2019. Planning included a complete financial study on the facility, docking systems and available manufacturers. Members also spent time visiting and talking with other marinas. Eventually, an engineering firm prepared an RFP, and the marina solicited bids from five companies located in the Chesapeake Bay area. A big limiting factor in choosing a contractor was finding one with the proper equipment for the job. The piling for the new wave attenuator were 85-foot long, 24-inch diameter steel piles that needed to be driven in 60 feet. The marina chose Marine Technologies based in Baltimore as the general contractor, who contracted with Meeco Sullivan and Marintek for the wave attenuator and docks, respectively. Marine Technologies handled the on-site installation of the docks, and water, electrical and plumbing was handled in-house.

The marina is a combination of fixed and floating docks, some with boatlifts. The new updates all include floating docks, and the marina would like to convert the entire facility to floating, as it funds future phases of the renovation. Some new boatlifts were added with the updates and more will be added in the future.

With increased traffic and tourism in the area, the marina basin needed more protection from waves. Its new floating wave attenuator, made of timber and concrete, is 488 feet long. Not only does it provide protection for the marina, it also provides dockage, limited only to vessels with a 10-foot draft or less, typically up to about 120 feet. The last 150 feet of the dock has the new fuel dock.

The project involved shortening two docks to accommodate the new attenuator, and the marina installed two new floating T-heads docks with additional dockage at the end of the shortened piers. The new floating docks accommodate vessels 40 to 70 feet.

On the marina’s older fixed docks, the slips range from 24 to 55 feet. The marina installed eight new Eaton Lighthouse power pedestals, to match its other pedestals on-site. The new fuel dock has Wayne Fueling Systems dispensers, including low-flow and high-flow diesel. All new fuel line is Omega Flex, a double walled flexible fuel line, which is required by the state in fuel service installations.

The marina will continue to do smaller updates this year, with the hopes of starting more large-scale renovations again in a few years. The board and management formed a strategic planning community, which has helped inform its decisions about renovations and continue to reevaluate the market and plans on an annual basis. While the marina is limited somewhat by its bylaws, which dictate what can be done to reconfigure and change slips, and decisions are sometimes slow going, as it takes time to work through the member approvals, the process ensures that decisions are made with owner support and in the best financial interest of the business long term.

Bowleys Marina and its many owners also have realized that it needs to focus more on long-term profit centers, if it wants to continue as a member-owned facility and draw in other new boaters in the area. “Our capital investment and reserve funds are much bigger than they used to be,” Markle said. “We have to think like a business.”

In addition to leasing slips to boaters outside the ownership, Bowleys has focused on new profit centers to support its growth. Boatlifts have been a growing revenue for the marina. It has six floating HarborHoist lifts, three mechanical lifts from Magnum, and eight PWC docking platforms. This spring, the marina will install three additional Magnum cable lifts and dockage for five additional PWCs.

Winter storage is also an area where the marina looks to expand on profits. For members, winter storage on the hard is part of the contract. This fall, the marina will bring on a new hydraulic trailer, which should help provide winter storage for an additional 50 boats.

The Middle River area is growing. Markle said boating in the area is becoming

more popular, and the county is spending big bucks to attract more tourism to the area. Growth in commercial and residential properties in the area, new highways and airport renovations are fueling long-term population growth around the marina, and Bowleys Marina plans to be ready for a growth in tourism. The Bowleys owner group has found a good partnership and leadership in Coastal Properties Management, who has helped members start thinking more about their pastime, as an enterprise.