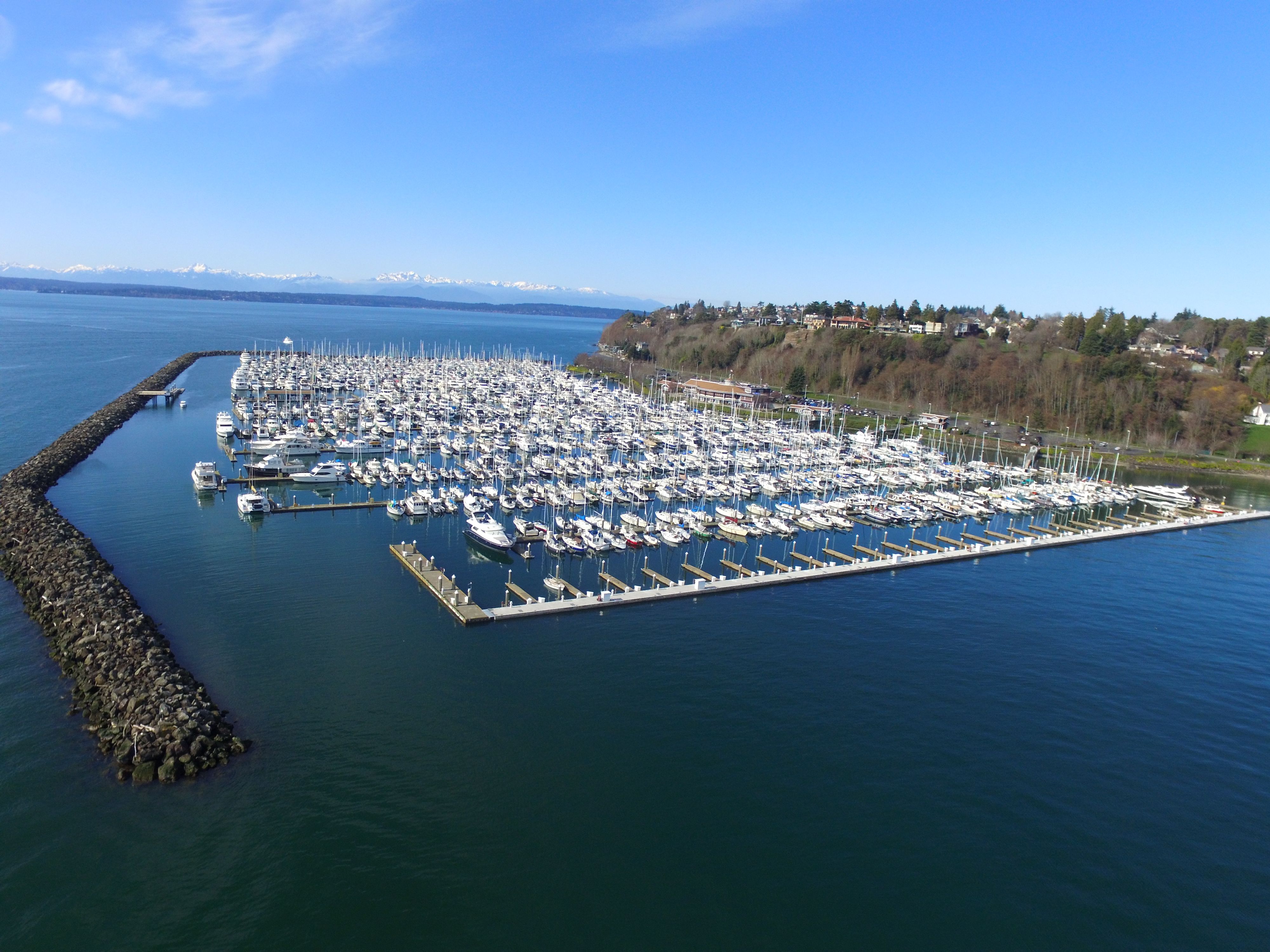 “I sleep better at night,” Jones said. “During big storms I would worry about the old dock and the boats. Now it’s wonderful to know the boats are safe and aren’t even moving.”

The original dock was a concrete POD system with 10-foot by 12-foot sections that was installed in 1991 when the marina was built. Jones said the original dock design did not work well, and a wooden wave attenuator fence was designed and installed on the dock.

“We got about 25 to 30 years out of it,” he said. “It was a good design and it worked well.” However, over time the wooden fence began rotting, and the repairs were getting more costly. Some years, Jones might spend $50,000 repairing it.

Three years ago, Jones began the design and permitting process to build a new breakwater. “The permitting was awful,” he said. “Everything took longer and cost more.” Jones said he thought the permitting might go smoothly, since the marina was just tearing out an old dock and building a more environmentally sound one in its place. That wasn’t the case. “The time and money it cost to do these things is ridiculous,” he said.

The permitting process in Washington state also requires that local tribes sign off on any projects. That took about four to six months. Jones said the City of Seattle permit “was a bear to get” and took the longest because the office is so busy due to all the growth in the area.

The delays in permitting created a challenge once construction started. The project received the final permits in mid-September. “Losing six weeks, we lost our best weather,” said Bryan White, owner/CEO of AMO Construction. That meant crews were working through November and December, and there were a couple of days they couldn’t move the new floats because of the weather. “That is one thing we came up against that set us back,” White said.

New Breakwater
The new 1,000-foot breakwater was built using seven large floating concrete sections. International Marine Floatation Systems Inc. (IMFS) built the floats at its yard in Delta, B.C., Canada. The pieces were 14 feet wide and range in length from 102 feet to 160 feet, with a depth of 6 feet to 10 feet. The largest pieces weighed one million pounds.

Each float is a four-sided concrete box filled with expanded polystyrene (EPS). IMFS Senior Project Manager Mathias Tobias describes the process of building each float: “We first build the bottom concrete slab, then we place the large foam block on top of the bottom slab, and we then form the walls and top slab around those blocks.” In addition to the concrete and foam, the floats include reinforcing steel, anchor bolts and components for electrical chases such as PVC pipes.

Tobias said because of the large size of the floats, IMFS could only build two at a time on its floating drydock. It took about nine months to complete construction of the floats. The finished pieces were transported by tug two at a time from Delta to Seattle, a journey of up to 32 hours.

AMO Construction hired a subcontractor to assist with removing the old dock, which required underwater work to disconnect the wave fence panels from the dock. The dock itself was still in fair shape and was donated to the Port of Poulsbo. “There’s a lot of life left in the old dock,” Jones said. “They may get another 20 years of use from it.”

Donating the old dock fits with Elliott Bay’s Clean Marina certification and environmental best practices to recycle or re-use. “I like that the old floats got used,” said White, who lives in Poulsbo. “That was a bonus that these got a re-use and didn’t have to be demoed out.”

Phased Construction
When it came time to install the new floats, White did not want to remove the entire old dock at one time. “It was a working part of their breakwater,” he said. “We closed it out as we were working so no waves could enter and damage the marina.”

To do that, AMO cut out about 180-foot sections of the old dock one at a time and then replaced it with a section of the new float. Connecting the floats are 2.5-inch galvanized rods that run through a 15-foot x 15-foot rubber block that sits in a pocket in each float. Tobias said the connector can be removed and replaced as needed without disassembling the whole system, and it does not interfere with electrical cables and water lines.

The challenging part of the installation was ensuring that everything lined up just right in order to use the 17 existing piling and to reconnect 27 finger docks.

“It was something I was worried about,” White said. “If there was one wrong down the line, it wouldn’t work.”

But it all came together just as planned. “They hit it right on the money,” White said. “It was straighter than the old dock, and that doesn’t always happen.”
Jones was also impressed to see it all come back together. “They did an amazing job,” he said. “That’s a real feather in their cap – the quality of the engineering and the design.” Being able to use the existing piling and maintain the finger docks was a money saver as well.

IMFS gives credit to All-Span Engineering Ltd. for engineering the new breakwater and Bill Gerken of Moffatt & Nichol Engineers who facilitated the site engineering and permits.

The project was cleared for occupancy in December, just before Christmas, and Jones is pleased with the final results.

“They are beautiful, and they do not move,” he said. “It’s a robust dock.”
Although the boating season has not started yet, Jones said the customers who have seen the new dock are enjoying it. “People love it. It’s the only dock like this in the region. People aren’t used to walking on a floating dock that doesn’t move.”

The new dock offers up to 300-feet for docking large yachts. “We wanted to build something to suit the demands of the superyachts,” Jones said. They also added a new power system to meet the needs of the larger boats and rewired new dock boxes on the finger docks, which offer 60 slips.

Reduced Maintenance
The new dock will help reduce the marina’s maintenance cost. Tobias said IMFS recommends sealing the top deck with a silane penetrating sealer every couple of years to make it easier to clean the surface. The float-to-float connections should be checked after major weather events and three to four times a year. Unlike the old wave fence, this new dock requires no underwater maintenance.

With less wave action entering the marina basin, Jones said the new breakwater will help extend the lifespan of the whole facility. “It’s never a good time to do it, and from an environmental standpoint, it’s getting harder and harder to do these kinds of things,” he said. “But from a long-term standpoint it had to be done. The long-term protection of the entire marina is where the return is.”