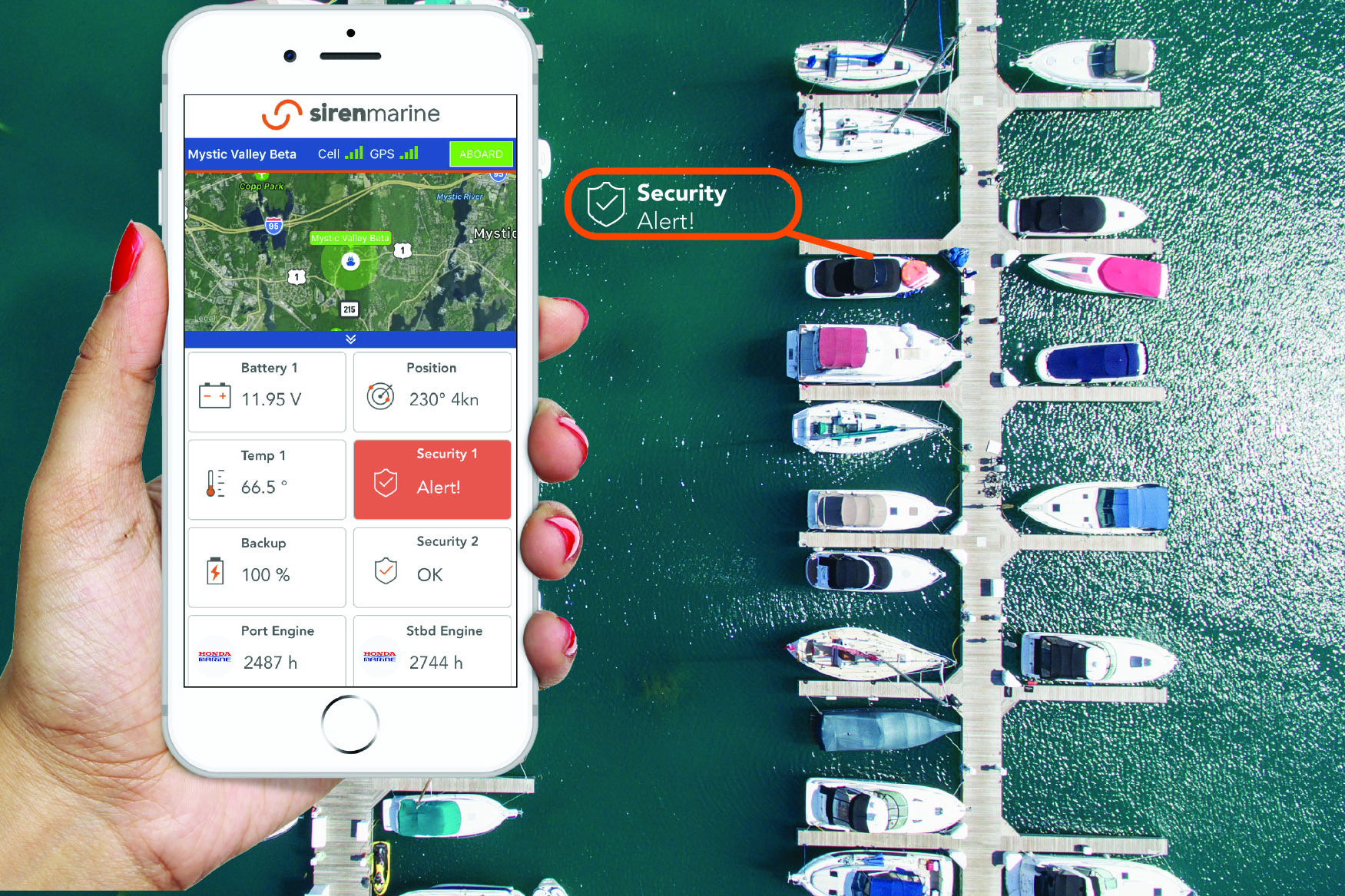 Partnership, Technology and Moving the Industry: Oasis Marinas Teams Up With Siren Marine

Oasis Marinas has teamed up with Siren Marine to bring boat monitoring technology to boaters and marinas. The marina management firm will sell and promote Siren Marine’s Connected Boat® technology through its facilities.

Siren’s system can bring greater peace of mind to boaters when they’re away from their boats and give marina operators access to important information about the vessels at their docks. This will help serve boaters with more efficiency, finding problems before they occur or before customers even know there is an issue.

In a short time, Cowens built a company that has positioned itself to make those kinds of changes in the industry. It seems only fitting that the revolutionary idea for his company came only six years ago, as a project in
business school. With an open mind and a good plan, Cowens embraced
technology as the future of marinas. His partnerships help make that vision
a reality, and the company has grown exponentially in many directions, not
just marina management.

The Beginning
Cowens was born and raised in Maryland. He joined the Army in high
school and attended Anne Arundel Community College, then Salisbury University, while he was enlisted. He received commission as an officer upon
graduation, along with an undergraduate degree in psychology and military history. After that, Cowens started working for a company in Annapolis called Towne Park, a third-party service management company that runs front of the house operations for numerous business sectors.

Cowens started there as a valet, while he figured out his next move, except he
never went anywhere. The company started to take off, and for the next 20 years, he grew with the company becoming vice president of operations.
Towne Park grew to more than 14,000 employees, starting in the hotel industry, and branching to the casino and health care industries. About every three years, the company would recapitalize, many times to create cash flow for acquisitions. In 2012, Towne Park said that the next time it did so, it would be selling controlling interest. That’s when Cowens knew it
was time to make some changes.

The next year, he enrolled in an MBA program at the University of Maryland.
As a longtime boater, Cowens had had frustrating experiences at marinas.
While studying for an accounting exam, he had one of those terrible experiences at a marina with his family, and he said,
“I know what I’m going to do: Oasis Marinas.” A family member said, “Cool
name. What does it do?”

“We’re going to be the Marriott of the marina world,” Cowens said. The
company would not own marinas, but manage them, as the company
tagline says – Our system. Your marina. Everyone’s Oasis.

Soon after, he pitched the idea at his business school program and started
building out the idea and forming his team. At the time, Cowens said he
was astonished by how fragmented the industry was. In 2013, the largest
management company owned 20 marinas.

Business school was the perfect opportunity to figure out how to translate
what he did for the hotel industry and apply it to the marina space. Cowens
said, they looked for pain points in the marina industry, looking for its
opportunities. What he found was a lack of technology. At the time, there
were no online aggregators for slips like hotels.com. Cowens told his team working on the Oasis Marinas project that he had seen this online boom play out in the hotel industry, and he knew what was coming for the boating world.

“We have a decision to make,” he said. “Do we want to start two companies or become a customer of whoever starts this business in the next 12 to 15 months?”

Split Partnership
In 2015, Cowens and his team started two companies, and Snag-A-Slip was
born along with Oasis Marinas. The two companies have two separate teams,
but collaborate on marketing and information technology.

Before graduating business school, Cowens already had two businesses
to start. His professors didn’t have many students that were creating one
business that was ready to launch, and his teachers didn’t have much more left
to teach him, so Cowens’ professor told him to go find a customer.

Cowens went to a marina owner who he respected very much, Tim
O’Donald, president of Harbor East Management Group in Baltimore,
Maryland. Cowens pitched the idea and sold him on it. Oasis Marinas had
its first client on September 14, 2015.

The management company pitched a $9 million renovation to ownership,
which was completed in June 2018. (See “Baltimore Harbor Updates
Marina to Match Vibrant, Revitalized Area”, in the September/October 2018
issue).

From one marina, Oasis Marinas has grown to 24 properties under its flag,
from Connecticut to Virginia. “We are actively working this year to grow our
portfolio to 40 locations,” Cowens said. Snag-A-Slip is in about 700 marinas from Canada to the Caribbean.

Oasis Marinas has also gathered other partners along the way. When
building out the Snag-A-Slip concept, Cowens said his team saw a need for
better contact with boaters. “We didn’t want to just be a one stop shop for
slips,” Cowens said. “We didn’t want that flippant of a relationship with our
customers.”

After doing some work with Joy McPeters, founder of Marinalife, a
magazine and boater membership club that connects boaters and marinas,
Cowens acquired the company in October 2017. Marinalife serves boaters
with information, travel tools, online reservations, and discounts and special
offers from marinas and other partners. Marinalife represents the boating lifestyle for the company and how it connects to boaters more deeply.

“The boater is willing to pay for great customer service,” Cowens said. “We’ve
been able to show it in the 20 plus marinas we operate.”

Now, Cowens’ newest partner will use additional technology to help better
serve the boaters. Earlier this year, Oasis Marinas partnered with Siren Marine to distribute its boat monitoring technology to its customers and other marinas and boat owners.

Connected Boat Revolution
Siren Marine’s MTC (monitor/track/ control) and Android and iOS app
monitors a boat’s condition and location from anywhere in the world. The
system provides geofence tracking and continuously monitors a range of boat
operations, such as battery condition, bilge water level, shorepower status or
temperature. The cloud-based system also provides marina managers the opportunity to assist with customers’ vessels or notify them of service and maintenance needs with Siren Fleet™.

Siren Marine has been around for about eight years, and the company
really took off with the adoption and advancement of the cell phone, said
Jeffrey Poole, vice president and director of business development for
Siren Marine. The first-generation system ran on a 2G system, which communicated via text messages. The second-generation
product, the MTC, brings more advanced tracking and control features
with the app interface and mobile access.

The technology can help marina operators monitor what’s happening
with the boats in their facility, help boaters and operators be more proactive
on repair and maintenance, or save property in emergency situations.
The system can also remotely control lights, A/C and other systems from a
mobile device. It uses multiple sensors on the boat, and Siren offers a variety
of wired and wireless options. With the new wireless option, which launched
about a year ago, the system doesn’t need wires throughout the vessel.

“We are constantly moving forward with what customers are asking for,”
Poole said.

Siren has a customer that asked to have the wine cabinets onboard
wirelessly monitored. Whatever a boater can dream to wirelessly monitor and
access, Siren has the potential to make it happen. It also has the potential to provide valuable data about boat component performance and usage to equipment manufacturers. The NMEA 2000, or N2K, is the backbone of electronics for all boats, connecting marine sensors and display units within vessels. The Siren N2K Register, which will launch later this year, will collect this systems data (from engines, generators, alarms, weather systems and more) in a format so the data can be analyzed and visualized.

Poole said all the boat manufacturers have agreed to the protocol for the
system, which will ultimately provide them with extremely valuable data
about boat performance. This system can gather millions of data points that will help manufacturers improve boat performance and design; it will also be useful to marinas and boatyards through the Siren Fleet system to monitor its fleet of boats proactively, rather than reactively, Poole said.

Connected Marina
The next step with the technology is connecting the boat data and monitoring
capabilities to a marina’s back-end SAS (Software-as-a-Service) platform. Poole sees connected marinas becoming a reality in the next five to seven years.

“If we build out our fleet app into what marinas are really looking for in a SAS platform and make it as easy as possible, these are real things operators
can use to keep customers happy,” Poole said. “If we can maximize their
efficiency through useable data, it will be a big advantage for them.”

Imagine no longer having to walk to the docks to inspect a boat, or better yet, having data that identifies a potential service problem before it occurs and an
automated notification to let the service department know.

Siren also has its eye on the environment. At the Newport International Boat Show in September, the company will launch EcoBilge, a bilge switch that can detect the difference between water and oil. It connects directly to the bilge
pump and will replace the need for a floating switch, which typically needs
replacement every few years. Cowens identifies Oasis Marinas as a customer service company with a technology solution. The company and its brands already serve marina operators and boaters, and this technology strengthens that service.

After talking with several companies building out similar technologies, “I believed [Siren Marine] was the group that could get it done and bring the product to market,” Cowens said.

Cloud-based solutions have opened up a world of technology to the industry
(and small marinas) that were saddled by server-based software, and the changes will continue to happen rapidly. In ten years, Cowens predicts there
will be significant consolidation in the software/technology space for the
marina industry. “Many groups are siloed, trying to do it all, and companies
are racing to build out features to compete with each other,” he said.

The winners of that competition, Cowens thinks, will be those that find
meaningful ways to partner, focusing on what each company does best.