Engineers must admit to a couple of genetic flaws they share as a professional species. First, most engineers can only design facilities that have straight lines and walls and square corners. This is problematic when you are dealing with the physical environment, as that is not what Mother Nature wants to happen. The other flaw is engineers tend to get overly focused on what happens in extreme situations, when something might break, fail or even EXPLODE! It is an engineer’s tendency to look primarily at those extreme conditions and to make sure the design can withstand them. In doing so, however, engineers can forget to address the design needs posed by normal daily conditions.

When engineers are dealing with a marine environment, there are lots things that subtly (or not so subtly) change as conditions get worse. For example, if a river’s flow doubles its normal speed during a flood, the force it applies to a mooring goes up by a factor of four. At the same time, that doubling of flow speed can cause river-bottom sediment to become mobile and scour, which could undermine the mooring structure. In response, engineers build things big and robust to counteract those forces.

However, what happens when the flow speed returns to normal, cutting the flow speed in half? The scouring stops, but if not properly designed the more robust structure that was put in place to withstand the flood can cause sedimentation and shoaling that was not a problem before. Suddenly, the marina starts silting in under normal conditions because of trying to protect it from the extreme ones.

Dynamic Basins
This dynamic frequently comes into play when addressing a primary concern for a marina basin: basin tranquility. As previously examined in the January 2017 Water Marks article, a long-assumed and accepted standard for good basin tranquility was 1-foot wave heights. However, that standard value has no relation to the event that might be generating it, such as a boat wake, or a gentle breeze, or even a hurricane. The analysis for that article indicated that when causation factors are taken into account, the appropriate tranquility level for a basin could be a level greater or less than 1-foot waves.

The most recent edition of the ASCE Manual 50: Planning and Design Guidelines for Small Craft Harbors (2012) explains how a more accurate determination of acceptable wave heights in a basin must consider the context for tranquility criteria. Those criteria, presented in Figure 1, relate acceptable agitation levels to both frequency of event recurrence (such as weekly, annual or 50-year return periods), and also to how the vessels are oriented in their berths relative to the direction of the waves. When those factors are taken into account, the acceptable agitation levels can range from as little as 0.25 feet to as much as 2-foot waves. Having a very robust breakwater does not automatically exempt a marina from unacceptable agitation in its basin. Improperly aligned slips may potentially leave boaters facing uncomfortable or even dangerous conditions inside the harbor.

Everyday Design
Developed in a study conducted by Northwest Hydraulic consultants for Environment Canada (1980), these wave climate numbers take into consideration factors, such as moored vessel movement, fouling of sheets on sailboats with adjacent vessels, and even safety and comfort of marina staff having to work the floats during the wave event. To understand the implications this has for designing for everyday operating conditions, it is worth taking a second look at Figure 2, which was originally published in the January 2017 article. An engineer’s typical reaction is to jump to the far-right side of that curve to understand the design performance required during the extreme events. Instead, let’s look first at the other end of those curves to assess how design must address weekly and annual wave conditions.

The left side of the curve represents what’s acceptable during normal conditions that marinas and their boaters will face most of the time. While these conditions don’t require the robust protection required for more extreme events, they still might require special protections or preparations as part of the basin design. For example, moored boats that are impacted by beam seas (waves striking the side of the boat) require a more tranquil wave environment than those moored perpendicular to incoming waves.

Drilling further into these more typical conditions reveals there is plenty to worry about from a design standpoint. Figure 3 summarizes the findings of a report prepared by PIANC, showing the recommended tranquility levels for wave events experienced or exceeded at least once annually. 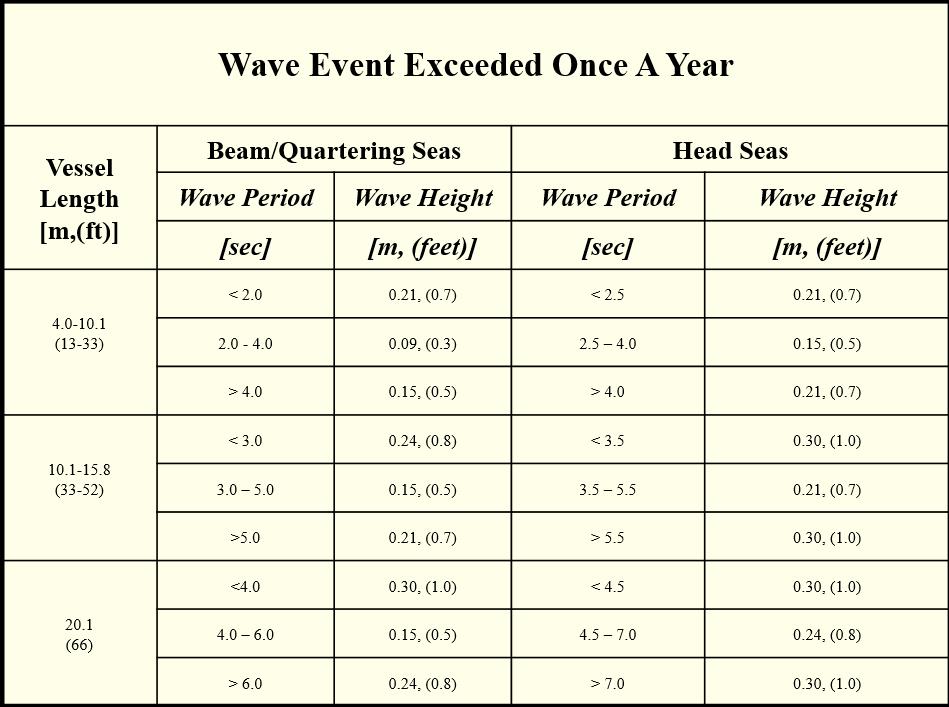 Note that acceptable wave conditions vary in relation to the size of the boat they are impacting. Embedded in these overall criteria is an additional consideration that further restricts what is allowable for good tranquility. Analysis indicates that if your marina experiences wave periods that range from 2 to 4 seconds, your wave protection system must reduce the acceptable wave heights by at least an additional 33 percent, for both beam and head seas.

The reason for this is fundamental physics. There is a natural period of vibrating or oscillating response to any dynamic input known as resonance. Drivers experience this if their car’s wheels are not properly balanced; the car suddenly starts shaking when it reaches a particular speed. At that magical speed, the vibrations caused by the car’s movement exactly match the natural frequency of the car’s structure, causing maximum vibration of the car. The same thing happens for boats. Depending on their particular shape, size and weight distribution, every floating object has a natural frequency, or period, at which it suddenly is very responsive to waves. Generally speaking, all vessels of a particular size have roughly the same response period; most boats, even up to 100 feet or so in length, reach their resonant frequency in the wave period range of 2 to 4 seconds.

This clearly indicates that engineers need to pay special attention to basin agitation when wave periods are in the range of 2–4 seconds. Particularly for normal operating conditions, controlling the level of agitation caused by wave period becomes just as important as diminishing wave heights.

Basin Tranquility
Let’s assume that some sort of floating wave attenuator would be sufficient to address expected wave heights for a marina. Let’s consider both a 2-second and a 4-second wave of 3 feet in height encounter an attenuation barrier that penetrates half the water depth (5 feet in this example).

Both the 2-second and 4-second period waves can potentially occur every day, and certainly would occur annually. If both waves have the same incoming height of 3 feet., the effects of a 2-second waves are not felt near the bottom of the basin, while the 4-second waves are felt at the bottom with even stronger effects at the water surface. When the 2-second wave hits the attenuator, only 5 percent of its wave power leaks under the barrier; that means that the attenuator is doing its job and we can expect calm conditions in the basin for that event.

But if instead, we have a 4-second wave period (which is just as likely to occur annually as the 2-second wave), 40 percent of the wave power still leaks in under the barrier. Translating that power to a resultant wave height, the same incoming wave height of 3 feet results in a 0.7-foot wave on the lee of the wall for a 2-second wave period, but a 1.2-foot high wave for the 4 second period. While that wave height is acceptable under certain conditions, in this case it could lead to uncomfortably vibrating boats. Applying general height guidelines blindly without understanding the complete physics of the waves involved can clearly lead to unexpected and undesirable outcomes.

More Common Waves
To design a marina to be as operable in annual conditions as in severe storm conditions, engineers must be sensitive to the full nature of the more typical waves that can sneak into the marina and understand how those waves will interact with marina infrastructure. The sources of these more common waves are often dismissed as inconsequential, whether breezes blowing across an inland lake, or offshore winds created by thermals at the shore, or even just wakes generated by passing boats. The challenge is to balance designing for extremes with mitigating unsettling conditions experienced more regularly.

Engineers typically design marinas to be resilient enough to survive a major storm likely to occur during their operational life, such as the 50-year event. They also design the mooring of floating docks to accommodate large wave action, and make that pontoon and dock system flexible enough to move and snake a little with the passing of those large waves. The docks survive the big storm, but how do they perform on a normal day? Do they bounce up and down because the connections are too soft? Do women’s shoe heels get caught in the hinges, or do children get tossed about a bit? Did the designer only think about reducing wave heights without also thinking about the wave periods entering the basin? Given that 50 percent larger waves can actually be tolerable if the wave periods are only slightly longer, the primary design constraint may not be the extreme wave event as much as a seemingly less threatening but more frequently destabilizing condition.

Proper marina design needs to account for the full range of design events that impact operations. While resilience to withstand more severe events is important, design must also address the typical operating environment to maximize user comfort and safety. To have a truly resilient, well-performing marina, the designer cannot worry just about the extreme event that would seem to pose the most inherent risk, but must focus equally on those everyday events that can make or break a great boating experience.