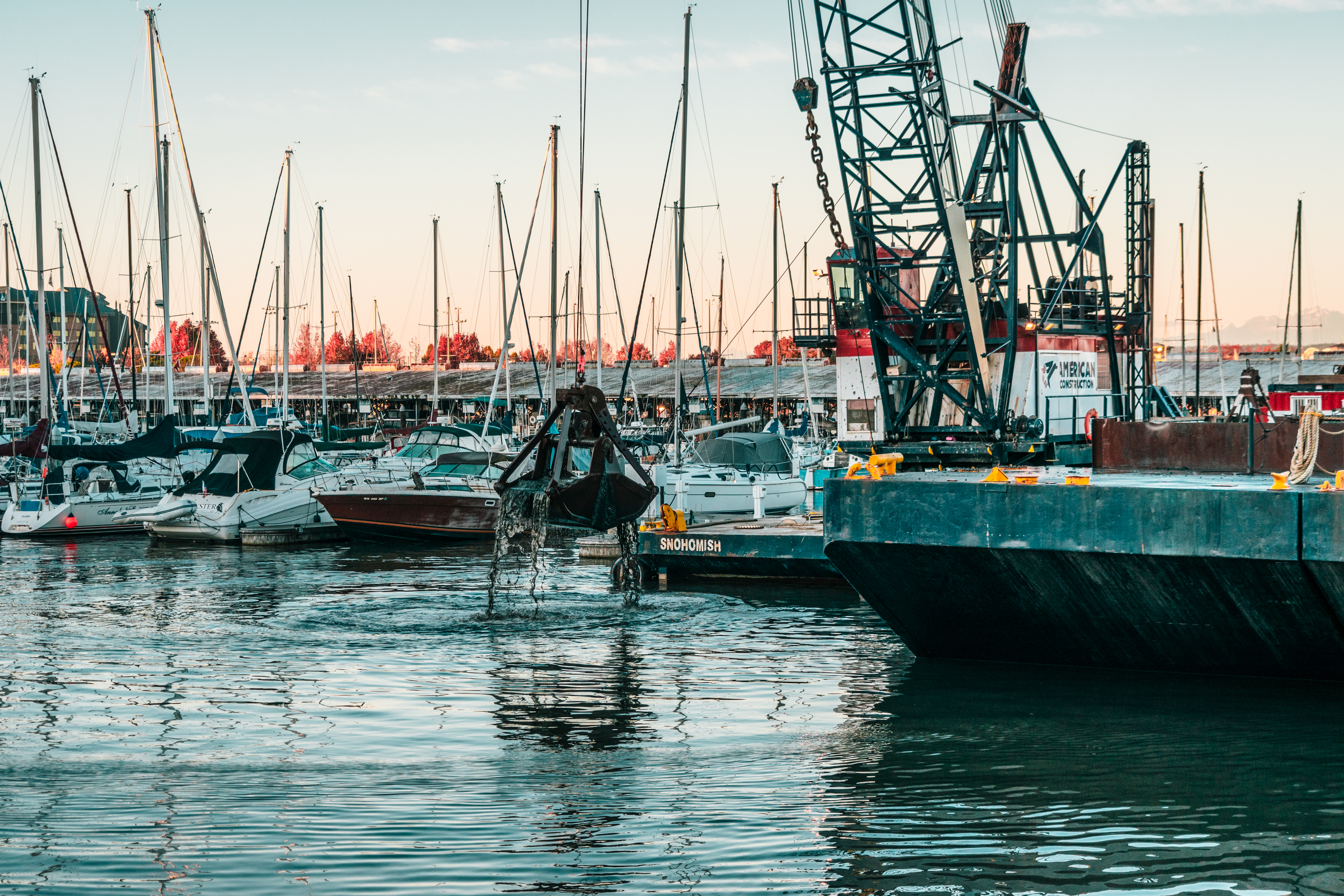 The Port of Everett, located in Washington state, has been undertaking a major renovation of its marina. Key to its successful project is keeping current and new boating tenants happy by maintaining water depths through dredging. As many dredging projects at marinas do, this one has faced obstacles and time delays, but the Port of Everett team has worked through them to bring the marina into the new decade.

Cleanup and Modular Wetland
Prior to the port’s major overhaul project, it did a large-scale brownfield cleanup across a 65-acre waterfront property. This included the northeast corner of the marina that previously housed Everett Shipyard, which is the epicenter of its marina renovation efforts. The first step of the renovation was to execute the Everett Shipyard cleanup—costing $13 million, it included upland soil cleanup, contaminated sediment dredging, removal and replacement of creosote piles, old dock demolition, and construction of a new bulkhead. This work was completed in 2015.

“A major interest of the Port and our agency partners was to keep this area clean and ensure it doesn’t become re-contaminated,” Erik Gerking, director of environmental programs for the port, said. Untreated stormwater can potentially degrade water and sediment quality.

To address this the port installed modular wetland treatment systems, which are prefabricated underground systems designed to work like a wetland. Every drop of stormwater that goes into the marina now passes through three filtering systems.

“They work great. We reviewed many options, but this was both the most cost effective to install and maintain, and the most effective at cleaning contaminants from stormwater. Stormwater goes into an underground vault that removes big debris, then water passes through a sandy matrix of organic material, and a final filtering treatment knocks out anything left over,” Gerking said.

To ensure clean water for the future throughout the port, the systems are being installed at every outfall on the property as upland development progresses.

Permitting Roadblocks
In 2009, the port began applying for the required federal and state permits to dredge the marina basin as part of an entire renovation of the port. The project had already been delayed due to the recession, so the port was eager to get dredging underway. However, at that time, new rules came into effect that made dredging more strict, including seemingly impossible standards for open water disposal, which is what the port had historically relied for periodic maintenance dredging.

“This was particularly problematic for us due to ongoing siltation from the Snohomish river. We had to dredge, but if we would have had to take material to an upland disposal site, the cost would have risen from $5 million to an estimated $50 million. We could not have dredged the marina at that price,” Gerking said.

To add further complication, the marina renovation is tied to a new next-door development, Waterfront Place, which had already been approved. When complete that project will be a mixed-use property that will bring in an estimated $9 million in annual tax revenues, jobs and open space. “The $500 million public/private investment hinged on getting the basin dredged,” Gerking said.

In response, the port and its environmental consultant, Windward Environmental, developed a new testing protocol for dredged material to determine if it was safe for open-water disposal. The testing protocol was for a scientific study, known as a bioaccumulation study. The port worked this out in coordination with state and federal agencies and through the U.S. Army Corps of Engineers’ Dredged Material Management Program. It took nearly seven years for the port arrive at these scientific protocol that then proved the material dredged from the port’s marina was safe for open-water disposal. On top of that, state and federal permits took an additional 14 months.

The efforts were rewarded, and not just with the permits. In May 2019, the port earned the Washington Public Ports Association’s 2019 Environmental Project of the Year Award for its innovation in developing the new testing protocol for dredged material management disposal. Gerking pointed out that other ports and marinas in the Puget Sound area are starting to use the same protocol, enabling more cost effective and safe placement of dredged material.

With the permit in hand, the port was authorized to place 160,000 cubic yards of material at the open water disposal located offshore in Puget Sound at depths of about 500 feet. The work took the South and Central Marinas back to their authorized drafts of -12 to -14 feet.

To date, phases one and two of the dredging have been completed. The dredging has been phased in with dock improvements. The oldest part of the marina, the northeast corner, was addressed first to be timed with the upland development, which includes a new hotel. Each phase combined dredging with old dock demolition and new dock construction. With boats and docks out of the way, there was wide open space for dredging. See the chart on page xx.

“There’s a huge cost savings in doing demolition first and opening up the area so we could use large dredges. We used the biggest dredge rigs available in the region,” Gerking said.

The only other hiccup for dredging was the discovery of a fluff layer that was more than six feet deep in some areas. “Our surveys left us to believe it was sediment (that needed dredging) but it was more of a haze of clay and silt particles so dredging just brought up cloudy, dirty water. Eventually, we used a lead line to figure out where sediment was instead of our multibeam survey,” Gerking said. Sometimes the old-fashioned way proves to be the most efficient, he added.

Added Benefit
Outside of the direct benefits from the renovation and deeper water, the port also benefits from placement of some of the dredged materials on Jetty Island. Created in the late 1800s to protect the harbor and navigation channel, the jetty has become prime wildlife habitat and a recreational area with a 1,500-acre, mile-long sandy beach, the longest beach on Puget Sound. The beach area is a mecca for kite boarders and boats. A free ferry transports 50,000 people to the area each year.

The jetty receives material from the Corps’ annual maintenance dredging on the upper and lower channel of Everett Harbor and the Snohomish River.
“The channels run along our properties and loop further up the river. They dredge the navigation channel every year, alternating between the upper and lower areas of our marinas and the port’s two basins,” Gerking said.

Marina renovations are continuing at the port with phase three completed and phase four, the final stage, underway. Gerking said the next dredging phase will likely be undertaken in the 2021-2022 dredge window with the focus for this year on clearing out more of the old infrastructure.