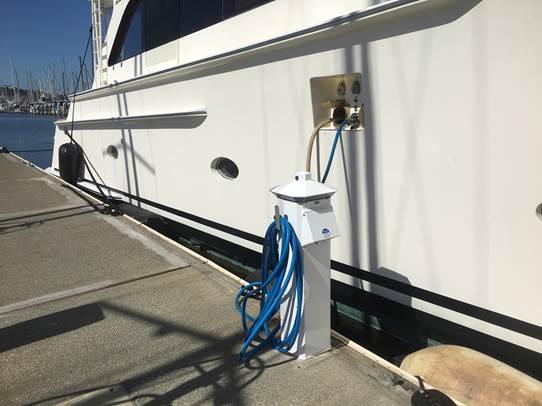 Marina Bay Yacht Harbor has embarked on a long-term project to replace the power centers for more than 800 slips at the marina in Richmond, California.
Harbormaster Steve Orosz said the marina is phasing in the updates over several years due to the large number of power centers to be replaced. The project came about after it became difficult to find parts for the existing power centers, some of which were installed when the marina was built in the 1980s. Some power centers were upgraded in the early 2000s, but even those were starting to require repairs and parts were hard to find.

Power Renovations
“We are in an almost constant process of upgrading and replacing a number of units every year. We replace an average of 50 to 75 units each year,” Orosz said.

He estimates the cost per slip is $1,000 to $1,500, depending on the configuration of the power center and if other associated repairs are needed during the process. The overall cost is included in the marina’s annual maintenance budget. Often when they start working on the power centers, they have to replace the dock box and kneeboards underneath, which can entail changing out the water faucet and supply line. Depending on other tasks scheduled that day, the maintenance staff can replace three or four power centers in a day.

The maintenance staff takes advantage of other repair projects, such as waler replacement, which require the removal of dock boxes and kneeboards over a large area, to replace the old with new whenever possible. However, most of the replacements have been on an as-needed basis when there is an issue with the existing equipment.

The original power supplies were stainless steel Unicorn power centers with “jelly jar” type meters. “They are what started the process,” Orosz said. “We find that if we have to take them apart to make repairs, we often can’t put them back together since some parts can be badly corroded and we can’t source replacement parts.” In the early 2000s, Midwest power centers with electronic meters and plastic dock boxes were installed. Over time, the plastic dock boxes became brittle and broke, so they have started replacing those with fiberglass dock boxes.

The majority of the slips at the marina have individual dock boxes and power centers, and Orosz said the easiest solution was to continue with that model when making the upgrades. “If we ever do a complete rebuild, we would certainly consider going with pedestals only and eliminating the dock boxes,” he said. “Besides being a cleaner look on the dock, it is simpler and more environmentally sound since there is no storage on the dock that can accumulate hazardous waste like old paint and varnish.”

Orosz said new power center options have become more affordable over the years. They chose Eaton Newport Harbor Mate power centers attached to fiberglass dock boxes for most of the slips. Eaton Lighthouse pedestals were installed at select locations, such as end-ties and side-ties. Orosz said the pedestals work well in those locations because they have the option of choosing dual 30-amp/50-amp or single 30-amp as needed.

“The new power centers are well built and because of their design they are easier for marina maintenance staff to install and maintain than the ones they are replacing. Because of the design elements there is more room for added features, specifically the MarineSync RUM (Remote Utility Monitoring) modules with ground fault monitoring and power relays for remote power shut-off.”

Meter Certification
California law requires the sub-meters for the slips to be certified by the local Weights and Measures office before being installed at the marina.

Paul Seff, an engineering manager for Eaton, said when the company receives an order for meters to be installed in California, it advises customers to allow extra time for the certification process.

Seff said depending on each county office’s workload, it could take two weeks to get the meters back or as long as 12 to 14 weeks. Once Eaton receives the sealed meters from the Weights and Measures office, it takes another week to 10 days for the meter to be installed on the pedestal.

The state requires 10 percent of the marina’s meters to be recertified each year, and each certification is valid for 10 years. “We address that with our replacement rather than pulling meters out of existing units and sending them in, which Weights and Measures agreed was not practical,” Orosz said.

The California State Legislature created the Office of State Superintendent of Weights and Measures in 1913 to “oversee the development of specifications and tolerances for weighing and measuring devices, the accuracy of such devices used in commerce, inspection of railroad track scales, and weights and measures used in state hospitals and prisons.”

The office’s responsibilities evolved over the years, but the primary function is to ensure “fair and honest competition for industry and accurate value comparison for consumers.”

Although the installation of sub-meters can be time consuming and costly up front, the benefit is that the marina can charge tenants for actual electricity usage. The marina is limited on what it can charge based on the appropriate rates set by the local utility company. “We recover about 80 percent of our electrical costs for the docks, which so far has seemed reasonable,” Orosz said. (The remaining 20 percent is attributed to common usage such as lighting and guest usage.) “The annual electric bill for the entire marina is about $130,000, so that recovery adds up.”

To avoid the hassle of complying with the state’s meter certification, some marinas build the electric cost into their berth fees or charge a lump sum every month. However, Orosz said that comes with a trade-off. “It doesn’t encourage conservation since you get some people who want to get their ‘money’s worth’ and use as much electricity as they feel like.”

“We decided to add MarineSync Remote Utility Monitoring units,” Orosz said. “The RUM units get us remote meter reading as well as ground fault monitoring at each power center. We’re in the process of retrofitting the 180 Eaton power centers we already have installed with the RUM units and will order them pre-installed going forward.”

Seff said installing the RUM units on each slip allows the marina staff to narrow down the problem when there is a ground fault reading.

The units also allow the marina staff to see electricity consumption data in real time, and the remote meter reading option means the staff does not have to walk from slip to slip to get meter readings for billing.

“The RUM unit adds a lot of functionality to the pedestal,” Seff said.