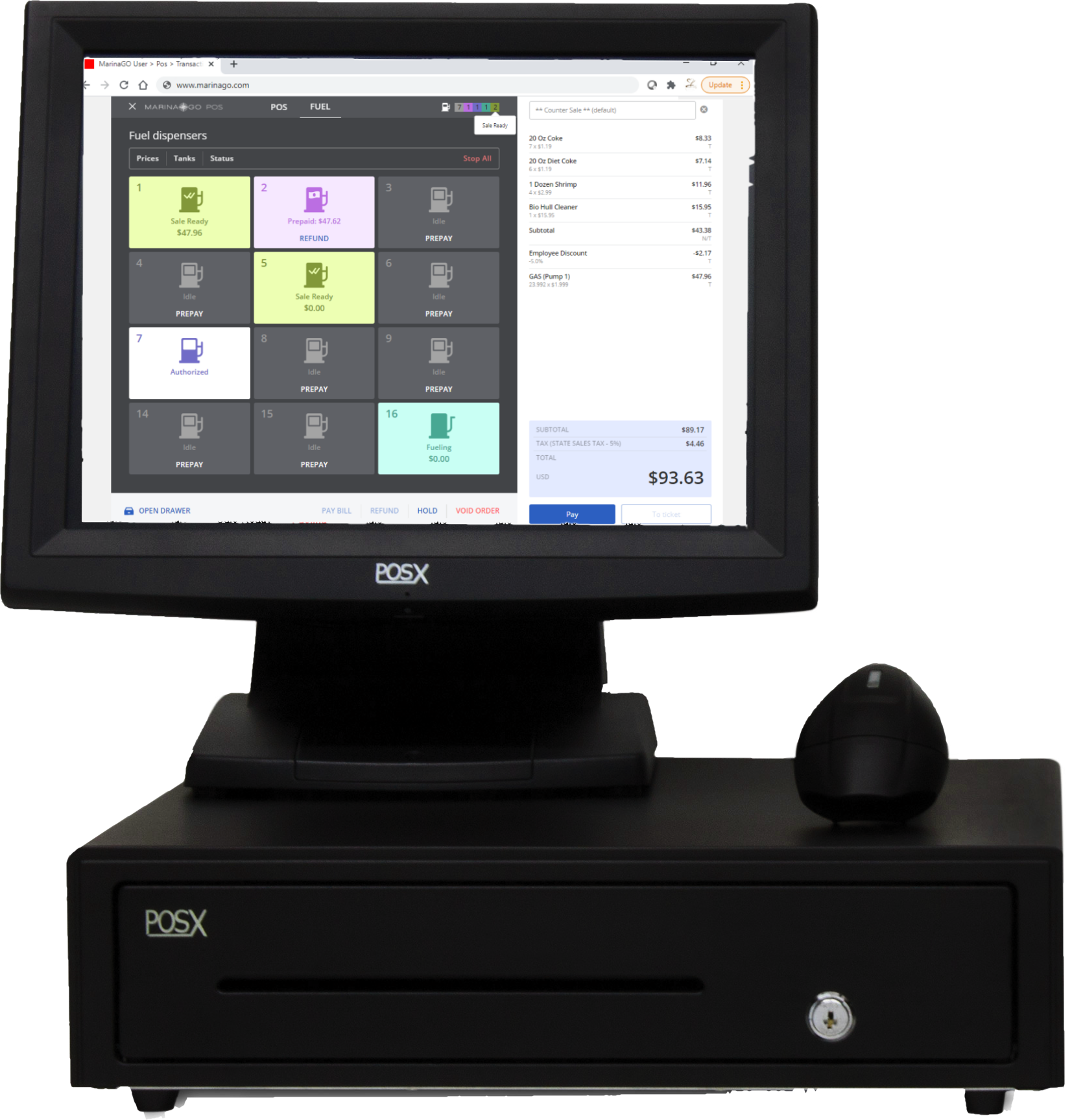 Since the time boats changed from being vessels moved by human power to those being moved by engines, fuel has been a staple for the marine industry and often a lucrative revenue source for marinas. The process of putting fuel into a boat engine has not changed much on the surface, but how that transaction is processed and recorded has gone digital creating a simplified process for both marina owners and boaters alike. Both Scribble Software and Dockwa continue to innovate on this front and shared their experience.

History
Scribble Software and Dockwa are addressing the needs at the fuel pump although from slightly different angles. Both have the goal of streamlining the process of fueling to meet the added demand from more boats and, often, fewer employees on the docks.

Scribble Software is not a newcomer to this arena. In 2005, the company integrated fueling systems into their MarinaGO marina management systems. Since that time, they have continued R&D to keep their system on the cutting edge of what marinas of today need. Vance Young, director of technology for Scribble Software, said the company first looked at adding fuel into their management software because they noticed that there was lots of human error in the traditional methods of recording fuel sales. He said an early client had twelve fuel dispensers that ran non-stop all summer and were manned by seasonal employees who used Post-It notes to record transactions and run them up to the office to be entered. “The owner realized how much was lost to human error and began working with us on how to integrate fuel into our management system. Once he had the ability to read information in real-time and a system that wouldn’t allow any further action until a transaction was finished, he found that the system paid for itself in the very first summer of use,” Young said.

Dockwa saw similar issues at the fuel pump, but the frustration was coming from the customer side as well as the marina. As technology has grown to where nearly everyone has a phone that they use to conduct transactions, marinas seemed to be slipping behind. “Dockwa is all about how we can facilitate engagements between boaters and marinas. We’ve done that for a long time through our reservation system, but the next big chunk of the puzzle was the point-of-sale aspect,” said Jeremy Crane, chief product officer of Wanderlust Group, which is home to Dockwa and Marina.com.

For many marinas, fuel sales are their largest revenue source, but the environment in which those sales occur is challenging. “The marina environment is harsh. It’s on the water, busy, filled with seasonal employees who may not have experience and who have sunscreen on their hands. Those employees are faced with angry boaters when there’s a long line waiting to fill up. We knew we needed to make something that was dead easy to use—fast, simple, lightweight, but able to perform,” he continued.

The company worked on a beta version of their POS tool for about a year, starting it originally as an IOS tool. Last September they launched their new POS tool with fuel integration to all their existing marina customers and expanded it to all platforms.

The Products
MarinaGO offers both a desktop and cloud-based option recognizing there are marinas that have poor internet service, or owners who just prefer to have the software on their computers. Both options give the ability to operate pumps, manage fuel prices and inventory, process sales, and see a visual display of the dispensers through a fuel toolbar that directly interfaces with dispensers using graphics and animations, as well as voice audio notifications on the status of each pump. Fuel sales at the pump are recorded into back-office accounting systems.

While their fuel system operations have been a part of MarinaGO for some time, the company has continued to reinvent the product. MarinaGO first offered third-party pedestals for customers to slide their credit cards giving them the ability to pay after hours. But due to the marine environment, the pedestals were unreliable. The introduction of chip readers was also complicated for marinas because integrating chip readers into a dispenser proved difficult and expensive. “We started thinking how we could eliminate mechanical dispensers or the expense of adding chip readers. Mobile pay at the pump seemed to be the answer and two years ago we began working on that front,” Young said.

With that research, MarinaGO just introduced its latest iteration of pay at the pump, the QR code reader. The code is on a sticker on the fuel pump. Customers scan it and then have the ability to do different types of transactions, make adjustments to their accounts, and view their account history. Young said it is similar to what a consumer finds when using an online banking system with the long-term goal to expand the self-service capabilities that a marina can offer. From the scanned code, users can even authorize the dispenser.

Dockwa has incorporated its fuel into its new POS tool that encompasses any type of sales at a marina. The customer swipes a credit card to run the transaction and with an email can create a house account for use at a later time. The transactions are recorded and securely stored so there is a record built for each customer. With the credit card on file in the system, customers can have a wallet-less experience the next time they make a purchase.

Crane says another advantage, besides allowing for wallet-less transactions, is that customers receive emailed receipts that can easily be stored and retrieved for boaters who want to take advantage of the fuel tax credit for off-highway use that is available in many states. “The government wants fuel receipts to be submitted each year, but who keeps those paper receipts? Especially if you’re out on a boat for the day,” he said. Crane indicated Dockwa would continue to broaden the features and functionality of its POS system venturing into things like store inventory management, keeping it all within one platform with their comprehensive reservation system.

Going Forward
Dockwa and Scribble Software will continue to reinvent themselves and work to simplify the jobs of marina workers and the lives of their customers, but they recognize, for some facilities adding technology is an uphill battle. The marina world still has throwbacks that have not digitized and rely on pen and paper, and filling out ledgers. Crane said Dockwa spends a lot of time learning how a marina operates and then works with the facility to show how much time is wasted in handwriting receipts, stuffing envelopes, or writing in those ledgers. Dockwa demonstrates that by inserting their product into the process, the marina manager can get some time back. “We’re not inserting ourselves into the relationship between marina and boater, but we’re making it better and easier. We’re giving a way for a marina to provide a better customer experience and be more efficient with its processes,” he said.