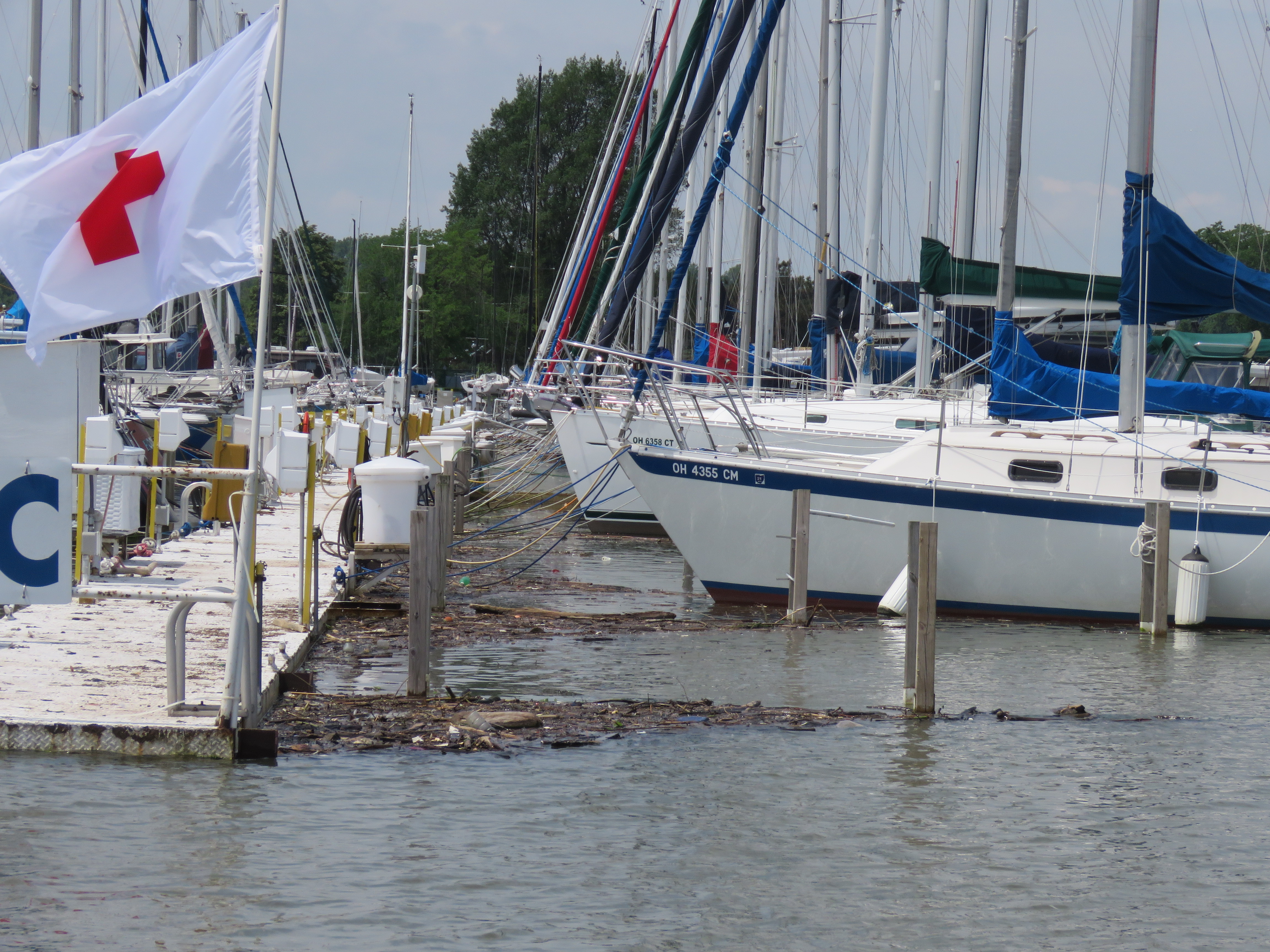 Lake Erie has seen a number of other high water cycles, such as in 1973 and 1997. (Source: U.S. Army Corps of Engineers, Great Lakes Water Levels (1918-2019). For recreational boating, these high water levels create challenges for marina operators as well as boaters. Marinas located on the record breaking high waters of the Great Lakes and their tributaries need to evaluate the risks posed by the high water and create an action plan to protect boaters, employees, boats and the physical assets of the marina.

These hidden dangers can include, but are not limited to: slipping hazards; tripping points; drop-offs; uncertain water demarcation edge positions; and strong water currents streaming across the surface of the structure. Marinas that have surfaces that are submerged need to consider the slimy conditions that have been created. These submerged surfaces may have slippery algae or other vegetation growing on them.

Breakwaters, retaining walls, islands and other structures, which during normal water cycles would protect the marina basin from wave action, may be partially or completely submerged. To further complicate the high water levels are wind-driven seiches, which can force water from one end of the lake to the other end. These short period seiche oscillation cycles can create dangerous conditions within a marina basin.

Boater Communication and Education
Numerous laws and regulations are in place to address the wake created by a moving boat. During normal boating conditions, boaters need to mind the wake created by their boats. During high water cycles, boat wakes must remain as small as possible. A small wake created by a boat transiting a marina can be strong enough to push a boat on top of a submerged fixed dock or sufficient enough to drench a person standing near the water’s edge. Marinas need to work with local authorities on educating boaters about the hazards of boat wakes during high water levels.

Fuel systems at marinas need to be diligently monitored and observed on a frequent basis. Fuel pipes, hoses and valves may now be submerged. The submerged fuel valves may not be accessible during high water cycles. In case of an emergency, employees may not have access to turn the valve(s) off. Fuel tanks (and other types of tanks) may be affected by the high water in a couple of different ways. First, as the water level rises, the fuel tank may become buoyant and shift/float from its position. Second, the high water levels may completely submerge the tank fuel fill. If the fuel fill cap is loose, it may allow water to enter the tank while allowing fuel to escape, thus leading to potentially disastrous environmental concerns.

Some marinas may be upstream in which boaters need to transit under a bridge or other structures built over the water. The clearance between the water and the bottom side of the bridge may be insufficient to allow boats to safely pass.

A marina operator has a duty and responsibility to provide a safe environment for boaters, guests and employees of the marina. Proper management of a waterfront facility is an important element for reducing the risk of hazards that threaten life and property. Depending upon the risks identified due to the high water at a marina, management may need to take further actions to protect life and property. These actions can include, but are not limited to: educating employees and boaters; erecting warning signs; barricading portions of the marina; securing electricity; temporarily closing the fuel pier; and/or temporary closing the marina. Most importantly, keep the employees, boaters, and guests using the marina safe.

Carl F. Wolf, CMM, CMI, is a marina and boatyard expert with Robson Forensic in Palm Beach Gardens, Florida. You can reach him by phone at 561/626-5771 or via email at cwolf@robsonforensic.com.