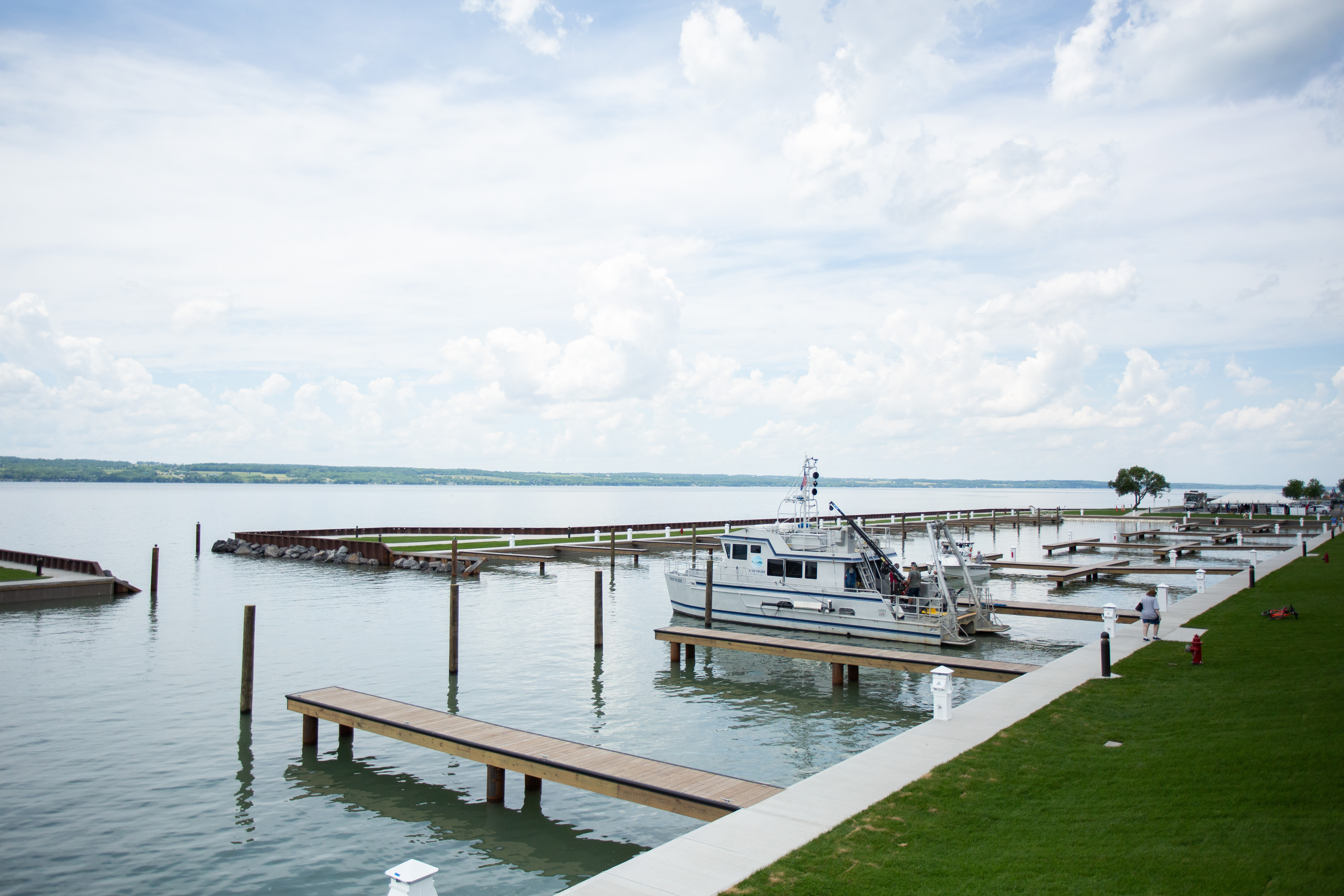 A public-private partnership has transformed the formerly dilapidated Sampson State Park Marina in the Finger Lake region of New York State into a modern, state-of-the-art facility. The New York Department of Parks partnered with the Sessler Companies of Waterloo, New York, on the $5.5 million project. The revitalized marina reopened in late June.
The marina was built in the late 1960s and had not been maintained for several years. “It was a vicious cycle; the marina fell into disrepair, so it started to lose customers, and then there was no money to keep up with the maintenance,” said Vern Sessler, one of the owners of the Sessler Companies. “In the last couple of years, this 100-slip marina had only a dozen or so boats seasonally.”
In 2018, the parks department put out an RFP, looking for a company interested in rebuilding Sampson State Park Marina and also doing some upgrades at its Seneca Lake State Park Marina. The Sessler Companies, whose owners come from a local boating family and who have always enjoyed spending time at the park, won the bid. The parks department agreed on a 40-year lease with SamSen (short for Sampson and Seneca), the entity that Sessler Companies created to manage the marinas.

Renovation work at the Sampson marina began last fall. Sessler Wrecking dredged and dewatered the marina, removed the old wooden docks and the crumbling sidewalks around them. The existing sheeting wall was shored up with a new tieback system, encased in concrete and then faced with vinyl sheeting.

The new steel frame docks, feature kebony wood decking and upgraded water and electric systems. The marina’s current footprint is very similar to the original, although the designers did reduce the number of slips so that it can accommodate today’s larger boats.

“The old configuration was not very amenable to the larger boats that we see now in the Finger Lakes. We are on the Erie Canal and the Intracoastal Waterway, so we do get some significant traffic and larger boats that come off the Erie Canal,” Sessler said. There’s now room for about 90 vessels, depending on the sizes of boats that dock at the ends of the T-docks. In addition to the new boat slips, the marina offers 10 sport ports for personal watercraft and a rebuilt launch ramp with an improved angle into the water. The marina may begin offering kayak rentals as well.

Other upgrades to Sampson State Park Marina include a new fuel dock, a new pumpout dock and two boulders that were placed at the marina’s entrance channel to help reduce wave activity from the frequent southward winds.
R. DeVincentis Construction of Binghamton, New York, performed the shoring work, landscaping and plumbing; Sessler Environmental Services did the vinyl sheeting wall and the electric installations. Edgewater Resources of Michigan designed the new marina, and Beardsley Architects + Engineers, a local company, handled the utilities.

“We are right now going through the design for building a ships store and comfort station with public restrooms. We will also have showers, laundry and bath facilities for the seasonal slip holders,” Sessler said. “For next season, we are contemplating a multi-use concessions building – lakeside bar, restaurant/event space—which will be accessible to the public as well as marina patrons. We’ll be adding some seasonal RV sites and cabin rental sites as well.”

Over the next few years, SamSen will also be investing a minimum of $1 million in upgrades to the Seneca State Park Marina, which is in much better shape than the old Sampson State Park Marina. That work will include upgrading utilities, repairing and replacing some old docks and reinforcing the sheeting wall.

Although it was late June before Sampson State Park Marina opened, it has already seen an increase in seasonal slip holders and it’s done a steady business in transient boaters. Sessler said the marina anticipates that the slips will fill up quickly next year, judging from the inquiries it’s already had.
The public-private partnership has gotten off to a very good start. “New York State Parks has been a fantastic partner,” Sessler said. “This has been a very exciting project and it has happened very quickly.”