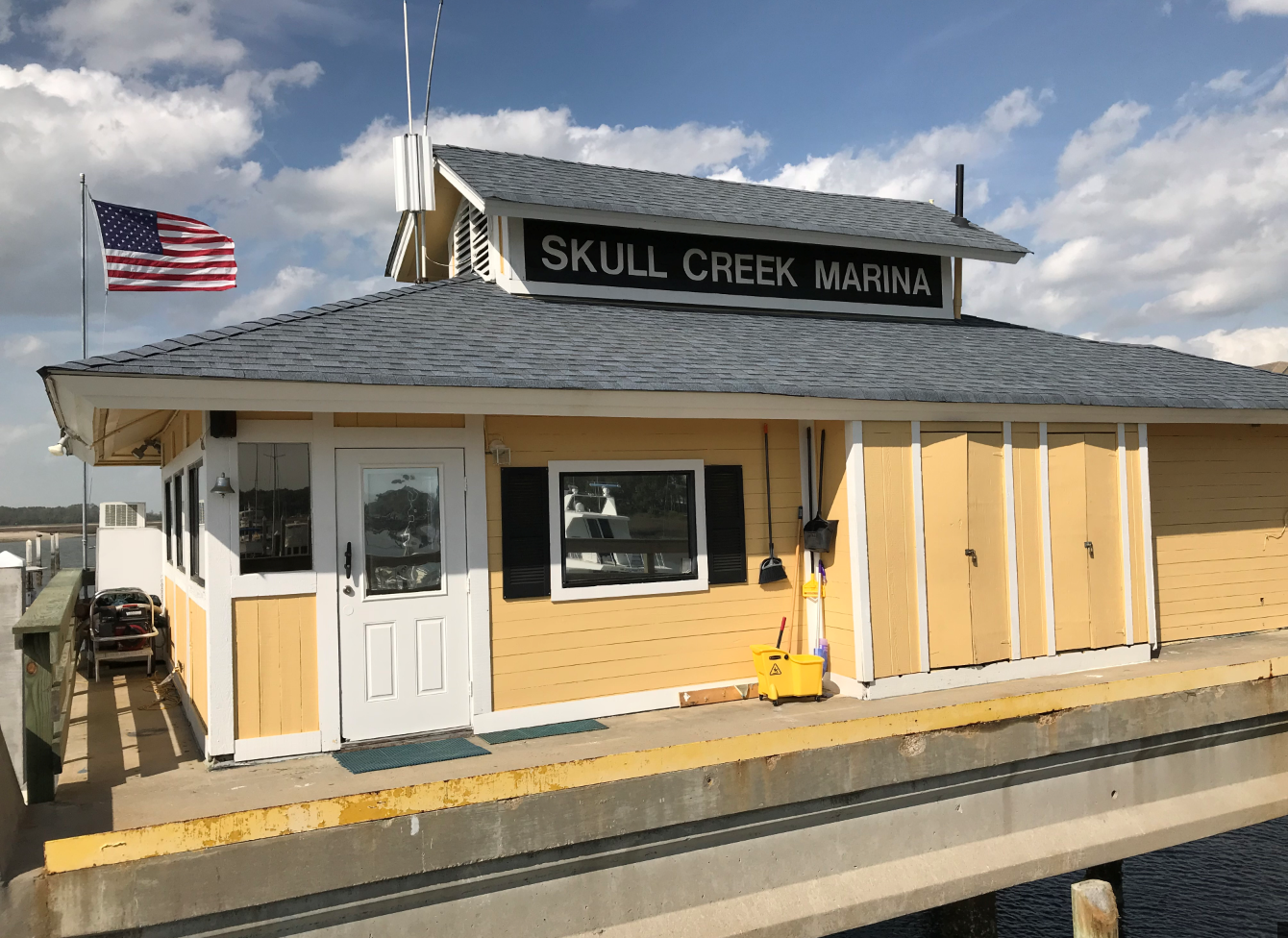 n September 2016, Leon Moore purchased Skull Creek Marina on Hilton Head Island in South Carolina – 22 days before Hurricane Matthew hit. The record storm surge did incredible damage in the area. Some marinas were completely destroyed. Moore’s marina survived but with extensive damage to two piers, including the fuel dock, which also served as a wave attenuator for the marina.

Moore bought Skull Creek Marina, in part because he was looking for an expansion opportunity, and the property was already permitted for another 70 slips. Moore had also been through numerous hurricanes as a marina operator. “I’ve had some minor damage, but nothing compared to what occurred after Hurricane Matthew,” he said.

Record Storm Surge
Moore said some marinas in the area were destroyed because the piles weren’t high enough to accommodate the record-high storm surge. The original docks at Skull Creek Marina, built in 1987, were tall enough for the approximately 9-foot storm surge, but six concrete piling broke off at the mudline. The fuel dock, at the north side of the marina, served as a breakwater for the marina, and it took the brunt of Hurricane Matthew.

“With that record tidal surge, you have the docks way at the top of the piling. It’s a tremendous amount of leverage,” Moore said. “Once that broke, the whole dock came apart.” Once the fuel dock was gone, that left the next pier to the south fully exposed. It stayed together, but took heavy damage.

Construction on the repairs would start about only 10 months later, with new docks on-site before that. Moore said the insurance and rebuilding process went smoothly, thanks in large part to marine surveyor, James Smith of Marine Specialties. Moore was insured with Chubb Marine Insurance, whose adjusters make the final decisions about repairs and prices, based on the inspections done by the surveyor in the field. Smith’s knowledge and experience in the field and his rapport with the adjuster were key in the process, Moore said.

In the end, total repairs cost $3.1 million, including a $350,000 deductible for the marina. Within 90 days of the storm, Moore received his first insurance advance, which allowed the marina to start temporary repairs. Staff on-site began repairing broken water lines and doing other minor clean-up and repairs. The marina hired Alpha Construction of Savannah, Georgia, to do some temporary repairs before the new docks arrived, and permanent repairs on the two-thirds of the marina that wasn’t destroyed. The contractor restored temporary power to the pier that was damaged but not totaled. The dock would eventually be replaced, but in the interim, it was partially usable.

The 12-foot wide fuel dock is exposed to the north and will continue to act as a breakwater for the rest of the marina.

“Skull Creek Marina is fairly open and exposed, so it needed a strong system,” Moore said.

At the water, Skull Creek Marina’s 30-ton travelift picked up the docks and put them in the water, including the 5-foot wide finger piers, 35 to 40 feet long.
The internal pile guides were built onto the docks at the manufacturing facility, and external piles guides were shipped separately and bolted to the docks on-site. The Industrial Company (TIC) was the contractor on-site doing the dock and pile installation.

For lower maintenance, the dock pile guides include UHMW (ultra high molecular weight polyethlene) wear pads, as opposed to rollers. The wear pads are less maintenance because the rollers have many moving parts, which wear out, Berry said. The pads also do two things: they’re tough, with nothing moving on the concrete piles; and the wear pad puts a greater surface area on the pile. “It’s better for a rough environment. The load is spread over a larger area,” Berry said.

BIG Future Plans
Skull Creek Marina primarily serves boats 35 to 80 feet, with some side-tie dockage for larger boats and a 50/50 mix of powerboats and sailboats. The majority of boaters are long-term annual slipholders, with about 20 percent transient business. The marina has limited liveaboards, about a half dozen, allowed by its permit.

By the end of the year, Skull Creek Marina will begin work on 3,340 linear feet of additional side-tie dockage, at the north end by the fuel dock. The marina received Boating Infrastructure Grant (BIG) funding for the project. The total project is $4 million. Moore received $1,283,749 in BIG funding, which requires a transient dockage element in the new project.

The new docks will be able to accommodate vessels of any size with flexible side-tie dockage, larger power capabilities and in-slip pumpout. Marintek designed the new fuel dock with this expansion project in mind, and the new docks will connect easily. Construction on the project will begin by the end of the year.