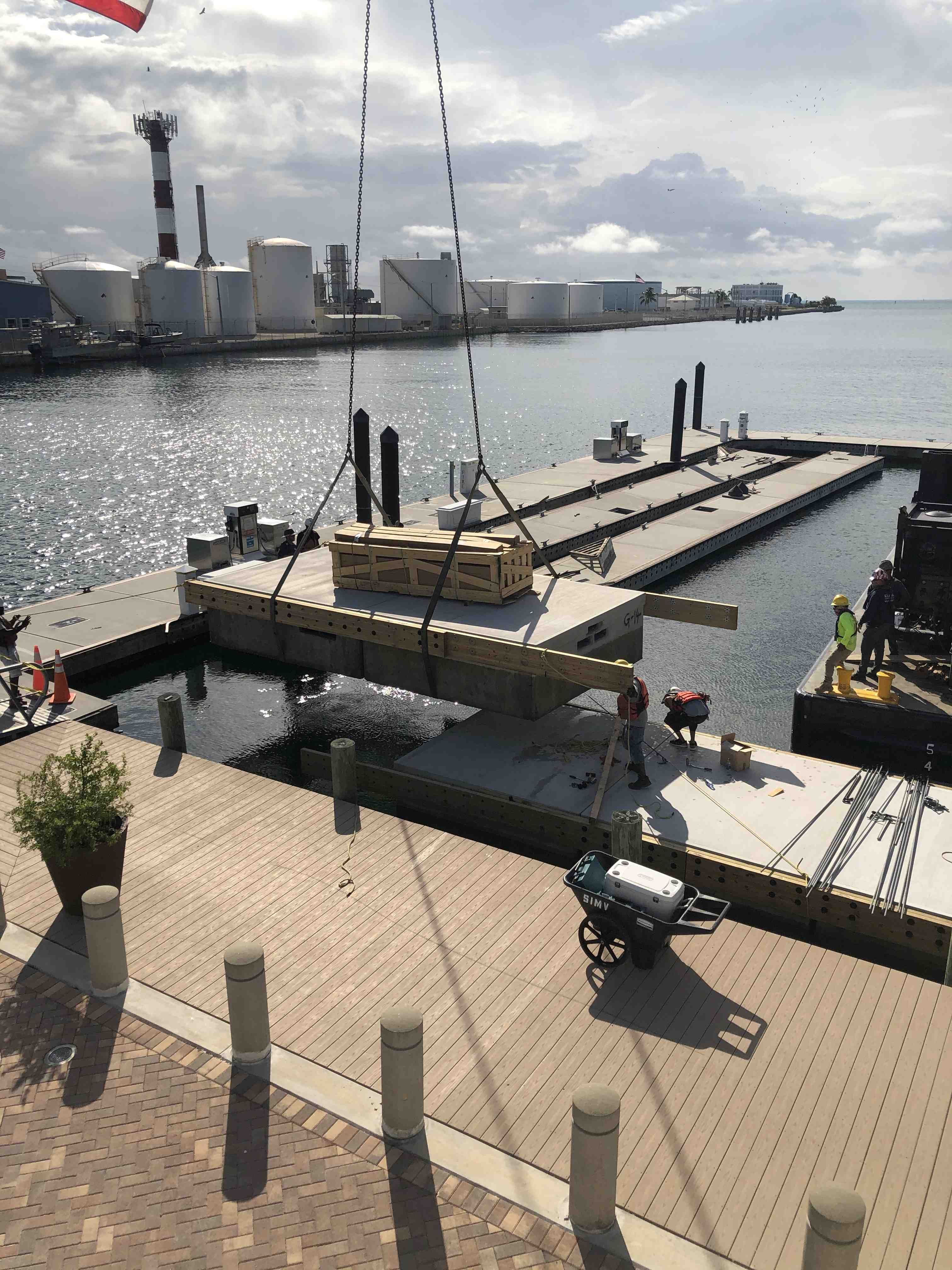 Located at the former site of the commercial fishing harbor for the Lower Keys, the Stock Island Marina Village facility opened in 2015 with 120 slips ranging from 40 feet to 250 feet. With the continuing development of the onshore area (hotel, artisan center, rum factory and more), demand for these slips has been high, and the marina has consistently sold out. Now Stock Island Marina Village is set to meet those demands with the Phase II expansion that provides it with the ability to accommodate boats up to 450 feet long.

Stock Island Marina Village is located on Stock Island, which is adjacent to Key West and includes three basins – north, center and south – divided by two peninsulas. During Phase I, Bellingham Marine built the slips in the north basin.
During Phase II, the marina added a dozen 60-foot slips and a side-tie area in the center basin, as well as two 400-foot-long side-tie docks in the south basin. “With their market research and from actual use, the marina found that there was a good demand for larger slips,” said Steve Ryder manager, Bellingham Marine’s senior project development manager for the Southeast region.

Work began on-site in October 2019, with the demolition of old fixed piers in the central and south basins. The new layout for Phase 2 required reconfiguration of the float modules in the central basin, which was easy to accomplish with the existing modular Unifloat® dock system. The Bellingham team removed and reused some of the existing steel pipe piling and HDPE sleeves and installed an additional 39 high-strength-steel pipe piles protected with HDPE pipe pile sleeves. An additional 2,100 linear feet of floating concrete docks that provide 24 inches of freeboard were installed.

In the central basin, the existing megayacht side-tie dock was expanded by 1,000 linear feet, using 12-foot wide Unifloats. The south basin includes 300 linear feet of that same width, as well as two 400-foot fingers measuring 10 feet in width. Due to the size of these main walks, the sub-assembled main walkways received a 500-mile escort, while traveling along the highway from Jacksonville to Key West. They were then offloaded with a 120-ton travel lift from the adjacent shipyard, Robbie’s Full Service Marine.

On the utility side, the marina expanded the existing fire protection standpipe system to 15 locations, continued the sewer pumpout system to all docks at each slip and added additional potable water hookup to pedestals.

The electrical system upgrades substantially increased the marina’s electrical capacity, enabling it to service the larger yachts. “One of the most time-consuming parts of the planning was the coordination of the electrical system for this phase and for future phases,” Ryder said. The marina wanted to have enough power for the site to be able to complete Phase II additions, and also accommodate other slips it might be adding in future phases.