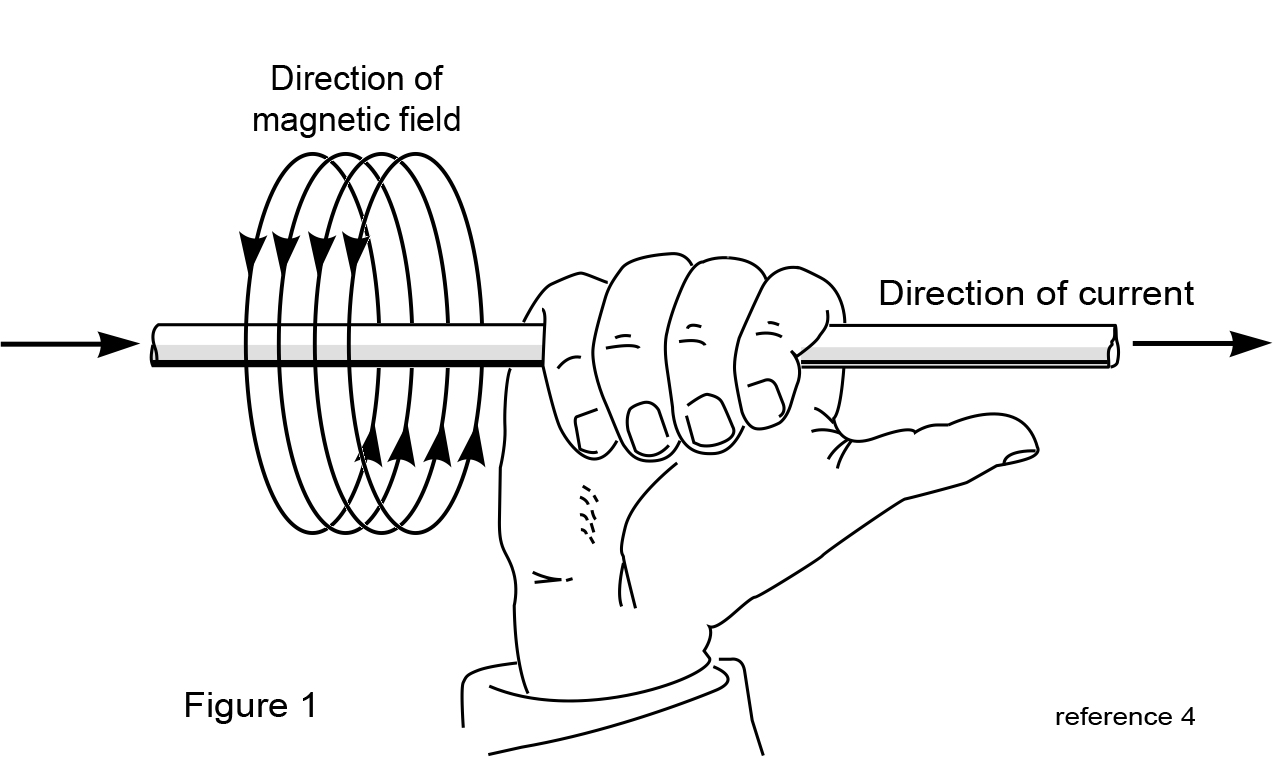 Editor’s Note: Gary Loftis of Maffett Loftis Engineering, LLC, is professional electrical engineer and a certified deputy electrical inspector with the State of Tennessee. He is a member of the International Association of Electrical Inspectors (IAEI) and has served as president of the Tennessee chapter, and is a member of the National Fire Protection Association (NFPA). Loftis is foremost concerned about marina safety and uses his knowledge and experience of marina electrical systems to ensure that electrical code requirements are effective, practical and economically feasible. With his vast experience in the field and the rise of electric shock drowning incidents, he gets many questions about how to measure current and how to detect leakage. In order to measure leakage current properly, marinas need an understanding of the basic principles of electricity. In today’s marina industry, many terms (such as GFCI, GFP, 100 milliamp (mA), 30 mA, ground faults, leakage current, etc.) are being thrown around without much understanding. In this article, Loftis will help shed light on this often misunderstood topic, explaining the basics behind leakage current and tips for effectively measuring it.

Technical papers and standards referenced in this bulletin are (1.) the 2017 NFPA 70 (National Electrical Code – NEC); (2.) US Coast Guard report, “In-Water Shock Hazard Mitigation;” (3.) ABYC E-11 “AC and DC Electrical Systems on Boats”, July 2015; and (4.) The Open University, PPLATO @ University of Reading, PHYS 4.2 Introducing Magnetism. Portions of these reference documents are directly quoted and/or graphics are used within this technical bulletin, as noted on each image.

Measuring AC Current
Figure 2 represents a vessel’s shore power cord which is connected to a shore power receptacle rated at 120-volt 30-amp. In this example below, the vessel is pulling a 10-amp load. The black (hot) conductor is supplying 10 amps, while the white (neutral) is returning 10-amps back to the receptacle.

When a clamp-on meter is clamped around both the black and white wires (refer to Figure 5), the meter will detect the difference in the magnetic fields. This is due to the difference in current flow between the two wires.
In Figure 5, the vessel has 100 mA of leakage current. The definition of leakage current is the current in the return wire (i.e. white or neutral wire) being less than the current in the source (i.e. black or hot) wire.

The ground wire should never carry current in normal operation of the electrical system. As shown in this example, if a clamp-on meter is used to clamp on the entire shore power cord, the meter would display zero current because the magnetic field is balanced. In most cases, this scenario of leakage current is a neutral-to-ground connection inside the vessel.

The second scenario of leakage current is illustrated in Figure 7. This scenario typically is more hazardous than the first because the leakage is not contained within the shore power cord but is traveling through another path. The path of leakage current is generally in the environment, (mostly the surrounding water, in the case of marinas). Other path flows could be the metal frame of the dock or communication lines such as telephone or cable TV.

When one takes a reading of leakage current, it is like taking a picture at a specific moment in time; after a brief moment in time, the scene changes. This is also true of the photo of the 100 mA reading. As soon as the meter is removed from the shore power cord, the leakage current can change. This is largely due to electrical equipment inside the vessel. For instance, the reading might be lower when the air conditioner is not running and higher when it is running. The same goes for all other pieces of equipment in the vessel.

Leakage current is sometimes caused by a high resistance short or a dead short. This scenario would be illustrated as when the black (hot) wire accidently comes into contact with a grounded object. This is called a ground fault. The next section covers ground faults in more detail and explains different levels of ground faults and their hazards to the human body.
The leakage current measurement principle also works identically for a 240-volt 50-amp shore power electrical system.

Ground Faults
A ground fault is defined in the National Electrical Code (NEC) as “an unintentional, electrically conductive connection between an ungrounded conductor of an electrical circuit and the normally non-current-carrying conductors, metallic enclosures, metallic raceways, metallic equipment or earth.”

Such involved and wordy definitions aid in most people having a hard time understanding electrical codes. This definition simply states that the black (hot) wire is leaking current to the grounding system. The grounding system includes the green (ground) wire and everything connected to it such as the aluminum vessel hull or metal structure of the dock.

The second line in the current thresholds table (i.e. 4 – 6 mA) is the amount of leakage current that is required for the tripping level of a Ground Fault Circuit Interrupter (GFCI) device. This GFCI device is the most common trip level that most everyone has experience with. A GFCI device is commonly found as a receptacle in your bathroom and kitchen with test and reset buttons on the front of the receptacle. A GFCI receptacle will trip power to the receptacle if there is an imbalance of current on the black (hot) and white (neutral) wires somewhere between 4 to 6 mA.

Any ground fault device that trips power when leakage current is greater than 6 mA is considered a Ground Fault Protection for Equipment (GFPE) device. However, in the NEC Article for marina codes (i.e. Article 555), the “E” is dropped and refers to these devices as Ground Fault Protection (GFP). Therefore, the 2017 NEC – Article 555.3 refers to a GFP device as a device with a leakage current trip level of 30 mA. Based on the information above, one should now understand this means there is a difference in current level between the black (hot) wire and the white (neutral) wire of 30 mA.

In all of the leakage current examples above, there is a 100 mA imbalance of current between the black and white wires. For reference, the previous 2011 and 2014 NEC Editions required a 100 mA GFP on marinas.

Correct Clamp-On Amp Meter Selection
There are many clamp-on amp meters on the market. However, most are not suitable to be used as an AC leakage current meter. Going to a local electrical supply store and purchasing an off-the-shelf clamp-on meter generally is not the meter of choice. 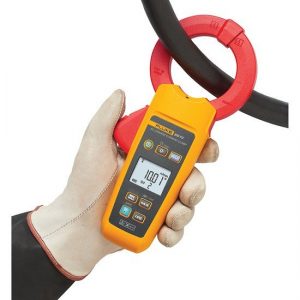 Following is a list of meters that will measure in the low (or lower) mA range:

The only clamp-on meter listed above that will allow the measurement of multiple 50-amp 240-volt shore power cords at one time is the Fluke 369 as it has a 60 mm clamp diameter. This clamp-on will also clamp around a 100-amp shore power cord. This function is useful if a marina has several vessels that have these larger power requirements.

Recommendations on Acceptable Leakage Current
As stated before, all electrical systems have leakage current. The important question to ask is “How much is too much?” Many experts in the electrical field will tell you that any leakage current more than 6 mA is dangerous, and this would be correct. If you refer back to the “Current Thresholds for Humans” chart on this page, muscle contractions can occur with as little as 10 mA. Muscle contractions while swimming can cause drowning. 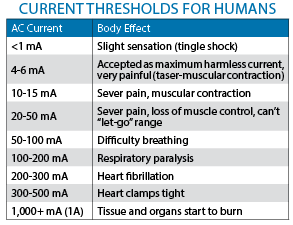 There have been studies conducted to determine the amount of acceptable leakage current for a vessel while plugged in to shore power. The recommendation from the 2008 US Coast Guard report “In-Water Shock Hazard Mitigation” stated: “If AC leakage current is kept to less than 100 milliamps, a dangerous condition should not result around boats connected to the shore power system.”

Many in the code standards panels felt the 100 mA GFP requirement was not enough protection for vessels. Therefore, the American Boat and Yacht Council (ABYC) added a ground fault trip requirement to its E-11 Standard “AC and DC Electrical Systems on Boats” in the 2012 Edition. The following is taken from the ABYC E-11 Standard of July 2015: “11.11.1.1 – The trip level {of the GFP} shall be a maximum of 30mA. The trip time shall be a maximum of 100ms.”

Also, the latest 2017 Edition of the NEC has reduced the GFP requirement from the previous editions. Article 555.3 of the 2017 NEC states:
“The overcurrent protective devices that supply the marina, boatyards, and commercial and noncommercial docking facilities shall have ground-fault protection not exceeding 30 mA.”

Furthermore, the 2008 U.S. Coast Guard report “In-Water Shock Hazard Mitigation” states: “30ma will result in 0.11V/foot. At these low current and voltage gradient levels…there should be no danger to anyone who may be in the water around a boat.”

By no means is this an invitation or otherwise a reason to grant permission to enter the water in a marina, even if the marina is equipped with a 30 mA GFP. Instead, what is being said is that a 30mA GFP should provide enough protection for a person if they accidently fall into the water at a marina.

Less than 30 mA of leakage current for a single vessel is within the acceptable range of safety standards.

Conclusion and Recommendations
The following is a list of recommendations and requirements for consideration:
• Only qualified electrical personnel should perform electrical work on marinas and vessels (including, but not limited to, the measuring of leakage current).
• The proper understanding of how leakage current behaves is a requirement for anyone that desires to measure leakage current.
• Install GFP on a marina’s electrical system per the NEC standards.
• If a marina doesn’t have a GFP system installed, a routine should be started to measure for leakage current. Maintain a written log of the leakage current values for each vessel.
• Per the NEC and ABYC standards noted in this article, a single vessel leaking 30 mA or more is not an acceptable amount of leakage current.
• The most accurate means to measure leakage current is clamping around the hot and neutral conductors (see Figure 5). This can be performed by a qualified person within the shore power pedestal or by using an adaptor that has the individual insulated conductors exposed.

Gary Loftis of Maffett Loftis Engineering, LLC, is registered professional electrical engineer with more than 30 years of experience. For more about the technical bulletin, contact him at gary@maffett-loftis.com.