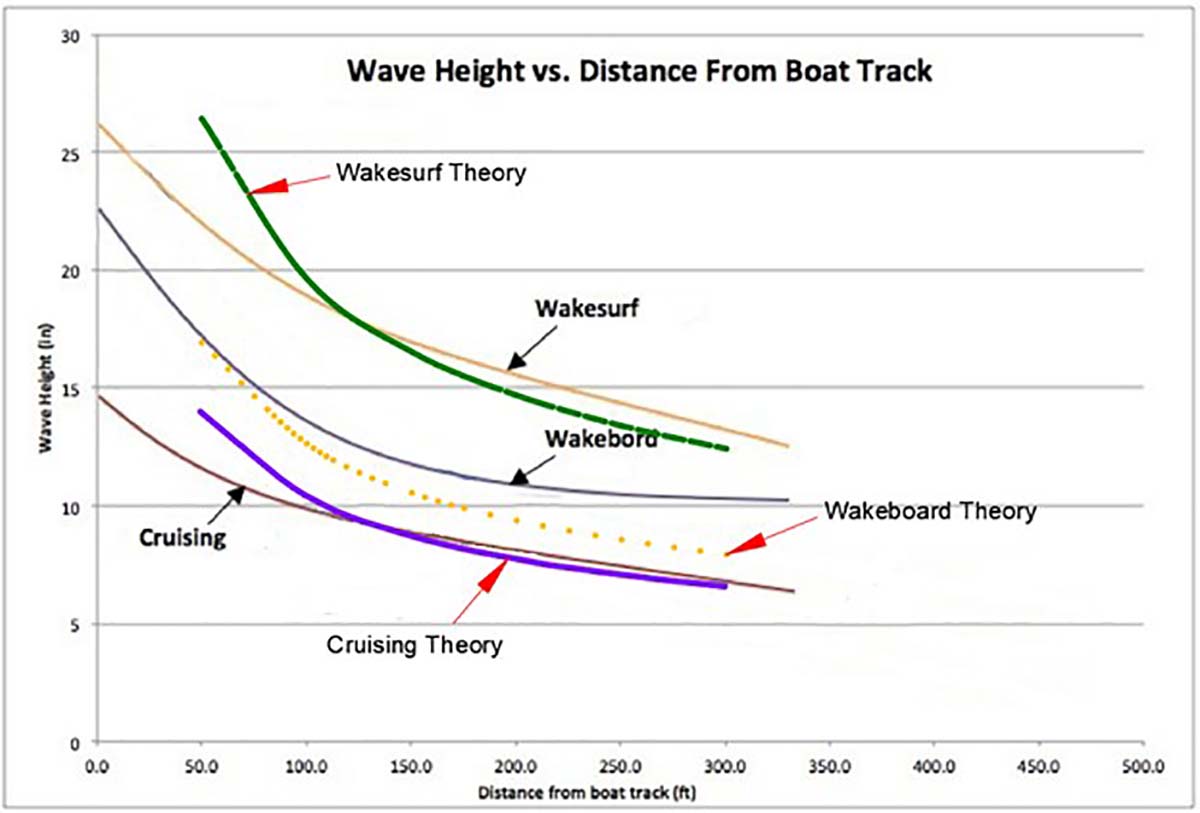 Tempest In Your Teapot

Marinas are our teapots. We don’t want to spill or spoil our personal recipe for offering the best tea. So when we think about protecting our teapots, we naturally think about those nasty wind generated storm waves. However, in many cases, storm waves may not be the only risk that need design considerations. In fact, they may not even be the worst wave conditions that can occur. There are other things that can stir up our teapot. Waves generated in the wake of passing vessels can also cause significant agitation within a marina basin, and can happen daily, even hourly. If overlooked, this poses a significant added risk, and maybe a flaw in the design since we always just assume that our worst case is an extreme storm that maybe happens only once in a while, and maybe even comes from a different direction than those boat wakes. The danger comes when we forget to look at what is happening right in front of us. The safest marinas are those that provide protection not only from storms, but also from the high wave energies present on bright sunny days.

There have been many studies on the formation of vessel wakes. While these theories differ in the specifics of calculating wave height, they are rooted in the same physics for the generation of the waves. As shown in Figure 1, as a

vessel advances through the water, it generates two wave forms: a transverse wave and a diverging wave. The transverse wave follows the vessel directly and in the same direction as the vessel movement while the diverging wave propagates at an angle nominally 35° from the vessel track (Sorenson). The diverging wave train is the portion of wake that approaches the shoreline and is the predominant cause for concern for a marina. There are a finite number of waves in a boat wake wave train, usually about 12 or so, and while they do gradually dissipate as they move away from the vessel, they can travel hundreds of feet away before fully dissipating (Sorenson). What is worse, those wakes arrive at the marina after the boat has passed – too late for the boater to realize what has happened and do anything about it.

Combating Vessel Wakes
In an attempt to reduce this problem, many marinas seek to establish no wake zones within a specified distance. These restrictions are often supported by local legislation, such as the 100-foot clearance established by the Wisconsin State Legislature for boats passing by docks, piers, rafts, or buoy restricted areas on lakes (Wisconsin State Legislature). Although helpful, this practice still allows for some risk, as out on the water, boat operators cannot easily judge the actual distance from shore, and different vessels will generate different wakes.

There have been multiple theories developed to estimate properties of a boat wake (Sorenson), and not surprisingly they yield different results. These theories all try to predict the size of a boat wake as a function of vessel hull geometry, the vessel speed (V), and the distance from the vessel’s sailing line (X). The United States Army Corps of Engineers (USACE) provides a Vessel Wake Prediction Tool that allows for an initial exploratory assessment of vessel wakes (Hartman). With inputs including vessel geometry, vessel speed, and lakebed geometry, the user can approximate the wake wave height using multiple theories and directly compare the results. For simplicity, the estimation of the boat wake is based on an assumption of a displacement hull, i.e. not a planing hull such as a speed boat which essentially skims over the water surface once it gets enough speed. That is a more complicated analysis not to be considered here.

While no one theory seems to work for every case, the theory offered by Gates and Herbich generally produces the most realistic predictions and is used for this discussion. Figure 2 illustrates the variation in wake wave height in relation to distance from the vessel and vessel speed – based on Gates and Herbich theory. It is evident that proximity to the boat and an increase in velocity both contribute to larger wave heights. Additionally, the speed and period of the wave are directly dependent on vessel speed. In accord with wave theory, as vessel velocity increases, so too do wave celerity and period.

As the boat advances through the water, it forms a wave. The speed of advance for this wave, the wave celerity, is directly related to the speed of advance for the boat. In general, the wave period falls in the range of two to four seconds. Figure 3 details the relationships between vessel speed, and the produced boat wake wavelength and wave period. For such short periods, these waves are termed “deep water waves,” as they experience no effects of bottom friction along the lakebed. Therefore, the direction and shape of the wave remain relatively constant and only the height reduces. What does this tell us? If we consider the case of an 80 ft Viking yacht travelling at 12 kts, the waves that hit the shore 200 ft away have the same damaging energy as a wave produced by a 52-mph wind blowing over a 2.5-mile fetch. However, unlike wind generated waves, wake waves are not dependent on fetch distance. Even very small lakes can suffer large boat wake agitation disproportionate to the fetch of the lake.

Figure 3 also reveals that there is a direct, essentially linear relationship between the speed of the boat and the period of the wave that it produces. This becomes important when we start thinking about how we best protect our marina from these waves. Fortunately, the wave periods of the boat wakes tend to fall in the range of periods for which floating wave attenuators can efficiently perform. The critical step then is to determine the size, length, and orientation of the attenuator to protect a marina from boat wakes.

Criteria for Harbor Tranquility
Ultimately, what matters is how the boat wakes affect the tranquility of a marina. The American Society of Civil Engineers, in their manual “Planning and Design Guidelines for Small Craft Harbors”, establishes criteria for harbor tranquility, detailed in Table 1. These criteria establish allowable wave heights within a marina basin dependent upon the impact angle relative to berthed vessels, occurrence frequency, and the desired level of tranquility (American Society of Civil Engineers). Unlike storm induced wind waves which occur less frequently, the boat wakes are likely chronic and frequent, therefore the recommendation for weekly tranquility goals are the controlling condition. These are most stringent given that the boat wake may be as large as the infrequent storm wave event. Our goal is to essentially achieve a wave climate inside our marina of a half foot or less when subjected to boat wakes.

Recently appearing on the scene is a new form of boat wake, produced by

large wakes for surfing. Wakeboarding boats can adjust their ballast and generate varied types of waves that have different properties for wakeboarders (Goudey and Girod). Figure 4, cited and adapted from the Water Sports Industry Association’s Characterization of Wake-Sport Wakes, offers a comparison of measured wake boat wave values as a function of the distance from the boat for different boating conditions as compared to simple cruising in the same watercraft.

The comparison, generated with the prediction tool provided by USACE, validates that the anticipated wake attenuation over distance from theory correlates well with actual observed conditions for small wake sport vessels. The theory depicted was developed by Maynord specifically for smaller recreational vessels (Sorenson). It is evident that predictions are reasonable for cruising and sport conditions, so long as the variable ballast of the vessel is accounted for. Figure 4 also illustrates that, regardless of distance, a wake sport vessel can generate a wave twice the anticipated size for its cruising condition. 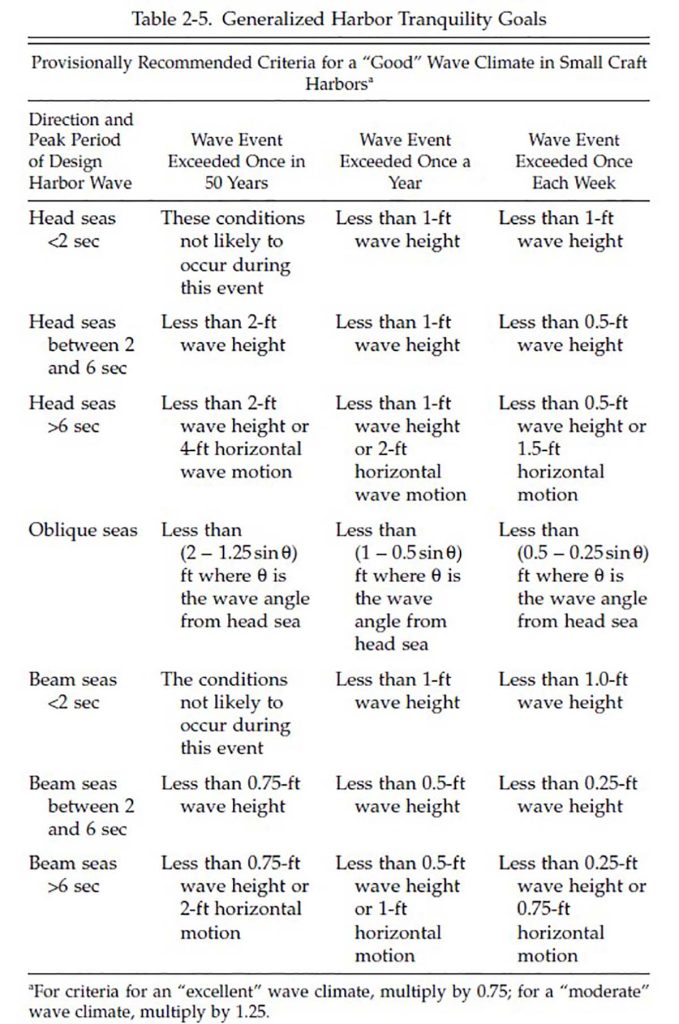 For marina owners, what matters is that boat wakes can be as much of an issue as a major storm related wave event. It is paramount that a marina is planned considering ALL the different sources of possible damage and agitation so that appropriate wave protection is provided for tenants. Marina owners don’t want to suffer a tempest in their teapot.