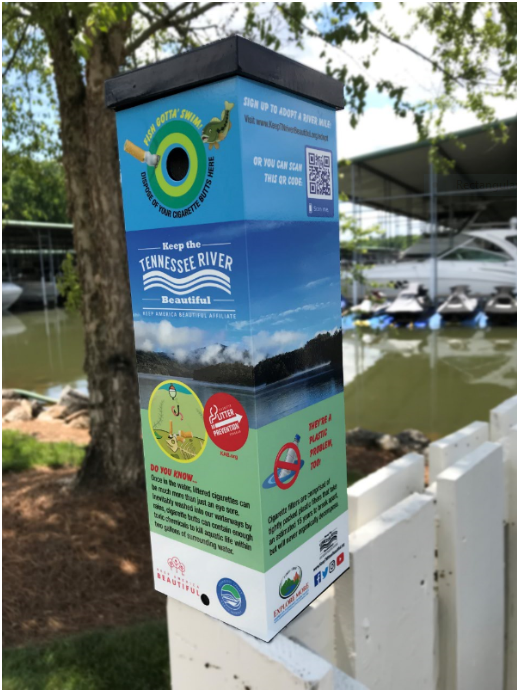 Tennessee Group Tackles the Issue of Cigarette Butts at Marinas

Cigarette butts are a pervasive problem at marinas, but a new program is helping facilities along the Tennessee River keep the butts out of the water.

With that knowledge the executive director of Keep the Tennessee River Beautiful (KTNRB), Kathleen Gibi, decided it was time to tackle the issue of dropped cigarette butts. They often find their way to area waters and are a prime contributor of microplastics, which are found in their filters. Through Keep America Beautiful, Gibi could provide free cigarette disposal receptacles, which became the spark that lit a 5-state movement to keep marinas stocked in these receptacles. Keep America Beautiful is a national non-profit that through national programs and initiatives works to end littering, improve recycling and beautify communities across America.

Gibi happened to talk to Melinda Watson who previously managed the Tennessee Valley Authority’s (TVA) Tennessee Clean Marina Program and is now program manager for the TVA’s Partnerships and Strategic Planning. Gibi shared that she had the receptacles but wasn’t sure how to spread the word and get them placed. Part of the workplan for TVA is marina education and outreach, so Watson knew from years of visiting marinas that their parking lots and shorelines were often littered with butts. Marinas seemed a good place to distribute the receptacles and with Watson’s history of working with them, she was able to reach out and get marinas onboard with installing the units.

The Program Takes Off
Within days, 24 marinas had signed on to take the receptacles.
But it wasn’t just the marinas that embraced the idea. To further the education regarding the damaging effects of cigarette waste, TVA provided funding and the Tennessee Department of Transportation provided a special litter grant to have the receptacles wrapped with educational art.

“I had seen art wraps for a history project in Knoxville, and I thought KTNRB could pay to have those done since the receptacles were free. They’d be pretty but would also build awareness of the problems with cigarettes. Our goal isn’t to shame smokers but to shame the littering and help people understand what happens to a butt thrown on the ground,” Gibi said.

Keep Tennessee Beautiful contributed funds to have the receptacles delivered to the participating marinas in Tennessee.

According to Gibi the response from marinas has been overwhelming. She anticipates an additional 300 receptacles will be installed with help from a $5,000 Cigarette Litter Prevention Program from Keep America Beautiful.
The Jackson County Park Marina in Scottsboro, Alabama, was one of the first marinas to order the receptacles. Within just one week of installation, manager Carl Barns said they are already being used. “I’ve had several people say they liked them. We ordered them to try to keep butts off the ground and from going into the water. We want to have a clean site.” The receptacles are scattered around the property, which accommodates boat slips, a boat ramp, boat rentals and sites for camping as well as cabin rentals.

While Keep America Beautiful will keep providing the free receptacles as long as supplies last, the art wrap takes money, and the art is one of the reasons marinas want the receptacles.

“Now that people see what they look like, marina owners keep following up asking how to get them and then when they will arrive. At first they thought it would just be boxes with some facts and not as pretty as they are. The graphic designer who is making them used to do graphic design for HGTV so the boxes are really nice and people are pleasantly surprised,” Gibi said.

Butt Recycling
While the cigarettes are being collected instead of tossed on the ground, there was still the issue of them landing in landfills and contributing to the overall trash problem. However, along with receiving receptacles, participating marinas can ship the waste to TerraCycle, a New Jersey-based company that recycles hard-to-recycle materials. TerraCycle partnered with Keep America Beautiful in a nationwide effort to recycle plastic cigarette filters. The company not only does the recycling but Keep America Beautiful provides the shipping packaging and TerraCycle covers the shipping costs.

“We all know that there’s a lot of urgent need to care for our waterways. It’s important to alarm the public to urgent needs but not right to do so without offering solutions. So that’s what we’re working to do. Inspire everyone to care for the river and understand how deeply rooted we are in the water,” Gibi said. Gibi said the river generates $12 billion in economic impact from recreational use alone and provides more impact from the power it generates from dams and from industry that transports products via barges.

The next phase will be to provide the receptacles for boat ramps. Gibi said she thinks the group can produce just 24 units because these units must be larger, standing at 4 feet tall, to accommodate more users. The other factor to consider with the ramps is that there isn’t staff on-site to empty the butts, but Gibi said she’s already been approached by a Power Squadron member who wants to line up volunteers to empty receptacles at boat ramps.

Marinas located within the Tennessee River watershed can request the cigarette waste receptacles by visiting www.KeepTNRiverBeautiful.org/cigarettelitter.