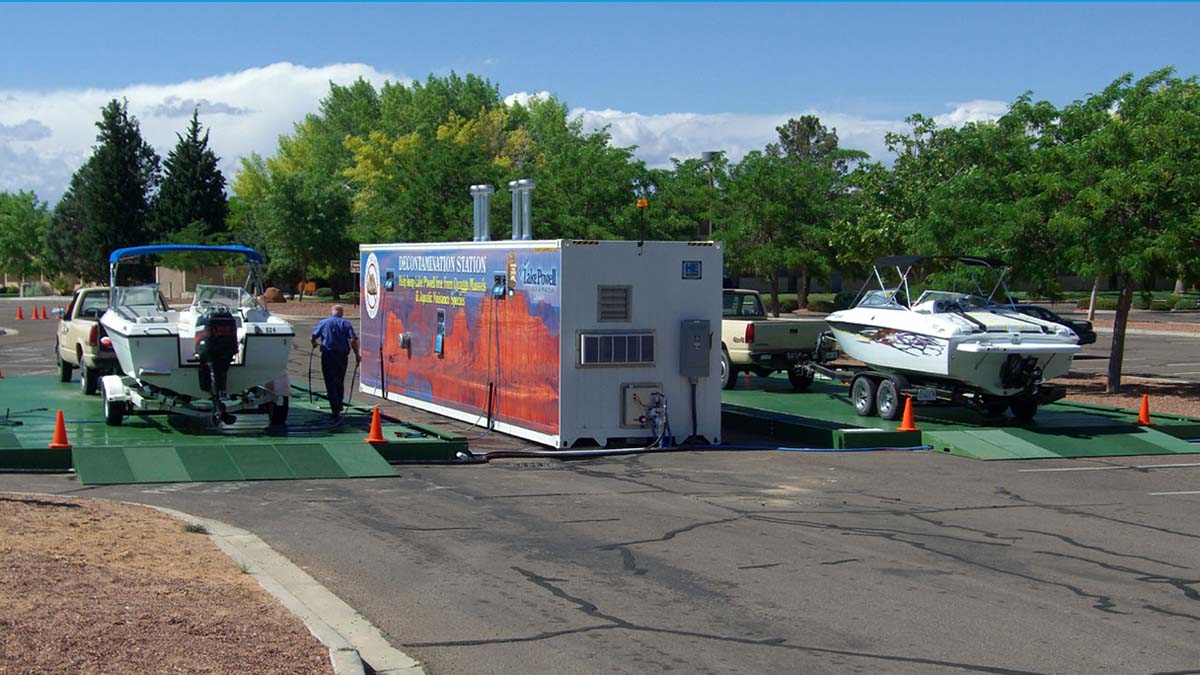 The Ins and Outs of Power Washing and Process Water

For most full and partial service facilities, and increasingly at many boat ramps, cleaning the hulls of boats is a normal and necessary activity to remove dirt and marine/aquatic growth, whether that growth is simply unwanted or potentially harboring an invasive species like zebra or quagga mussels. And most often these days, the cleaning involves some form of power/pressure washing, with or without some form of detergent or biocide mixed in. During the washing, we also end up removing some oil and grease or other chemicals, as well as loose paint. Many times we also use power washing to intentionally remove bottom paints.

We have all seen a boat that is being power washed after being hauled at the end of the season, and the power wash water turns the color of the hull’s bottom paint. I recall years ago a marina manager jokingly telling me that he only allowed boats with blue and green hulls to be hauled at his facility so he could help turn the harbor waters back to a nice blue-green color!

In fact, in the not-too-distant past, and to various extents still today (particularly depending on what part of the country/world you live in), most of us didn’t give too much thought as to where the water from this kind of boat washing was going. That started to change when the attention of the regulatory world started heading from the big smoking gun types of water pollution to “nonpoint source” and “stormwater associated with industrial activities.” Suddenly marina operations were industrial activities, even if most of us had a hard time thinking of this often-romanticized pursuit this way. I also recall an off-the-record conversation with the head of an unnamed

Northeastern state’s environmental protection agency, where, as we were discussing stormwater runoff, I asked “Well, what about the power washing water?” And he replied, “Don’t ask that question. We don’t really have a good way to permit it, and you won’t like the answer I’ll have to give you.”

Current Regulations
All these years later most places, at least in the U.S., still don’t have a good way to permit it, but it is officially recognized as “process water” (i.e., industrial process wastewater), and something that cannot be discharged either to surface or ground waters without a permit. Keep in mind that any water associated with wet sanding is also considered process water and similarly regulated.

In most cases in the U.S., the “bad” (or at least not preferred) way to permit these types of discharges would be to get a facility-specific individual industrial discharge permit, which most facilities consider far too burdensome an approach. So, what do we do?

There are many options a facility can take, from relatively inexpensive to very expensive. What makes the most sense for your facility will depend greatly on your specific operations as well as the associated regulatory and physical environments.

Do nothing. There are definitely facilities that have yet to really tackle the problem, and in many locales enforcement has been somewhat lacking. However, when an agency decides to conduct on-site inspections, the opening notice of fines can be, equal to or higher than the cost of compliance. In most cases, it is also in the facility’s best interest to minimize its potential negative impact on water quality and the environment.

Only conduct power washing in an area where one has covered the ground with filter fabric and/or surrounded the area with hay bales. This allows for the collection of the biggest debris and allows the water to flow directly into the ground or over the surface to the water. Years ago this was sometimes considered enough, and while better than nothing, in most cases would be hard to justify as compliant – not that use of filter fabrics can’t be part of a system or overall approach. Such largely untreated discharges can also lead to potential ground contamination issues.

Most other options will all entail having a wash pad of one form or another, which we’ll get to below, and involve eliminating any discharge of process water, thereby eliminating the need for a discharge permit.

For facilities that do not do much power washing, collecting the wash water from your pad, with or without some basic filtering, and directing it to a holding tank where it will be pumped out by a certified hauler for proper disposal, can be a solution. But for facilities with any kind of volume, this method may prove impractical and too expensive.

Pre-treatment and directed into a sanitary sewer system – sometimes referred to as an “open loop” system, can be an attractive set-up, particularly where a municipal or similar sewage treatment plant is at the end of that sanitary sewer line. There is normally a requirement to obtain permission for the discharge, and the pre-treatment requirements of the sewage treatment plant owner can vary tremendously, from simply having some basic filters (down to a reasonable micron level) and a settling tank of some sort, to the more advanced treatment methods that would be used in most any closed loop/recycling system. Even in the latter case, the overall level of treatment required is typically less than for a recycling system since the treatment is finished at the sewage treatment plant. Some plant owners require some level of periodic testing of the water you are sending their way. There is also the risk that the plant owner will change their mind at some point and either disallow the connection or increase the pre-treatment requirements.

A closed loop/recycling system can be similar to the “open loop” system, but it most always requires a higher level of treatment so as to sufficiently finish the water for further pressure washing use. Similar to the open loop system there will be filtration down to specified micron levels. Depending on the intensity of use and the particular climate, these systems will often also include continuous movement of the water within the loop to prevent stagnation and/or the addition of an ultraviolet or bromide system to prevent bacterial growth in the water and foul odors. Some systems use flocculation additives to encapsulate foreign materials, but in most cases, and where they can be afforded, recycling systems are considered the preferred and “greenest” means for dealing with power washing process water – particularly in places where fresh water is in scant supply or expensive to obtain.

There are many variations on a theme for these approaches, and the cost can range from relatively little to hundreds of thousands of dollars. The latter is usually for very intense activities and a very customized system. The actual treatment processes vary considerably, ranging from electro-coagulation to ceramic media, carbon filters, cyclonic separators, etc., and a host of mechanical filters. Each system can have its strengths and weaknesses. When talking with vendors be sure they understand your needs and whether you are in a salt or freshwater environment. Also get clear answers as to how you will be able to dispose of collected solid wastes, used filters, etc. There are quite a few suppliers out there these days, though most are geared towards the carwash, trucking, heavy industry and/or military markets, and relatively few that are focused on marinas, not that this means they can’t supply a marina.

Each company has it particular focus with pluses and minuses. Two US suppliers that are particularly marina focused are EMP Industries (makers of the AquaClean system) and The Next Generation in Waste Water Treatment Technology. There are several companies overseas that also cater to the marina industry.

More Than the System
As noted above, fundamental to any treatment system is having the means to collect the water. In most cases it is strongly recommended that the power washing be undertaken on a hard surface that is sloped to a catch basin where a sump pump can be placed to transfer the water to a tank or whatever treatment system is employed. For a new facility or one that is already redoing their mobile lift operation or launching ramp, that is a relatively simple approach to undertake. But it can be very expensive to redo or retrofit an existing hard surface pad. Not only does it have to be reinforced to withstand the weight of the mobile lift and boats that are being hauled or launched, but it also needs to be sloped in a manner to direct the water to the catch basin. In all cases there should also be an approach to separate the process water from stormwater when the process water is not being created, and ideally minimizing the amount of stormwater that runs onto or across the pad from other areas.

For facilities where creating these types of fixed pads is not possible, whether financially or practically, there are now specialty washdown racks and tarp-like pads available to create a contained system that is on/above ground. One vendor of such systems is Hydro Engineering Inc. (HE Inc) in Utah. While their focus for recreational boating has been on boat decontamination to prevent the spread of invasive species, they provide washdown and treatment systems for an extensive range of applications.

Dan Natchez is president of DANIEL S. NATCHEZ and ASSOCIATES Inc., a leading international environmental waterfront design consulting company specializing in the design of marinas and marina resorts throughout the world. He invites your comments and inquiries by phone at 914/698-5678, by WhatsApp at 914/381-1234, by email at dan.n@dsnainc.com or on the Web at www.dsnainc.com.