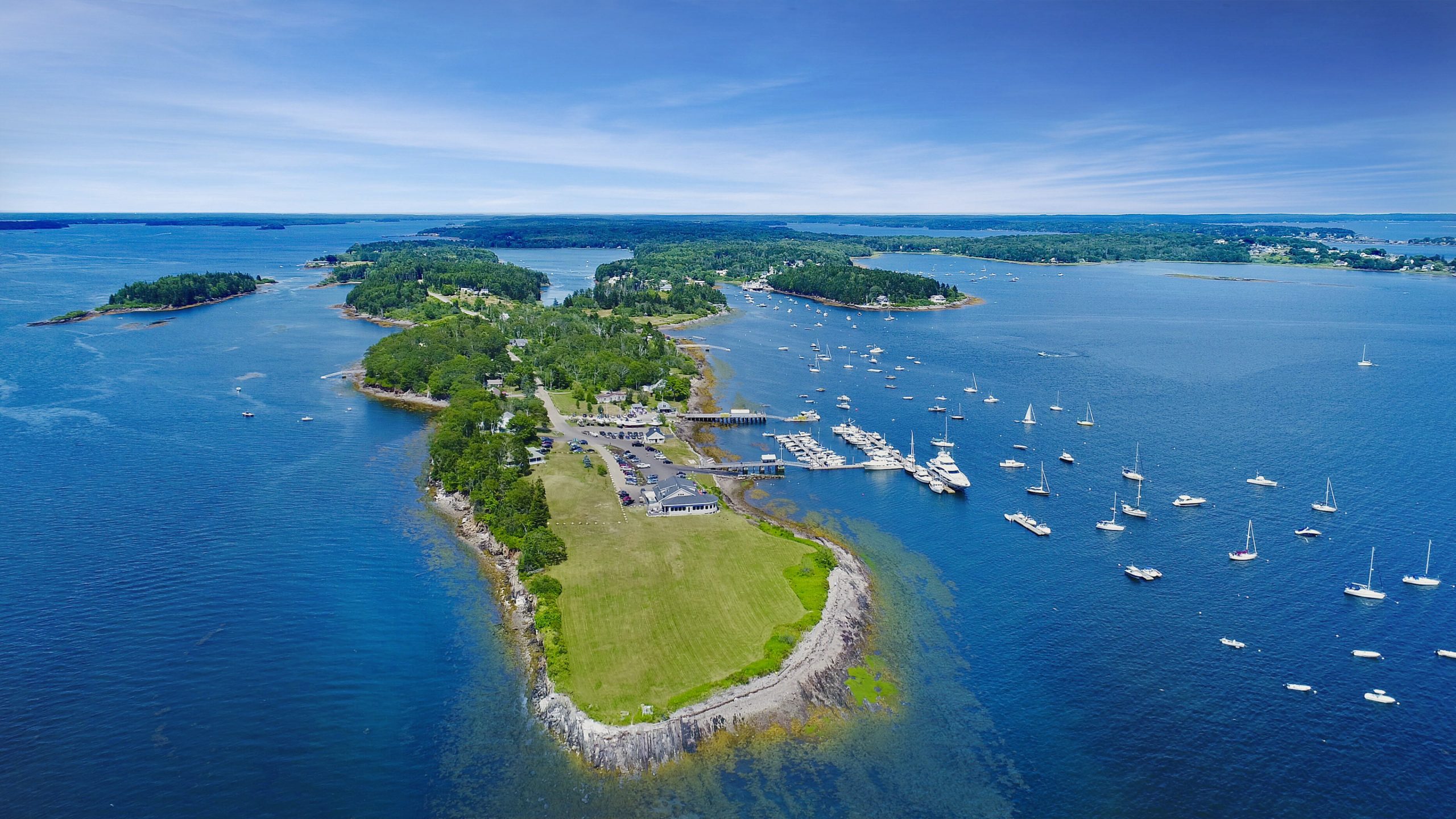 The Way Forward From Here: How the Dolphin Marina and Restaurant is adapting business practices in the COVID-19 era

It seems like such a small thing to build a table,” said Billy Saxton, whose family owns and operates The Dolphin Marina and Restaurant on Harpswell’s Basin Point. “But, it’s surprising how important a table can be.”

When the announcement came in mid-March that all restaurants in Maine would close their dine-in services in an effort to curb the spread of COVID-19, the Dolphin staff had already hauled all their 10 year-old floats out of the water and started to rebuild them for the season to come. “We had a lot of wood on hand from the old floats,” Chris Saxton said.

So, the brothers, along with their dock crew, got to work building more than 30 picnic tables and scattering them across their three-acre field and lawns surrounding the restaurant and marina.

“It lowers my stress level to do something physical to improve a difficult situation,” Billy explained. “As we built them, we started envisioning what it would look like to have people on this property in a different way. It felt good to take action with a purpose.”

Adapting to the Unknown
Like most owners of shuttered businesses, the Saxtons and their management team had been doing a lot of brainstorming. Some of it resulted in too much talk about things that they had no control over.

“Everything we were discussing up to that point had been theoretical. But years ago, on this same spot our grandparents basically did the same thing. They took what they had and provided a place for community,” said Chris.
Building the picnic tables became Chris and Billy’s first way forward, their “this can work” moment. Repurposed materials and a willingness to adapt to the unknown opened a door to the path ahead.

As Billy said, they needed a road map. While building the tables, they considered their options, listened to the daily-changing predictions and guidelines and conferred with others in the industry. They sunk screws into lumber and wondered, like everyone, are things forever changed?

“There were some dire predictions from people who know this industry well, people we trust and have relied on before,” said Chris. “Some were – and still are – saying that the days of dine-in restaurants are over. And we frequently hear of restaurants closing their doors for the season or forever as a result of all this.”

Amid the uncertainty, the Saxtons did two initial things aside from building tables. They decided to focus on the aspects of their situation that they could control, which helped them put a flexible plan in place that could evolve as conditions changed. Then, they reached out to their staff and guests as best they could to help implement and embellish the plan.

“We needed a clear vision of what we were faced with and how to move ahead. The people who work here are an important part of that vision,” Chris said. “We rely on our staff and everything they bring to the table. In order to be able to adapt to what we can’t control, we needed their buy-in.”

To get a sense of the big picture, imagine Basin Point at the turn of the twentieth century. A mostly-wooded 14-acre peninsula then, the family purchased the land to build a modest summer home.

Two generations later, Malcolm and Jean Saxton rebuilt the property’s fishing wharf, which had been destroyed in a hurricane. The new wharf became a marina. Jean added a coffee shop that eventually served hot meals. In 1966, The Dolphin Marina and Restaurant was incorporated.

“My grandparents decided to build a coffee shop and marina out here at the end of the world at a time when Harpswell wasn’t a destination like it is today. No one was driving 60mph down route 123 – it wasn’t even paved,” Chris said.

In 2011, the original restaurant moved into its current, larger building overlooking Casco Bay and the Calendar Islands. Improvements were made to the marina. Both projects incorporated environmentally friendly construction throughout. “The day we re-opened (in 2011), I was scared,” Chris said. “After all that work, all that investment, would anyone come?”

A New Normal
Nine years later, as the Dolphin crew stepped into their season offering take-out service only, he felt much the same. “Preparing and serving take-out is really different from what we designed this place to be. We had to change our approach,” Billy explained.

Throughout May, the Saxtons and their crew prepared food for take-out. Masked restaurant guests placed their orders one at a time just inside the front door, where they had set up a table complete with plexiglass barriers and a hand sanitizing station. “We started doing curbside and dockside to-go orders as well,” Chris said. “We delivered food to boats on slips and moorings as well as to our harbor float where we placed three picnic tables.”

In June, the Saxtons reopened the restaurant for limited dine-in service. They removed tables, spaced the remaining tables apart to abide by social distancing guidelines, and installed plexiglass dividers. “The Dolphin is lucky because we offer a number of different areas for guests to dine. We have three outdoor areas on our deck, patio or picnic tables on the lawn, in addition to inside dining. Our guests feel safe and they want to support us so we feel incredibly fortunate,” Chris said.

At the marina, they continued hauling and launching boats, where people could spend time on the water without crowding beaches. There are bright spots in all this creative adaptation, but the Saxtons also acknowledged the cost of doing business this way.

“I’m heartbroken about the amount of plastic we had to use in order to serve take-out food,” Chris said. He estimated that they purchased about 90 percent more paper and plastic products to safely provide take-out meals. They encouraged guests to reuse and recycle the to-go containers and cups.

“This ‘new norm’ is a step back,” he said. “One of our responsibilities as stewards of this place is to promote good environmental practices and set an example. As we pass this (business) on to future generations, the goal is to leave it better for them. More plastic and packaging isn’t helping achieve that.”

Aside from these operational concerns, the Saxtons have other, broader considerations in mind. “I worry every day about our local fishermen,” Billy said. “They work with such an incredible unknown. They make crazy investments in gear and supplies, put their lives on the line to do their jobs – to feed people – and they’re the ones taking the hardest hit here.”

The Saxtons also had to reevaluate what success would look like this year. Overall, they were well off of how they did last year and previous years, but said they are fortunate that they did as well as they did considering many in the hospitality industry are going out of business. “We credit our success this year to spreading out, creating areas where guests felt comfortable, sharing what our COVID-19 policies and safety measures were, and staying true to our brand while also being as adaptable as possible,” Chris said.

Through all of their planning and implementing new practices, Billy and Chris said the biggest piece missing was their mom, Mimi. Early in the season she wasn’t able to see her grandchildren or restaurant and marina guests and it was difficult for her. But by mid-July she felt comfortable helping in the restaurant on a limited basis. “This restaurant has been her life’s work. Everyone knows she’s the heart and soul of this place. People missed her and she missed being here,” Chris said.

Looking Ahead
Chris and Billy are now looking forward to 2021. “We are in survival mode,” Chris said. “With so many unknowns we are always focused on the present and thinking and planning for the future.”

“We want people to feel safe and comfortable being here,” Billy said. “Yes, on the outside, it’s a marina and a restaurant, but really those things are just tools to help people connect with the environment and with each other. People want and need those experiences now more than ever.”

The brothers do know one element that will be a part of their plan moving into a new season. “We used those picnic tables for the entire season and we will continue using them—they are a part of who we are now.”