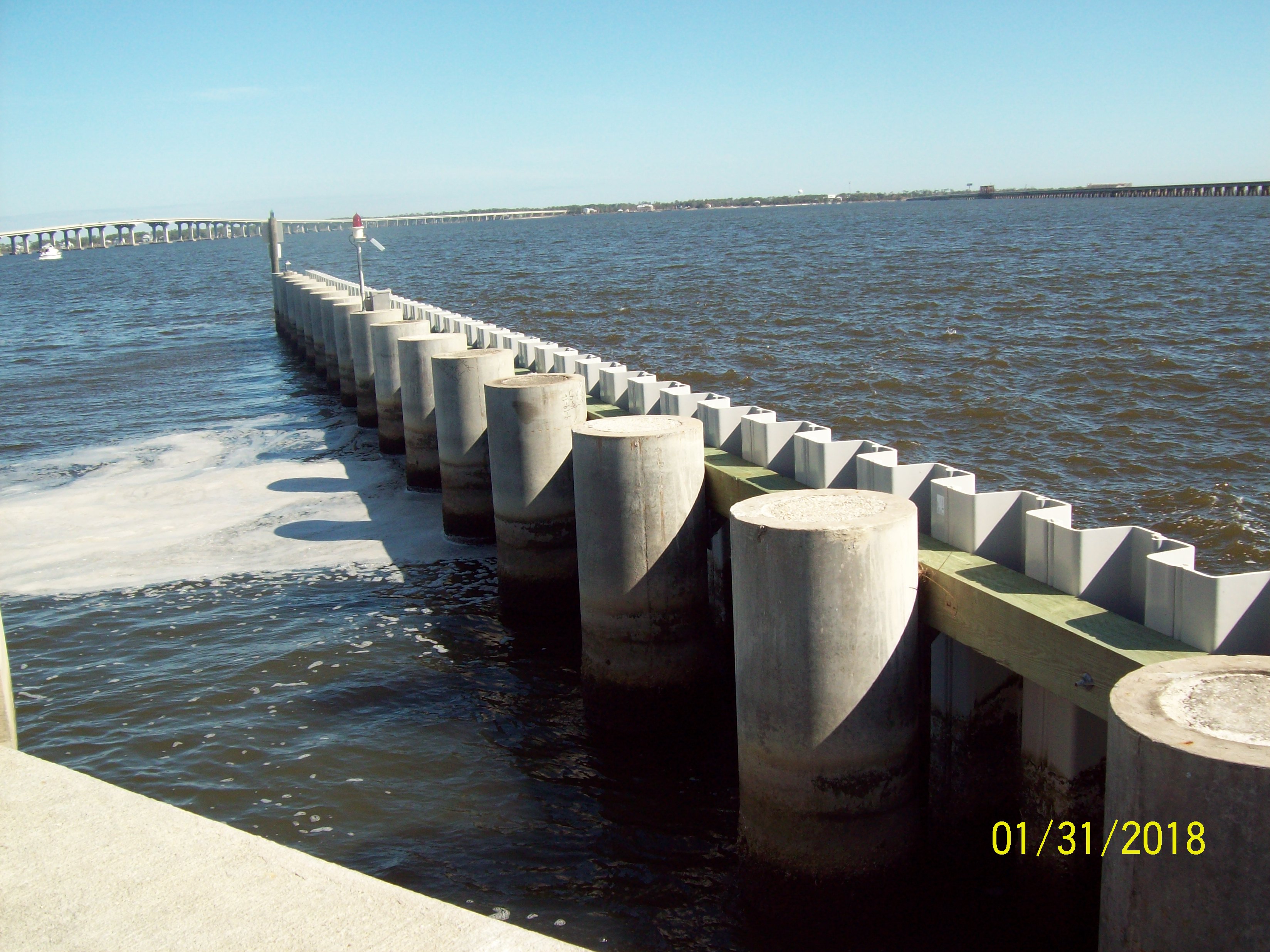 Wave Screens Protect Basins with a Long Fetch, Where Other Attenuators Fall Short

Catching waves can be good, out on the water wakeboarding or surfing, but too much wave action can be damaging for marinas and the boats moored at their docks.

Installing wave attenuators to block or reduce waves will help protect berthing areas and lessen damage from waves created by the wind or wake from boat traffic. Types of attenuators include fixed breakwaters, floating attenuators and wave screens.

“Wave screens are generally recommended as an alternative to either a fixed breakwater or a floating attenuator,” said Tim Mason, principal engineer for Applied Technology & Management (ATM). “They are widely used in places with a lot of boat wake activity.”

A fixed breakwater such as a rubble mound structure sits on the bottom and is very effective in protecting a basin, but it can be expensive to construct in deep water due to the volume of material needed. A fixed breakwater also requires a large footprint for the side slope and height above the bottom.
Floating attenuators are generally installed in locations where the design wave period is not larger than four seconds. Wave screens can provide protection from longer wave periods than a floating attenuator. “There isn’t a rule of thumb for limiting wave size, but generally we don’t see wave screens being used where design wave heights are larger than 6 feet,” Mason said. “They tend to be used in harbor/bay or inland type settings where there isn’t a direct impact from swells or waves with periods greater than 7 to 8 seconds.”

Unlike floating attenuators, wave screens and breakwaters are bottom-fixed structures. Screens are built on piles and are typically vertical structures with thin profiles. A fixed breakwater may be a trapezoidal-shape rock rubble mound or a caisson type, which is a large sheet pile or concrete block that sits on the bottom. Fixed breakwaters may result in unacceptable environmental impacts as sedimentation and circulation/flushing could be adversely affected.

Wave screens don’t require the footprint of a fixed breakwater and can be attached to a fixed dock or pier to save space in some cases. The screens can be designed so circulation and currents can still pass through the structure, thus reducing the potential environmental concerns associated with a fixed breakwater.

“Most regulatory agencies prefer, or require, a gap between the bottom of the wall and the mudline,” said Heath Hansell, a coastal/marina engineer with ATM. He worked on a wave screen project in Bay St. Louis, Mississippi. “This can promote flushing, minimize potential ‘trapping’ of marine species, or address potential sedimentation or scour issues.” A two-foot gap at the bottom was required for the Bay St. Louis project. Hansell said such a requirement may not exist in all situations, but it can have significant impact on the screen performance, design and construction methods.

Construction and Maintenance
Wave screens are custom designed based on the site conditions, available materials, and the resulting wave forces on the structure. “It’s never a one-size fits all,” Mason said.

The screens may be designed as all-timber; steel piles and framing with timber, concrete or steel panels; or all concrete king piles and panels. “Historically, timber was probably the material of choice due to its cost and availability, and relatively ease of handling,” Mason said. “We have seen the synthetic materials, such as vinyl and FRP becoming more prevalent, as an alternate to timber for the panels. When wave loads and water depth increases, then we get into the concrete and steel options since the other materials may not be able to withstand the loading.”

Wave screens require the typical maintenance for structures exposed to marine conditions. Corrosion of fasteners, decay of wood, and steel or concrete corrosion from seawater exposure are factors to consider. With steel, it is usually coated and would require re-coating after 10 to 15 years, unless cathodic protection is used below water to reduce corrosion. However, cathodic protection cannot be used above water and in the splash zone, which is where it is most concentrated.

“We’ve seen older concrete wave screens where over time the fasteners corrode away and then the panels fall down to the bottom and become ineffective,” Mason said. “Thus, periodic inspection and replacement of fasteners is important.”

While wave screens can be used to attenuate longer wave periods than floating attenuators, Mason said, the structure will have limits based on the wave force, which acts on the wave screen. Additionally, because wave screens are generally vertical structures, they will reflect more wave energy back toward the wave source than dissipative options, such as a rubble mound breakwater, and that may impact nearby navigation channels. Another potential con associated with a wave screen is that it may be less visually attractive, since it is a fixed structure and may block views from the basin, especially at low tide. 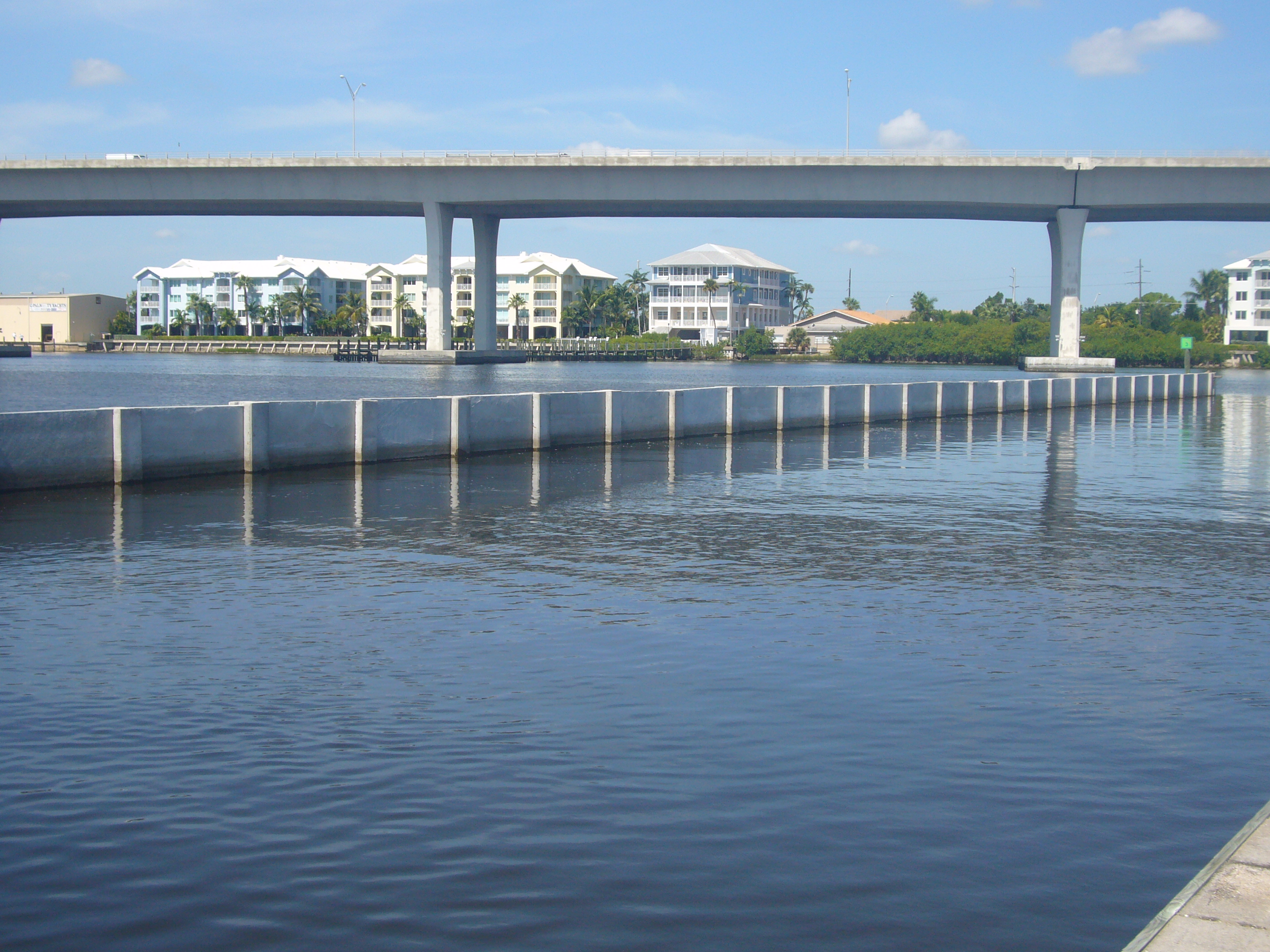 The original floating attenuator at Loggerhead Marina in Stuart, Florida, was not enough to prevent damage to docks and the basic protection. A wave screen was installed around the perimeter of the basin.

Loggerhead Marina
At the Loggerhead Marina in Stuart, a 7-mile wind fetch allowed for large wind-generated waves to impact the site. The original construction included a floating attenuator, however, it was not adequate to handle the conditions that occurred regularly and especially during storm conditions. “The existing attenuator and the docks it was designed to protect were being damaged on a regular basis,” said Pete Peterson, senior coastal/oceanic engineer. “The new wave screen/wall was designed to alleviate this condition.”

The screen at Loggerhead is all concrete and was constructed using a standard pre-fabricated king pile and panel system made at a local concrete fabrication yard. The panels were installed between the piles every 8 feet using a barge around the perimeter of the basin.

Permitting took about six months, during which time ATM continued working on the design. The screen was installed in five months with the goal of being ready for hurricane season. It was completed in 2015.

The screen was put to the test during Hurricane Irma in September 2017. “If the wall was not in place before Irma, it is likely that the entire marina would have been severely damaged and possibly completely destroyed,” Peterson said.

The screen received minimal damage during the storm, primarily the slight settlement of some of the panels, but Peterson said that did not affect the performance of the wall. “The wave screen provided superior wind wave protection, and even though it was overtopped during Hurricane Irma, it provided enough protection to allow the floating docks behind the wall to survive with minimal damage.”

In hurricane-prone areas, screens must be designed to protect the basin for both operational and storm conditions. “We designed the wall to be overtopped during extreme storms so as to not experience catastrophic damage to the wall itself,” Peterson said. 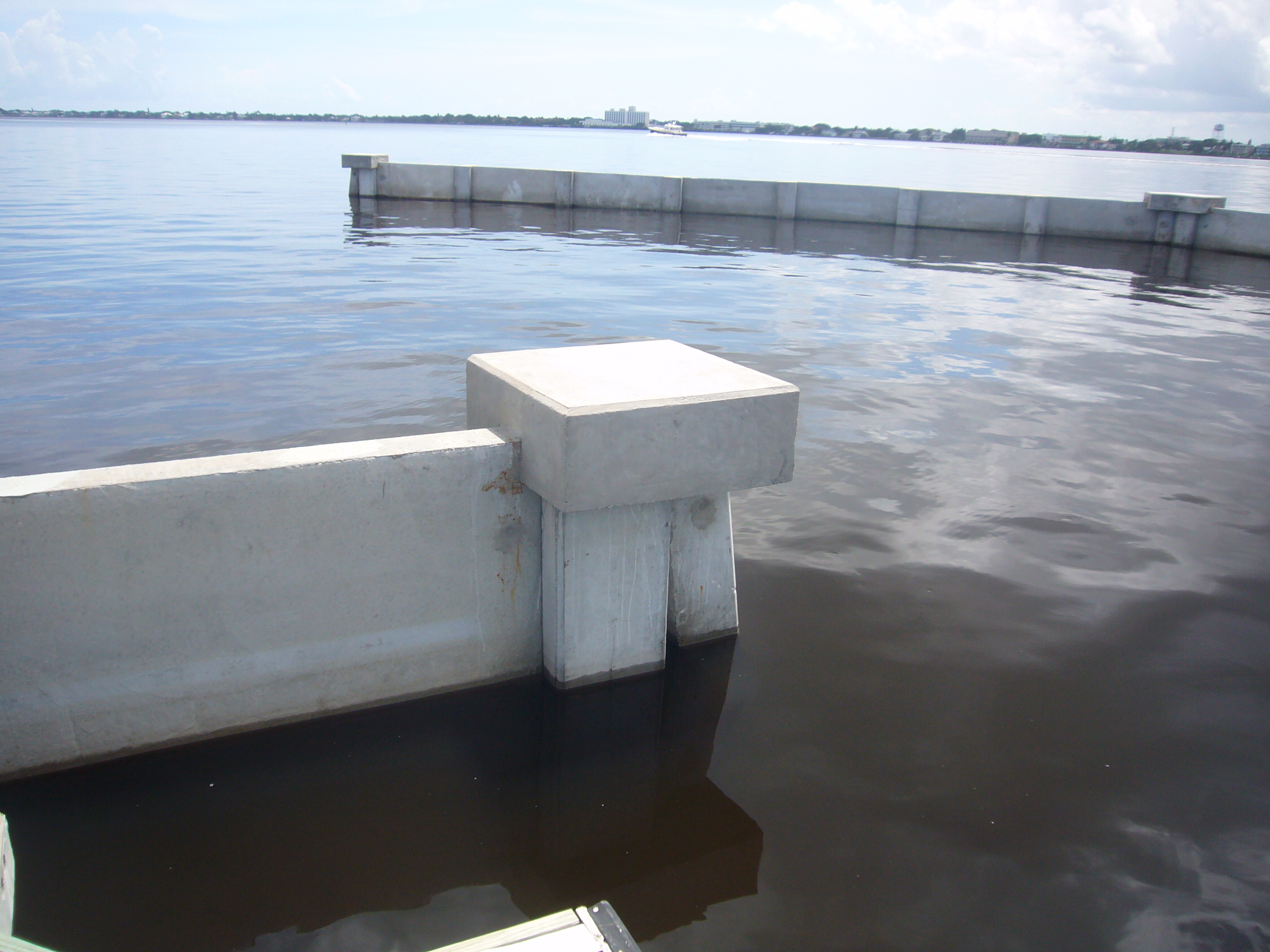 The screen was all concrete and built using a standard pre-fabricated king pile and panel system.

The marina is built out from open shoreline and is exposed on three sides. Due to regulations during the original construction, vertical walls were used on the perimeter structures and the upland interface was a vertical bulkhead. There are also random holes just below the water line in the perimeter structure that were required for flushing and to reduce potential for biological trapping. Hansell said the entrance width was set to a typical minimum distance, but wave energy was still finding its way in. “The entrance was relatively exposed to varying wave energy from differing directions. Once inside, the vertical walls reflected most of the energy back and forth.”

ATM’s analysis showed southerly wind waves of more than three seconds were penetrating the entrance. Hansell said they investigated options other than the wave screen such as interior floating docks, rock cribbing, and other methods that could dampen the wave energy inside the marina. “At the end of the day, it’s best to never let waves in to begin with,” he said.

The screen was constructed using pre-stressed concrete cylinder piles and vinyl panels placed between timber walers. Hansell said after the piles were driven, the contractor came up with a creative method of constructing entire panels on a barge and then lifting/installing the panels with just the few connections between the walers and piles. Custom metal hardware and bracketry was fabricated and used by the contractor.

Construction took about a month due to the small area, only about 170 linear feet. However, the entire process — from the initial investigation and coastal analysis, to designing, securing funding, permitting and bidding — took about two years and was completed in 2016.

“This project was especially important since it was a somewhat ‘high profile’ one in my small hometown,” Hansell said. “If I screwed up, I might not be going home for a while.”

Harbormaster Chuck Fortin said the wave screen has been in place for one year and is working as designed. “The difference it made has delighted the slip holders and those who were hesitant to come in due to the  wave action are now leasing slips.”