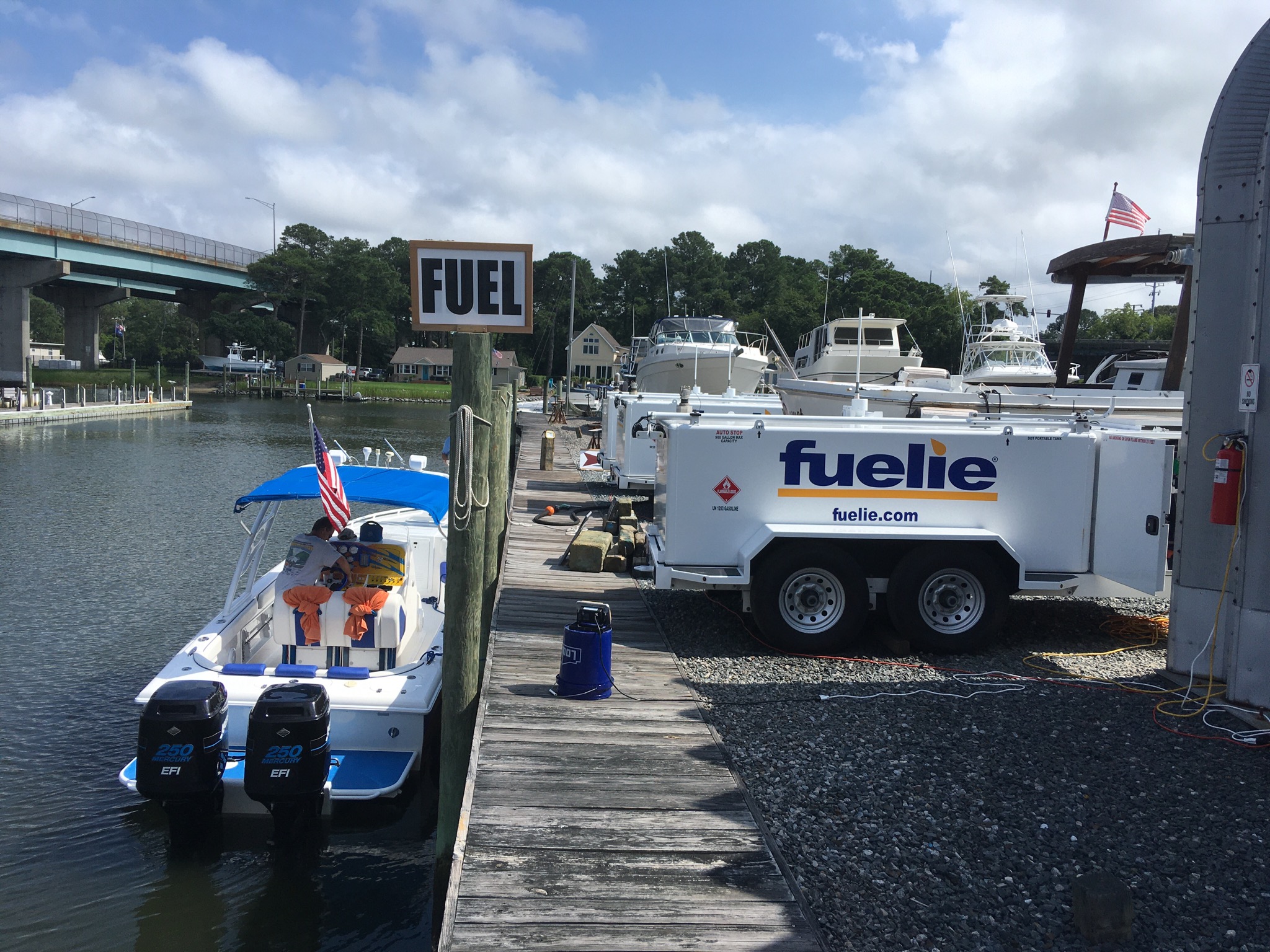 An Easier Way to Sell Fuel

Do you watch your customers load up their boat and leave your marina just to drive down the river to purchase their fuel, ice, bait and other profitable sundries from your competitors? Finally, there may be a way to solve that issue without going through the expense of large permanent fuel tanks and unmanageable EPA regulations.

Fueling Goes Mobile
Austin Capps of Capps Boatworks in Virginia Beach has found a way to bring a technology from the aircraft industry to the marine industry. In a joint venture with FUELIE Systems out of Chapel Hill, North Carolina, Austin is looking to bring the mobile fueling station from the airport, to the marina. FUELIE Systems was created from the need to have fuel more mobile and accessible during disaster situations. The FUELIE product line includes full size tankers, mid-sized trailers and smaller portable pods for both fuel and water delivery.

The FUELIE trailer fuel systems were originally designed to refuel helicopters working in rural areas where it was uneconomical to stop work and fly all the way back to an airport just to refuel. The fuel trailers were hauled behind a pickup truck out to where they were working on pipelines, rigs, towers and other rural industrial operations. The fuel trailers are self-sufficient with their own pumps, solar power to run the pump, and internal generators to run the pump at high capacity or charge the battery. The fuel trailers were designed for use by the military and for disaster response teams, but they are also valuable for agriculture, fleet services, emergency generators and now marinas. “The most valuable aspect of the trailer is that it can be towed, fully loaded, behind a light duty truck without the requirement for a commercial driver’s license. There is no other trailer in this class that can say that. The aerospace grade filtration system and telemetrics package are a close second that make this the most capable tank trailer on the market,” Austin said.

Capps Boatworks is a small boatyard and marina that focuses on repairs and custom-building sports fishing boats, but they are also located on a highly trafficked boat channel. Capps currently has eight mobile trailers that provide 900 gallons of fuel each for their new fueling dock. The different trailers provide two grades of gasoline and diesel to allow them to service a variety of customer needs. Capps gets their fuel through a contract with a local fuel distributor. Trailers can be refilled right on site by a local fuel distributor and it usually only takes about 20 minutes. Unfortunately, because of the Clean Air Act and Capps’ location in a metropolitan area, the EPA requires ethanol to be added to all fuel in metropolitan areas, so they are required to sell ethanol laced fuel. The good news is that the FUELIE system can even help mitigate some of the ethanol issues in the fuel.

Modern Benefits
There are a lot of great features about these trailers but probably the most impressive is the filtration system. A typical fuel dock has a 30 micron filtration system and because the in-ground storage tanks are so large, they tend to collect contaminants and water in the fuel, which then gets pumped right into the customer’s boat. Because FUELIE comes from the aviation industry where clean fuel is critical, the FUELIE filtration system double filters the fuel down to a 2 micron level. At the 2 micron level, the filtration system takes out the organic particles and the coalescing filter removes 99.9% of the water that comes from the ethanol that has been added to the gas. Marina operators can supply super clean fuel to customers, right at the marina, at the same price as competitors.

The pumps run all the fuel through a certified meter. Pricing is completed through a mobile application, which calculates the price and handles the customer payment. The set up includes card readers that plug into the headphone jack or the charging port of a mobile phone. FUELIE is set up to be a cloud enabled fuel provider as the pumps can be activated by wireless remote and the trailers are set up with telemetrics to monitor their location, fuel level and individual equipment users.

For now, Capps Boatworks is the first location where this technology is being tested for retail sales with the marine industry. Austin’s goal is to eventually be able to provide this technology to marinas around the county that cannot afford the high cost of permanent tanks. “I would like to see FUELIE in more marine applications because it solves the dirty fuel issues which have plagued the industry for the past decade. As engine manufactures work to comply with environmental regulation and meet customer demand for performance, the need for clean fuel will become even stronger,” he said.

There are still some required regulatory issues in each locale, but compared to installing tanks, they are very manageable. Depending on where you are in the county, most marinas, by zoning are allowed to sell fuel. For example, in Virginia Beach a conditional use permit is all that is required. Because of their volume, the trailers fall under the threshold for regulation by the EPA. In Virginia they are regulated by the Department of Transportation. Again, depending on location there will likely be some fire code regulations to be met and insurance will likely need to be increased to cover the fire hazard and potential environmental issues.

For a marina operator there are many upsides to selling fuel. The profit margins are typically strong and the more fuel that is sold, the better the margins. Providing the fueling service may bring in customers who might not have stopped before and the additional sales can be a nice boost to the bottom line. Once customers are fueling, the opportunity for additional items like ice, snacks, bait and tackle increases dramatically. “FUELIE has added a viable revenue stream at Capps Boatworks. It has improved the service package that we offer to our customers and it has generated new traffic through our location,” Austin said.

Right now, the availability of these FUELIE trailer systems is limited but for additional information Austin directly at Austin@fueliesystems.com.

Jonathan Guion manages Coastal Marina Sales, which assists buyers and sellers of marinas and commercial waterfront properties in the Mid-Atlantic region. He can be reached at JG.CoastalMarinaSales@gmail.com