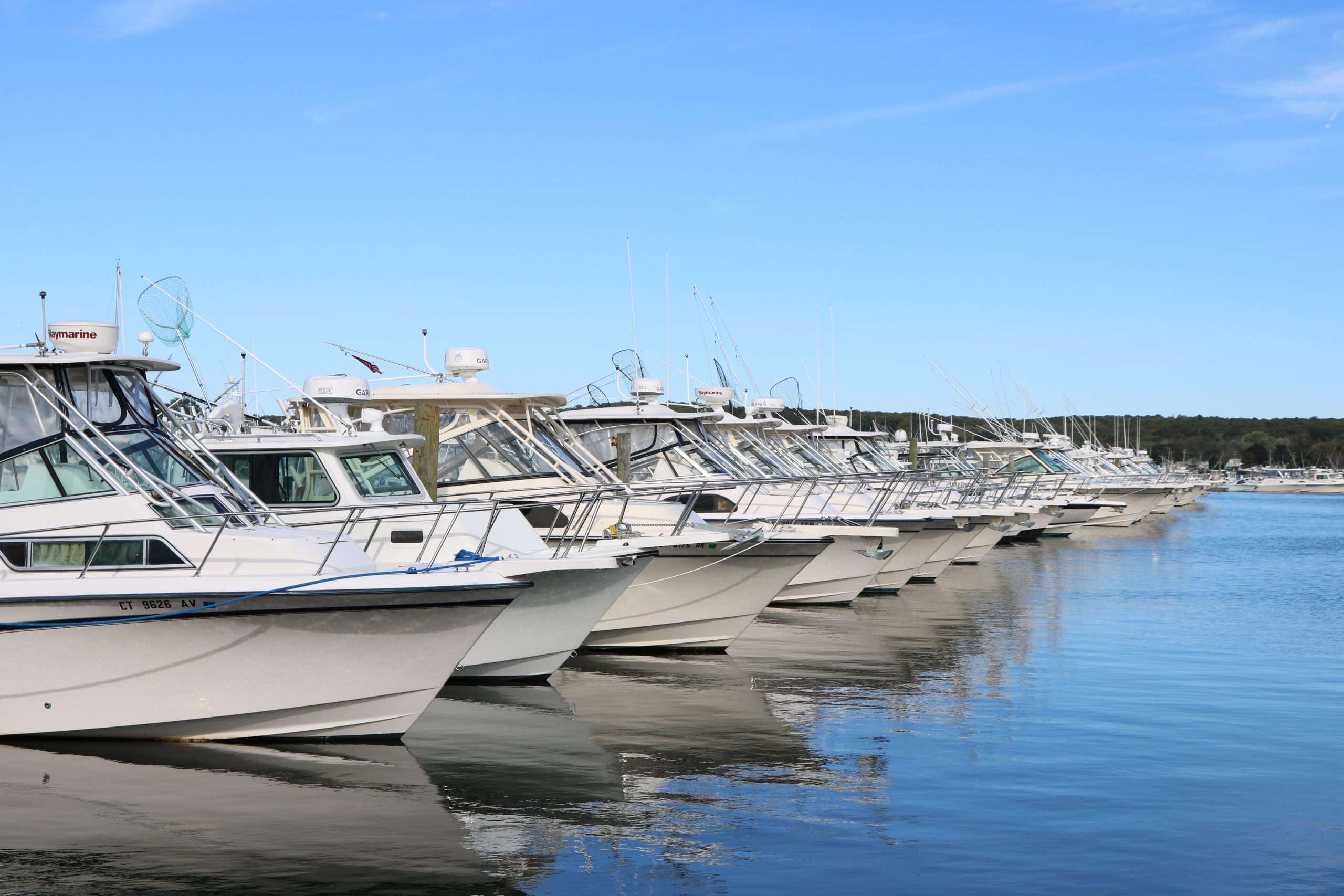 In March and April, marine retailers braced for a COVID-19 induced downturn in sales that some thought would hit like the last recession. Workers were furloughed, meetings canceled, and inventory replenishment curtailed. Then, nearly as quickly as lock downs and grim predictions hit, there was a boating boom that few saw coming. The whiplash of the last several months has posed challenges, but left dealers cautiously optimistic about the future of boating.

There is no playbook for the arrival of COVID-19. “There was no class in college on what to do during a pandemic. There was lots of uncertainty on how to keep things running. My first thought was the industry would suffer since any economic downturn hits us,” Jason LeFevre, general manager of MarineMax Sarasota in Florida said. He explained that employees were furloughed, and remaining staff was moved to work remotely or under strict social distancing and hand washing rules. “We wanted to react, but not overreact. We doubled cleaning efforts and put our boat detailers to work cleaning the buildings. Purell was everywhere.”

Safety practices have not ended. LeFevre says his team members wear face coverings and rubber gloves, only 10 people are admitted at one time to the

sales building, and in the launch area boating parties are told to maintain 12 feet of distance between them. MarineMax has 365 dryrack slips so it was also important to implement safety changes there as well as in sales. “Early on we stopped doing canvas work and our team didn’t get on the boats unless it was absolutely necessary. People in the launch area have to walk in only one direction and our two huge trucks are cleaned three to four times a day and only driven by the same two drivers,” LeFevre said. “We spend a lot of money on cleaning supplies and we will for a long time to come.”

Brick and mortar sales turned virtual, but most dealers were already experiencing the phenomena of the Internet age when buyers have done their research and know what they want before they talk to a dealer. When walk-ins turned to appointment only meetings, most sales staff knew a sale had already been made and they were just there to finalize the details, details which turned to how boaters should visit launch ramps and marinas to maintain six feet of distance between other boaters and lower their risk of exposure to COVID-19.

In response to boat sales turning away from face to face and towards online selling, the Marine Retailers Association of America (MRAA), which traditionally educates its dealer members on how to run their businesses and satisfy customers, switched its educational focus and webinar sessions to technology and protocols on things like how to text, or how to determine what method of communication works best for each prospect. “We found that dealers that were up to speed on the latest technology did very well early on with the changes,” Matt Gruhn, president of MRAA said.

But even with a tech-savvy staff, dealers still struggled early on. Don McKenzie, president of Boats Inc. in Connecticut said March and April were really challenging for his business as they were initially shut down completely. “No one was ordering boats. The pipeline was shut down,” he said.

Booming Business
But just as suddenly as COVID-19 stopped boat sales in its tracks, the wind changed direction.

“All of a sudden we get a massive boom in business. We usually have 50-60 units for sale at any given time, now I have three. Anything out of the factory is sold immediately. We’re suddenly drinking water out of a fire hose,” LeFevre said. He is shocked at the pace of business and said he is breaking sales records each month and barely keeping up with deliveries.

Gruhn said he heard stories of dealers seeing sales up 300% for the month of May and then they were completely sold out in June. “Leads are up 400% and customers are fighting over boats. It’s crazy,” Gruhn said. “What we’re seeing is customers are identifying boating as a preferred way to spend family time and to socially and physically distance themselves, maybe even mentally distance themselves from all that’s happening in the world,” he said.

McKenzie said in May sales started to pick up and in June when his marina and showroom were allowed to reopen he started to see an influx of people who had cancelled vacations and been sitting home, who were now anxious to find a way to get back out in the world. From late June into July they sold the boats in stock and had customers ordering more and more.

As with the boating season, the surge in sales flowed through the country following the weather. The south was the first area to see a boat buying frenzy and as temperatures warmed the buyers in the northeast and Midwest started to come out in full force.

While more boat sales is good news, there is some frustration. During lock downs, manufacturers were shutdown so in some instances there is limited inventory to fill the need. Parts manufacturers also were closed so accessories, such as electronics and even boat lines have been difficult to keep in stock. “Basic parts that used to be in in 24 hours now can take three to four weeks. Everything is back ordered,” LeFevre said.

McKenzie said it is challenging finding any acrylic parts, such as for windshields, because the factories were repurposed to build the partitions that are now at checkout counters in every store. “Bilge pumps, wiring, compasses, all the finishing touches are hard to come by so that’s really limiting our sales now. Customers are used to Amazon’s immediate delivery so they don’t understand having to wait for electronics or bottom paint, before they get their boat,” he said, emphasizing that manufacturers should take a tip from the automobile industry and accessorize boats at the point of production, instead of doing after-sales.

Another challenge, says Gruhn, is that the customer experience is falling short. “Dealers have more leads than they can handle and don’t have time and staff to do good follow up and make sure customers are taken care of,” he said. MRAA plans to put more educational focus on customer service in upcoming webinars. “The customer experience drives loyalty and referrals and helps keep people in boating. Dealers right now need help taking care of their customers.”

New Normal
Scott Leahy, CEO of Boats Inc. says they are doing what they can to keep

some sense of normalcy. They held their annual King of the Dock fishing tournament in August,

although with some tweaks. There wasn’t a dinner with live music and the event was spread over two days to allow better distancing of the boaters on the 60 to 75 boats that the tournament attracts. But the goal of offering families an exciting event on the water, and new boaters a way to experience boating and fishing, wasn’t lost.

Leahy points out that boating and fishing is one of the only ways to get his 13-year old away from the Xbox. Gruhn concurs, saying this is the first year in as long as he remembers that his daughters have asked him to take them fishing. LeFevre is also seeing that kids will leave their phones, which are usually an extra appendage, in the car when they head out on a boat.

Getting the younger generation excited about boating is welcome news for the marine industry, which has seen the age of boaters climb more and more each year as travel teams, video games, and interests in more physical activities replace spending a day in a boat with a line in the water. With sports canceled and traditional summer outings to theme parks and movie theaters shut down, getting on the water has jumped in appeal. “We are introducing people and especially kids to boating. It’s a true family activity. We are planting a lot of seeds in the younger generation,” Leahy said.

Asked whether they believed the boating surge would continue or as regular activities and attractions return would people abandon time on the water, there was a mix of optimism and caution.

“There will be some who have a knee jerk reaction, kind of like the SUV craze in other years. They bought SUV’s because their friends had them, then realized the gas mileage was bad and the car was too big so they traded it in. Boating won’t be for everyone,” McKenzie said.

Leahy emphasized that his 175-slip marina is at full capacity now, as are most of the ones he knows. He said moorings too are completely booked. More boats can be sold, but people will need a place to store them. As marinas max out on storage, boaters may become frustrated if they have to sit on a waiting list, trailer, or look for storage far from home.

LeFevre retains a more optimistic view. “I don’t really see a slowdown. Boating is such a unique hobby, that I think people were just not into it because they never really tried it. We have sold more in past three months to first-time buyers than we normally do in a year. We’re breeding a whole new boater. I think it will help the marine business dramatically.”