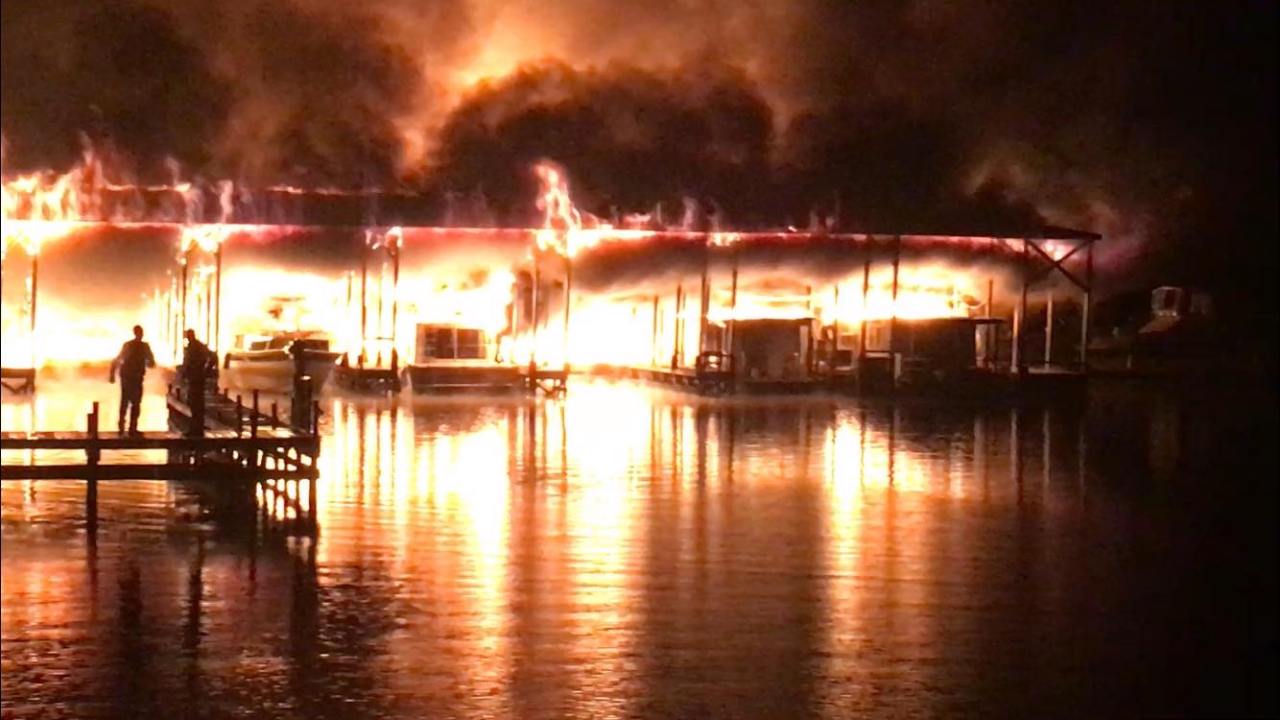 A marina fire in Scottsboro, Alabama, earlier this year illustrated how such a situation can turn tragic in just minutes.

At 12:35 a.m. on January 27, 2020, a man living aboard a houseboat at Jackson County Park Marina awoke to a “popping” sound and smoke filled the cabin. According to the report from the National Transportation Safety Board, the owner told investigators he saw flames coming from the forward bulkhead near the vessel’s electrical panel.

He emptied his fire extinguisher on the flames then went to the neighbor’s boat to get another extinguisher. When he returned to his boat the fire had grown and using the second extinguisher had little effect on the fire.
The boat owner called 911 at 12:38 a.m. When Scottsboro police officers arrived seven minutes later, they reported the whole dock was on fire. The fire department arrived four minutes later. “Within 10-12 minutes every boat under the dock was somehow involved,” said Scottsboro Fire Department Chief Gene Necklaus.

The fire consumed the wooden dock and supports causing the metal roof to collapse. Some boats drifted away due to the mooring lines melting, others burned to the waterline and sank in their slips. An estimated 4,000 gallons of fuel and lube oil was released and consumed during the fire. The fire completely destroyed the dock and 35 boats resulting in $500,000 in damages.

But the greater loss was that of human lives. “It was horrible. Tragic,” said Necklaus.

Escaping the Fire
The boat owner and another marina occupant tried to disconnect the burning boat from the electrical cables and potable water hose so they could push it away from the other boats. However, the owner struggled with disconnecting the water hose, and the fire grew so fast they couldn’t move the boat.

The fire quickly spread to the surrounding wooden dock. The boat was moored in the first slip on the shore side, thus preventing the other marina occupants from escaping. There were 17 people on the dock at the time of the fire. Some considered trying to fight the fire using the portable fire extinguishers on the docks. According to the NTSB report, one individual said, “the fire was so hot, so massive that I knew the fire extinguisher wouldn’t do a thing.”

One person escaped in a kayak and paddled safely to shore. The remaining 16 people untied two boats near the end of the dock in an attempt to flee the fire. Because they could not start the boats, they used folding chairs and wash brushes to paddle the boats. They could not reach shore or another dock and were eventually drawn back to the burning dock by what some survivors called a “fire-induced draft or vortex.”

Meanwhile, the fire had spread to other boats and with the mooring lines melted, the boats began drifting away from the dock. The burning boats collided with the two boats the evacuees had used, catching those vessels on fire as well. Nine people jumped into the water. None of them had life jackets. Eight were able to swim safely to shore. First responders treated the survivors for exposure and burns on the scene, and seven survivors with more serious injuries were transported to a local hospital. One person who jumped from the burning boats drowned. Trapped on a burning cabin cruiser were five children, their mother and another woman. They all perished in the fire. The NTSB report stated all the victims were recovered once daylight broke.

Fire Safety and Prevention
The state classified the marina fire as accidental. The National Transportation Safety Board report stated the origin of the fire could not be determined “due to all the combustible material being consumed by the fire.” However, based on the owner’s statement, it is believed to have started between the boat’s electrical panel and storage closet. The NTSB report also noted the county and marina’s limited fire safety practices contributed to the severity of the fire and loss of life.

Grills and portable propane tanks, rugs, plastic chairs, table sets and other combustible material stored on the dock space at each slip and the boat decks increased the dock’s fire load.

Alabama’s fire code includes a section pertaining to fire safety standards related to marinas and boatyards, however the regulations did not apply to the dock where the fire started because it was built before the adoption of the fire code.

The lack of codes or being grandfathered in under older requirements should not prevent marina operators from taking basic safety precautions. “Marinas should have measures and guidelines in place to prevent and mitigate accidents for all moored boats and their occupants,” the NTSB report stated.

Chief Necklaus said fighting a fire on water puts the firefighters at a disadvantage because they can’t maneuver around the fire and structure like they can on land. Also, the interior walls of a structure can help firefighters contain the fire to one area. But a dock doesn’t have any barriers to help slow the fire. “It’s a different dynamic fighting fire around water,” Necklaus said.

The chief said it would be helpful if covered docks were built with a venting system or plastic or plexiglass panels in the roof. “The heat will melt the plastic and allow the fire to go vertically and slow down the spread.” In the case of the January fire, he said, “All the heat contained under the roof sped up how fast the fire spread.”

He also thinks the installation of mechanical alarms or sirens would be a good idea, especially in marinas where there are permanent occupants or people staying overnight. “Some means of alerting people, so people wake up and take some sort of action is very important.”

“We never really focused on smoke alarms in those situations like we do in houses,” he said. “That’s one thing that can help. Early intervention can help.”
Melanie Ashby, vice president of business development at MariCorp agrees. “It’s the old saying, ‘An ounce of prevention.’”

She remembered reading about the Scottsboro fire in January and thinking it would be a good idea to convene a roundtable to talk about marina design and how it relates to keeping people safe in the event of a fire.

MariCorp is a manufacturing and construction firm that specializes in floating dock systems. Ashby said many of the covered docks they install include venting at the top of the roof panels. The firm has also installed some roofs with combustible panels such as those Chief Necklaus suggested. Ashby said another benefit of the panels is that they let more light into the docks.

When designing and installing new docks, marinas and their contractors should consider local and national fire codes, electrical needs, and fuel safety measures. “If you can get electrical and fuel right, you will go a long way in fire prevention,” Ashby said.

Automatic shut-off valves are required on fuel docks. “That is invaluable,” said Ashby, adding that she frequently reads about marina fires that occur during or after someone has fueled their boat.

Necklaus and Ashby both emphasize the importance of annual inspections to ensure operating systems are working correctly. “Inspections of all fuel-dispensing equipment is really important,” Ashby said. “And daily inspection of the fuel-dispensing nozzle.”

Some other safety considerations Ashby lists include:
• What options are available for extinguishing a fire? Some of the docks MariCorp designs include a dry-stand pipe system that pulls water directly from the lake. Some facilities have fire hoses available on the docks; the fire department can also connect to the system.
• The location and storage of fire-fighting equipment. A good rule of thumb is to have a fire extinguisher available not more than 75 feet away from any vessel.
• Local environmental factors that would contribute to the spread of a fire, such as prevailing winds from the west.
• Options for containing a fire, such as removable gangways, and minimizing damage.
• Plenty of night-time illumination so people can find their life jackets and fire extinguishers.
• How will marina members and staff get off the docks in the event of a fire?
• How will firefighters get on the docks?
• Designation of an emergency staging area for firefighters, first responders and EMTs treating people with injuries.

The National Water Safety Congress suggests a safety skiff should be available and ready to use in the event of a fire. The skiff could be used as a tow vessel to move a burning vessel to open water and away from other boats or structures. It could also be used by marina staff and emergency personnel to transport occupants from a burning dock. Necklaus said inflatable rafts stored on the docks could be helpful and give people a means to escape.

Ashby recommends marina operators work with their local fire departments. “They can inspect the property and give you ideas to improve safety.” She also suggests working with local leaders who might be able to help secure local funding or grant money to buy fire-fighting equipment.

Chief Necklaus said when the Jackson County Park Marina fire occurred his department did not have a fire-fighting boat, and they had to wait for a boat from another department. His department has since purchased a fire boat and has been training with it.

Necklaus also said the fire department is working with another marina in his fire district. “We are very involved and being proactive in developing future plans.”

Ashby acknowledges that sometimes you can take all the preventive measures, but accidents happen, and people need to know what to do in the event of a fire. “I can’t emphasize enough to do regular fire drills. Drills are invaluable and training is even more important,” she said. She suggests routinely reviewing a fire safety checklist.

The local fire department can participate in drills and help train the staff on what to do in the event of a fire. “You want good communication with the fire department, marina management and tenants,” Necklaus said.