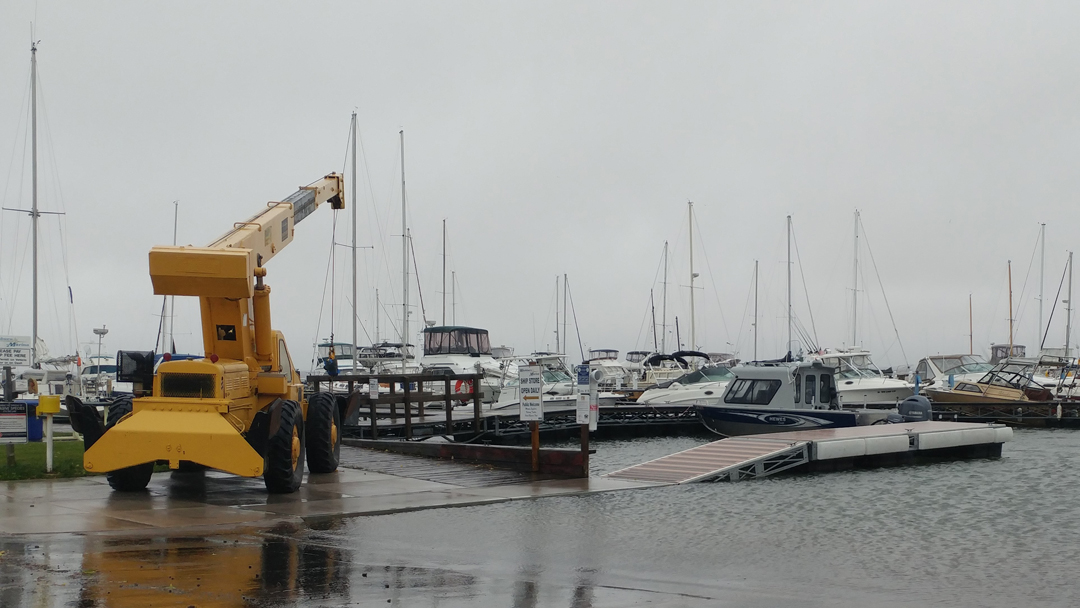 Part one of this article (in the MDA Jan/Feb 2020 issue) examined how Great Lakes water levels are approaching heights that are unprecedented in their recorded history – and how quickly this occurred after they equaled their historic lows. This is posing major challenges to shoreline protection and infrastructure – as well as to long-held beliefs about how Great Lakes water levels are supposed to change over time.

For the past several decades, many communities around the Great Lakes viewed the oscillations in lake water levels as predictable and bounded. For example, on Lakes Michigan and Huron, the record monthly low water levels were all set during the 1960s, and the record high water levels occurred in the 1980s. Between these highs and lows were periods of relative stability. While there were still short-term and seasonal changes, a longer-term cycle between known highs and lows was assumed to be the norm.

This is no longer the case. Several monthly record lows were recorded in 2012-13, and it appears almost certain that new monthly record highs will be set in 2020. These rapid fluctuations outside previously established norms challenge the perception that Great Lakes levels will always be within a known range.

Part one of this article series noted how hard it is to move away from a reliance on predictable historical conditions to guide future planning and design decisions. Part two focuses on how some Great Lakes marinas are doing just that, using adaptive decision-making approaches to protect their facilities from increased uncertainty.

Widen Your Options
Introducing uncertainty into any management operation or planning effort can be uncomfortable. Decision makers, whether they be municipal leaders, marina operators or individual boaters, can no longer rely on a predictable set of given boundaries – or the operational and construction standards based on those boundaries. A higher likelihood of exceeding the known design parameters leads to higher risk, which requires new, more robust, and potentially more costly risk mitigation strategies.

Fortunately, the decision-making process provides numerous opportunities to add resilience into management and capital investment activities. While there are many excellent books on the subject, one of the most accessible and useful is Decisive by brothers Dan and Chip Heath. The suggestions they offer are bookended by a directive to “widen your options” and the sensible counsel to “prepare to be wrong.” The book has other excellent guidance, but following these two suggestions can help increase a marina’s flexibility in the face of uncertainty.

Scott Stevenson, executive vice president of Westrec Marinas, acknowledges that the recorded data on Great Lakes water levels from the past 100 years are still his first guide to decision-making. He is hoping to see lake levels revert toward their historical mean, but if he sees a few more years of unprecedented highs, he will have to consider changing his operating philosophy. In the meantime, Stevenson, who runs the Chicago Harbor system’s marinas as a concessionaire for the Chicago Park District, is widening his options – deploying ever more creative means of adapting to the difficult conditions.

One example is the accessibility platforms his team installed at the harbors where water levels have repeatedly encroached over the top of the promenades leading to the slips. This simple fix allows all boaters to access the facility. It is a relatively low-cost method of improving the range of operating conditions he can provide to his customers and user groups, which include the Judd Goldman Adaptive Sailing Program.

Stevenson recognizes that his management issues are not restricted to monthly high-water levels. His facilities have experienced more extreme storms, which are resulting in more destructive wave events. He has also seen an increase in the frequency of seiches – sudden water-level fluctuations on inland lakes caused by extreme wind conditions and changes in atmospheric pressure. An October 2019 storm on Lake Michigan produced a 2-foot seiche, which Stevenson described as “the worst I’ve seen during the boating season in 25 years on the Great Lakes.” That event flooded parking lots, promenades and access, and threatened transformers.

In response, Westrec is instituting floodproofing measures. These include raising transformers, replacing the last remaining fixed docks in the system, and making further modifications, such as extending the height of the mooring piles to increase the range of the floating docks. They are also modifying gangways by installing hinges to keep the access to boats horizontal when water levels are high.

This relatively low-cost approach to a pressing problem has also changed Stevenson’s thinking about when to widen his options for accommodating water-level changes. In 2012, when Chicago added the state-of-the-art 31st Street Harbor to its system, the city considered including gangway hinges but ultimately left them out. Stevenson says that while that seemed to be a good idea at the time, given the exceedingly low water levels that were prevalent then, he would add hinges every time in the future. Having worked out a way to retrofit gangways for about $3,000 apiece, he’s also more than willing to share that knowledge.

Widening the range of options being considered, either at the beginning of a planning effort or in response to an emergency, often leads to increased resilience. Even adding a single new idea to the possibilities under consideration can open the door to further creativity. This kind of creativity and vigilance are in strong supply at Washburn Marina on Lake Superior in Wisconsin. As General Manager Michelle Shrider notes, “We thought we were immune to high/low water and related storm issues, but we are becoming abundantly aware this is not the case.”

One key change that Washburn has made is to implement daily inspections along with a rapid reaction mentality. They have experienced regular flooding into their (supposedly water-tight) fuel sensor manholes on a regular basis; this causes the alarms to go off and requires frequent monitoring. Another impact from extreme high-water levels has been damage to the ramp-to-pier pins on some of the piers. Shrider hopes that changing the pins from aluminum to nylon will add sufficient flexibility to withstand the conditions.

Additionally, in the past three seasons the marina has experienced unusually high seiches that cause the approach ramps to the piers to jump off the binwall base, sometimes suspended only by the utility conduit. As a stopgap measure, the marina has been holding these ramps up with a crane until the water recedes and the risk for damage passes.

Prepare to be Wrong
The second piece of advice from Decisive – “prepare to be wrong” – is particularly appropriate for the boating community, where mistakes and lack of preparation on the water can lead to serious harm. Preparing to be wrong requires challenging assumptions. In the case of water levels, that means challenging the notion that there are fixed, predictable high and low water levels, and that the risk of anything occurring outside those parameters is too low to plan for.

This is a consideration that Shrider is taking seriously as she plans to deal with the utility conduit issues at Washburn Marina. The long-term fix, which she said “will consider high and low water levels in the future,” is extensive and will take time to complete. In the meantime, she’s enacting a stop gap emergency repair to keep the metal conduit connectors from rubbing on the electrical cables inside. This winter, with the utility conduit on all three piers draped in the water, she has installed aerators at the head of each pier to keep ice from forming around and pulling on the conduit.

Demonstrating resilience in action, Shrider’s long-term improvements will include a new conduit that will be far more flexible with additional give. Instead of hanging down toward the water with the additional slack, a bracketing system will be installed that keeps the conduit above high water, while allowing it to go down with the dock system during low water events.

Thinking through possible failure scenarios can lead to better contingency plans, emergency response protocols, and long-term operating standards. One important way to prepare for the risks of future failure is to regularly review and update a marina’s insurance policy. In cases where the default language will only cover in-kind replacement and repair of a facility, it might be necessary to amend the policy to cover new protection measures and provide a more resilient safety net. (See the article in the MDA March 2018 issue, The Role of Insurance in Marina Risk Management.)

Frequent communication with and education of the boating community is a key tool in Stevenson’s and Westrec’s toolbox for managing uncertain conditions. Stevenson is a passionate advocate for getting the word out, both to educate his customers and to educate the wider industry. He realizes that Chicago has made some good decisions in the past; for example, the system has replaced fixed docks with floating docks for more than 4,200 slips in the past 25 years. However, persistent high-water levels pose serious operating concerns.

Three of the 10 harbors Westrec manages for the Chicago Park District require boaters to enter underneath Lake Shore Drive. A few years ago, the clearance at those entrances, which serve approximately 1,000 slips, was about 15 feet. Last summer it was down to less than 9 feet, which meant 200 slips could not be occupied by their renters. If current lake-level projections hold true, the number of boaters who will have to be temporarily housed elsewhere could double. In anticipation, Stevenson is already proactively creating opportunities for other harbors to house the displaced boaters. He is also ramping up a mailing and social media campaign to let customers know their options.

Safety is another topic that is on Stevenson’s mind more than ever. He worries about the backlog of maintenance and upkeep of the federal breakwaters that protect several of Chicago’s harbors. He wants to see Congress step up appropriations for the needed infrastructure repair and is alerting all his customers to the new hazards that they may never have seen before in their lifetimes. He is taking steps to mark submerged (or potentially submerged) hazards within his purview. However, even though Westrec marked the deteriorated Dime Pier outside Monroe Harbor, there have still been more than 20 reported collisions.

Ultimately, Stevenson is optimistic that the marina industry is becoming ever more resilient, and he is keen to play his part. “We need to share resources,” he said, “and we are happy to share with anyone who wants help figuring it out.” His outlook speaks to how managing uncertainty is not a competitive process, but a cooperative one. Industry journals such as this one, conferences and the internet can all be sources of valuable information for addressing the shifting impacts of climate change. Sharing these emerging precedents is the most effective way to generate more, and potentially better, options for adapting to uncertain – and in many cases unprecedented – operating conditions.

Mark Wagstaff is a senior waterfront engineer with SmithGroup. He can be contacted at 312-641-6624 or at mark.wagstaff@smithgroup.com.