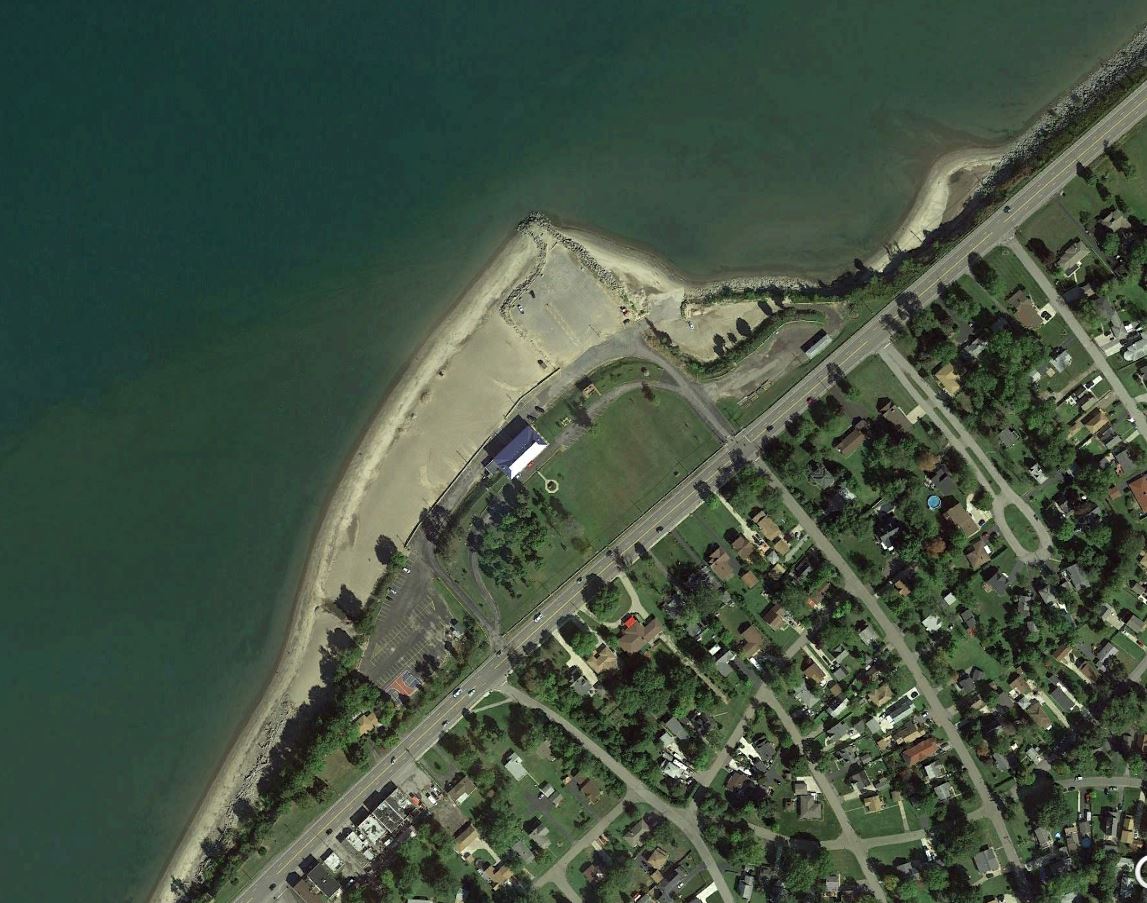 By Jenna Kooker and Ryan Leahy Published on January 17, 2022
Share this...

The Beach Boys sing about the west coast of California, and even Floridians brag about their west coast, but we don’t often think about that third populous state, New York, as having a west coast. Yes, New York has a west coast. In fact, the surrounding coast of Lake Erie is home to over 12 million people, making it the most populated of the Great Lakes. Life on Lake Erie is dictated by its geometry, recognized centuries ago by even the first people who called it “Erielhonan,” the Iroquois word meaning “long tail.” The lake is 800 miles long and 57 miles wide at its widest, but only 210 feet deep. This shape helps bring context to the unique coastal processes that occur there and the challenges to be faced when planning for shoreline improvements and marinas.

What are those unique characteristics that make that coastline such a challenging environment? There are two. First, strong west winds drive waves that move huge volumes of sediment along the coast from west to east. These all want to accumulate at the eastern end of the lake. This makes creating harbor works incredibly challenging by forcing frequent and extensive dredging campaigns. But those same winds, blowing over the shallow lake, cause a second phenomenon, even more challenging in that they cause the lake water surface to tilt as much as eight feet in the Buffalo area. This tilt is like a strong storm surge you more typically see with very strong hurricanes on an ocean coast but can happen much more frequently and destructively. And so begins the story of a plan to regenerate the coastline of Hamburg.

Revitalizing Hamburg’s Shoreline
Hamburg is located in Western New York, 12 miles south of the Buffalo city center on the eastern coast of Lake Erie. The City’s shoreline is a mixture of both residential and commercial properties constantly being battered by the lake. The City recognized that its shoreline was being under-utilized in terms of the potential amenity it was for the community, while at the same time a costly liability due to the frequent storm damage occurring there. The City, therefore, sought creative solutions that could hewn and leverage the raw resource into a valuable amenity and at the same time bring safety to the shore. The targeted revitalization area includes 3.5 miles of coast spanning from Hamburg Beach in Athol Springs area up north to the Woodland area.

The Hamburg community wants a new marina facility and increased public waterfront access. In the spirit of using living shorelines, they want the marina solution to also extend to provide protection to the adjacent shoreline without negatively impacting the aesthetics of the coast. The marina should include adequate parking, a fuel dock, boat launch, transient and seasonal docking. As always, the goal is to make the improvement appealing to non-boatowners too. So, there is a need to incorporate the waterfront access for the whole community, with a restaurant or a beach.

A major issue this shoreline site experiences is large amounts of sediment moving from the south end of the lake to the northeast. This can be prominently seen at Hamburg Beach, where most of the beach’s sand has been “caught” by the jetty over time. This can lead to harbors or marina basins filling with sediment, later needing to be dredged to remain accessible.

Dredging is expensive and can be even more costly if it becomes an annual need because of high amounts of sediment accumulating in a marina basin. Ideally, a site should be designed to not need to be dredged at all.

Protecting the Shore
When designing a marina, you need to first understand the wave conditions the site will receive. After all, the primary objective of a marina is to provide a safe harbor for boats. Wind data is collected from airports, and the Great Lakes are dotted with wave buoys that assist in creating a dataset of recorded waves since the buoy was placed in the water. The longer the data is collected, the more accurate the wave conditions will be. With these measurements of wave heights, periods, and directions, we can calculate the probability of major wave events that could occur at a site. This information is crucial for designing a breakwater that is tall enough and with large enough stones to protect the marina basin behind it.

The primary design consideration is the largest wave that will approach the site. At Hamburg, the highest significant wave height hindcasted is 7.5’ from the west. We must design the marina breakwaters that will be hit by westerly waves to handle waves of this size. But as already pointed out, that is only half of the issue. When a wave occurs from the southwest, the lake also tilts up as much as 8 feet, so to fully protect the coast, wave protection plans also need to account for water levels that are temporarily much higher. Think of the lake as a bathtub. When water is forced to one side, the opposite side loses water.

This phenomenon is known as seiche and can occur in the Great Lakes. In the case of Lake Erie, the location of Hamburg makes it a great target for increased storm surge effect with storms coming from the southwest. In fact, the parking lot at the Hamburg clock tower has partially spilled into the lake after a seiche event this past December.

Like marinas on the East and West coasts of the U.S. must design for tidal changes, our site at Hamburg considers the effects of this phenomenon. Using observations from the National Oceanic and Atmospheric Administration (NOAA) Tides and Currents buoys in Buffalo and the nearby Sturgeon Point, the storm surge for the coast of Hamburg was as high as eight feet for a 50-year storm event with winds from the southwest. This increase in lake level will lead to larger waves reaching the site from this direction.

The case of the seiche will only occur with southwest wind, while the case with the largest significant wave height will occur from west winds. For this reason, we can consider each of these cases separately to avoid being overly conservative, because they will never occur simultaneously. The crest or top of each breakwater will vary in height, depending on the wave height or direction that will be the most severe for each one. This will not only save money but preserve more of the magnificent views of the lake from the shore.

Shifting Sands
The other part of the design challenge is that massive movement of sand along the shore. Remember we said that the sand wants to accumulate right where we want to put our marina? Why not try to use this sediment transport to our advantage? Why not give it a nudge in the right direction and let the sand create some beaches at the end of its transporting journey? That’s what these detached breakwaters, or breakwater islands, are intended to do. They are oriented meticulously so the dominating wave direction will force the sediment behind the breakwater structures, creating a welcoming, sandy beach along the shoreline. Depending on how close the breakwater is to the shoreline, there will either be a crescent-shaped beach reaching the breakwater, or a hump extending from the beach but not all the way to the structure. The waves wrap around the structure, trapping the sediment behind it. Although different wave directions will create various beach shapes behind the structures, the predominant wave directions will form the beach shape. To give the beaches a head start, dredged material from the harbors can be reused to initiate the sand accumulation along the shoreline. Using breakwater islands instead of one long structure is more aesthetically pleasing and cost efficient.

The detached breakwaters accompanying the left marina rely on orienting the islands to redirect the nearshore currents, which modify the sediment transport patterns and result in smaller wave heights for a tranquil marina harbor. The purpose of the breakwater islands between the two marinas is the public beach amenity. The pocket beaches created by the breakwaters maximize the space for the community to enjoy the shoreline. On the other hand, all the breakwater island structures have sustainable benefits too. The way they are built creates a “living shoreline” habitat. The stones are carefully placed to provide shelter for small fish, and beaches created in the breakwater curves allow safe spots for birds to nest. This emulation of natural features integrated into the island breakwater designs provides protection from storms and reduces predatory losses for many species of fish. It is also ideal for fishing in the area, with multiple studies in the Great Lakes finding that these features can increase both fish diversity and density. These habitat improvements counteract the necessary disturbances that occur to the existing sandy bottom habitat while constructing the breakwaters.

If you look closely at the marina element of the design, you may notice some unique aspects of the dockage layout that are also tied to understanding the wave environment. For each of the marinas, you may note that they mimic either a “Christmas tree” or “comb” design versus the more traditional multiple shore attached pier design. One of the main benefits to this design is energy efficiency. Overall, there is less electrical wire usage and potentially less equipment than if there were multiple main piers connecting to land. Also, the boats moored in the slips will experience waves approaching oriented as head seas (waves approaching the bow or stern of the boat) rather than beam seas (waves hitting the boat from the side). This is beneficial because boats are designed to cut across waves, not to travel parallel to a wave crest. It’s also convenient for being social among boatowners, when you are all connected by one main walkway.

This multifaceted design encompasses the goal of storm protection and additional public amenities to improve the Hamburg community and their waterfront. This design illustrates the possibilities for future marina design in the Great Lakes.